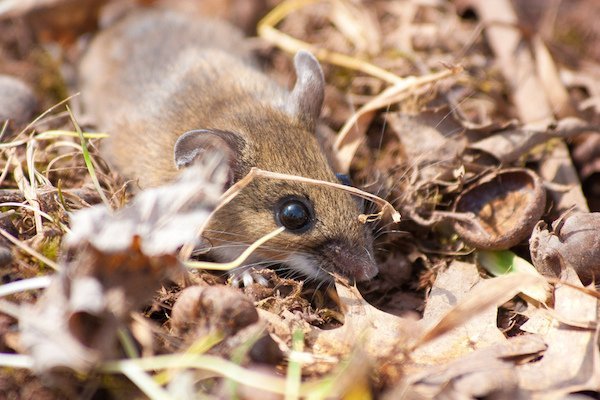 Early one morning a few autumns ago, when long rays of sun were just beginning to light up the fallen leaves, I glanced out the window to spot a tiny flutter on the ground. Grabbing my binoculars, I found a Mouse foraging in the leaf litter. She burrowed and sniffed, nosing here and there, absorbed in her search. Suddenly she pounced. Now animated, she picked up something in her mouth and ran a short distance away. There she set it down, picked it up again, took a bite or two, scurried off in a different direction, nibbled some more, then scurried to a new spot.

I adjusted the binoculars for a clearer look. She was holding between her paws the striped carcass of a Yellow Jacket. It seemed a prize too precious to eat. She continued in this way for some minutes, nibbling and scampering, nibbling and scampering, enjoying her treasure. She reminded me for all the world of our Dog, Bodhi, who gets so excited when handed a bone that at first he can’t stay in one place but dashes around the room, pausing for only a few moments here and there to enjoy it.

That small Mouse depends for her life on the gifts provided by the Earth—in one moment an exoskeleton of a Bee, in the next a scrap of Carrot peel, later a few fallen seeds. It is a humble way to live, an hour-to-hour existence, the very definition of hand-to-mouth. It is not a lifestyle recommended for humans. Working hard and investing for the future are supposed to save us from all that. According to conventional wisdom, a lifetime spent building your retirement account is only prudent. Survival and success are your own responsibility—and your own achievement.

Yet there have been others who suggested a different way—voices who preached the illusion of amassing goods, who recommended instead a radical sharing. I think of young Francis of Assisi ripping off the rich clothes received from his wealthy cloth-merchant father—in the town square, no less—and from that naked day forward preaching that God can be seen most clearly in the faces of the poor. Or Francis’s teacher, Jesus of Nazareth, who recommended going out to the meadow to ponder how the lilies grow: they neither work hard nor spin thread yet are clothed in all sorts of beautiful colors. I think too of millennia of Buddhist monks with their begging bowls, living on the grace of donations, and of the Third Pillar of Islam, which teaches that if you wish to live a faithful life, the next step after prayer is sharing your possessions.

In the tradition I practice, connecting with the Living Spirit, or God or the Creator, takes place by opening the heart to one’s own spirit helper, often a wise animal or tree or other being of nature. It is a path of relationship, of cultivating an awareness of the helper as if a friend at the elbow steadying one’s steps over uneven ground. My spirit helper is Bear, to whose voice I have practiced deep listening over a period of years. And on the theme of survival and success, Bear usually sounds more like those visionary voices than like conventional wisdom. It can be disconcerting.

So Bear was stretching me when, months after that autumn morning, he offered out of the blue, “Be humble as a small Mouse, who knows that every moment is a gift, because every moment one could be snatched for food.” Suddenly I remembered the Mouse, her sheer delight in the gift of a Yellow Jacket. In truth, Bear reminded me, life for human beings is no more secure than for that Mouse. At any moment we too could be struck down. “So,” Bear said, “every moment is a complete gift. Utterly separate from one’s own efforts. It’s all mercy,” he added. 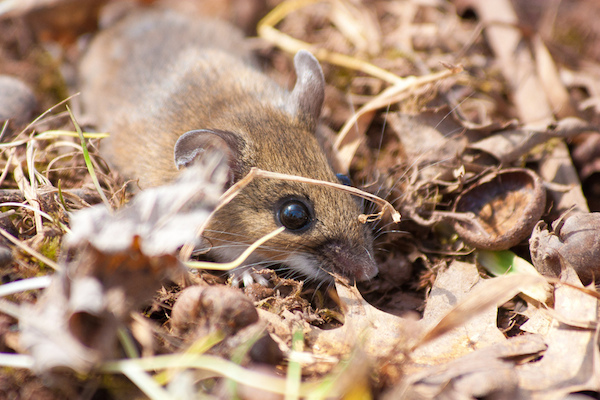 And he was stretching me again when, months after that conversation, he brought up the topic once more. “A person’s success is completely divorced from their efforts,” he repeated.

I still sided with conventional wisdom on this one. If my retirement account didn’t add up to the recommended sum, it was because of risks I’d taken that weren’t exactly prudent.

But Bear was adamant. “It comes down finally to the gift of life itself, which no one can take credit for—not one’s own life, not one’s own conception or one’s own birth. No credit at all!” Then he pointed to the end of life. “The gift of dying, of entering again the unseen worlds. No credit! Beginning of life, a gift. End of life, a gift. Each of them happens no matter what one chooses.”

Then he took it further. “If the beginning and end are utter gifts, having nothing to do with one’s efforts, how can you claim that anything in the middle has to do with your efforts?”

I had no answer for that. He was shredding every scrap of faith I still clung to in the link between striving and reward.

“Success, like life itself, is always a gift,” Bear went on. “And the wiser person will acknowledge the ways in which it arrived regardless of their doing. And will pay their dues by giving thanks.”

My mind was reaching toward the implication, but Bear was already spelling it out: “Only if success is completely a gift can the universe be free of judgmentalism. Return to the gift,” he advised, “to remain free of judgment.” With the words came a feeling of freedom, immense freedom, the kind of freedom that becomes possible far beyond the calculus of earning and deserving. “The only way in which this can be a universe where judgment has no place,” he repeated, “is if every moment is a gift that has nothing to do with our efforts.”

What happens when we think ourselves separate from nature? We forget that life itself—and every thing within it—is a gift. We begin to believe that our survival depends only on us, and we forget that we are in it together. We start to imagine that the line between effort and reward is unbroken, and we begin to rank one another on a scale of how deserving. We bunker ourselves against the mercy of the universe with property titles and investment portfolios, forgetting that the only hedge against want is compassion and the only insurance there has ever been is sharing.

To know our connection to nature is to remember that we stand in absolute equality with every other human and every other being on the planet, equally subject to hurricane and fire, equally graced with living and dying. We are the humble Mouse—dependent in every moment, for our survival and our success, on the gifts of others, the gifts of the Earth. We exist through nature’s mercy, and the only way to live truthfully—that is, in alignment with reality—is to show mercy to others.

Bear remains adamant about this, and he repeats it whenever I need a reminder. “It’s all a gift,” he says. “It’s all mercy.”