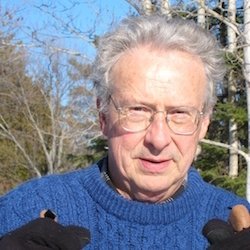 Over the course of his life Ron Engel has been a high school biology teacher, park ranger, community organizer, Unitarian Universalist minister, professor, and author.

Ron grew up on the outskirts of Baltimore where he fell in love with the beauty of the fields and streams of the Maryland countryside and became an avid hiker, birder and canoe enthusiast. In 1957 he married Joan Helen Gibb, a Ph.D. in creative writing (University of Illinois at Chicago) who specializes in nature writing and poetry. Together they have a son and daughter, who themselves are active in civic and environmental affairs.

In 1958 Ron earned his A.B. at Johns Hopkins University where he double majored in the biological sciences and creative writing and participated in early civil rights efforts with students at Morgan State College.

In the course of his work as a seasonal ranger at Kings Canyon National Park and a high school science teacher in Baltimore City and Baltimore County public schools he came to the conclusion that only a transformation in moral and religious consciousness will enable human beings to live by the democratic social values of liberty, equality and community and accept their responsibilities as participants in the evolutionary drama.

From 1960-1964 he studied for the ministry at Meadville Theological School of Lombard College (affiliated with the University of Chicago). During these years he and his family lived summers on Amygdaloid Island in Isle Royale National Park, Michigan, where he served as permanent seasonal ranger. In 1971 he was ordained by the First Unitarian Church of Chicago.

From 1964-1970 Ron co-directed the Center for Urban Ministry and served as minister of the Second Unitarian Church on the near northside of Chicago. During these years he was active in the civil rights movement in Chicago and cofounded the first community development corporation in Chicago, the Neighborhood Commons, which continues today as a predominantly black-owned and managed housing cooperative for low income persons in the Lincoln Park neighborhood.

His struggle to bring together within a comprehensive intellectual framework a commitment to social justice and ecological integrity led him to pursue the Ph.D. program in Ethics and Society at the Divinity School of the University of Chicago. A portion of his 1977 dissertation, Nature and Democracy, became the basis for his 1983 book on the role of the democratic faith in the emergence of the science of ecology and the preservation of the Indiana Dunes National Lakeshore — Sacred Sands: The Struggle for Community in the Indiana Dunes.

As professor of social ethics at Meadville/Lombard Theological School (1970-2000) and lecturer at the Divinity School and College of the University of Chicago, Ron helped to pioneer the new academic field of environmental social ethics and ecological theology.

Through his work with the National Council of Churches and the Unitarian Universalist Association, and as co-director of the Program on Ecology, Justice, and Faith (funded by the MacArthur Foundation), and co-founder of the Theological Initiative for Eco-justice Ministry in the Association of Chicago Theological Schools, he contributed to the emergence of the movement for eco-justice within the ecumenical religious community.

In 1984 Ron initiated the Ethics Working Group of the World Conservation Union, which eventually grew to a network of several hundred persons from over sixty nations, and played a leading role in the adoption of a “world ethic for living sustainably” as the foundation of the second world conservation strategy, Caring for the Earth (1990). During this period he also worked as a consultant on biosphere reserves for the UNESCO Man and the Biosphere program. In the late 90s he served as a core member of the international drafting committee for The Earth Charter, an effort to articulate a global ethic for the 21st century, sponsored by the Earth Council headquartered in San Jose, Costa Rica. In 2003 Ron was appointed co-chair of the Ethics Specialists Group of the IUCN Commission on Environmental Law.

Ron is Professor Emeritus at Meadville Lombard Theological School, at the University of Chicago.

Ron and Joan make their home in Beverly Shores, Indiana, where they work to preserve endangered habitat and restore the ecological integrity of the Indiana Dunes.