I don’t think I ever felt deprived of nature growing up in Brooklyn. To a little kid, New York City’s parks felt huge with endless room for adventure. I am still exploring them today. My block was not the most picturesque of streets, but it was a home for stately, beautiful Norway maples. It wasn’t until I started my training as an ecologist that I learned that these trees were exotic species and I was not supposed to like them.

My mother, who would speak very often about the fruit trees that grew in her Brooklyn yard, shared the same fondness for street trees and passed such appreciation for small nature down to me. I even had a woodlot of sorts. The Sisters of Mercy owned an entire city block that they pretty much left alone. It was full of old trees with a huge hill that offered a glimpse of the city’s original topography. All I wanted to do was jump the fence that enclosed that small piece of wildness. The woodlot was leveled in the 1990s and replaced with condos. I have since found other fences to jump.

I was one of those kids who always knew I wanted a career in conservation. Or as I put it at the time, I wanted a job “in nature.” I think that was my own code for wanting to get paid for exploring while looking at beautiful things. As a child, I spent a lot of time watching Marty Stauffer’s Wild America and Mutual of Omaha. My grandparents sent me Ranger Rick until I was nearly 18. For my birthdays, my parents took me to the Coney Island Aquarium. And other than a brief stint as a fry boy at Nathan’s Famous, I’ve had mostly environmental jobs. I volunteered as a docent with the Aquarium in middle school, worked for the NYC Parks Department in high school and college, and eventually went to grad school to study ecology in the wilds.

Leaving the city was never actually a goal. I thought of it more as a compromise. I believed that if I was to pursue a career “in nature”—if I was to have grand adventures—I was going to have to leave New York. At the time, I couldn’t reconcile my childhood experiences of small nature with the lush, exotic landscapes that I saw in print and on video. I could be green in NYC by turning off the lights and recycling more, but “real” nature was out there to be appreciated, studied, and protected. At least that is the message that my parents, the television, and frankly, most non-profits reinforced. Until now. Until the coyotes showed up.

I remember the day my attention turned toward coyotes. It was one of those moments that all scientists experience, but are afraid to admit, when they learn something new that they think they should already have known. I was working as a preserve manager at a land trust in Westchester County, New York, and I had to respond to some residents’ concerns over a coyote in their backyard. Before heading out to meet the neighbors, I did an online search to see what I was getting into. That’s when I stumbled across a website from the State University of New York that said coyotes were found almost everywhere except Long Island.

Since the nineteenth century, coyotes have expanded their range north, south, east, and west. Traditionally a species of the open plains, coyotes have come to occupy rural, forested, and urban landscapes. A breeding population on suburban Long Island is all but inevitable, leaving just the question of when. With healthy populations in the northern and western suburbs, New York City lies at the front of the eastern coyote’s range. All of the sudden, my next research project was a subway stop away. 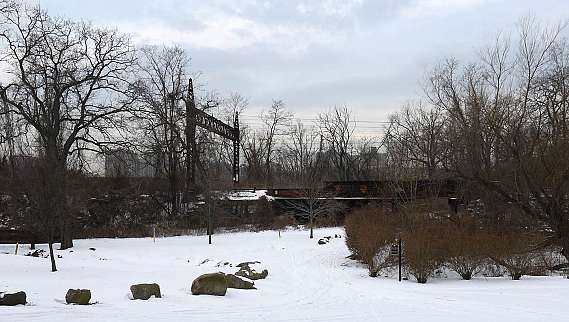 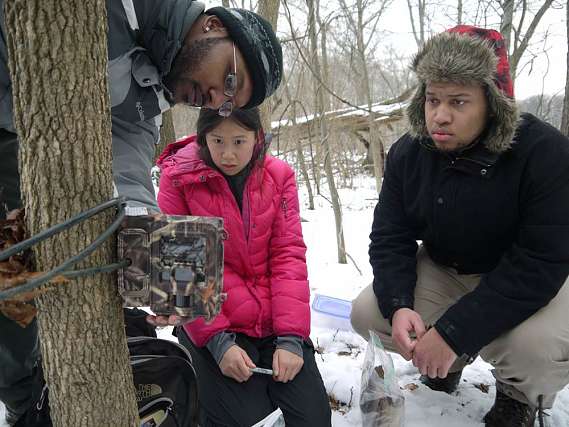 Working with my colleagues Christopher Nagy and Anne Toomey, in 2010 we started what would become the Gotham Coyote Project, an effort to study NYC’s new coyote population. In our first few years, we have concentrated on a basic question: Where are coyotes in NYC and its surrounding suburbs? We started the first large-scale camera trap study in NYC to address this question, producing thousands of amazing shots and many more unanswered questions.

The project is just getting started and our research team aspires to the rigor and success of Stan Gehrt’s Cook County Coyote Project. But the story of the Gotham coyote, and more broadly, the eastern coyote, is already amazing. The mention of coyotes in the Bronx fills people, especially students, with curiosity. And with that little parlor trick you have their attention. Through the eastern coyote, you can explore a diversity of themes, from American history to genomics. Why are there coyotes in NYC? Well, it’s all about a history of land clearing and predator eradication. Why is the eastern coyote called a coywolf? Well, how much do you know about evolution, selection, and adaptation? Is the coywolf a species? Well, what is a species? These kinds of conversations can go on for a long time (and they often do, to the detriment of my lesson plan) and veer off in many different directions. It all starts with wonder. 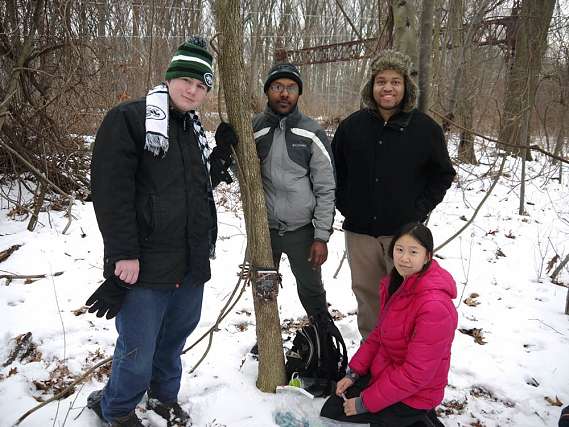 Education has always been a central focus of the Gotham Coyote Project. We’ve had over a dozen high school students join us in the field to set up cameras, collect poop, and experiment with new ways of studying (sub)urban wildlife. Perhaps the greatest lesson coyotes can offer is related to the walls we put up between human and non-human worlds. Having a 40 lb. wild canid living in one of North America’s most densely populated urban centers makes you think. Ultimately, I want my students to have the opportunity to explore the world’s great natural wonders and contribute to biodiversity protection in those hotspots where there is so much to lose. But, I also hope my students (as I did) draw inspiration from jumping fences, exploring post-industrial wild places, and searching for urban coyotes, a species that has made a living by defying expectations.

The following images are from camera trap surveys in the Bronx. In the second image from the bottom, the Henry Hudson Parkway is visible in the background … 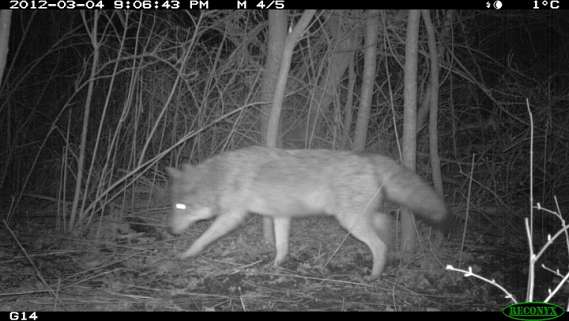 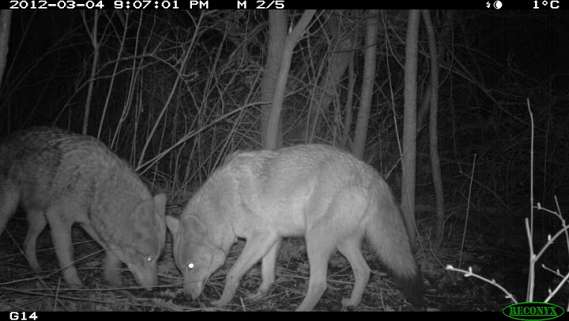 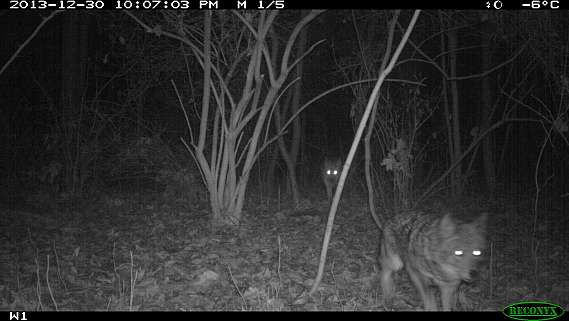 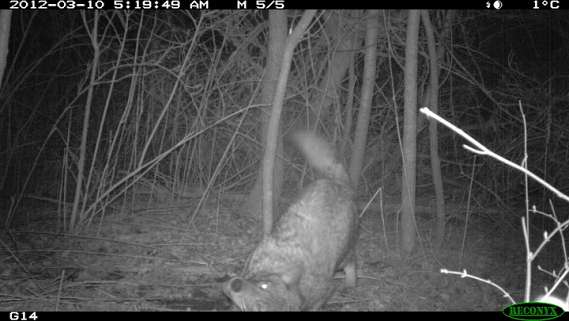 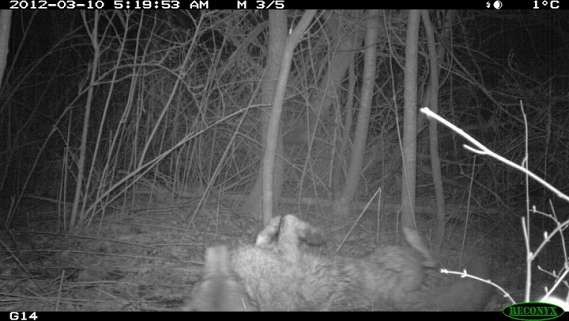 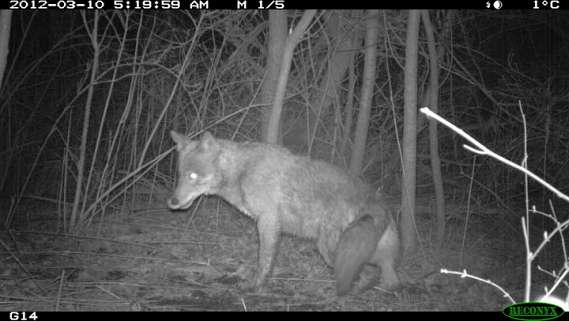 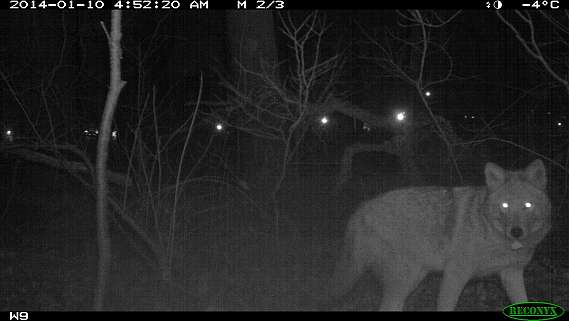 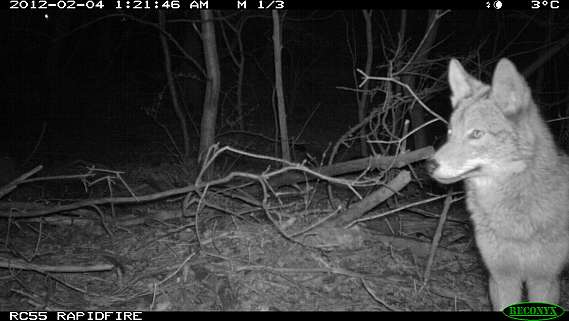