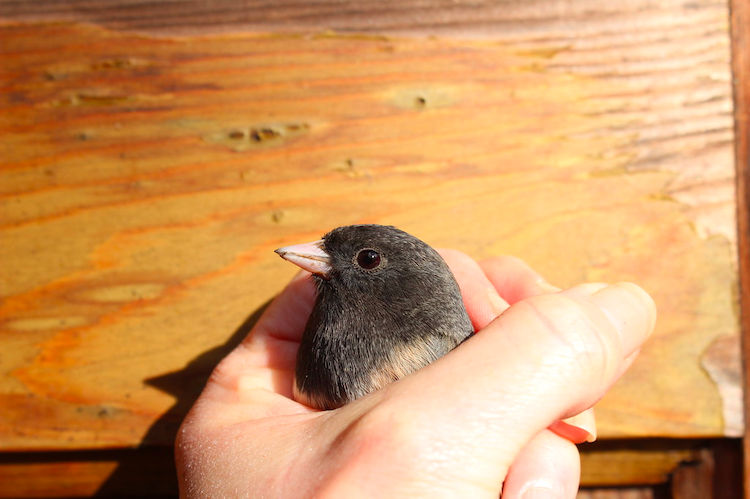 Thunk! The sound of a songbird hitting a window sends us running outside. At my side is a nine-year-old girl named Hazel who loves to draw birds. The Dark-eyed Junco lies motionless with eyes open, tiny feet in the air. How could this have happened? We put specially designed film squares on windows to make them visible to birds. We’d scattered birdseed in the snow well away from the house. Likely, something—a passing merlin or Cooper’s Hawk—scared the flock to fluster away in all directions.

Despite best efforts, collisions do happen sometimes. I know, because I’ve watched and fed birds in my back and front yards for years. I attract them in other ways, too, planting native shrubs, wildflowers, and trees that host caterpillars so songbirds can feed their young.

“Is the bird dead?” Hazel looks at me with sad brown eyes.

I put my hands around the junco, scoop up the songbird, and carry the seemingly weightless body indoors. Hazel helps me find a shoebox. I line the box with a soft cloth, place the junco on this makeshift bed, and close the lid (first poking a few holes in the top). Hazel gives me a questioning look and I hope my answer will be true. Her wide-open, young face framed in soft, straight, long brown hair is so innocent and unmarred by life’s wounds.

“Just like us, when we’re hurt, we need to rest and feel better.”

“We’ll check in a few minutes.”

Then, I join Hazel’s parents, her little sister, and my husband, all of us readying for a hike into the lava fields that extend for miles close by our home in the pines of Bend, Oregon. Our friends are always up for a rugged adventure, as long as it’s at least a bit family-friendly.

We’re chatting, when suddenly the junco is flying around our living room.

“Hazel! Did you open the box?” Her mother looks at her.

“I was just checking. I didn’t know he would fly!”

The junco lands on the top of a framed art piece, a poster that features a caribou on tundra and celebrates the 25th anniversary of the Arctic National Wildlife Refuge. Our living room wall is high, and the junco perches about twelve feet up. I admire the living bird for a few seconds before taking action. An adult junco looks like he or she is wearing a black headscarf over soft tans and grays. That pink, conical beak is just right for cracking seeds. Those eyes are the darkest night sky.

I have an affection for juncos that live year-round in northern climes, toughing out the roughest of storms. Their sweet trilling gives lilting radiance to the grayest days. Gathering in winter and spring flocks at the feeder, they hop and never saunter, swagger, or run. Once, when I was hiking through a fir and pine forest in summer, a junco flew up from underfoot. I paused in time to avoid stepping on her woven nest cupped at the base of some bunchgrass. For a few precious seconds, I reveled in the perfection of five speckled eggs, and then walked on.

The junco on the art frame looks poised and ready for flight. Fortunately, my grandmother’s antique cedar chest forms a perfect platform for stepping up and reaching in slow motion to cage the junco within my curved fingers and thumbs. We all walk outside.

Not all birds are so fortunate. I believe people show their best selves when it comes to rescuing individual birds in distress. Yet, it’s harder to fathom the immense threats to birds that result in billions dying annually from collisions with windows and buildings. It is easy to take steps at home to prevent window strikes by making windows visible to birds and placing bird feeders less than three feet from a window or, alternatively, more than ten feet away. When close-up, a bird won’t get hurt when flying from a feeder toward the window. When far away, a bird can maneuver away, as long as the window is recognizable.

I gesture for Hazel to come close and place the junco in her small outstretched hands, held close together in an upturned offering. For a couple of precious seconds, I know she feels the beating heart, the flutter of wings, the tickle of feet on her palms. She opens her hands wide. The junco flies free, tail flashing that distinctive pattern of white-black-white.

Take Action to Save Birds from Colliding with Windows

A billion birds a year die in the United States from striking windows. Here are a few ways to help.