Five years ago, I recorded a conversation with my mother, Ellen Yang, and another with an astrophysicist, Jeff Oishi, as part of a project called Interviews with the Milky Way. The Milky Way is our home galaxy. From our terrestrial perspective, it appears like a distant expanse “out there,” when in fact our planet and its solar system are nestled deep within it.[1] This means that every pebble and poem, person and pinecone, is just as much an authentic manifestation of the galaxy as any blazing star or unsparingly dense black hole. And so to “interview the Milky Way” needn’t be something done figuratively—a metaphor for examining a far-off constellation or a law of physics—I can literally interview the galaxy simply by talking to my mother, a part of the universe who also bore me into it. What emerges from such an interview, from the point of view of the galaxy, would therefore be a sort of self-inquiry, an inner dialogue of a kind. Excerpted here are fragments from that conversation:

Astronomers claim that the big bang brought time and space into being. In their absence, there was no where or when to speak of, and consequently no relationships of any sort: now and then, here and there, this and that are discernible only within the territories of difference that time and space create between things. In this (meta)physics, difference and distinction turn out to be exactly what allow everything to relate to anything else. Logically and paradoxically, it is only through the precondition of separation that connection and kinship are possible.

Think about the entity from which the whole universe emerged through that big bang. Cosmologists call it the initial singularity (or IS, as an acronym). This singularity would seem to have been infinitely singular given that there was absolutely nothing else in existence to keep it company. So utterly unrelated to any other thing, the initial singularity was axiomatically alone. “What am I?” “Where am I?” Those questions couldn’t even be asked until after the universe arose.

In my mother’s first memory, she is not alone. She is sitting with her little brother, separated from him by the small space between them on the porch, and by the eighteen-month difference when each one of them became fully fledged parts of the galaxy. But my mother worries that perhaps this first memory is a false one, seeded into her mind by a photograph. The mind’s eye and the camera’s eye captured a moment that appears almost too much alike, with a similarity between the two that feels uncomfortable and deceptive. She wants to know the cause and effect of photography relative to memory. Which is the original, and which is the copy? Was it a flat image or a lived experience that shaped her recollection? It is a question of origins from the very beginning.

Although the initial singularity was doubtlessly shapeless, the universe now is abundant with shapes: sand grains, blue flames, snail shells, tadpoles, and clouds; tendrils, spirals, orbits, and waves ad infinitum. Mathematics can relate every shape to every other shape—by similarity, equation, or transformation—through matrix algebra and foundational geometries. But running throughout every shape is an even deeper and mutual relationality born of shared genealogy: all are descendants of that self-same initial singularity. The universe full of shapes is a folding and unfolding family of brothers and sisters, parents and children, with each and every thing necessarily related within the entangling kinshape of space-time: kin (gene–, “to give birth”) and –ship (–scipe, “to shape”). Relationship, friendship, kinship . . . Every –ship is an expression of shape. 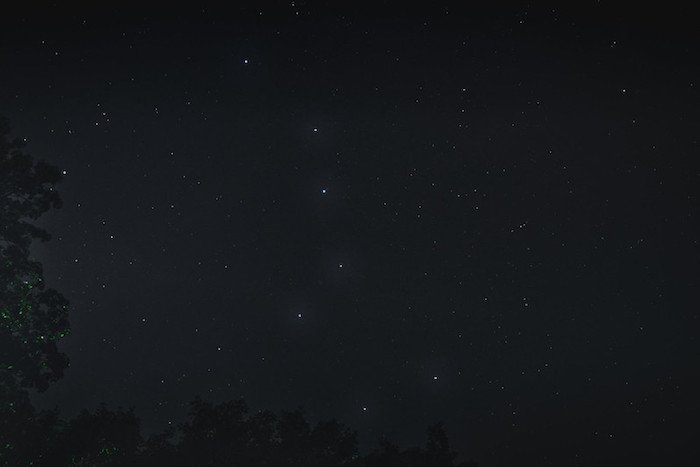 Despite the space-time that separated my mother and her brother on that porch of first memory, their kinship—short of being identical twins—could have hardly been closer. They were born of Mr. and Mrs. Smith, whose namesake ancestors smithed elements with heat, since the vocation of any smith is the bending of something shapeless into shape.

Every constellation is an extraterrestrial inference, a pattern in the galaxy that our ancestors thought related to a pattern on the Earth: horses, crabs, bears, warriors, snakes, and big spoons. The sky is full of celestial likenesses. Upon looking for the Big Dipper, my mother seeks a familiar shape, a spoony similarity, a shape that smiths—black, silver, gold—have crafted for millennia. She passed that search image onto me, and the contours of a handle connected to a cup are the very first things that I look for when I look into the sky. The spoon is a tool shaped precisely to enter the shape of a mouth, the lips, and feed the body that it opens into.

My mother carried me before I was even myself. What was to become me was a perfect sphere—an egg that was both her and something that she had carried since before she had even been born.[3] It could be tempting to think of that egg, full of potential, as a singularity waiting to unfold on its own. But in fact nothing becomes anything on its own after the big bang. In the universe, everything relies on kin.

In my mother’s womb, it was dark and I was floating. There was a shape wrapped around my own shape shaping me. My growing and elaborating form received all of its nutriment and all of its air through the umbilical cord that tethered us to one another. And once I was born? One thing became two. It was an act of separation and, as such, an invitation to reconnect. Although the cord is cut, the mother still feeds the child. The infant’s mouth latches onto the mother’s breast—kinshapes made to relate to each other exactly. And the child drinks.

The galaxy is milky like mothers’ milk. As clouds of hydrogen surround other clouds, they swirl, gravitate, condense, and then ignite—it is the one new star born in the Milky Way this year.[4] The baby drinks up as much as it can, skin to kin. The energy in the milk takes a special molecular shape, a sugar that only milk contains: galactose. The kinship of language reveals the mythically milky nature of the Milky Way as etymologically galactic (Greek, galaktos—“milk”).

A baby’s mouth shapes the air as a syllable, calling to its mother to be fed:

The world over, infants call to their mother by a shared name. Some linguists believe that this derives from the fact that mmmm is the only sound a baby’s mouth, when feeding on its mother breast and full of milk, can naturally make: a primordial phoneme and universal kinshape that emerges from the most basic of connections. Mamma, ama, and mama (in Latin, Xhosa, and Hausa) mean “breast”; mamar (in Spanish) means “to suck.”[5] With all this, our kinship to mammals and their milk-giving mammaries should come as no surprise. The milk spills across cultures, species, and galaxies. If every galaxy is a mother’s milk, then for every single mammal, the process of lactation is also galactation, as one part of the galaxy feeds another.

Carl Sagan observed: “Some part of our being knows this is where we came from, and we long to return. And we can, because the cosmos is also within us. . . . We are a way for the cosmos to know itself.”[6] When my mother was a child, she saw so many stars and so many shapes, even if she didn’t recognize them. Tonight as I write this, I look skyward to a human-made glow emanating from streetlamps and buildings that envelops my field of view, and the lights of a line of landing airplanes blink directly overhead.[7] Darkness is almost a complete stranger here, and on this night my daughter, Stella, turns out to be the only star I can see in the city.[8] She has yet to see the Milky Way in the sky. I don’t know if she will inherit the desire to seek out the Big Dipper, Orion the Hunter, or the Seven Sisters, who are all there, yet increasingly unvisible.

The Milky Way is our extended being, the context through which we are something more than a singularity—it reminds us that we are not axiomatically alone, either in the universe or here on Earth. Although I am grateful for the myriad telescopes, detectors, and probes that grant us detailed cosmic introspection, without the chance to see the rest of the universe with our own eyes, we lose the most intimate and embodied means for us to know that larger self. If our terrestrial connections are made stronger through the extraterrestrial, then the night sky has the potential to be an expansive and unmatched looking glass. Our obsession with artificial light risks extinguishing the galaxy from our lived experience and the loss of a kinship as old as the universe itself.

I want to live on a planet with perspective, a vantage from which new relationships are given the space to take shape. The constellations will constellate, space-time will take its time. In a universe full of Universlings—here and there, past and future—we will continue to seek out all of our close and distant relatives, no matter what shape they may take.

Reprinted from Kinship: Belonging in a World of Relations, Vol. 1: Planet.

[1] Our solar system can be found in the Orion-Cygnus Arm (sometimes known as the Local Arm), one of a number of curved limbs in the spiral of the Milky Way galaxy. The stars of the prominent constellations Orion and Cygnus are found within this arm, some 10,000 light-years long and 3,500 light-years wide.

[2] According to the general relativity theory in physics, articulated by Albert Einstein, space and time are actually not independent properties of the universe, but rather are our phenomenal interpretations of the unified property called space-time. Even those things that seem unrelated may in fact be one and the same.

[3] The eggs carried by an adult female human are formed when they themselves are fetuses, being carried by their own mothers.

[4] Astronomers have estimated that between one and three stars are born within the Milky Way every year.

[6] Carl Sagan said this during “The Shores of the Cosmic Ocean,” the first episode of the PBS series Cosmos that aired in 1980.

[7] In 2019 the private space firm SpaceX launched some sixty small, caravanning internet satellites in orbit around Earth, the first of many thousands planned to launch in the coming few years. Much to the chagrin of professional astronomers, these satellites reflect a lot of sunlight at night, creating bright streaks across the sky and interfering with basic astronomical observations of ground-based telescopes, drowning out their view of the stars. While SpaceX works to create coating to dim the surface of such satellites, astronomers are considering legal action as the sky becomes increasing cluttered. Ironically, these Starlink satellites actually sever our link to the stars for the sake of increasing internet connectivity on the surface. See Jeff Foust, “Starlink vs. the Astronomers,” SpaceNews, February 4, 2020, https://spacenews.com/starlink–vs–the–astronomers/.

[8] Chicago, where my family lives, is considered the most light-polluted city in the United States, and the fourth-most polluted on the planet. See Dapika Kadaba, “Big Cities, Bright Lights: Ranking the Worst Light Pollution on Earth,” The Revelator, June 21, 2018, https://therevelator.org/cities–ranked–light–pollution/. Stella, from the Latin for “star.” In the most fundamental and material sense, we are in fact born of them, because all the elements heavier than hydrogen that make up or bodies were forged within ancient stars, or during their dramatic end-of-life explosions, called supernovas.