Lessons for an Apologetic Gardener 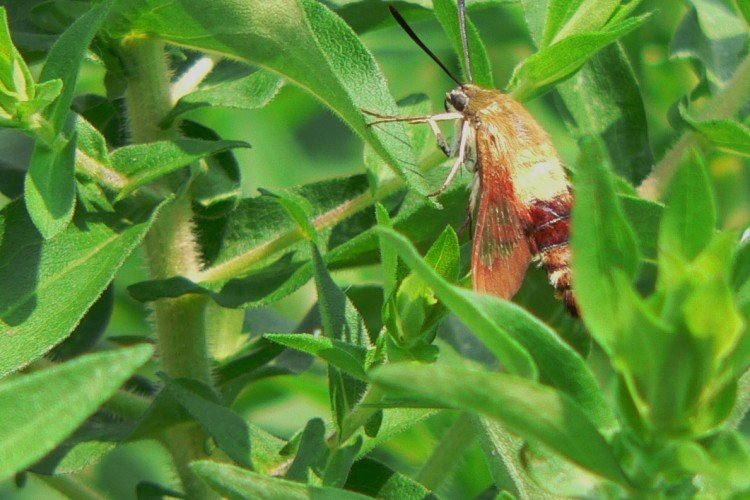 Am I the only person who apologizes to worms? To the small creatures that make their homes in soil, a gardener must seem like Godzilla galumphing through Tokyo, bringing destruction with every scoop of the trowel or scrape of the hoe. I find myself asking forgiveness of spiders, centipedes, and everything that crawls, slithers, or skitters away from my tending activities.

Gardening generates ambivalence in me. I enjoy caring for the garden, but don’t like disturbing creatures that live there. One day when I moved an edging stone, a hoard of tiny earwigs—a mother and her young—scattered. Replacing the stone, I tried steering them back underneath. “Like herding earwigs” came to mind, but I don’t expect it to catch on. Events such as these transform gardening time into thinking time for me—a time when the garden imparts its wisdom, if I’m attentive to it. 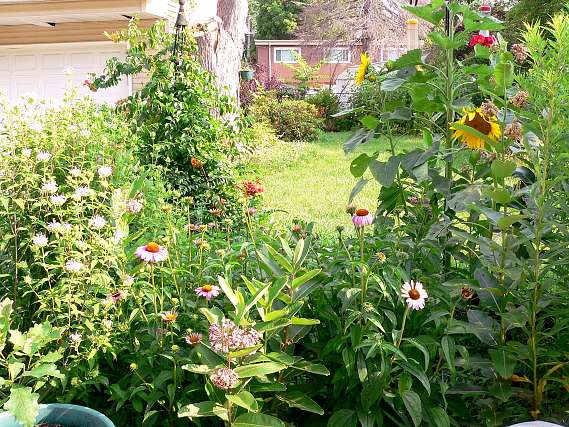 One thing I’ve learned is that—no matter how careful I am—I sometimes accidentally chop a worm in two. It’s impossible not to disturb some living things when gardening, which calls to mind another slightly tweaked aphorism of my own invention: “If you want to make a garden, you have to break some worms.” I don’t see that catching on, either.

I feel the garden always is communicating to me—lessons that I can’t easily put into eloquent phrases. Many of its messages encourage me to minimize harm and exercise compassion in what I do. I can wait a week to rearrange edging stones—until the earwigs nesting beneath have dispersed. I can hand-weed instead of using herbicides. While this means more work and inconvenience, I don’t feel that a perfect lawn is worth risking the harmful effects herbicides can cause.

As I think on it, I realize that gardening reinforces my practice of “live and let live.” This is something we learn as children; but as adults, we tend to forget that the choices we make allow for the survival of other beings as well as ourselves.

The garden’s “live and let live” principle applies not just to animals but also to plants. When I find a seedling in the yard and don’t know what it is, I often leave it alone to see what grows. I’ve had some interesting, and mixed, results.

Our driveway border, for example, benefits from this principle, and has transformed from a strip of grass into a delightful mix of black-eyed Susans, coneflowers, milkweed, and cranesbill—almost all due to natural propagation from other locations (and aided by some targeted weeding on my part). This unplanned border is rounded out with a few sunflowers, stragglers from our bird feeder. Just a foot wide along much of its length, the border provides habitat and food for a variety of insects and birds. 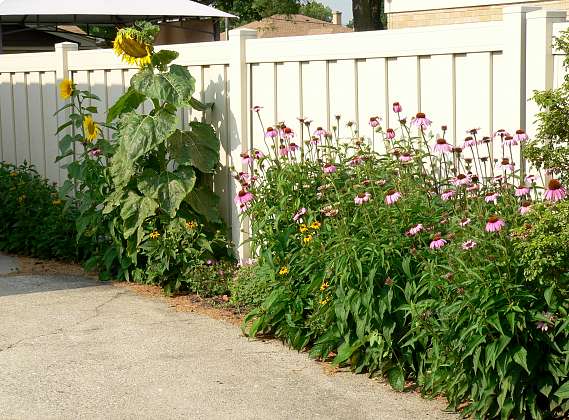 On the other hand, I once allowed a plant with pretty yellow flowers to grow too big, until it went to seed and became a not-so-wonderful crop of beggars’ ticks: two-pronged seeds similar to push pins that stick to clothes as if they’d been sewn on.

Still, I’ve had many pleasant surprises and try to work with what Mother Nature gives me. I don’t completely let her have her way, but I listen to and consider her suggestions. The 2½-foot-tall Eastern Red Cedar I recently planted in the yard began as a seedling concealed under a bush by the back fence. Having spent a few years being nurtured in a pot, it’s now a full-fledged yard tree; I look forward to watching it grow. Good suggestion from the garden. 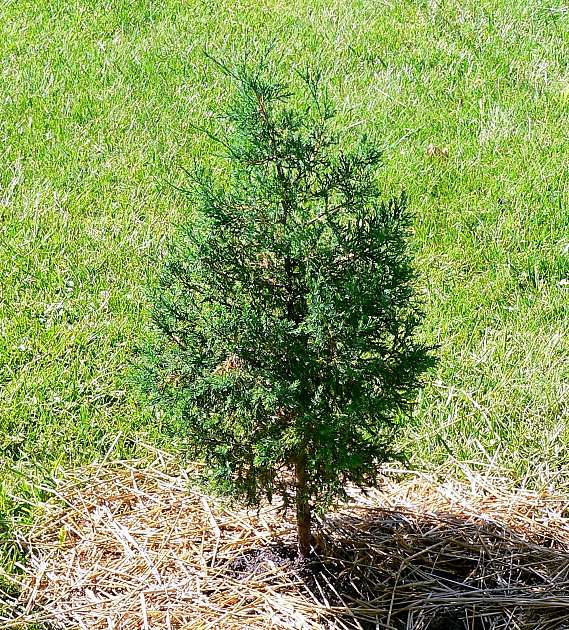 Another great idea from Mother Nature was a wild aster that I first believed to be the offspring of a nearby phlox. But the new plant grew into a large mound of purple flowers that provides color and pollen in the early fall when little else is blooming. This summer, long before its blooms began to form, I found a clearwing hummingbird moth resting among the asters’ leaves. I’m glad I left it alone and let it grow there. 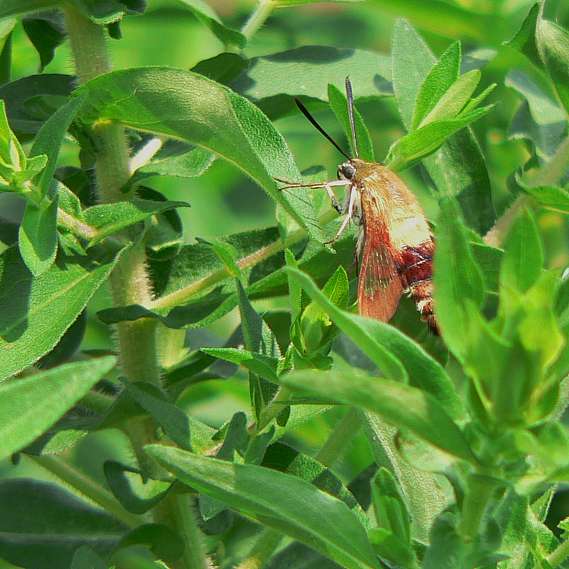 Observing and figuring out what to let alone are legitimate garden tasks, ones that many of us neglect. But they’re probably as important as weeding, digging, and raking. Trying to keep up with the beautifully manicured gardens of some friends, I sometimes find myself pulling things out, making edges super-neat, and generally being a little too hands-on with my garden. But I’m happier with it (and think that wildlife likes it better, too) if, instead of trying too hard to change the garden’s character, I allow my character to be transformed by it.

I remember a few unplanned trees growing in my childhood backyard, so I think my father practiced his own version of “live and let live” in his gardening. I inherited my father’s “gardening gene,” as well as some of his philosophy. I remember him spending many hours working in the yard when I was a child as I wondered what he was doing all that time. Now I understand how the minutes stretch into hours, as I explore the ever-changing world that is the garden.

My father’s exhaustive approach seemed like aimless puttering to some family and friends, but I have learned to see it differently. During the time Dad spent in the yard, I think he was watching, listening, and learning. When I garden, I’m sure I appear to be puttering, too. But if I’m mindful, I’m learning about—and from—the wisdom of the garden.