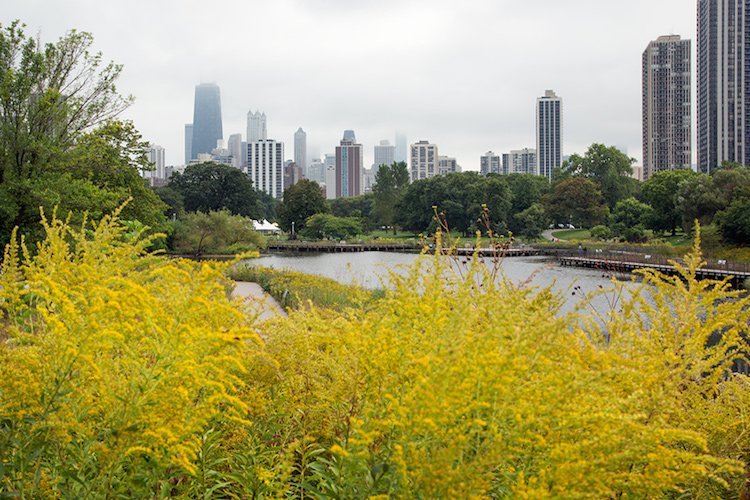 After spending most of the day exploring Chicago’s Lincoln Park, I come upon a gate I hadn’t noticed before. The gate, made of thick, dark, solid timbers, is closed. To either side, shrubbery presses against the fenced enclosure. It’s impossible to see what lies beyond. But the unlatched gate is ever so slightly ajar: an irresistible invitation!

I push the heavy door enough to squeeze through. Though I wonder why it isn’t left wide, I feel obligated to close it again. Perhaps it’s my imagination but the sound of traffic on busy Fullerton Avenue fades behind me. I turn my gaze upon an utterly delightful and unexpected scene. Twin stone paths diverge around a narrow pond fringed with a profusion of autumn flowers. There is no one else in sight. 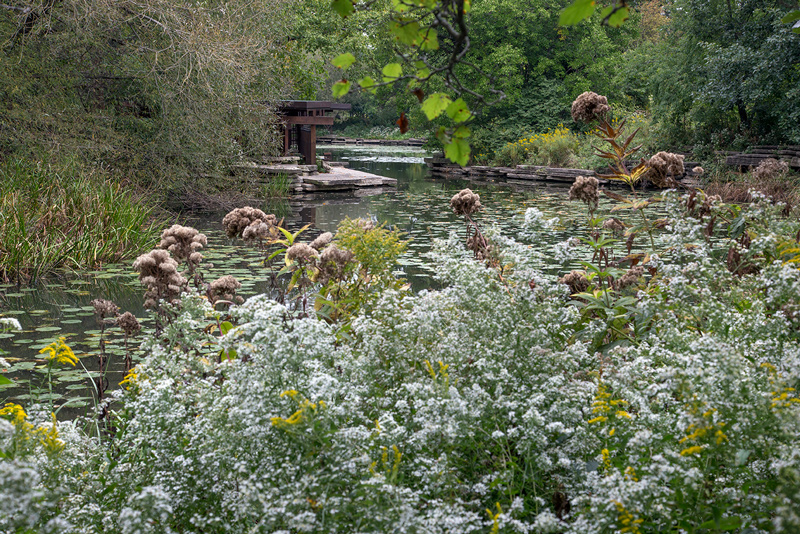 It seems miraculous, as if I have stumbled upon Chicago’s own Secret Garden. The great city has vanished along with its multitudes of people.

My solitary reverie lasts a few moments as I stroll along the edge of the pond. Then I reach a small pavilion designed with distinctive Prairie Style lines and made of the same heavy timbers as the gate. There I discover a wedding party posing for photographs. The spell may have broken but, as I move on down the stone path, the serenity and beauty remain.

But wait! There’s more…. Wondrously, I spot a juvenile black-crowned night heron not ten feet away from me. The bird stands quite motionless, alert to my movements, in the shade of an overhanging bush. I match its stillness and watch. The wedding party slowly circumnavigates the pond, posing at various photogenic spots along the way. Absorbed in their personal romance, they pass close by. The heron waits, oblivious and unobserved. 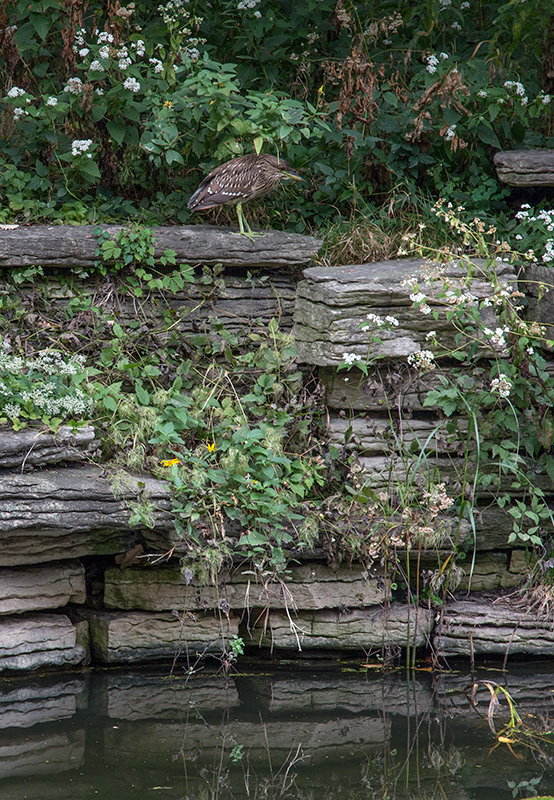 Alfred Caldwell Lily Pool, as it’s official called, may be familiar enough to regular park visitors, though I have to wonder if the formidable gate sometimes stymies even the locals. To this outsider from Milwaukee with a peculiar penchant for urban wilderness, it is a marvel.

But wait. There’s much more.

Lincoln Park is home to several nature and wildlife institutions. The most famous of these is the zoo. There are also the conservatory and the Peggy Notebaert Nature Museum. I made the rounds. Except for the Notebaert Museum, which hosts among its permanent attractions a rotating series of art exhibits, it was my first visit. 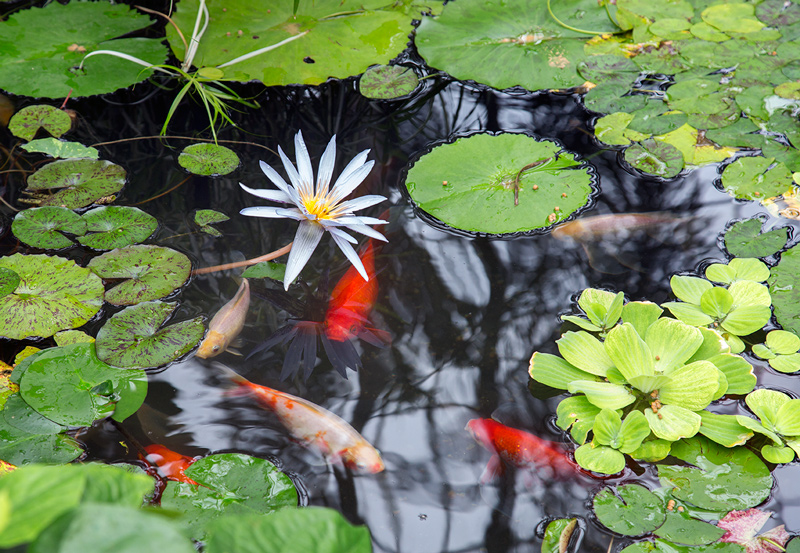 I’m a fan of botanical conservatories. Despite the ever-present and often looming steel and glass architecture, I never tire of the appearance and aroma of tropical, arid, and other exotic plants (and the occasional koi!), especially as autumn ushers in another Midwestern winter! 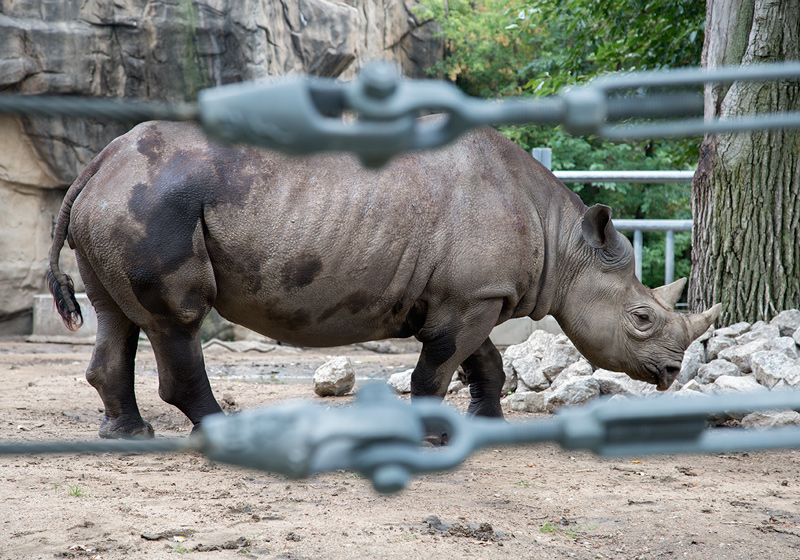 Although I approach zoos with considerably more ambivalence, I found the one in Lincoln Park more attractive than most. I can never shake the melancholy of seeing wild animals enclosed. And yet I know I shall never see a rhinoceros in the wild. Sadly, there are fewer rhinos of all species combined left in the world than there are people living in the Lincoln Park neighborhood of Chicago. Some subspecies have become so endangered that zoos are their only hope for survival. Clearly zoos have their place.

The zoo, indoor gardens, and nature museum all have important roles to play in densely populated Chicago. But what denizens of the city really need, at least from my perspective, is pure, unadulterated nature. Fortunately, Lincoln Park is large enough to accommodate healthy doses of this essential ingredient of urban living. All within walking distance of downtown.

What I found most fascinating about my day out in Lincoln Park were the many odd and often paradoxical juxtapositions that exist there. I saw the same spark of wildness in the eyes of a caged vulture as in the wild heron. A great blossoming of autumn flowers set a stage for at least four radiant bridal parties in one weekday. Waterfowl crowded ponds surrounded by similarly congested boardwalks. Trees dominate a skyline that includes some of the tallest buildings in the world. 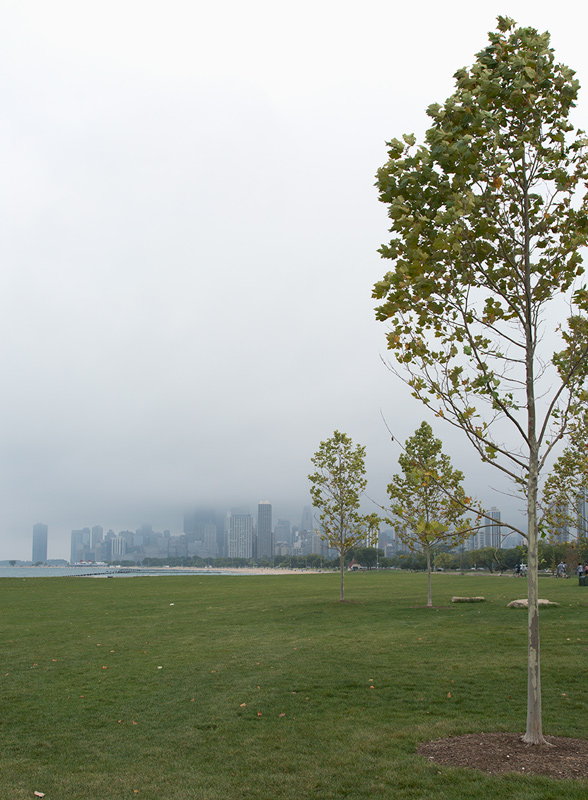 A vast sky over Lake Michigan dwarfs that skyline.

Here are a series of photographs documenting a few observations of a day in the life of Lincoln Park: 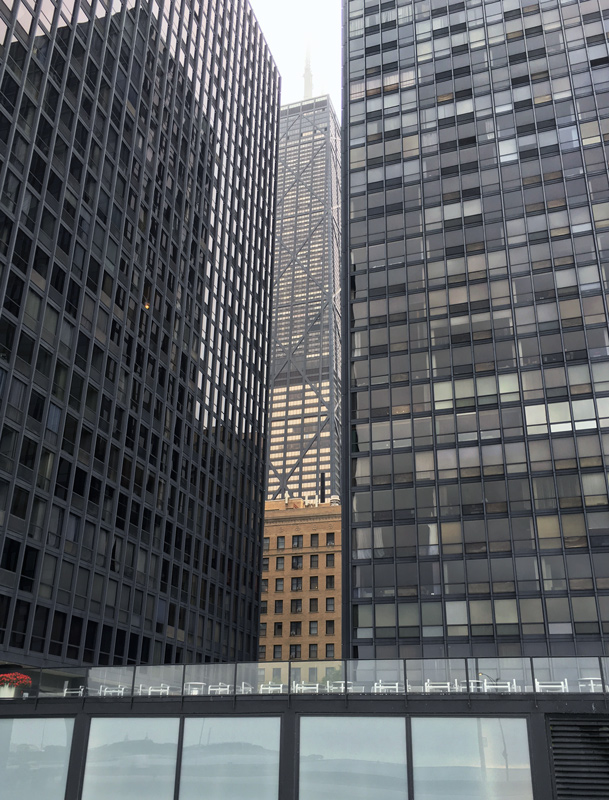 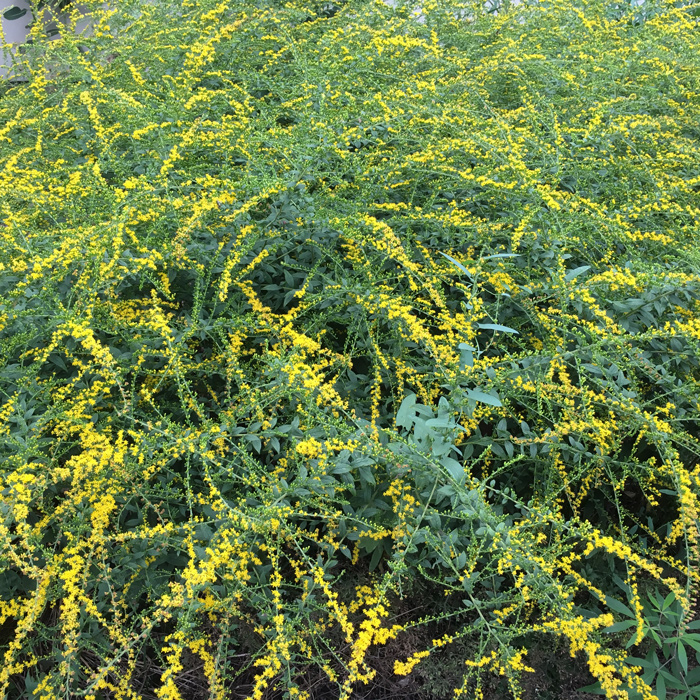 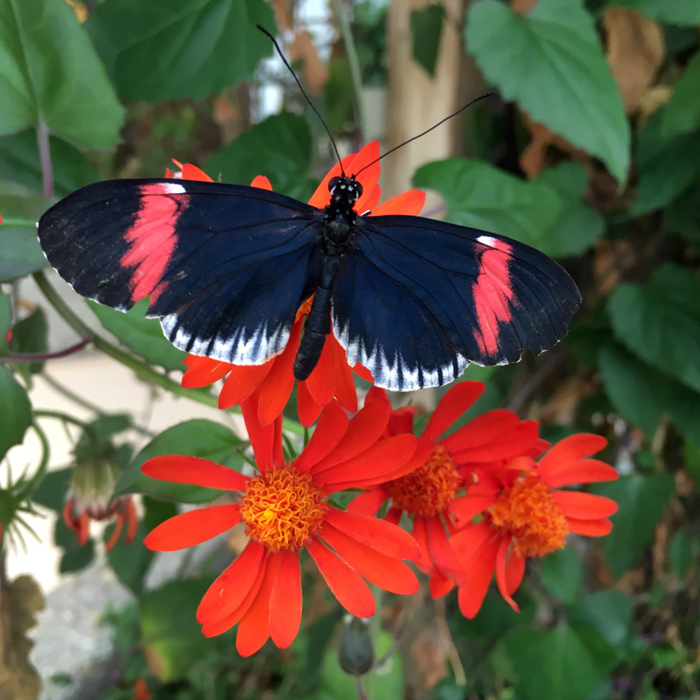 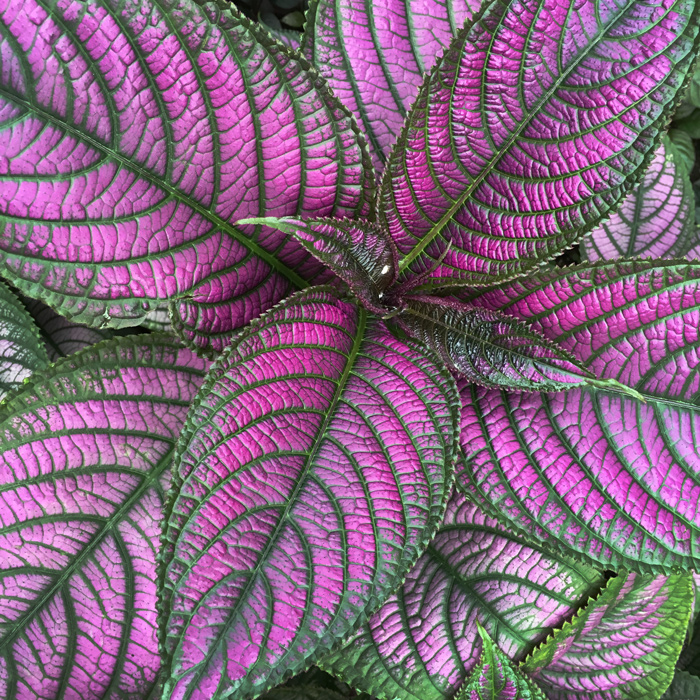 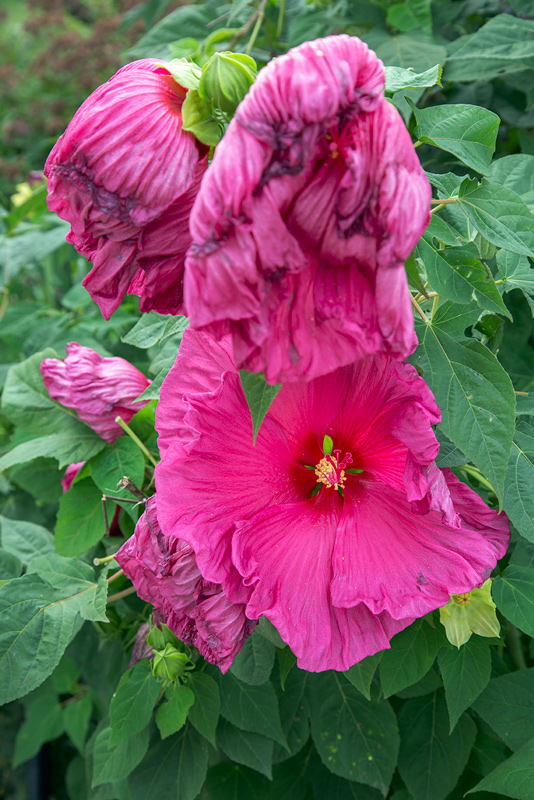 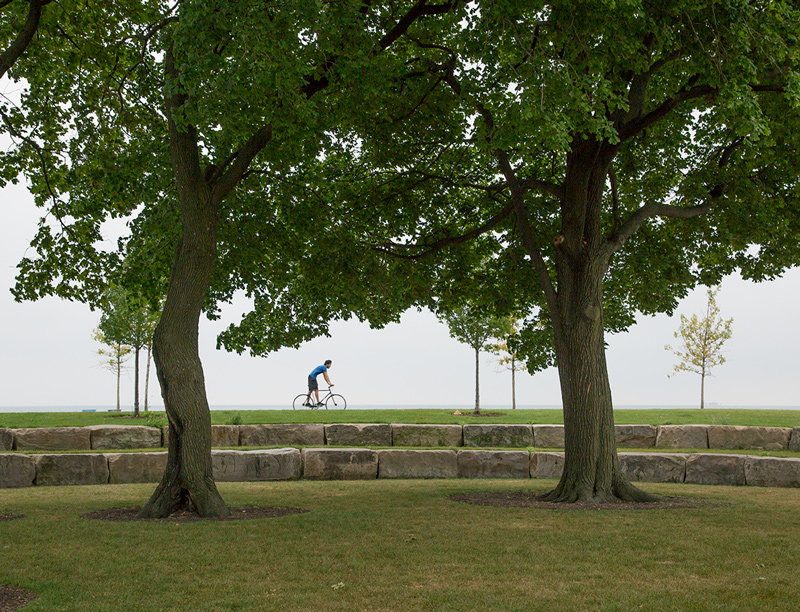 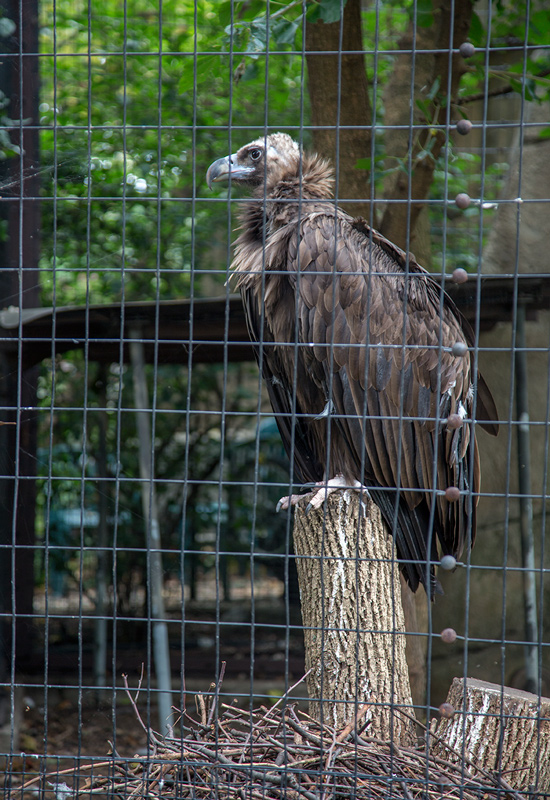 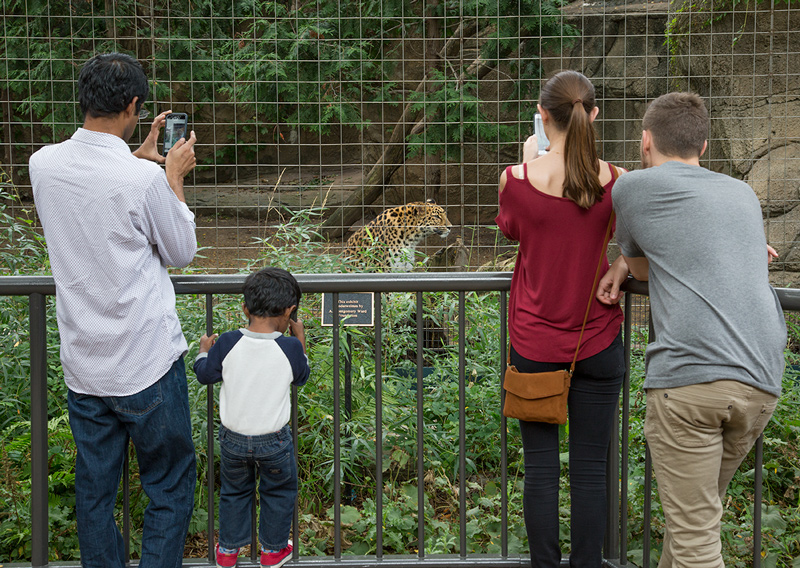 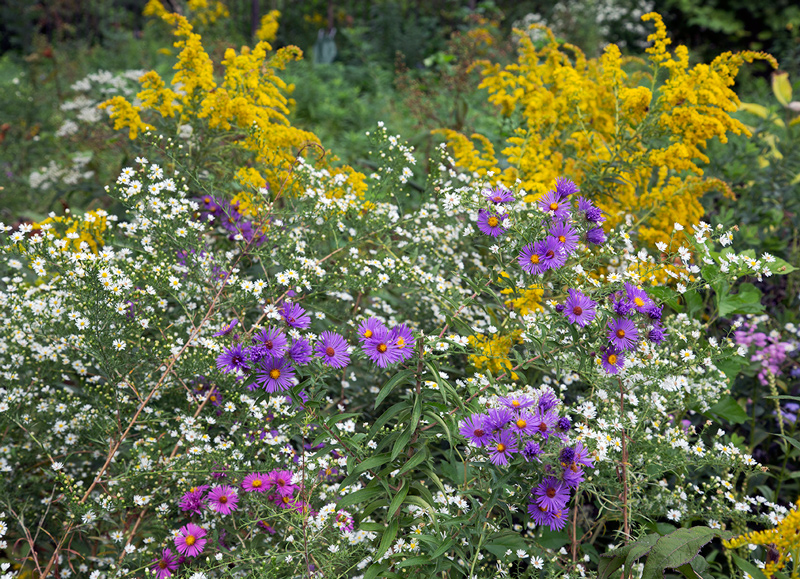 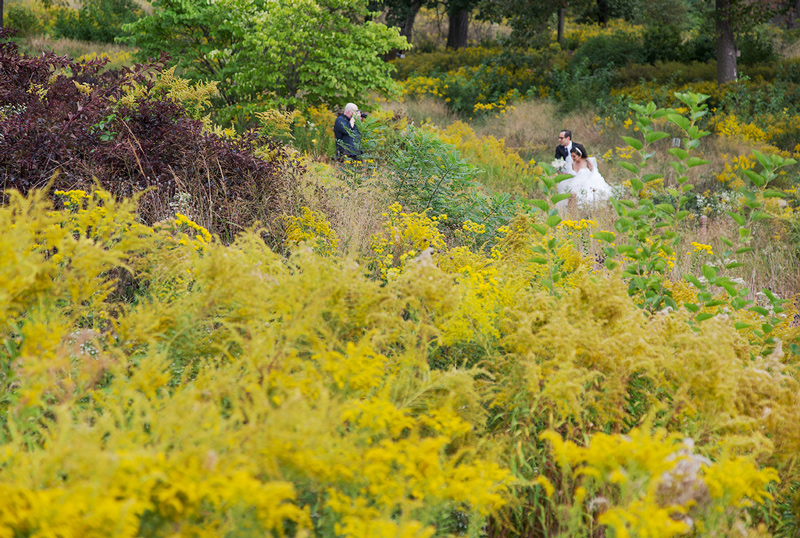 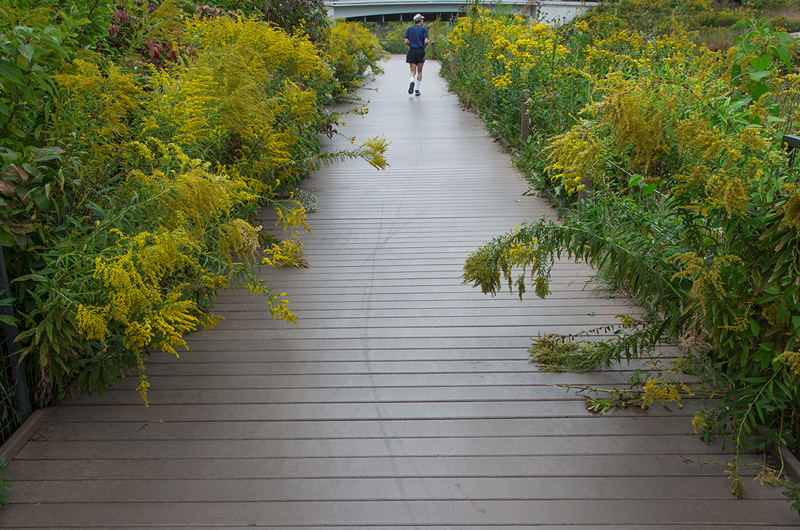 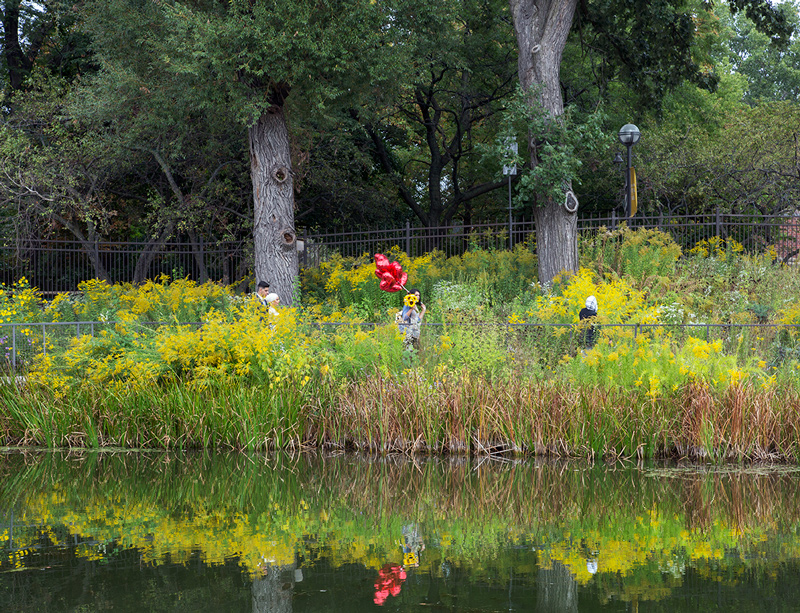 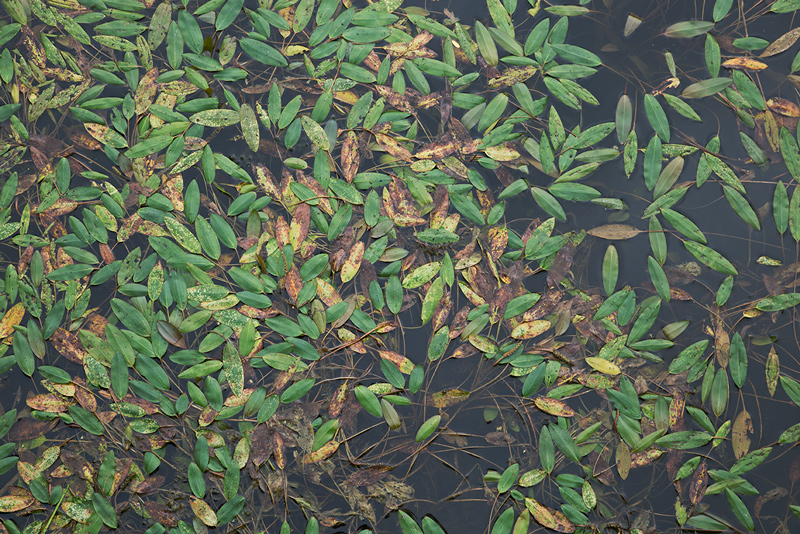 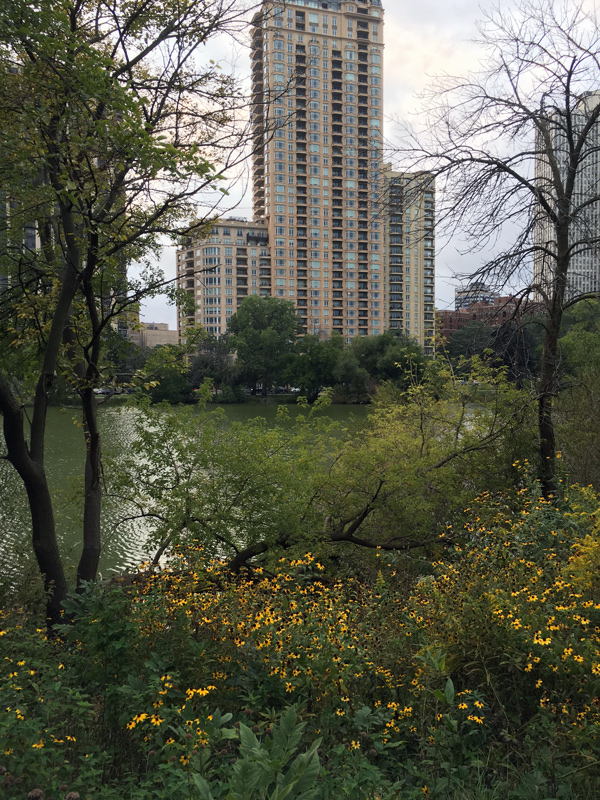 My favorite moment comes after a break for dinner. Dusk is closing in and dimming the light. Strolling along the edge of North Pond, through a nominal “wildlife sanctuary,” I spot a great blue heron out over the water on a dead limb. It is framed but not subdued by tall apartment buildings across the water. 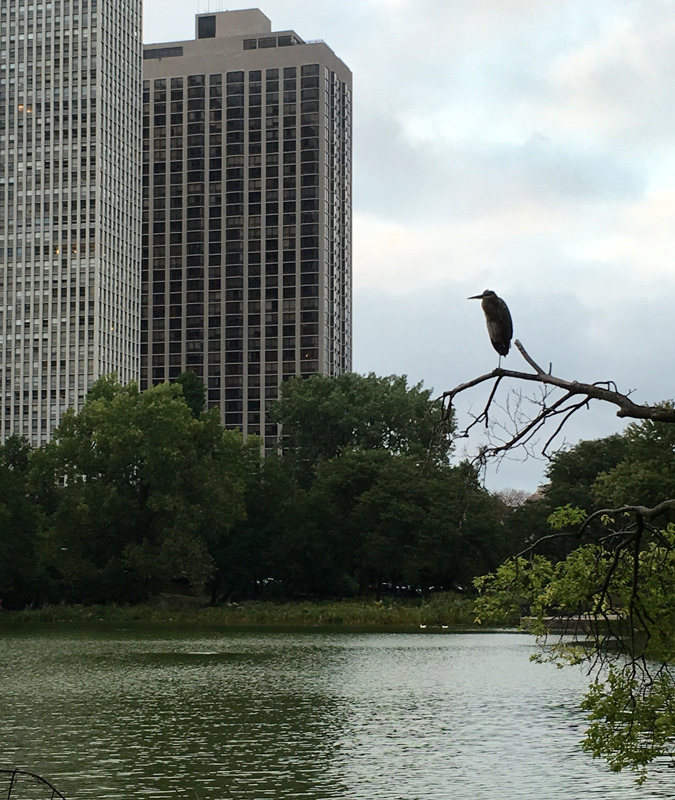 I’ve left my camera at the hotel so I pull out my phone to capture the totemic bird.

Salutations to the urban wilderness, its secret gardens and open secrets!