Lions, Tigers, and Pumpkins at the International Exotic Animal Sanctuary 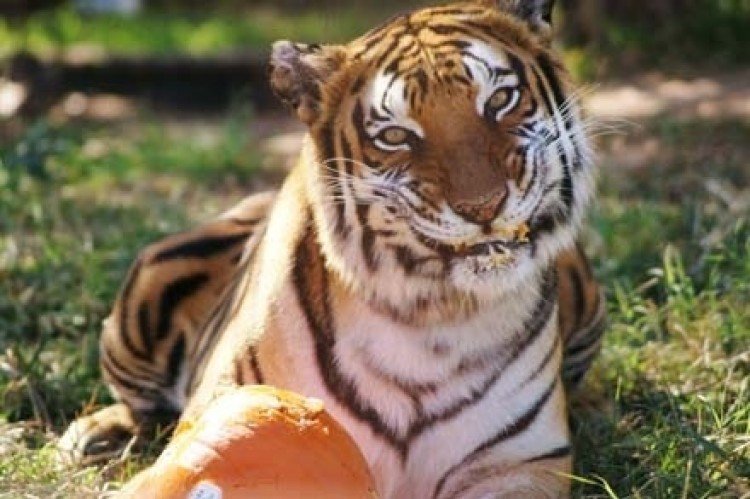 Over the holidays, my wife and I took my mom to visit the International Exotic Animal Sanctuary (IEAS) in Boyd, Texas, 35 miles northwest of Fort Worth. For many years my mom’s favorite non-domestic animals have been big cats, and since the IEAS specializes in felines—they currently have 46, including bobcats, jaguars, leopards, lions, and tigers—the sanctuary seemed like the perfect place to take her. And it made special sense to visit a wildlife sanctuary, since my mom runs her own cat rescue (for small, domestic ones).

For a reasonable donation, the IEAS offers weekend tours, including vehicle tours for those with limited mobility, like my mom. The day we went several interns were leading tours, and they were all fantastic. If you’re reading this blog you probably have a soft spot for animals, so you will know what I mean when I say that animal people have a special feeling about them—you know one when you meet one—and all three of the interns gave me that feeling very strongly. No wonder the IEAS intern program is one of the most highly regarded and sought after in the U.S., with former interns regularly finding permanent jobs in the field.

Visiting a wildlife sanctuary is a very different experience than visiting a zoo. Yes, both have large animals in captivity, and one feels the same sort of sympathy for the big cats behind bars: no matter how large, filled with lounging pools, and well supplied with enrichment toys (including pumpkins—who knew how much big cats and bears love to play with them!), it’s still just a cage containing an animal whose preferred home range is measured in miles, not square feet. But in the sanctuary, the animals are there because they have nowhere else to go: they have been in captivity too long to be released into the wild with any real hope of survival, let alone a quality life, and they are too big to live in somebody’s backyard.

Perhaps because our tour was so small—just four of us, including our intern guide—and perhaps because big cats know animal people when they see/smell them, too, we had a very different tour experience than many visitors. Animals that our guide told us almost never come out during tours seemed quite comfortable to hang out with us. I also chalk some of that up to our guide, a very self-possessed young woman whom several of the cats clearly knew and liked very well. In fact, she told us that she had sat quietly with several big cats for hours (outside their cages) as part of the IEAS’s Emotional Enrichment Program. This program was developed by the sanctuary’s animal behaviorist, Louis Dorfman, and is intended to help captive animals have a more emotionally rewarding and less stressful experience. 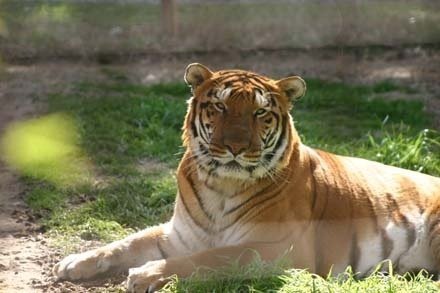 Programs like this are especially important for animals who have suffered various kinds of abuse before coming to the IEAS. For example, Caesar is a Siberian tiger who arrived in 1998. He was purchased by a young man as a gift for his girlfriend, and when Caesar got too big, the man gave him to his grandfather to keep in his barn. He said his grandfather should shoot the tiger if he did not come back to reclaim the cat. To his credit the grandfather called the Dallas SPCA, who in turn got in touch with IEAS. Because he had been mistreated and malnourished for the first seven months of his life, Caesar was not only angry and highly aggressive, but also has permanent joint problems. Thanks to the emotional enrichment program at IEAS, and a better diet, Caesar is now a much happier and healthier tiger, who even sometimes chuffs at his keepers rather than rushing at them (we learned at IEAS that “chuffing” is the tiger equivalent of a domestic cat’s purr). 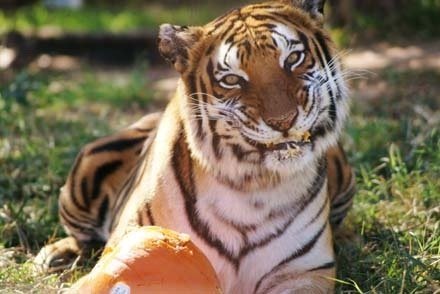 Like Caesar, pretty much every animal at IEAS has a heartbreaking story about how they got there. Sajani’s journey began with another Bengal tiger, Danvi, with whom she was rescued from the Wild Animal Orphanage in San Antonio in 2011. The State Attorney General was investigating the founders of that sanctuary for misappropriating funds that were supposed to have been spent on the animals, leaving the sanctuary with 350 animals in dire straits and more than $400,000 in debt. Sajani, though, has bounced back even more quickly than Caesar, and now is friendly and playful in her new home (as in this photo of Sajani with one of her favorite toys, a pumpkin).

Each of the animals we met at IEAS clearly had their own personality. While I wish I could afford to adopt one of the animals, paying a monthly fee to help pay for their food and medical care, and having the opportunity to participate in an emotional enrichment program with my adopted big cat, I also am keenly aware that these are not just cute little kitties. If my domestic cat gets pissed off at me, the worst I usually get out of the deal is a solid hiss and maybe a firm nip. Tigers have just the same ability to turn on an emotional dime as little cats, and unless you know them extremely well and read their tiny behavioral cues, you may find yourself on the receiving end of a tiger-sized nip or swat that would land you in the hospital. Out of that rational fear comes a healthy respect for these big cats, along with deep sympathy for the previous abuses they have suffered at human hands. Hopefully these big cats can act as goodwill ambassadors to help some of their fellows avoid their fates, while also offering us an invaluable opportunity to explore aspects of the human-animal bond that we only rarely have the chance to experience.