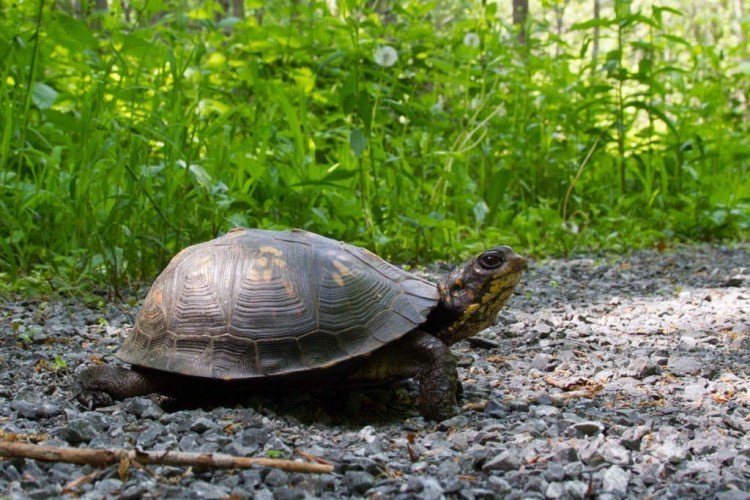 Just after four o’clock on the fourth of July, mid-afternoon, a time of day along Mundhank Road when my roadside birds were generally pretty quiet. The cars that normally zoomed by were absent, and other than the pops of distant firecrackers, the bird monitoring along these old hedgerows was a tranquil pursuit. Counting birds is a bit like fishing. When I returned home that day, my fiancé Marnie would ask me how I did, and on that fourth of July, my nineteenth foray, I had a pretty good haul: in seventeen minutes I spotted—coincidentally—seventeen birds. The big news of the afternoon was the sight of Downy Woodpecker, and the return visit of a handful of Cedar Waxwings—birds that seemingly never travel alone.

What drew me to Mundhank Road was my interest in the conservation and restoration of American hedgerows. I make my living as a horticulturist and arborist, but my curiosity about hedgerows didn’t come from being prompted by my clients; this interest arose from a conservation sensibility that has been with me since childhood. Lately, my pursuits in graduate studies have given me the ideal excuse to—apologies to Johnny Cash—walk the line and see who is living in these anonymous roadside margins.

Cook County in Illinois has over five million residents, making it the second most populous county in the United States. Mundhank Road is found in the northwest corner of the county, and this segment of the road appears rural enough. Parallel to the road is the backbone of a remnant hedgerow, comprised of dozens of battered and haggard looking Osage-orange (Maclura pomifera) trees. 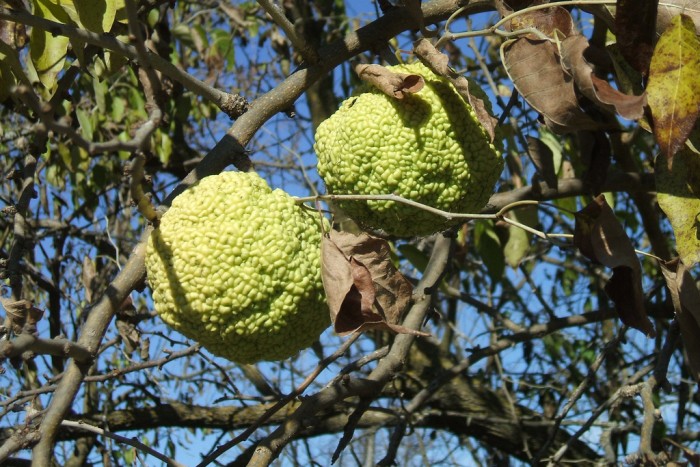 Planting hedgerows was a farming practice that European immigrants brought to the New World, and Osage-orange could be purchased—saplings by the bushel, a nickel apiece—to demarcate property lines across the landscape. This thorny species was one of many planted in lieu of fences by farmers who were turning the prairies of nineteenth-century Illinois into a patchwork of pastures and crops. Local historical records note that the Mundhank family settled in this part of Cook County in the 1870s. And while the exact planting date for these trees is unknown, they were likely planted in that era, alongside the farm road that became the two lane blacktop that now bears their name. Back in Europe, some hedgerows are known to be many hundreds of years old, and it’s a safe bet that—other than a few old oak groves in the vicinity—the Macluras on Mundhank Road are the oldest trees in this neighborhood. 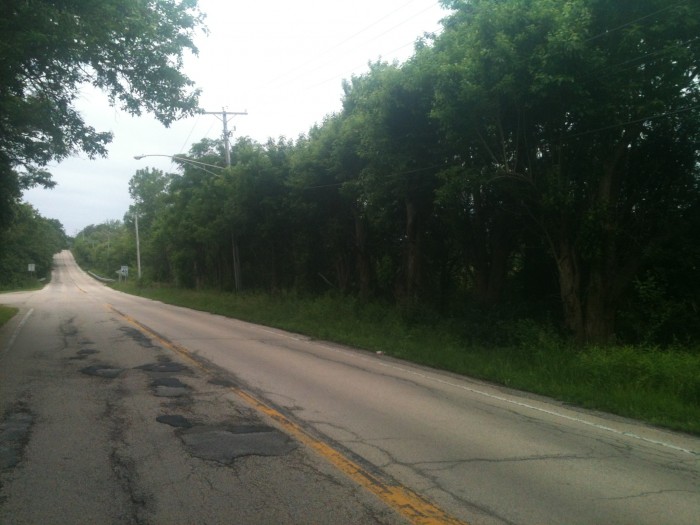 Counting birds in hedgerows isn’t quite as eccentric as it may sound. In Europe, hedges and field margins are often prized as places where small animals, birds, and insects can still find refuge in the edges of otherwise highly managed landscapes. Here in the Chicago region, such remnant hedgerows have largely been removed or absorbed by the relentless growth of the city and suburbs, but outliers can still be found here and there.

Despite its calm rural appearance, birding along Mundhank Road was a challenging experience. I soon learned that this rustic looking road is a known shortcut to nearby Interstate 90—hissing and murmuring like the sea in a seashell.

The hedges paralleled the road, and so birds could only be surveyed by walking along a shoulder that was non-existent. Sampling became an exercise in divided attention. During the course of each foray, I scanned the hedgerow for birds, while also watching the road for the next car zipping toward me from over the horizon. I was also birding solo, and I found myself wishing I had eyes in the back of my head to see the birds that took flight outside my field of view. As I walked my transects, I developed an odd new pace, pausing every so often to stop and look backwards. Of course, I also had to stop and write a quick note every time I spotted something. Such moments allowed me to watch for the cars, always the cars.

My time along Mundhank Road tracking birds was well spent. I soon came to know where a pair of Red-winged Blackbirds nested, and the small tree where a Song Sparrow routinely perched. During the survey, they became living benchmarks, reliable residents of the transects. On most visits, they were joined by Robins, Sparrows, and Cardinals. Aquatic species—Herons and Egrets—would fly overhead, visiting the small ponds down the road. A couple of times, Sandhill Cranes could be heard gurgling in the distance. In twenty-three visits, I spotted over 400 individual birds and 19 species that I could verify with confidence. I suspect there were others that were simply too far away to identify properly. 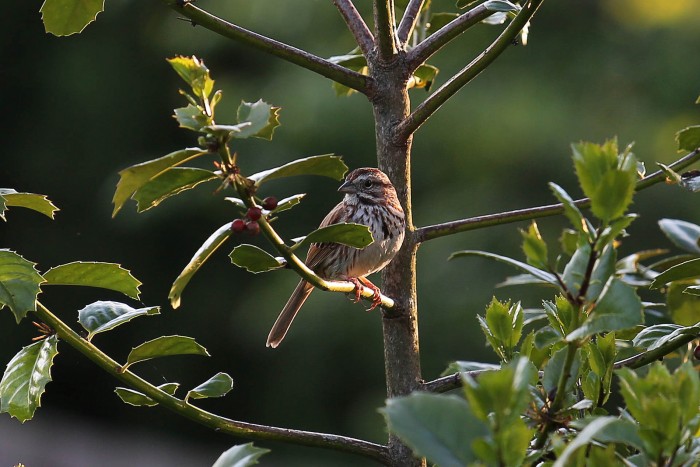 Even if these tallies aren’t revolutionary, I gained an intimacy with this roadside landscape. Other than the Osage-oranges, there was a mix of plants both native and invasive occupying the hedgerows. During my stint, a couple of Mulberry trees were starting to bear fruit, and drew a lot of attention from birds looking for an easy meal. Roadside flowers such as Chicory and Goldenrod grew in the ditch and swale off the road, cheerfully drawing the eye away from the garbage and unlucky animals that had been killed by cars.

When Marnie and I revisited the Mundhank Road hedgerows this fall, the Red-winged Blackbirds had already flown south. Studies in red, we saw one lone male Cardinal shoot across the road and Virginia Creeper vine turning crimson. 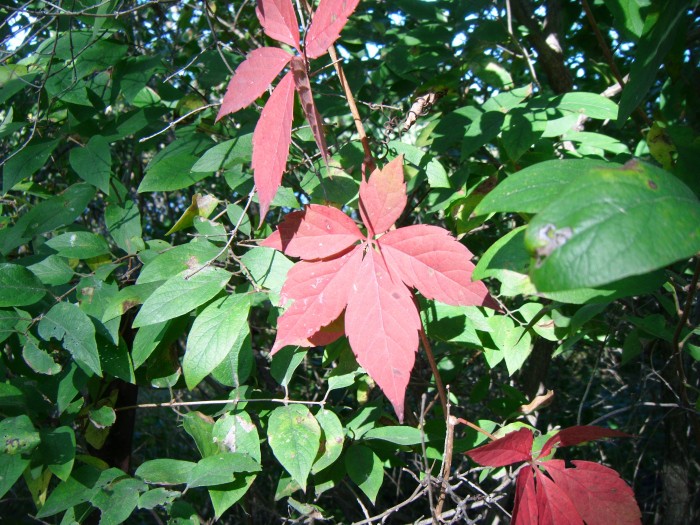 The Osage-oranges had begun to drop their enormous fruit along the road edge, as they have done since glacial times. Their old vectors, the mammoths and ground sloths of the Ice Age, are extinct, leaving squirrels, curious humans, and dogs to ponder what, if anything, can be done with them. 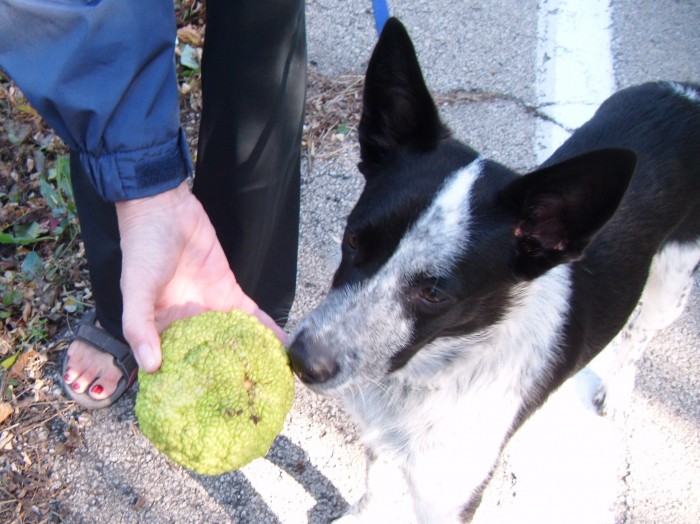 Since last summer, the hedges had been cut back hard by utility crews. Utility pruning often drives residents crazy, but oddly enough this harsh treatment unintentionally aligns these Osage-oranges back towards their original nineteenth-century function as hedge-like barriers to the cattle that no longer graze the meadows on the other side. 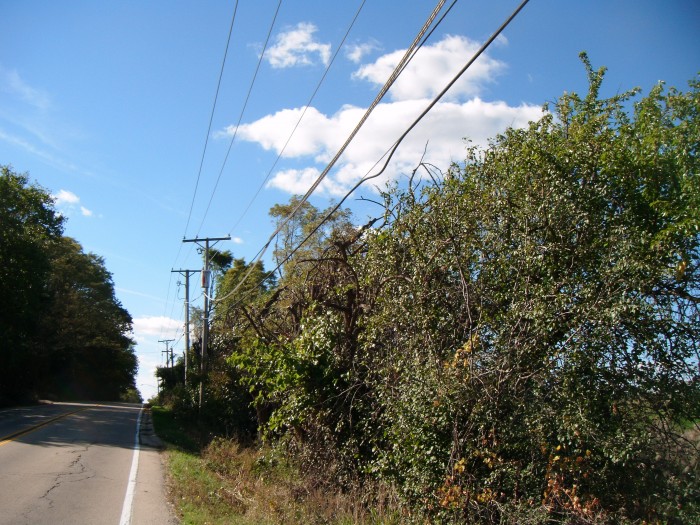 These hedgerows evoke the feeling of trees in limbo, planted over a century ago for a role they no longer serve, a role that was overtaken by wire fences. In the British Isles, the loss of hedgerows in the twentieth century caused alarm among those who knew that they sometimes represented the only scraps of habitat for birds, mammals, and insects left in landscapes that were otherwise completely managed for economic purposes. Hedgerows became harbors of biodiversity by accident—and that was the primary reason I found myself counting birds on Mundhank Road last summer.

I’m unapologetic for my affection for hedgerows. Recently, in northern Illinois we have become expert at adapting marginal areas with hope for the future. The former Joliet ammunition works, the old I&M Canal, and even tracts within the environs of Calumet Harbor are now what serve as natural areas of the future. Here in the new century, the landscapes in Chicago—and well beyond—are for the most part spoken for. If we are going to try and give something, anything back to nature, where else can we do it except the margins? There are miles and miles of linear possibilities out there, landscapes that are a long way from the ideal. Mainly unseen, we glide over many of them on the El and pass by them in our cars. These are not places for the purists, but rather the adapters among us.

When I was a little kid in the south suburbs, I found a box turtle under a row of Osage-orange trees that grew around the corner from me. I guess that, nearly fifty years later, I’m still looking for life on the edges.