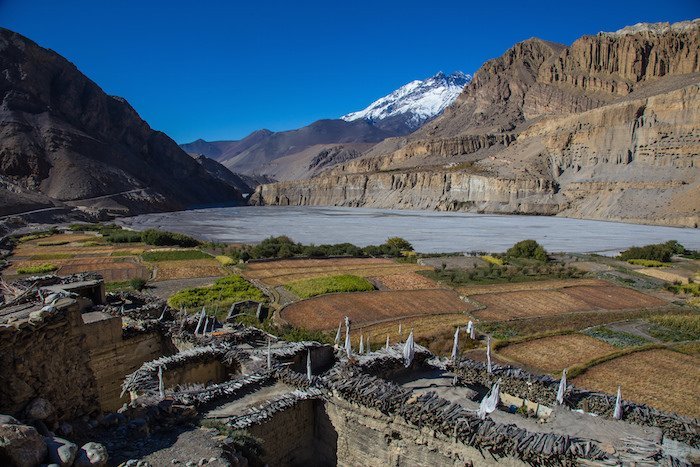 Disciplined as a scientist, my imagination is poor. Listing the various proposals that are springing up from the degrowth movement and pretending that they form a coherent vision would not be sincere. It would also be boring. Let me then describe the vision of someone with a richer imagination.

Welcome to Anarres, the planet of “the dispossessed” in Ursula K. Le Guin’s award-winning (social) science fiction of the same name.[1] It is a planet settled by anarchists after a revolution in nearby, Earth-like Urras, which ended up organizing an exodus to Anarres. Anarres is a barren, dry place:

Humans fitted themselves with care and risk into its narrow ecology. If they fished, but not too greedily, and if they cultivated, using mainly organic wastes for fertilizer, they could fit in. But they could not fit anybody else in. There was no grass for herbivores. There were no herbivores for carnivores. There were no insects to fecundate flowering plants; the imported fruit trees were all hand-fertilized.

On Anarres, wind is used to produce energy. Water and heat are scarce and economized with great care. Nothing goes to waste; everything is recycled.

Settlers brought with them values that helped them survive in this limited biosphere. Mutual aid through sharing and giving are the organizing social principles. There is no private property on Anarres. People “have,” they do not “own.” “Egoizing” is a major curse and “profiteering” from exchange is considered the ultimate anti-social behavior.

In Anarres there is a patchwork quilt of small urban centres with peripheral settlements. Each settlement follows the principle of an “organic economy,” aiming to survive to the extent possible with its bioregional resources—the water, wind, and soil in its vicinity. When this is not enough, resources move between locales upon need. There are no borders on Anarres, nor local identities; individuals can—and constantly do—move between settlements. No need, therefore, to capture and control resources or cheat about your needs. 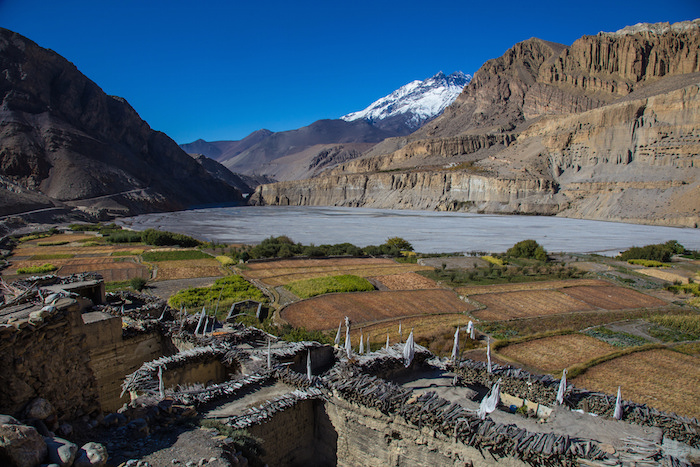 The scarce amenities in the towns are shared. There are no private houses, but dormitories with common rooms that house four to five people each. There are also single rooms for couples or families that prefer privacy. There are big dining commons organized by each dormitory or run by worker cooperatives, and professional associations for their workers. There are plenty of open public spaces and playgrounds, with dry sand, of course. The little water is shared in public baths, where people meet and socialize daily. People move using electric trains and small buses. There are plenty of bicycles and a few cars that are shared by all citizens. Traveling takes days, and so does communication by post. Manufacturing workshops are located in the towns, their doors open to the main squares of the cities.

Production is organized in voluntary cooperatives and associations. Each individual has the freedom to associate with or start her own productive enterprise. There is no profit to be made or property to be capitalized and, hence, no incentive to expand beyond what gives everyday satisfaction and fulfillment. Every ten days, each Anarresti must devote one day to communal work. People work six to eight days of every ten, for four to seven hours a day. Working is voluntary, but almost everyone works, as there is little else to do and strong contempt for those who don’t. A central computer matches workers’ preferences for job placement with the needs of different cooperatives. People specialize, developing their own skills, but also contribute regularly to common tasks of cleaning, building, and maintaining public infrastructure. Every four years, an Anarresi has to spend six months reforesting the desert or accomplishing some other major public work. There are no wages. The basic needs of food, housing, heating, and transport are collectively provided; people use their creativity to provide for the rest. Resource allocation is coordinated by a central committee with subdivisions in the various settlements. It provides food directly to the dinner commons and organizes the construction of public works. The members of the committee are drawn by lottery, while more permanent members are democratically elected; none stays in power for an extended period of time.

Arts, pure sciences, and the humanities thrive on Anarres. Since there is no profit to be made or intellectual property, there is no applied science, and productive technology has no reason to advance. Anarresi brought with them technology, equipment, and advanced knowledge from Urras. They have preserved and renewed these resources but have not expanded them.

Anarres has no military or police. What, then, holds it all together? No one threatens to invade Anarres, as there is nothing to gain and no one wants to live there. As there is no property, there is also no theft. The community contains the occasional individual violence. Make no mistake; there are plenty of indirect punishments and sanctions for anti-social behavior, and a strong communal ethic and set of norms keeps everyone in line. Those who free-ride and “egoize” or who wish to own things are ostracized from the community. They are free to move out of the town, but if they want to own, they are on their own—no collective provisioning exists for those that the Anarresi call “privateers.”

Life is hard, dirty, and frugal by Urras’s standards. But the Anarresi have one another and are connected by their common past and fate. In good years, there are plenty of festivities to burn and enjoy the surplus (there is no accumulation for investment on Anarres). In bad years, though, when the drought hits, rationing applies and people may be posted to jobs they hate. The Anarresi very seldom go hungry, but when they do, they go hungry all together.

Anarres is not an Eden. Everything is transparent on Anarres, and there is no hiding from the gaze of others unless by departure. Anarres is not a place for the secluded, the lonely, or the individualistic. For those ostracized, Anarres is hell. And for those wishing to differ and push the frontiers of knowledge or of their individual creativity, Anarres can be stifling. Power has been horizontalized, but unavoidably, some individuals have gotten privileged access to the core institutions of distribution. And with every drought, bureaucracy expands and eats more and more of the scope for voluntary association. There is no police force or physical violence, but rather a brutal, invisible mental police, a common rationality, and a network of norms that makes everyone stick to their duty even when they think they are free. But everything is also up for grabs. Permanent revolution is the motto of collectives that emerge to openly criticize centralization, the Central Committee, and the emerging elites in order to create their own alternative structures.

Is Anarres a utopia or a dystopia? Is it a degrowth vision? Is it a future that appeals to me, or is it a post-apocalyptic landscape that I predict Earth is heading toward?

The achievement of Le Guin is that she presents neither a utopia nor a dystopia. She describes an alternatively organized human society as is, with its goods and bads.[2] Science fiction is not predicting where we are heading, or dictating where we should go; it opens up possibilities to our imagination. Le Guin welcomes us to think how our life could look if we did not have property, money, and government and if we had to live within ecological limits. The point is not that we should live without money or property or to predict that we are heading toward an ecological catastrophe. The point is simply to force us to think the unthinkable. And having “seen it” in our minds, to consider again what we could change now, without boundaries to our imaginations.[3]

Many of the ideas Le Guin weaves together—worksharing; reduced work hours; co-housing, transport, and consumption sharing; horizontal and direct forms of decision-making; ecological limits and bioregionalism; open borders; cooperatives of production and consumption; technological preservation rather than advancement; frugality and festival destruction of surplus—feature in degrowth debates.[4] Some are already practiced; in Barcelona, where I write, we have an excellent municipal system of bikesharing and a thriving sector of producer-consumer organic food cooperatives. The people who took to the squares of Barcelona in the 15M (or “occupy”) movement called for direct democracy and practiced horizontal forms of decision-making. I do believe that the future of a prosperous non-growing economy passes inevitably through such initiatives and reforms, even if the end result cannot—and does not need to—look exactly like Anarres.

Is Anarres an appealing future? For those practicing degrowth in various eco-communes and co-housing initiatives in Europe and the Americas, there must be something strikingly familiar in life on Anarres.[5] Despite what to others would seem to be hardship, they enjoy the way they live, as do the people of Anarres. Ultimately, the beauty of Anarres is in the eye of the beholder. Having gone through the 350 pages of the novel, I side with the protagonist, who at the end prefers to live and fight for change on Anarres rather than on Urras. You should read, think, and decide for yourself.

[1] Ursula K. Le Guin, The Dispossessed (New York: Harper Collins, 1974). Ursula K. Le Guin is one of the most prolific and successful science fiction writers (www.ursulakleguin.com/). Her fantasy of alternative social worlds is not coincidental: Le Guin is the daughter of one of the founding fathers of modern anthropology, Alfred Kroeber.

[3] For an excellent academic treatise of utopian thinking and its role in politics and current debates over socio-ecological alternatives, see David Harvey,  Spaces of Hope (Berkeley: University of California Press, 2000).

[4] After reading The Disposessed, I came upon a footnote in a book by eco-philosopher Andre Gorz, considered one of the intellectual referents of the degrowth movement, who also thought that Le Guin’s Anarres is the most lively and fleshed out description he had seen of a frugal, non-growing, non-hierarchical society. Interestingly, Gorz was rejecting in his essay an Anarres-type possibility of a drastic simplification of contemporary complex societies. He called instead for radical eco-social-democratic reforms within the current mode of organization, confining capitalist relations to a limited sphere of industrial production.