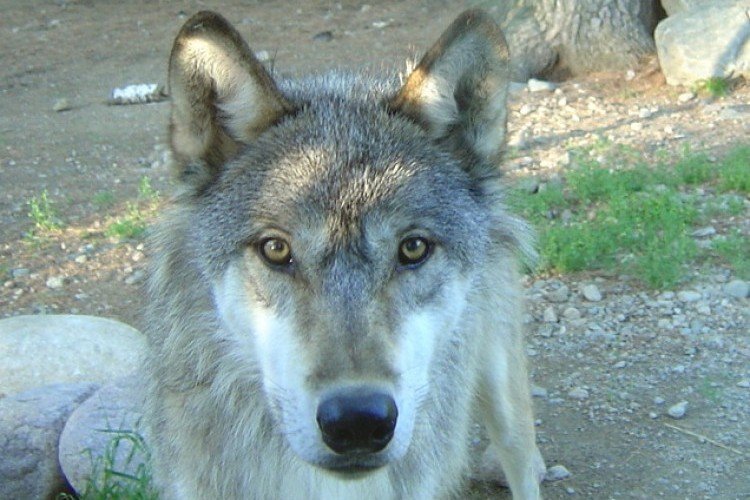 “Erasing the awe-inspiring variety of sentient life impoverishes all our lives.” ~Joanna Bourke

Nearly 20 years ago, I went to northern Minnesota to run with the wolves. Or at least buzz them from a bush plane. It was in February and the temperature when I arrived was in the single digits.

The three-day Wolf Weekend—a “learning experience” open to the general public—was co-sponsored by the International Wolf Center and Vermillion Community College, both in Ely. I even earned a college credit in Deer/Wolf Ecology, a welcome addition to my humanities-laden resume.

Our little group of eleven included two retired couples from Nebraska, two male school teachers from Minnesota, two amateur and deadly serious wolf enthusiasts from Colorado, and the most fun—and likely bewildered—people in our group, the young loquacious Kenny and his girlfriend Nancy from Chattanooga. Kenny’s mother had won the trip in a sweepstakes contest then handed it off to Kenny and friend.

For me, the highlight of the jam-packed weekend—lecture and slide show, Friday night howling, dog sledding, cross-country skiing, and seeing a wolf pack from the air—was bushwhacking our way on snowshoes into the Superior National Forest. We were in search of wolf kill—the meat, bone, and blood of some hapless deer, the wolves’ primary prey. Where I come from, most deer are killed by SUVs, so I was curious to see how it worked in real life. 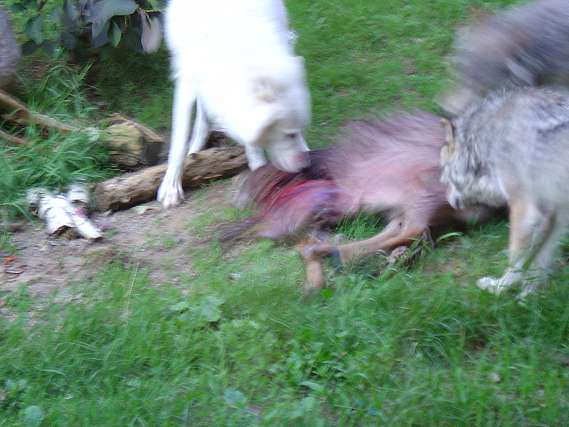 At the kill site on that cold Saturday morning, staring at the blood-stained snow, the bits of deer fur snagged on tree bark, our group stood in a hushed circle and learned from our guides how wolves bring deer down, how they eat almost everything the deer offer up in their dying, including the very marrow of the deer’s bones.

Yet perhaps most important from that frigid morning, I learned the etymology of the word “bushwhacking,” having been slammed in the head and twice knocked over by multiple tree branches along our ¾ mile hike into the woods. (The snowshoes were the problem. Walking through deep heavy snow with the equivalent of tennis racquets strapped to my big heavy boots pretty much distracted me from every low-lying branch in my path.)

I’ve kept several mementos from that trip into the wilderness—including an envelope marked “Deer hair from wolf kill site 25 Feb 95 Minnesota”—an experience I’ve come to see as some twisted version of the City Slicker story: 51-year-old woman, irredeemably urban and with attitude, treks into the northern woods for a wild animal encounter, specifically to meet a wolf face-to-face. 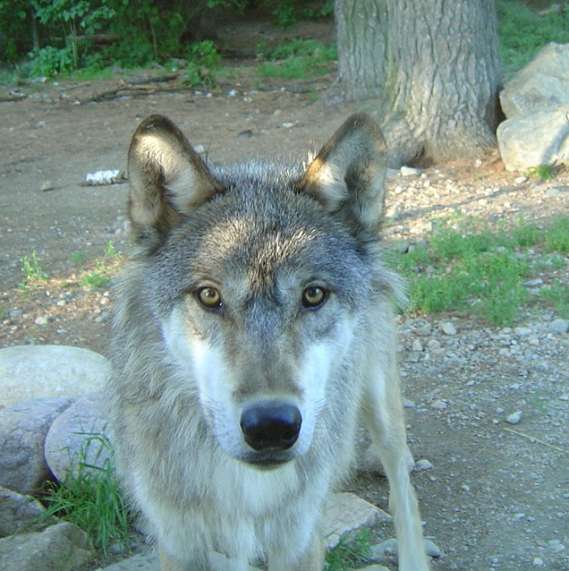 Perhaps, though less costly and travel intensive, for the same reason I wandered down the block in my West Rogers Park neighborhood to go cluck with the chickens: a perpetual need to encounter the Other.

I first discovered these creatures, six hens and two roosters, not long after their co-owner, Barb, a 36-year-old special ed teacher with a big handsome Rottweiler named Tyson (a little irony there), built them a sturdy coop in the corner of her backyard. That was seven months ago, just after her long-time college friend Mike convinced her to go halfsies on the chicken venture, he with his master’s in biology and a childhood spent raising animals, and she with the big enough yard and a desire to live more naturally and know more intimately where her food comes from. As Barb told me, “These gals are kept for their beautiful, nutritious and delicious eggs.” 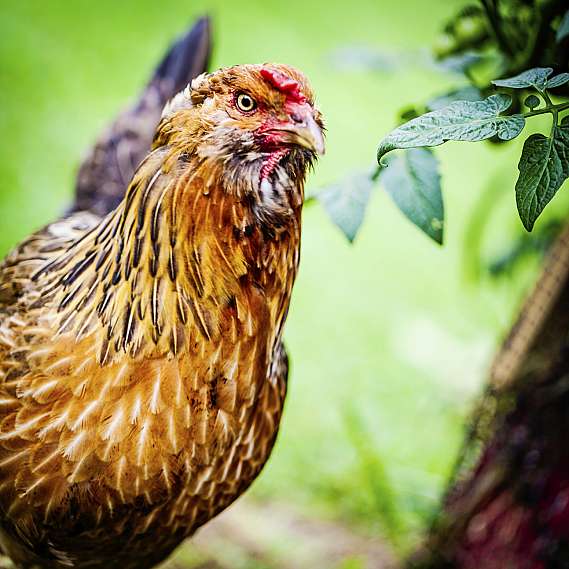 And though over the months I’d briefly glimpsed a chicken here, a chicken there, while walking past her backyard, only recently did I get a good long look at the whole mob. I was headed to Indian Boundary Park on a mid-afternoon weekday, hoping to again see a Cooper’s Hawk soaring over it, or, better yet, a coyote or two darting through it.

Close relatives of the wolf—our own urban version—coyotes are rumored to make their home on the golf course in Warren Park, though they frequently make their way across both Pratt and Western Avenues, unsettling some of my fellow bipeds as they appear from behind buildings or alley garbage cans. Of course, had I done my homework, I’d have known that coyotes usually kept themselves well hidden in the daytime, coming out at night, early morning, or at sunset in search of food.

Daytime though—on this particular day—turned out to be a fine time to view chickens. There they all were: six hens—five Ameraucana, golden/yellow orange in coloring, and one Marans, a lovely purple-ish black. There were also two huge Blue Copper Marans roosters, big fellows who had matured into Roosterhood, then began their inevitable crowing, violating a city noise ordinance that would soon send them packing to a local farm.

But not before I had the chance to admire them, leaning into the chest-high cyclone fence, a big stupid smile on my face, watching for what seemed hours as these lovely creatures high stepped about the yard, pecking, scurrying in and out of their clutch, the roosters with their punk-rock, fire-red combs strutting and cock-a-doodle-dooing.

And then they all came over to me.

Artist and writer John Berger wrote in his essay “Why Look at Animals?”: “With their parallel lives, animals offer man a companionship which is different from any offered by human exchange. Different because it is a companionship offered to the loneliness of man as a species.”

As a writer, I struggle to describe the meaning of that loneliness, one I believe is created by human language, the most prominent thing that separates us from other creatures, especially the wilder ones, the ones that don’t sleep in our beds, or that we give cutsey names.

Over the years, I’ve been able to describe my encounters with those animals—the who, what, when, and where of the wolf pack in Minnesota, the buffalo in Montana, the opossum in Andersonville, the Great-horned Owl in Morton Arboretum, and that bunch of big birds in Rogers Park.

But I’m not sure I can tell you the why, although, as with the chickens, I stand still enough and hope they’ll come to me.