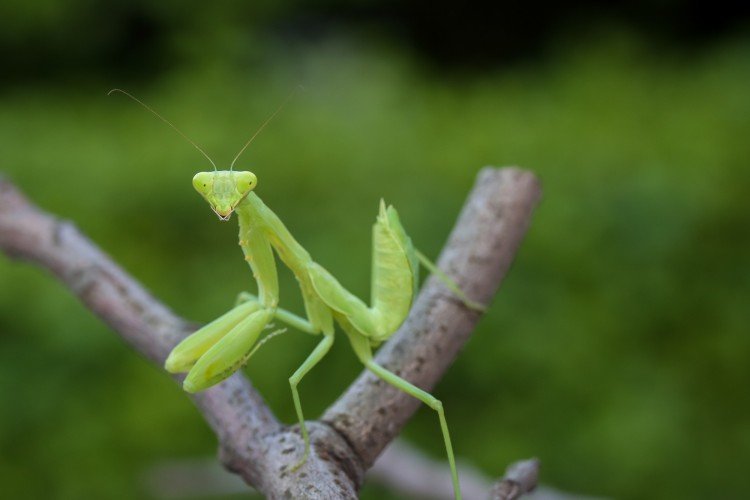 It’s because my grandfather was a Scot that he allowed a large, fuzzy black spider to live on his bathroom sink behind the talc, the toothpaste, and his jars of lotions and creams.

I remember traveling in a car with him when a gangly, beige spider swung in through the open window toward my mother, who was driving. I shouted to her, “A spider’s going to crawl up your shoulder!” She screamed back, “Quick get it off!” My grandfather, calmly sitting in the passenger seat, simply said, “Don’t kill a spider. A spider saved the Scots.”

We pulled over and my mother pleaded, “Find the damn spider.”

I searched her blue seat while Grandpa recited: “A spider saved King Bruce when the English chased him through the woods. Bruce jumped into a hole and a spider spun a web over the top. When the English found the hole they said, ‘No one could be down there because the web would be broken.’ King Bruce was saved.”

My mother lost her battle; the spider disappeared under her seat.

Scottish legends aside, people are forever battling insects and, in the case of spiders, arachnids. Arthropods all.

In Manhattan, where I lived for many years, a perpetual war is fought with cockroaches on several fronts: inside, outside, any and everywhere. Which is why I stepped back, stunned, the day I spotted something not a roach: A praying mantis. A mantis seemingly sunning itself in a bush on my Upper East Side block. Here? I thought, in Manhattan? 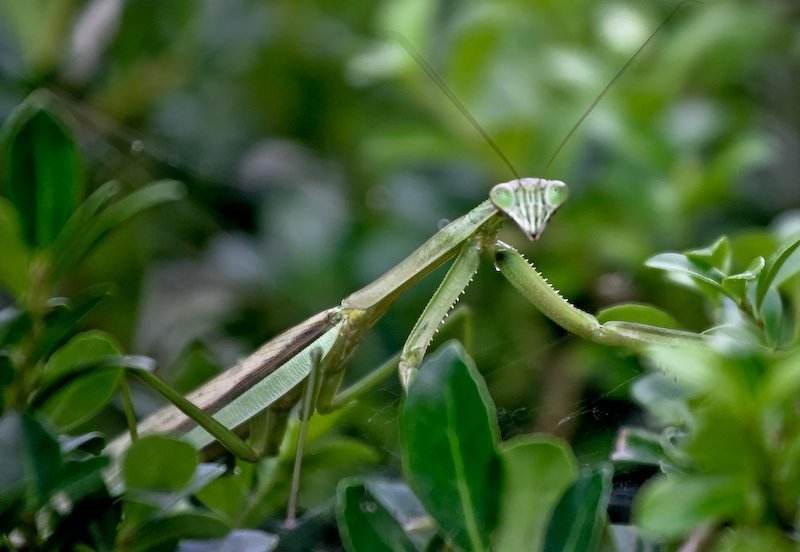 A praying mantis is a mad prophet, at least according to the Greek meaning of the name. Although mantis literally means diviner—no doubt because when the insect eats his prey he clasps his victim in his extended forelimbs, as though praying—the word also is related to mainesthai, the Greek way of suggesting “That’s Crazy.” Which brings us to the female mantis, who, from a human’s point of view, practices some fairly crazy mating behavior.

“You may have heard about them,” I said to a curious old Eastern European couple who stopped to see what I was staring at in the bush.

“It’s a praying mantis!” I exclaimed, clearly overexcited, since in all my years living in Manhattan, I never saw a mantis in the city.

“No. We never see one before,” said the wife.

“Well, if this is a female who finds a male in the city to mate with, then she will eat his head while they mate.”

“Go,” said the husband as he started to walk away.

“Really, she’s lethal,” I told the wife, “because she will bite off his head and eat him, while . . . . well, it gives new meaning to ‘love makes you lose your head.’”

“But it nourishes her.”

“Well, at first it’s just his head, which essentially kills his inhibitions . . . so his headless body keeps . . . (I suddenly was at a loss for words.) . . . afterward she eats all of him.”

“Hmmmm,” she said, glancing at her husband. “You tell a good story.”

. . . lie—or a good story—depending on how you view a parent’s introduction of magic into the life of a child.

For twelve years—from my fifth to my seventeenth—I believed my father told the truth when he said, “Molasses!” as I opened my summer suntanned fist to reveal my latest grasshopper catch, who quickly catapulted from my hand, leaving behind a brown, liquid smudge.

I can still see my father saying it, in a slow and educational way, as he pointed to my small palm: “See. That brown spot there. That’s molasses.”

It made sense, the way I understood the world then. Other creatures delivered similar mysteries: honey from bees, silk from worms. Maybe because my mother did not make molasses cookies, or, if she had molasses in the kitchen she kept it in a dark corner of the pantry, I never questioned my father’s explanation. For twelve years. 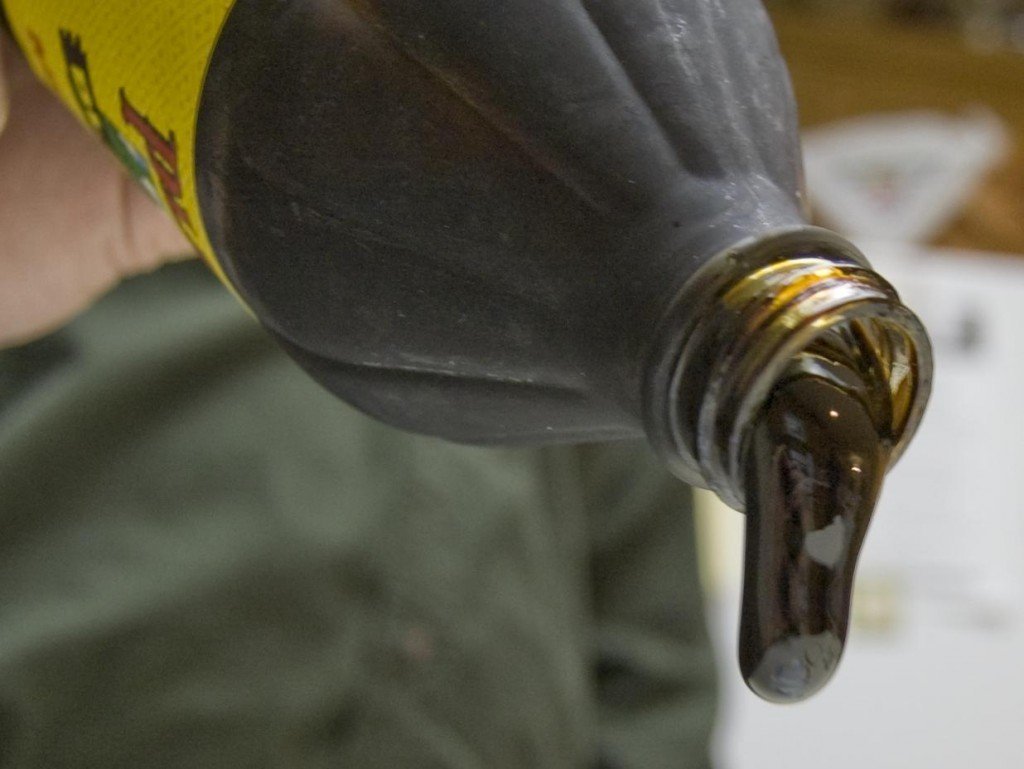 By the time I had a high school boyfriend and was at his house for dinner—the first dinner—I noticed, above the plates, on the highest shelf in the cabinet, a tall and dusty bottle of molasses.

“Do you eat that stuff raw?” I asked him, pointing to the molasses.

“Sometimes we drizzle it over granola. Or over pancakes, it’s good.”

“Do you know where it comes from?”

Ten years later I was studying orangutans in Borneo, where, besides finding leeches inside my pants and sucking on my ankles, something else, invisible, bit or stung or burrowed into me in that dark and beautiful rainforest. Its powers did not kick in until I was flying home over the Pacific, when my right arm, from my elbow to my shoulder, began inflating.

“Are you sure the insect is not in me?” I asked the tropical medicine doctor the day after I returned from Borneo, as I sat like a specimen in his shadowy Fifth Avenue office in Manhattan, replete with African art, totem poles, and stuffed wild animals.

“It bit you,” he answered, “and that’s why you have these symptoms.”

My arm was by then swollen large as an overripe eggplant and covered in red dots.

“Do you have gastrointestinal problems,” he asked, without looking at my face. “Do you have those? You could bring in a stool sample.”

“Then go see a dermatologist.”

“No, it’s not in you,” the dermatologist informed me. “It’s not even on you,” he continued, as he nonetheless put on rubber gloves and a mask to examine my arm.

“You’d have to ask the tropical medicine doctor.”

“Fill this prescription. Use this cream twice a day for two weeks.”

The symptoms went away, for a while. But they returned. When I was nervous, upset or worried, lines of red dots appeared as perfectly spaced apart as geese flying over my skin. I concluded back then, and sometimes still today when they pop out, that the red dots are the “voice” of some tiny Bornean visitor who lives inside me, somehow. A messenger, of sorts, who goes away when I calm down.

Now that I’m a parent myself, I have to admit there is a certain inner strength that my daughters emulate when I remain calm in the presence of insects and arachnids, of which we clash with daily in our barn. After all, besides arming yourself with clothes and repellants, there really is little you can do.

To further my daughters’ fortitude in the presence of the multi-legged among us, I tell them the following story . . . .

In graduate school at New York University, I volunteered to research long-legged wading birds roosting near Staten Island. The work required trekking through the forgotten forests surrounding the then biggest trash dump in the country, where the birds had established an unlikely urban utopia. After each day spent weighing and measuring baby birds, which required sitting with them on the ground, I boarded the Staten Island Ferry home.

One day, across from the Statue of Liberty, I began feeling inordinately itchy and walked to the bow of the boat, where I shook myself like a wet dog as I took off my hat, the bandana I wore under my hat, and my loose outer tee shirt—all of which I wore to protect myself from the insects crawling, flying, and living in the forest with the birds.

But on the next leg of my trip home—the subway ride during the NYC evening rush hour—I sensed the tickling of little legs just after the Wall Street stop, where all the polished passengers had boarded, holding their briefcases and dressed in their suits of Calvin Klein or Brooks Brothers.

As hard as I tried to act more normal than I actually looked—which was dirty and smelly from bird vomit and feces—I couldn’t ignore the meandering movements of the multi-legged flourishing under my clothes.

I was forced into battle.

Number one, I caught behind my ear. Two, on my shoulder. Three, going down my back. Four, across my stomach. Five, at my hairline on the back of my neck. I hoped it would end with those five ticks tucked in my fist, as I sat alone on the subway, everyone having by then moved as far as possible from the ghastly site of me. To avoid a stampede, I decided against throwing the ticks to the subway floor and steadfastly cradled them in my curled fingers.

I did not enjoy the experience.

I did fear they would burrow into me by the time we reached 42nd St.

At the same time, there was an insistence about them that at that moment I was forced to understand: they had a job; they were doing their job. In the proverbial web of life, they are the lonely—or is it ostracized—outer threads helping to hold together the entire structure of our existence. Eventually something bigger comes along and does its job, or they die of old age to return to the earth as biomass.

Alas, my job as concerned the five ticks in my fist was to set them free into the tracks at Grand Central Station.

Still, there are times I enjoy the company of similar beings. In summer, sweat bees can’t resist lapping up the salt of our personal streams; and I consider it a test of my patience to see if a dragonfly the color of clover or lemon or lilac will land on my warm body in the sun by a pond. In the fall, I sit for long spans of time at dusk watching autumn’s spiders weave their dungeons in the corners of my horse stalls. 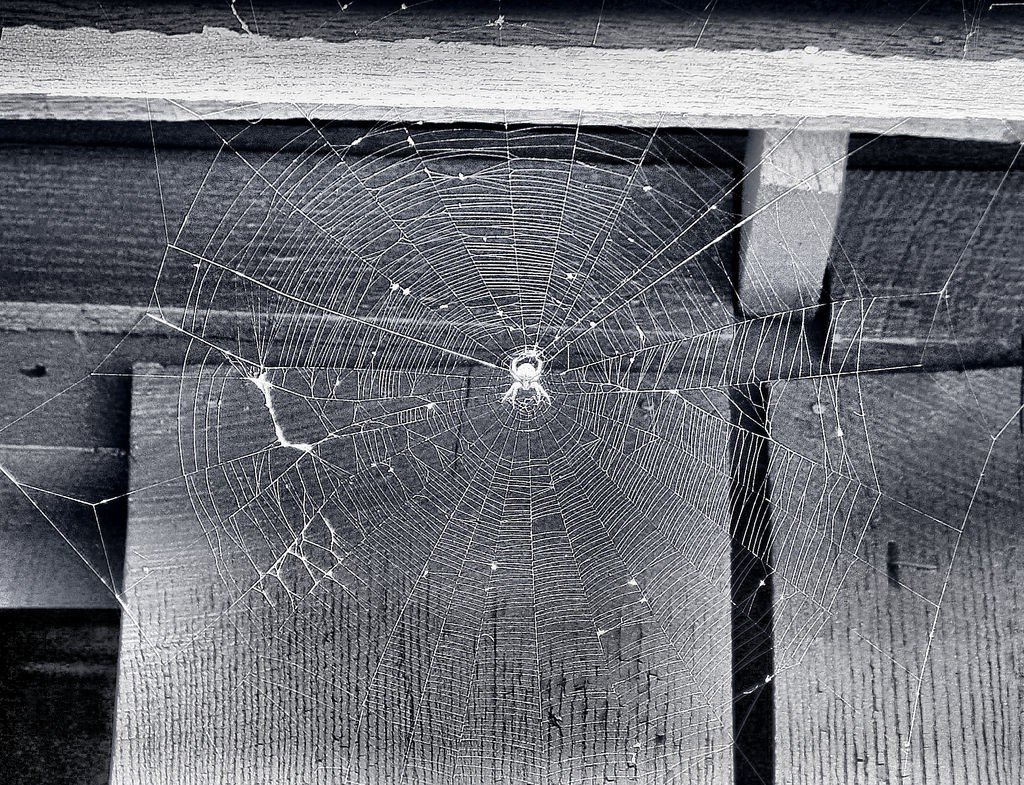 A few weeks after I returned from Borneo, when my arm was still deflating, I met two girls, about eight years old, standing in front of their Upper East Side apartment building. They caught my eye and asked, “Do you want to help us save the rain forest?”

“What are you going to do with the money?”

“Buy seeds for trees and send them to the rain forest.”

“Okay,” I said, looking at the stickers of the Road Runner cartoon character running in a cloud of dust and carrying in his beak a sign that said, GOOD WORK. “How much are your stickers?”

“With our autographs, fifteen cents. Without, ten cents.”

“I’ll take two, one with each of your autographs.”

While they were signing my stickers, I told them I’d just returned from the Bornean rainforest and asked if they knew what lived there.

“Animals!” yelled out one. “We studied them in school.”

I grabbed whatever loose change I had out of my pockets and thanked them for saving the earth and left.

Several steps away from them, one of the girls called out to me, “Oh, and bugs, too. In the rainforest. Lots of bugs in pretty colors!”

I like to think they were girls who grew into women who walk through the suburban grass, or through the city streets, as I still do: careful not to squash the makers of molasses, or the mantis of Manhattan.