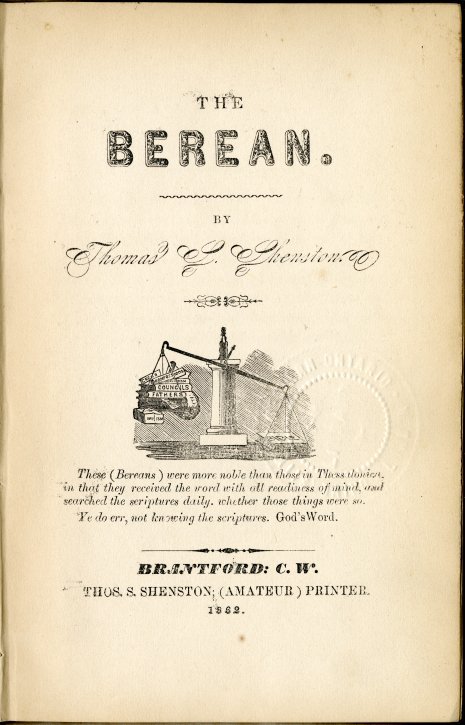 But for the present American war, this little volume, long ere this, would have issued from the American Baptist Publication Society of Philadelphia . . . but since the commencement of hostilities, that very useful society has published no new works.

And thus, T.S. Shenston was forced to self-publish his book in Brantford, Canada, a town without a publication society. Right up front, Shenston admitted he was an amateur printer, and he proved it by breaking every rule of typography. The result is a visual nightmare—hodgepodge of typeface, vertical and circular text, bolded phrases, frantic use of italics and exclamation points—it yells so loud your ears hurt. On the final page, Shenston apologizes for the book’s appearance and its many typographical imperfections. Apology accepted.

After all, The Berean wasn’t intended to be refined and handsome. Rather, Shenston set out to publish a straightforward argument for common folk who, like the Bereans in the Bible, were ready and willing to believe the truth. Well, Shenston certainly hoped folks would believe the truth: that our Lord’s final commission—Baptism—was to be administered by immersion of the whole body. One must be overwhelmed by water, not merely splashed in the face with gentle droplets! This was a defense of baptism done Baptist style, giving EVERYTHING God has said on the subject. Not at all ecumenical and “not too Doctor-of-Divinity-ish and Master-of-Art-ish.” Shenston then proceeded to quote a couple dozen Doctors and Masters, like Robert Alexander Fyfe, Samuel Clark, and W.J. Conybeare.

Christened at birth in England and immersed as an adult at Brantford Baptist Chapel, Shenston was dead set against “Infant-Sprinklers.” He made that clear with copious proof-texting and the oft-repeated exhortation that only those old enough to believe in Jesus should be baptized. It took him months to set up type on his one-person flatbed printing press, ink the rollers, and crank out all the pages. Eventually he stockpiled enough copies to sell at local shops and to give away to Theological students at the Canadian Literary Institute, where Fyfe was principal.

Thomas Strahan Shenston, registrar and magistrate of the newly-formed county of Brant, Ontario. Compiler of county statistics and useful information. T.S. had known his fair share of business failures by the time he wrote his treatise on baptism. Early on, his saddler’s shop and home had been destroyed by fire. Neither was insured. Fortunately, his family was spared—his daughter just three, his son a baby. But Shenston was not one to let failure define him; through cunning and sheer energy, he mastered several trades—including the fire insurance business—and brought his influence to bear on a number of Baptist and civic organizations. In his spare time, he authored religious tracts on topics dear to a Baptist’s heart, annotated by an avalanche of scripture passages. “Ever busy with his pen”—that’s how the editors of the Canadian Biographical Dictionary and Portrait Gallery of Eminent and Self-Made Men described Shenston. And zealous. 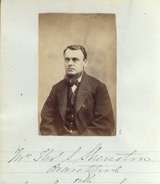 The same could be said of his daughter, Naomi Ann Shenston. She, too, was busy with the pen, zealous to defend an acquaintance, Mary Ann Bailey, whose fiancé had jilted her. The jilter was Eben Rice, a theological student at Fyfe’s Institute. Naomi knew Eben well enough to place herself in the middle of his broken engagement—he was a classmate of her brother Reuben, and when he came to Brantford, he sometimes stopped at the house for tea. All three attended the Baptist chapel and occasionally wrote newsy letters to each other. Once, Naomi had written confidentially to Eben, asking him to talk with Reuben about his soul’s welfare. She had faith in Eben’s ability to nudge Reuben toward Jesus.

But Naomi’s faith in Eben had lessened considerably. How many drafts she wrote, we can only guess, but just like her father, Naomi crafted a heavy-hitting argument and laid on the guilt:

Esteemed Friend, Providence seems to have directed my step hither at this time. I little thought that such a duty as the present awaited me. I came down on Thursday last, and much to my surprise found Miss Bailey here. Your letter was received by her yesterday and I need scarcely say it has completely prostrated her. . . . The blow, though I think not altogether unexpected, has proven too great for her . . . it has completely shattered her nervous system. I do most sincerely regret that you have deemed it your duty to take such a step. . . . I trust that you have not rashly and unthinkingly blighted and blasted the hopes and happiness of one of earth’s lonely ones.

Perhaps Naomi, too, was one of earth’s lonely ones, though on her surface she may not have seemed so. She was baptized when she was twelve and grew up in Sunday school. And throughout that entire time, her father was superintendent of the school, treasurer of the church, a deacon, and financial backer of the church’s mission project. Twice the Brantford chapel burned down, and twice her father helped rebuild it. Naomi and her father took their religion literally, read their Bibles, believed in Jesus, and put their money where their mouths were. But they did not see eye to eye when it came to matters of the heart.

Two months after admonishing Eben for taking a rash step, Naomi took an equally rash step—she married a man who did not meet her father’s approval. A printman, Richard R. Donnelley, recently returned from New Orleans, where he had been foreman of the daily newspaper True Delta. Dick was a seasoned veteran by the time he was twenty-six, with stints in his hometown of Hamilton, Ontario, then Chicago, then New Orleans. Now, with that abhorrent war looming in the states, he was back in Hamilton, partnering again with Alex Lawson, printing hymnals and books of poetry. 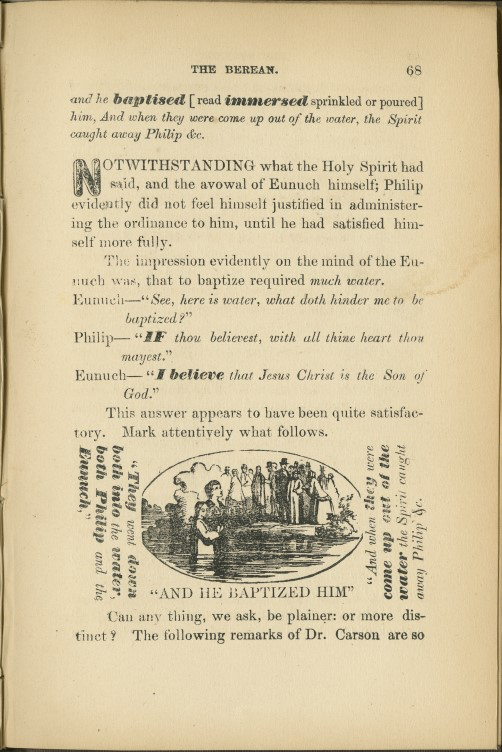 Perhaps Shenston didn’t consider Dick appropriate for Naomi because he was just a jobber with ink under his nails or because he was planning to return to the states or because he wasn’t a Baptist. Naomi was determined to marry him anyway, and Shenston retaliated by turning her out of his house. (And as she left, did he hand her a self-published missive with a title like “What the Scriptures Say about the Injurious Effects of an Unequally Yoked Marriage”?) The news spread around town and eventually reached Eben, who wrote of the ouster in his diary. Naomi and Dick lived in the area for a brief time, then moved to Chicago.

Things went well for the Donnelleys in Chicago until 1871, when many of the city’s stately buildings, including their home on North LaSalle and Dick’s printing business, were destroyed in a fire sparked by an ignoble lantern kicked over by cow or a human or a freak night wind. What started small quickly became hellish and jumped the river, its fingers of flame clawing farther and farther. Firenados, as they’re called now, tore through the heart of Chicago like dancing devils. When the fire ended two days later, three hundred people were dead and three square miles scorched. Thankfully, Naomi and Dick and their young children survived. But insurance failed to cover Donnelley’s business losses. (Does this sound familiar?)

Donations poured in from across the nation and from a small town in Canada—Brantford. Eight days after the fire, Naomi’s father arrived in Chicago, with the Mayor of Brantford, to coordinate distribution of relief supplies shipped down from Canada. Clearly, he felt compelled to do something, anything, to bring relief. At a time of devastation and ruin, there is always the need to give, to forgive, to give in.

It turns out Naomi was as steadfast a Baptist as her father. After the fire, the Donnelleys moved west of the city, and Naomi immersed herself in church work, faithfully attending Sunday services and prayer meetings, superintending sewing classes at her church’s mission, and co-founding the Women’s Baptist Home Mission Society. (Later, Naomi would travel to Oklahoma, as chair of the society’s board of directors, to deal with an Indian congregation facing disapproval for celebrating communion without an ordained minister present.)

When fire stopped the presses, Dick could have returned to his hometown and partnered again with Lawson, getting out the Hamilton Spectator newspaper. But he had bigger plans, and soon he was jobbing an ever-widening range of publications in his rebuilt five-story building at Clark and Adams on new-fangled steam-powered presses, printing “large, clear, open type which can be read with ease by young and old.” Dick was master of the dime novel business, and the two-hundred-plus volumes of his Lakeside Library—titles like The Wandering Heir, Going to the Bad, Terrible Temptation—were selling like crazy around the nation. As was the Lakeside Cook Book, written by his wife. So Naomi was not only a mother and dedicated church lady, but the author of recipes and household hints and useful information. Very much like father, like daughter. 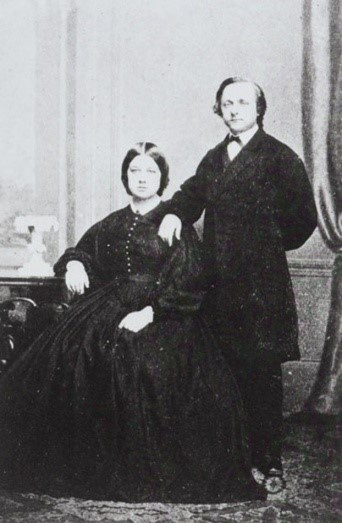 Years later, T.S. Shenston’s pen was busy again, with Gleanings, a compilation of excerpts from his favorite religious literature. In the middle of five hundred passages on topics like faith and prayer, trust and belief, he inserted a telling illustration of his own composing:

Suppose a kind father was to place himself in a deep dark cellar just under the trap-door leading to it, and his wife should request their six year old daughter to jump down through the trap-door into the cellar, assuring her that her father was in the cellar, and would assuredly catch her in his arms, inasmuch as he could see her notwithstanding she could not see him. Having full faith in her mother’s words, she makes the jump, and is safely caught in the arms of her father; and for which simple act of faith the love of her parents is intensified.

And thus, Naomi’s father, whose Bible was infallible and whose beliefs were dogmatic, made it a matter of the heart.

I know a little something about a father disapproving of his daughter’s future spouse. I know that when the father rebukes the daughter face-to-face or in a long typewritten letter peppered with Bible verses, it makes her cringe. But the daughter goes ahead with the marriage anyway. And for years, the denunciation lies still in the inmost recesses of the mind or in the bottom of a cardboard box stored in the daughter’s basement. As she moves on in life, from place to place and cause to cause, the box full of the moldering past moves with her. Then comes the day when the daughter and the father are drawn together because of some terrible event or natural disaster. And in voices singed with pain, they find themselves speaking clumsy words, words not for print. And disapproval has nothing more to do with it, absolutely nothing. Here’s the thing about the ties that bind: they last longer than condemnation.

Author’s note: The diaries of Ebenezer Muir Rice (1840–1871) were recently donated to the Canadian Baptist Archives at McMaster Divinity College in Hamilton, Ontario.