Mind-Body Unity as the Root of Moral Growth

Mind and morality meet on playing fields of flesh, in relationships—friends, antagonists, or lovers. Defined in brief by the Oxford English Living dictionary as “principles for behavior,” morality begins when limbs, appetites, and gazes are subjected to ideals. Otherwise behavior merely behaves, neither well nor poorly. Cultural ideas of right or wrong, like sporting standards, limit unpredictable behaviors, or at least soothe us with an illusion that the unknown has been reduced.

Necessary or not, moral rules allow the mind to coach the body as if from a press box. The resulting split strips lines of communication to flow one way, as if the player were given a mic-less earpiece to receive but not suggest plays. “Plays” then become performances rather than interactions, with the freedom to explore deemed suspect and the muted body presumed dumb.

Examples of this one-way moral communication system, from mind to body, can be found across secular as well as religious traditions. Children learn early to obey family or school dining schedules rather than their appetites. Christ is also revered for denying the body. For instance, many Christians point to the passage in Matthew 4:1-11, in which Jesus fasts for forty days and nights in the wilderness, as a triumph of spirit over flesh. But could his success against temptation during this time of fasting indicate that he was in profound communication with, rather than alienation from, his physical form? As a long-time practitioner of yoga, I am among those who celebrate a yoked body-mind as the ultimate radical (from the Latin radix for root) guiding moral progress. 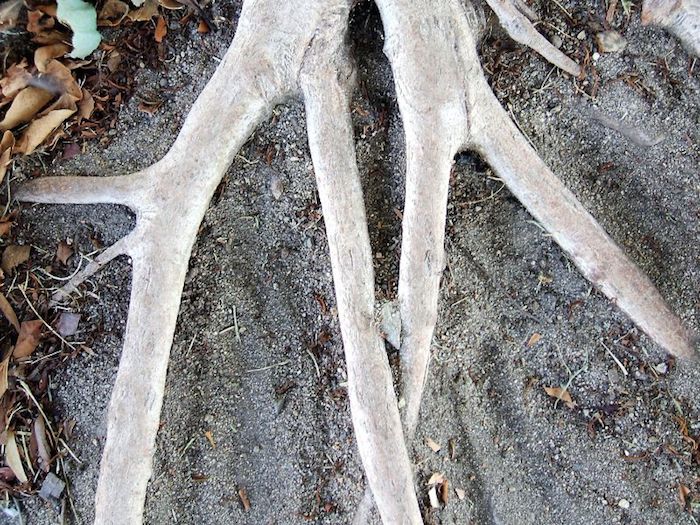 We are not accustomed to imagining roots as guides, but contemporary philosopher Michael Marder draws on recent plant research that reveals that plant root tips steer toward nutrient-rich patches of soil as clearly as their leaves turn and reach toward the sun. This discovery, among others in molecular and cellular botany, inspired him to rethink human intelligence using plant models.[1] He draws on scientific evidence that mind and body are integrative despite the Cartesian split that bifurcates our thinking, which Hester Oberman details in “The Matter of the Moral Mind.” Not as passive as they appear to our eyes, plants communicate with themselves, other plants, and their ecosystems through the soil as well as through airborne bio-chemicals. Reflecting on their decentralized processing methods, Marder reconsiders how our bodies also actively signal, interpret, and respond to their surroundings. He gives as an example how the middle ear distinguishes the sonic vibrations of dog barks from gunshots, or cat meows from police sirens. Neither dense nor inert matter, our senses actively translate the world around us; Marder values their contribution as an overlooked form of intelligence.

How might the unity of mind-body ground the “moral predicament” that those who suffer most from the effects of climate change are not the highest producers?[2] Acknowledging this unity makes it harder to dissociate from the corporeal earth we ingest, drink, and breathe. Bodies internalize nutrient degradation, biodiversity loss, and pollution. We are mistaken in thinking soil erosion and deforestation are local issues. We are linked by physical vulnerabilities that we share, even when we do not understand them due to prolonged suppression of our senses.

Though my example will be incomplete, an illustration may be useful. The first time I prepared insects for dinner, I altered a mushroom risotto recipe to include crickets. Mind and body experienced a divide due to years of conditioning to think bugs dirty or scary or wrong to eat. Yet even that wall of resistance was lower than I thought, as I plucked a succulent leg from the skillet. Against the pearls of rice I piled onto my plate, the crispy crickets, threaded with olive oil and Albariño, were thrillingly al dente. Utterly unfamiliar, this dish awakened my palate, stimulated wonder, and disrupted not only my principles for behavior but also what governed them.

When I ate shrimp the next day, their bulbous bodies in my mouth were alarming to my senses, and I recoiled at the textural comparison. Considering the plight of workers indentured to the shrimp industry, I can be grateful that mind-body connection steered me toward more eco-efficient landlubbers. Edible insects such as crickets, or Acheta domesticus, require twelve times less feed than cattle and six times less than pigs to produce the same amount of protein. They also produce a fraction of the greenhouse gases and demand less freshwater.[3] But the unprincipled senses operate without such analysis, and any corresponding notion of moral superiority. Before I articulated it, I was merely responding to a root impulse. I simply found myself on a field of play that was not ordered by a disembodied idea from above, but instead rippled in front of me with thrilling unknowns.