I recently discovered a bald-faced hornet nest in the blue spruce that overhangs my driveway. The basketball size paper orb hangs ten feet above the ground, tucked a few feet in from the end of its branch. 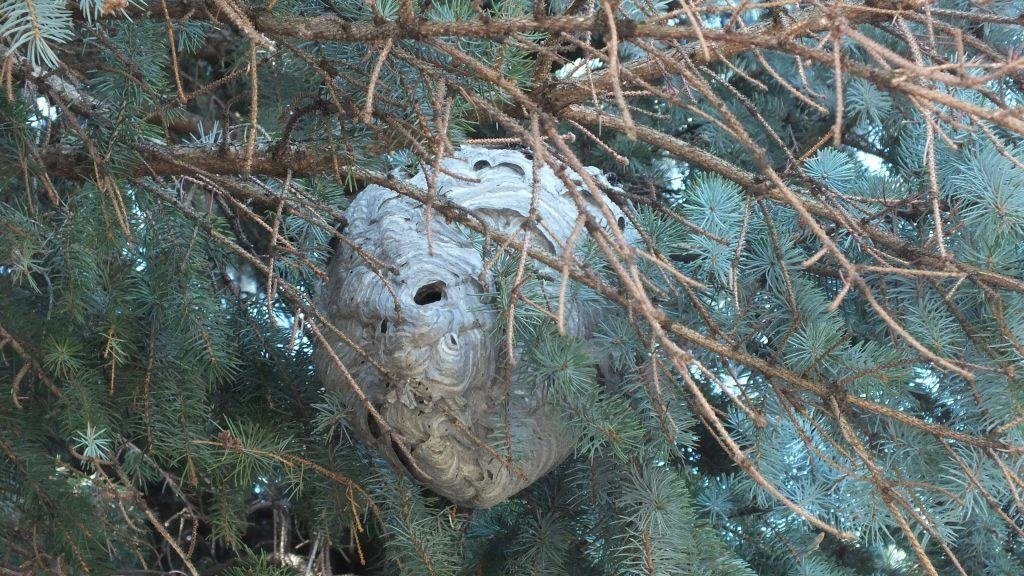 It’s a gorgeous complicated structure, built of layers and folds, scallops and creases that rival a royal gown. It’s one of those things that the more you consider, the more mystifying it becomes. The hornets make the paper pulp by chewing bits of wood, but how do they know what to do with those bits? What tells each hornet where to put her mouthful of paper so that she adds correctly to the architecture? Does she see the whole structure? Is someone in charge? Are there rules that explain it? An algorithm maybe?

It’s all a wonder.

But another wonder came when I went to research the hornets online: Why do people destroy these nests—these animals—with such delighted vehemence? Not just nests in their yards, destruction you might excuse, but even nests that are far enough out of reach to pose no danger. 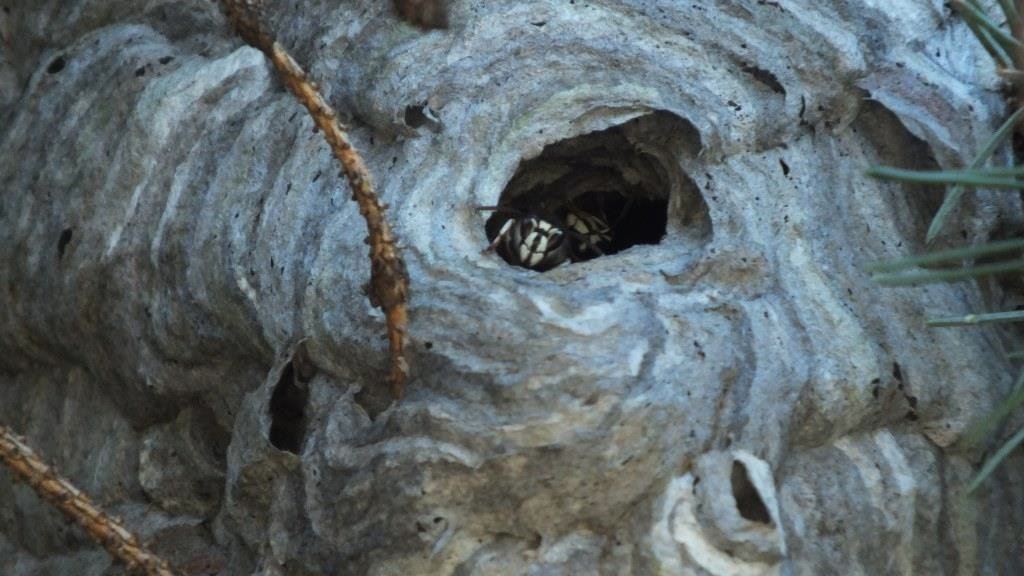 Bald-faced hornets (Dolichovespula maculate) are not really hornets. They are wasps of the yellow-jacket family.  But regardless—wasps, hornets, bees—these social insects, through their swift and painful stings, have efficiently taught humans and other animals to fear them. All it takes is one sting and a child will forever recoil from the buzz of a bee or the sight of a wasp nest. I’ve been stung a number of times, so I understand the aversion.

But what I don’t understand is the hostility. Until I saw what YouTube served up, I had no idea of the devastation wrought upon wasps and hornets. A guy with a 12 gauge blasts a hornet’s nest out of a tree in the middle of a field. Another shoots the “little bastards” with a paintball gun as part of his “Destroy” series. With unrestrained glee, men set fire to nests, spray them with water hoses, detonate firecrackers inside them, and use shop vacs to suck the animals out alive. And the crowd goes wild. One commenter states, “Starting fluid and gasoline are my favorite methods because I know they suffer.”

While the path of human history is paved with the corpses of species we have eradicated, this kind of vengeance-driven hatred has been reserved for only a select few, most notably wolves, snakes, and sharks.

People have always killed predators in retribution for human or domestic animal death. Villagers hunt down a tiger that takes a child. Wildlife officers shoot a crocodile that eats a retriever. Police kill a bear that threatens a neighborhood. But the “almost pathological dedication” (to use Barry Lopez’s term describing wolf hunters) to the wholesale extermination of a species is something else. It’s an act born of contempt and fueled by hatred; hostility evidenced by the unnecessary cruelty that such hunters inflict on the animals.

Men have set wolves on fire, dismembered them alive, poisoned them with strychnine, blown them up with explosives, choked them in snares, and shot entire packs from planes and snowmobiles. Snakes have suffered similar fates, being intentionally left to bake in the sun, having their teeth pulled out and their mouths sewn shut, and being cooked alive. Under the pretense of public protection, today rattlesnake roundups  and other organized snake hunts promote this reckless torture in a “family friendly” carnival-like atmosphere.

One wonders then, with such hatred for stinging insects, why nobody has organized a wasp hunt in which bounty hunters are paid for destroyed nests. Or maybe we have.

The first results in a Google search for bald-faced hornets are for pest removal services. Reading their websites, it becomes clear that there is no choice but to exterminate nearly everything you might encounter in or near your house. Mice, spiders, ants, and squirrels—to name just a few—are a “huge nuisance” that can “terrorize homeowners,” “spread dangerous diseases,” and “multiply faster than you think.” Even house sparrows are said to “forage aggressively.” It is fear-mongering at its finest.

If the potential customer didn’t fear (or notice) these animals before, he or she certainly will now and will gladly pay to have them exterminated. A quick online shopping trip tells me that bald-faced hornet nest destruction nets a bounty of $100 to $300, paid by the homeowner.

I don’t begrudge people pest control. Goodness knows I’ve done it myself. I have wielded swatters, spray cans, and traps and have used every bit of chemical weaponry available to rid an apartment of roaches and my cats of fleas. But there are mindful acts of pesticide and there is needless extermination. Not everything needs to go.

By the time most people notice a large bald-faced hornet nest, often in mid- or late-summer, it has already been there for several months. It was started by a single queen, newly emerged from hibernation during the previous spring. The nest’s residents, all born within the nest, have been buzzing along minding their own business ever since. 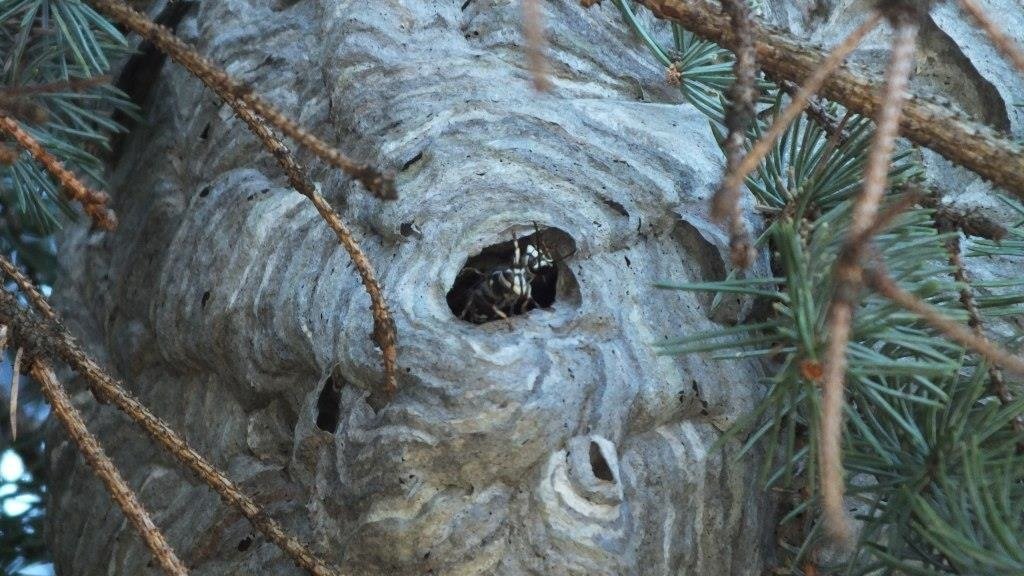 The nest is essentially a well-fortified, fully staffed nursery. The architecture includes three levels of hexagonal incubation chambers suspended from the ceiling. It has an air vent at the top, a guarded entrance near the bottom, and many layers of insulation laid down in a shingle-like pattern to allow for water run-off. It is strong enough to withstand storms and the occasional raid by red-eyed vireos, small birds that use wasp paper to trim their nests.

Over the summer, the colony preys on flies, caterpillars, and other yellow jackets (a culinary favorite). They will raise female workers, male drones, and future queens. As the days shorten and temperatures drop, activity in the nest will slow to a crawl. The first heavy frost of autumn will spell the end to all but the new queens who will have already left in search of a safe place to hibernate.

I still wonder how the bald-faced hornets know how to build their nest. But while I figure it out, the colony in my tree is welcome to stay. Each day, when I get out of my car, I stop to watch the animals work. The nest entrance is always congested with two-way traffic, each wasp single-minded in her efforts to provide for the colony. I try to imagine what it would be like to be a bald-faced hornet, living and working communally inside the nest.

I hadn’t thought about it before, but it must be dark in there. How do they find their way around? How do they communicate in the dark? Do they recognize each other as individuals? Every day this wall-papered nursery presents more questions than answers. But to the wasps, I am immaterial. They don’t hate me or my kind. They will not attack me without cause. As long as I keep my distance, I am free to watch them carry on the good work of raising future queens. 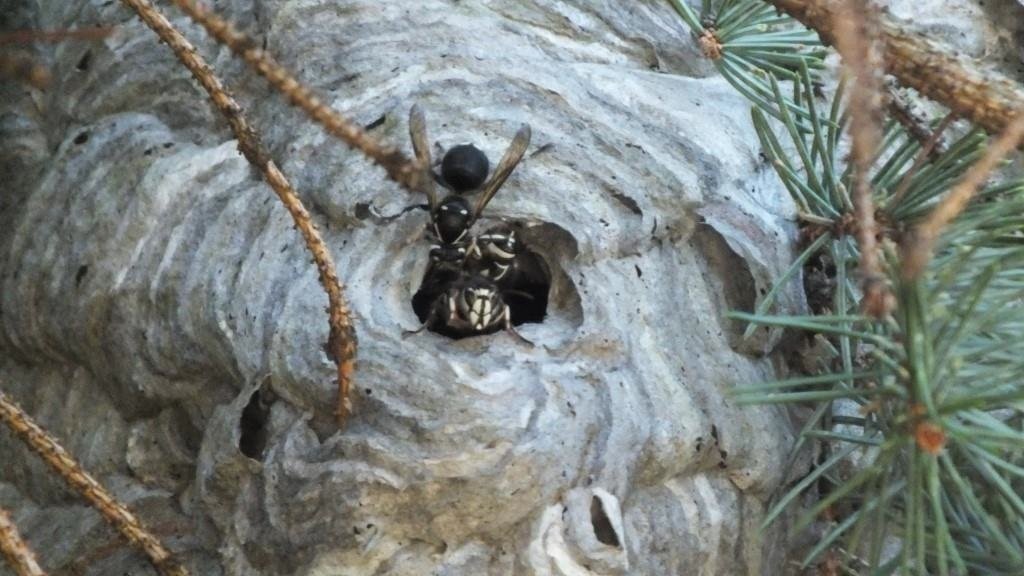