Nature Love in the Realm of Fiction 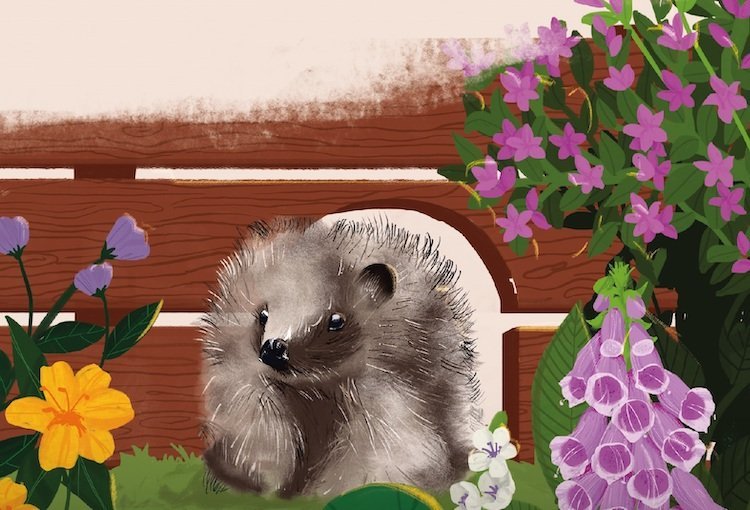 Photo Credit: section of cover art from The Gardens of Greenspring Road

Life can be funny. I almost didn’t write up my thoughts on how humans interact with urban snails, for a submission to City Creatures Blog, but I am glad I did. For one thing, ensuing comments on social media introduced me to a fascinating subculture of snail-caring, including the practice of healing individuals whose shells have been cracked but not fragmented by placing them in a large pot of damp soil. For another thing, the piece was read by a publisher, who approached me about writing a book. This I did, focusing on the nature of my tiny suburban backyard for subject matter, and it came out earlier this year.

Once locked into thinking about the importance of urban wildlife in our everyday living—and the importance of our everyday living for urban wildlife—I started wondering how the experience of this mutualism might be particularly important for children who spend most of their time in towns and cities. And I continued to write. This time, I jumped to realm of fiction, and the result was an eco-novel titled The Gardens of Greenspring Road, under my pen name Dewey Dabbar. (All of the author royalties from the book are being donated to the World Land Trust.)

The book is set in the British town of Thornlea, and its central human character is a fifteen-year-old girl of Bengali heritage named Mina Thakli. We follow her story as she awakens to the beauty, agency, and moral standing of the wildlife in and around her town, and as she commits to a clandestine nocturnal project to help one particular kind of creature (depicted on the book’s cover and the header image above).

Below, I present a short extract, which is taken from the end of the second chapter and details an experience that proves crucial in the blossoming of Mina’s love for the living world around her. It is night-time in winter, and we are in an urban orchard near the Thaklis’ home where a group, including Mina and her parents, has assembled for a wassail, under the guidance of a man named Terry Biggins.

… After these preliminary notes, Terry made an official start to proceedings and plunged into the promised verse, pausing for a couple of seconds after each line:

We come to wassail thee,

And a little heap under the stairs.

Revelling in the ceremony, Terry now began to bow to the trees that surrounded him. He did this four times in all, turning through a right angle after each act of obeisance. Then, once back at his original orientation, he unleashed the proclamation to which he had been so looking forward: “Waes hail!”

This time the cries of response came in a piercing unison.

“Excellent,” exclaimed Terry with giddy pride. “And now, if you’d care to follow me, we will go and make as much noise as we can to ward off those pesky spirits!”

As promised, Terry had found the Thaklis after the scaring-away of evil, as they each drank from a cup of the mulled beverage, and he was enjoying an audience comprising three pairs of ears that he had not previously bent.

“I know it sounds silly,” he said, “but I feel as if the trees are winning my friendship through the cider. It’s like they’re talking to me. At least I feel more inclined to do right by them after a couple of bottles of the special reserve!”

“I must admit that I haven’t touched the stuff since my days with the football club at university,” said Pranab, attracting a reproachful stare from Mishti. She did not like Mina to hear too much of her father’s former exploits. “But this mulled cider,” he continued unabashedly, “is rather drinkable.”

“The recipe is Trisha’s, my wife,” said Terry, “although I was a willing guinea pig as she perfected it!”

These men are as bad as each other, thought Mishti. She was still a little peeved that her husband had thrust a cup of the warm liquid into Mina’s hand without any hint of a consultation on the matter.

“Well, we can’t let her hands get cold, can we?” Pranab had said, sensing Mishti’s displeasure. But his act had not been motivated by a desire to help his daughter to keep warm. Instead, it was to thank her for having handed him her spoon and pan half-way round the circuit of the orchard, without any beckoning, so that he could join in the festivities. What a remarkable girl, he had thought. I swear she can read minds.

“Anyway, the alcohol will have burned off,” he had added, in order to bolster his defence.

The alcohol had not, in fact, all evaporated—not with the starting level in this particular recipe. And Mina was beginning to feel tipsy as she took a final gulp from her cup. She’d been drunk once before, at a sleepover at her friend Suzie’s house, but the feeling that was beginning to crest in her now was altogether more potent. It was not that she was losing control; rather, she was experiencing a most delightful invigoration of her spirits.

“Right,” said Terry to the Thaklis, “I think it’s time we give a little back to the trees.”

And so the family completed a second lap of the orchard, with Mina, under the watchful eye of the Chair, stopping at each tree to pour a drop of cider from a newly filled cup onto the roots. By the time the family had returned to the twelve lit candles and the now-dwindling group, Mishti, who had gained much pleasure from seeing her daughter leading the ceremony’s closing stage, had privately made peace with her husband.

“I sometimes wonder what the trees are thinking,” reflected Terry as he and the Thaklis approached Trisha. “Maybe they are looking at us and saying, ‘What a strange lot. They chop down and tarmac over our friends in Greenspring Wood. Yet here they are bowing to us.’”

“Let me guess,” said Trisha, who was now within earshot. “He’s telling you about how the trees talk to him!”

“Well, yes, as a matter of fact he is,” said Pranab, who had quickly warmed to his ruddy-faced companion. “And I must say that I find it fascinating. Especially that thing you said, Terry, about how the trees in the orchard are communicating with the trees in the woodland, through their roots.”

“Mina,” said Trisha, redirecting her conversational effort but without any intention to shift from the overarching theme of gently ribbing her husband. “You’re very fortunate that he—Terry, I mean—let you do the cider pouring. He’s very particular about the way things are done, and I know this wassailing is his latest thing.”

“I don’t deny that,” said Terry half-distractedly, as if caught by some other thought.

“But I think he made a great choice,” said Trisha. “Anyone can see that you’re a real bright spark, young Mina. And so pretty too with that ponytail. How old are you, if you don’t mind my asking?”

“I’m fifteen,” Mina responded coolly, fighting to mask her embarrassment at the compliment.

“Those are very kind words, Trisha,” said Mishti, “and thank you again to everyone for putting on such a lovely event. Even my husband got into the spirit of things. But you must need some time to tidy up, and we really should get going…”

With farewells completed, the Thaklis began to retrace the steps of their short journey to the event. As they walked past the last of the apple trees, Mina spotted a pair of foxes slinking along the outside edge of the orchard, on the other side of the chain-link fence. They seemed to her to be looking for a gap through which to enter.

“Do you think we should ask Mr. Biggins if he could cut a hole in the fence for foxes to pass through?”

“I don’t think they’d want that, Mina,” said Mishti. “Foxes are pests, and they’re not going to like them running around in there.”

“What makes you so keen on nature all of a sudden, Mina?” asked Pranab. “I can’t recall you previously having an interest in wild animals.”

“I don’t know,” said Mina. “It was just the way the foxes were looking at me, I guess.”

As she said this, the trembling hu-hwooooo of an owl arrived on the air from the direction of Greenspring Wood and Mina turned her head with a new curiosity about her surroundings.