The Nature of Violence 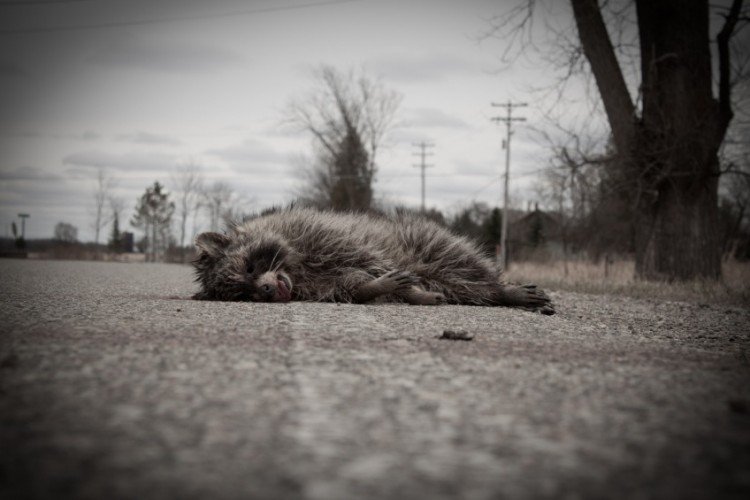 Late one winter night, on a nearby side road, my headlights caught a furry animal with large triangular ears and a long tail crawling on top of some other animal. The blacktop was dark and silent, so I threw the car in reverse and whirred backward until I could train my lights on the bloody pointed mouth of a possum feeding on fresh roadkill—a raccoon.

A mid-February cold snap had ended abruptly. In the past twenty-four hours the temperature had climbed from 11 to 46 degrees. Possums and raccoons don’t hibernate; they are “winter sleepers”—meaning that after holing up in some tree trunk during the recent bitter weather, these animals were lured from lethargy by the heat wave, and their stomachs.

Perhaps I’m a voyeur, parking six feet away from the possum—with my lights still on and my window down. Ravenously hungry, he ignored me. He peeled three long strips of fur back over the raccoon’s rib cage like he was shucking an ear of corn, then plunged his face into the opening, under the roof of bones and into the steaming organs. The immense sparkling bowl of the night sky seemed to magnify rather than absorb the sound of the tearing flesh, and the possum’s eerie breathing. Then he clamped on to the stomach, and began backing up until the gut snapped. When it did he was almost under the car. I could have reached down and touched him. I stuck my head out the window for a better look and he whirled, gave a ceremonious hiss, and showed me his teeth—about fifty, short and jagged. Then he went right back to work.  Clearly, I was an inconvenience, not a threat.

After he had chomped through the aorta I was startled by how easily I recognized the raccoon’s heart. The possum snatched out the dripping lump of muscle and crunched it up like a large apricot that had not yet ripened into softness, into its sweet summer tang. At that moment the beam of light on the bloody mangle made me feel like I was watching a scene from a war rather than the cycle of creation. It seemed an act of appalling violence. But in providing for itself and thus its offspring, the possum was also maintaining the dynamic balance of things, the network of relationships that sustain the cycle of nature.

At the college where I teach, my students and I have been struggling to better understand the complex problem of violence for the past few years. In a research course, we first read an essay by philosopher John Modschiedler called “Understanding Violence.” Relying heavily on etymology, he defines violence this way.

It is a ripping apart, a tearing out (of context) … the end product of not thinking of things in relationship. Violence is a scattering. Scattering is the opposite of gathered togetherness—community. Violence is an assault on community, on belongingness, on relationship…

We spend the rest of the semester reading books and articles that apply this idea to the violence in our lives—to how domestic violence and racism and poverty and militarism and the war on the environment all rip apart the dream of “gathered togetherness,” of real community.

That winter night, however, my only text was the natural world. And the damp muddy story of that late winter thaw told me that the possum’s heart-ripping meal was not an act of violence, but its antithesis. As is the coyote who pounces on a cottontail that wanders too far from its burrow. As are the robins who will soon return to start wildly yanking worms from the mud. Prey and predator both belong because they live and die in an intricate cycle of relationship. 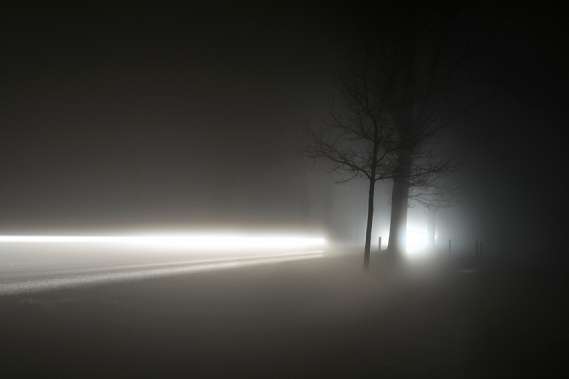 But consider the relationship between the human and the rest of the natural world. The human drives the car that kills the raccoon that “got in its way.” He leaves it there–doesn’t skin it or eat it or even pull the carcass off the asphalt to rot in the ditch. The possum compensates. So did a couple of starlings the next day, when they raucously pecked out the raccoon’s eyes, the only soft tissue they could find. At dusk a cat wandered by and drug the raccoon off the road and into the ditch by the matted stump of its tail. But then it lost interest. Two days later it warmed up to 70 degrees and a platoon of ants joined the beetles and mites and bacteria that had begun to eat and digest the carcass back into the earth. This is not violence, but the stewardship of hunger.

The animal most adept at disrupting this fragile network of relationships lives less by instinct than reason. Intensely self-conscious, and with unparalleled intellect and language skills, only humans can conceive of their “role” in nature, a role we increasingly view as involving material opportunity rather than moral responsibility. Being human is less about belonging to creation than controlling it. And this ignorance is the source of much violence to our own species and the whole of the biosphere.

In seminary I was taught that religion could help reduce or resolve the problem of human violence. The Latin root of the word means “to bind together,” which implies a social ethic, and thus a remedy to the core disrelation and “ripping apart.” But while many religious leaders and communities have modeled alternatives to violence, much violent behavior, including most wars, has been catalyzed and/or validated by religion. Perhaps the problem is the alternative meaning of “to bind.” To bind also means to enslave. “Religious” Euro-Americans enslaved Africans and sold them at auctions like cattle. The U.S. government limited the human species to the light-skinned, defining a “Negro” as 3/5 of a human being. And our military killed hundreds of thousands of Native Americans (“savages”) in the quest for more land.

This tradition of “the enemy as animal,” and thus expendable, continues. In the sixties, the North Vietnamese, when not referred to as gooks or dinks, were called “Indians” by the U.S. military. In the nineties, U.S. air pilots called the bombing of retreating Iraqis “a turkey shoot.” Violence against those defined as sub-human has been historically legitimized and widely accepted in this country.

This mindset is consistent with our attitude toward the billions of nonhuman creatures with which we share the earth—the bullfrogs and salmon, the oak trees and meadowlarks. The war on the environment is also fierce. We continue to “rip apart” non-human communities and cultures, to assault the “gathered togetherness” of the earth entire. I have sometimes heard Christians use a Genesis-based argument for “man’s dominion” over creation to justify their “right” to develop (destroy), market, and sell every square foot of it. This view of the natural world as a war for domination, rather than a web of interdependency, has become governmental policy.

But there are other models.

The possum too has its wisdom.