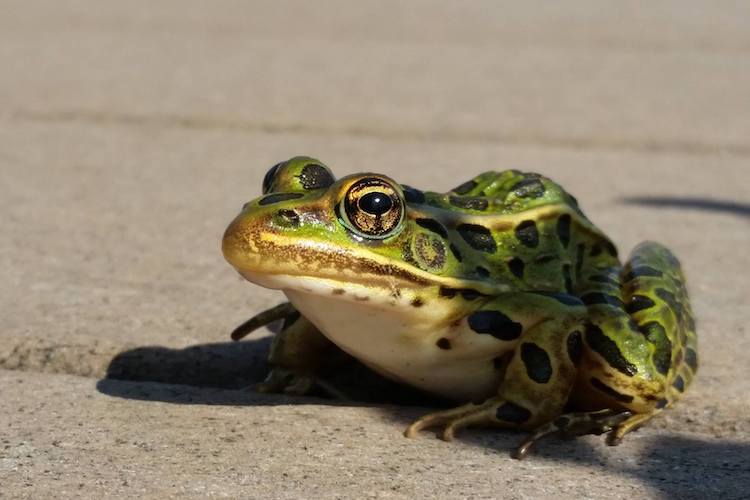 In my bicycle’s immediate trajectory was a tawny brown, pear-shaped lump. With a face. Seeing this, I panicked and blew the bucolic morning vibe. I let out a shrill gasp as I yanked hard on my brakes. Rubber gnashed gravel.

Fully stopped, I braced myself for tragedy, but still hoped the frog’s reflexes had been quick enough to spring her to safety. About forty steps away a power-walker was paused mid-stride, staring. The noise I’d made, like steam in a kettle just before it whistles, must have been loud enough to disrupt the music in her earbuds. She was watching me. From her vantage point I had barely avoided a head-on collision with the air. Ignoring her, I jumped off my bike to assess the damage…

Seconds ago, I’d been coasting along at a moderate clip, allowing thoughts to freely unfurl. Easy to do on the Illinois and Michigan (I&M) Canal Trail. The long-retired shipping route turned National Heritage Area is a 96-mile ribbon of wetland and greenery, only occasionally intersected by streets and railroads. It’s a reprieve from suburban development and a haven for wildlife.

Beneath an azure sky, the canal showed signs of early autumn. Crickets chirruped, a cautious two-point buck morphed back to shade, the mildewy cologne of fallen cottonwood leaves swelled in the air. Despite these delights, though, one detail weighed on my mind as sweat beaded on my skin. The temperature. It was approaching eighty degrees.

Growing up in the Chicago metropolitan area, I remember September as the month that transitioned us to sweater weather. Sure, there were some hotter days. Labor Day weekend was our adieu to the summer before rec clubs closed their beaches for the season. But it seemed we’d inevitably get one relentlessly blustery, chilly day. The kind that snapped grocery receipts from hands, tangled windchimes to silence, and beckoned cooler temperatures for the months to come.

We didn’t get one of those this September. In fact, the NOAA National Centers for Environmental Information reported that Illinois ranked among the top three Midwestern states for recording both the most record maximum high and record maximum low temperatures in September 2021; two years earlier, their 2019 report stated the Midwest scored its “second warmest September on record (1895 to 2019).”

As if the “new normal” of the COVID-19 pandemic wasn’t enough, anthropogenic climate change is real as ever but no easier to accept.

I stood in the middle of the trail, beholding what I considered a miracle. Unharmed, the frog squatted motionless near my rear bike tire. “I can sleep tonight,” I breathed. Over her back and legs were spots the color of old pennies. Each one was outlined in bright pale green, like the algae floating on the canal’s surface. Two unbroken ridges ran from her head to butt. They were textbook markings of a northern leopard frog. I’m no herpetologist, but I could draw on what knowledge I had of their basic physical features and mating habits. Several years ago, during my nights as a volunteer frog monitor at Midewin National Tallgrass Prairie, I had learned to identify local species by their mating calls. In spring and summer we would meet at our assigned wetland sites, thirty minutes after sunset, preferably after a rain. That was when the calling, and magic, would happen.

I assumed I was looking at a she-frog, because this one seemed sizeable—about four inches long by my eyeball-reckoning of measurement—and a comparatively larger size is a more feminine attribute for northern leopard frogs. She appeared unfazed by the fact that she was just nearly run over by a Ferris wheel from her point of view—two Ferris wheels, actually. Maybe she was stunned. Or selling herself as a dead cottonwood leaf. Or maybe she was thinking, “Screw it, the world’s ending anyway.” I felt like I’d just performed the stunt of my life, and her response was as blasé as Simon Cowell at hour twelve of America’s Got Talent auditions. It was beyond me.

As the world’s most famous felt frog once sang, it’s not easy being green. Anuran populations suffer having their habitats bulldozed and filled, their nursery waters poisoned. Even in safer situations like on the I&M, there’s the ever-present danger of being eaten by a predator, or the hapless event of getting squashed by an ignorant cyclist. It’s concerning now, too, that summer and fall routinely arm wrestle, and March drops by for the hell of it in January. Time will tell how climate change effects their lives. What do erratic winter temperatures mean for mating behavior, for eggs and tadpoles? Will rare places like this 96-mile ribbon be enough to support them in the decades to come?

So much uncertainty. Yet, before me sat the perfect example of what it means to stay present in the face of uncertainty. She held deftly quiet and still. And in her presence, I felt granted permission to let go. Of the unknown, of disappointment, even of hope. It was like riding my bike with no handlebars and totally nailing it. Letting go allowed me to be fully in the moment.

One elongated minute passed until the frog decided to move. Two hops and—vanished—behind a curtain of dry grass. Her life would carry on that day. I crouched there on the trail, feeling utterly human with my three-pound brain and my smart phone and my belief in an intelligent Universe. An amphibian had just schooled me Eckhart Tolle style. I needed a moment.

Warm light shrunk the shadows. An insect buzzed staccato. The power-walker had long since stridden away. It was my turn to move along, too.

“About This Place,” I & M Canal National Heritage Area, https://iandmcanal.org/about-us/.