Out my window, an Eastern Black Swallowtail Butterfly, velvet wings striped with brilliant gold, flutters around a Rocky Mountain Beeplant, probing each pink blossom for nectar. Nearby, a male Lesser Goldfinch, its plumage a similar black-and-gold color scheme, pries tightly packed, fat-rich seeds out of the flower head of a native sunflower, pausing between mouthfuls to call in its sweet, chiming voice.

The patch of mountain prairie that now draws swallowtails and goldfinches was, until recently, a vacant lot infested with invasive weeds and studded with chunks of waste concrete, rusting engine blocks and other industrial detritus, the last un-reclaimed piece of a junky industrial property in a wrong-side-of-the-railroad-tracks neighborhood that my late husband and I fell in love with and adopted nearly twenty years ago. 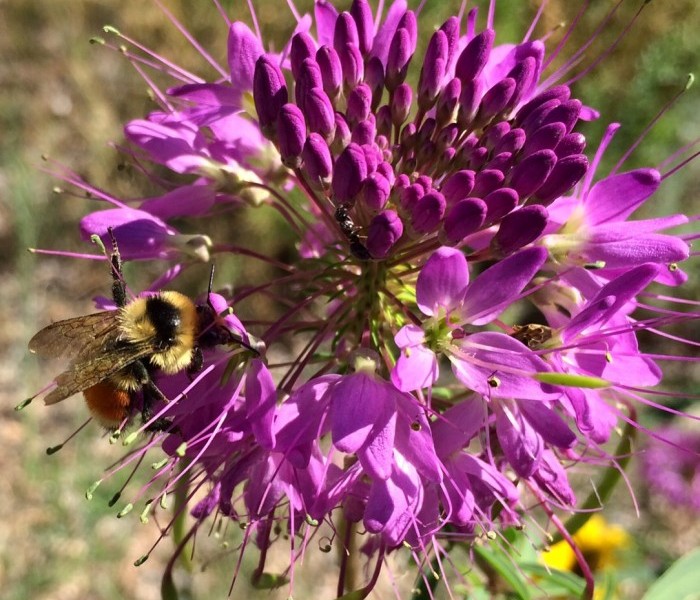 Back then, no swallowtails fluttered past and no goldfinch songs sweetened the morning air. The place held nothing for them. They reappeared only after we cleared the invasive weeds and experimented with restoring a wildflower-freckled indigenous mountain prairie. As the plants sprouted, they called in the rest of that living ecosystem, including Black-Chinned, Calliope, Rufous, and Broad-Tailed Hummingbirds; Hunt’s Bumblebees and over two dozen other species of native bees, Sphinx Moths and Checkerspot, Monarch, and Fritillary Butterflies; Mountain Bluebirds, Black-Capped Chickadees and Tree Swallows; Western Terrestrial Garter Snakes, mayflies and dragonflies; Stink Beetles, Sunflower Beetles, and Harvester Ants; Least Chipmunks and Mule Deer—high desert natives all.

When I think of the question of how far we should go to restore extinct species, this former industrial property and our accidental restoration project come to mind along with the English poet John Donne’s words, “No man is an island / Entire of itself / Every man is a piece of the continent / A part of the main…” Donne’s words apply not just to we humans. The truth is, no species is an island. Every one is part of a larger community, interwoven into a web of relationships critical to the whole—eaters and eaten, pollinators and pollinated, shelterers and those sheltered.

Consider the Banded-Wing Grasshopper: their populations explode each spring on my little prairie and threaten to munch the plants to bare soil just as the Mountain Bluebirds fledge nests of voracious young whose gaping mouths the parent birds fill with high-protein grasshoppers until every big-jawed hopper is eaten. Or ponder the Sacred Datura that open their ivory, nectar-sweetened flowers at night when the adult White-Lined Sphinx Moths hover the cooling air in search of sweet calories for fuel. And  reflect on the Chokecherries that ripen just when Black Bears begin carbo-loading before winter hibernation. 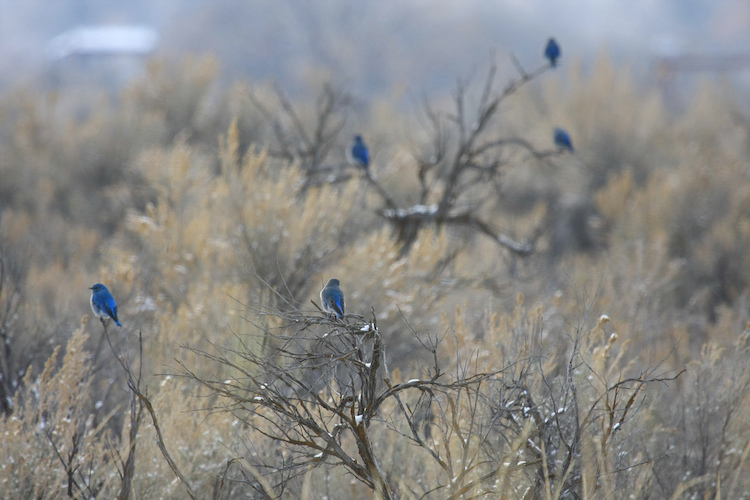 Thousands of such relationships define any creature’s life; they are the living web on which successful ecological restoration grows. When I read about research that brings us closer to being able to clone DNA extracted from ancient bone marrow or other sources and resurrect long-vanished species, what comes to mind is not, “Hot Damn! We can bring back large charismatic creatures like mammoths and Dire Wolves!”

Instead I think, “What would they eat?” “Who would they run with?” “Where would they live?” “How would they navigate an altered world?” Take forest-dwelling American Mastodons: We guess from the shape of their cuspids that they were browsers. But we don’t know which plants they munched on. Without understanding their diet, how could we keep six-ton-size mastodons healthy, much less set them to roaming the continent?

While restoring those Pleistocene mega-fauna—the mastodons, mammoths, Dire Wolves and other big creatures who grab our imaginations—may allure us, the world is no longer the one they knew. Their habitat is gone, as is the web of other species that they interacted with, the relationships that gave them food, nourishment, and even company. How would they survive without those familiar connections and communities?

Imagine their bewilderment and loneliness, born to live where they no longer belong, condemned to exist as tokens of a vanished time. Just because we can clone DNA and recreate a species does not mean we should restore its individuals if they will only survive as metaphorical islands without their companion species—including the microbes that would have decayed their bodies after death.

Unless we can return extinct species to a community they recognize, it seems to me it is wrong and selfish—or perhaps merely egotistical—to bring them back. On the other hand, if these species’ habitat and companions still exist, restoration may be worth a try.

Take, for example, the Xerces Blue butterfly, last seen in 1943 before the US Army buried its sand-dune habitat beneath wartime development at the Presidio in San Francisco. The Yellow Tree Lupine and Deerweed that Xerces Blues’ lives cycled around then still thrive today on butterfly-sized areas of dune habitat dotting the San Francisco Peninsula. If we could bring the Xerces Blue back, it would have a home and food to return to—a “continent” to which it could connect.

Or consider the Tasmanian “wolf,” a dog-like marsupial endemic to Australia, parts of New Guinea and Tasmania. Researchers speculate that the predators, who carried their young in a marsupial pouch, may have hunted in family groups, ambushing smallish prey like possums, bandicoots and potoroos. Both their presumed habitat—dry woodlands and Eucalyptus forest—and their prey are still abundant, making them also reasonable candidates for restoration.

It seems to me that we have a moral obligation to extinct species, one that involves making sure they have what they need to live well in the wild before we attempt restoration. It would be wrong or even cruel to bring these species back to exist simply as curiosities, strangers on an island where nothing is familiar, where no community feels like home.

“Mountain Bluebirds” by Seabamirum. (CC BY 2.0)