Nowhere to Go; Nothing to Do 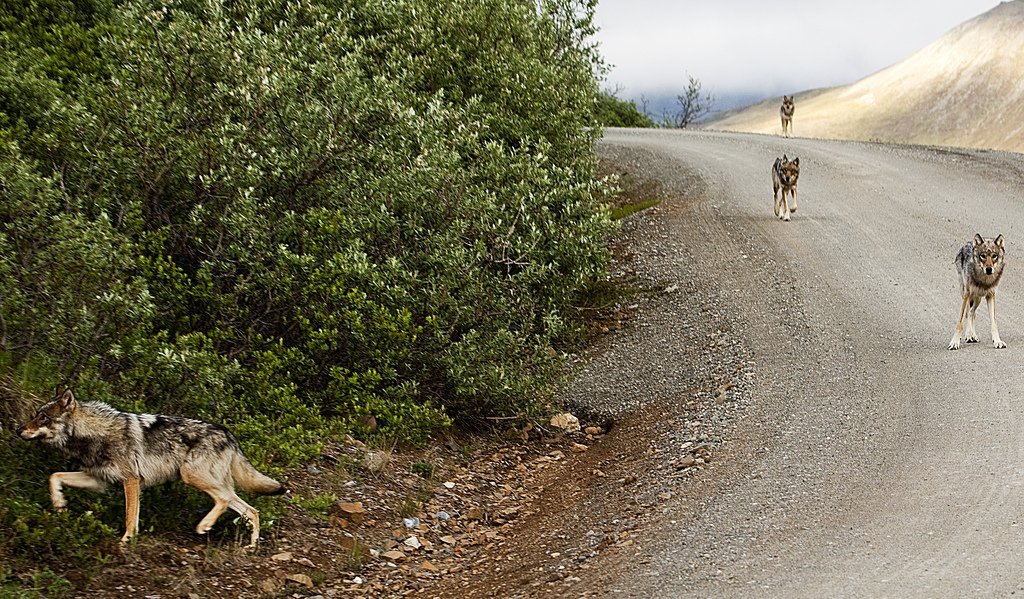 The following story is based on true events in the lives of several different gorillas.[1]

Imagine: You are a three-hundred-and-fifty-pound adult male gorilla, waking from a recurring nightmare. Your mother is shot, and as she collapses, you are torn away from her warm body, tied up and taken far away, to a small, cold, dark cell, where you grow up, alone, heartbroken and bored. You dread the nights because of your dreams and the days because of the endless stream of matricidal bipedal apes who threaten you with their stares.

One day, they move you to a much larger prison with some outdoor space with grass and trees. You learn to enjoy the feel of the sun and a taste of fresh green. This is better than the tiny cell – why, you can even hide from the relentless stares.

Still, there is nowhere to go and nothing to do.

Then a young female gorilla comes to live with you. Later, she gives birth to a baby, and your instinct to protect your child comes alive. Finally you have something—someone—to live for.

But soon afterwards, a human child falls into your enclosure. You approach him and sit close by, gently but implacably protective. Moments later a bipedal ape shoots you dead, just like they shot your mother.

The Problem: Life in Captivity

I had not intended to begin this piece with a gorilla story, but last night, the seventeen-year-old male gorilla, Harambe, was shot dead after he made contact with a child who wandered into his habitat.[2] However, I do not want to focus on this situation. My goal instead is to use these incidents and the other real events described above to help readers understand what captivity is like for gorillas and many other zoo animals.

Contentment in the Wild

I possess a heightened awareness of what captive animals lack because, as a field researcher in animal behavior, I spent years finding out how their wild counterparts live. I came to know wild Baboons, Chimpanzees, and Bottlenose Dolphins.[3] I spent ten days with Diane Fossey and the Mountain Gorillas she studied. One of those gorillas hugged me.

These and other wild animals taught me truths that everyone concerned with captive animals should know.

First, animals move, every day, often far. African Elephants average seven miles per day, Spotted Hyenas twenty-four miles.[4] Typical Polar Bear zoo enclosures are one-millionth the species minimum home range, and zoo organizations’ recommendations for outdoor elephant enclosures are 60-100 times smaller than elephants’ smallest home ranges.[5] Many species, including all who have large home ranges, should never be held captive, unless for some reason they cannot survive in the wild (because, for example, they are injured).

Second, wild animals are content. Although they suffer fear, pain, illness, and loss, as for all living beings, these events are usually transitory. Much of the time, animals are in the flow, completely absorbed in making a living. Most of us know what flow feels like; few experiences in life are more rewarding.

Being Happy Doing What You Are Made to Do

To understand animal joy, consider wolves. They patrol home ranges as large as 2,450 square miles and travel up to thirty miles a day in search of prey.[6] Then they run their prey to exhaustion to get dinner.

No mammal works harder. Yet observe a pack of wolves rallying to head out to hunt.[7] Their exuberance is hard to match (although we can witness similar displays when we say the word “walk” to our dogs). Wolves do a lot of the same things day after day, yet they still love going to work. Evolution has designed such enthusiasm into their brains and bodies. Lazy, decadent wolves don’t survive and don’t pass on their genes.

Yet even creatures with gentler lives have ecstatic moments. One morning my troop of one hundred and fifty Baboons stumbled upon an endless field of young mushrooms. Eager as they were to gorge on these delicacies, before eating they paused to hug their neighbors and join a troop-wide chorus that said, as plain as day, “Wow! Look what we found!” Wild gorillas love their lives, too; if you need to be convinced, watch this short video.[8]

Captive animals typically lack opportunities for extended absorption in species-relevant activities. The opposite of flow is boredom. Boredom, day after day, month after month, leads to despair. The reality is that below the surface, captive animals are nothing like their focused, energized and content wild counterparts. 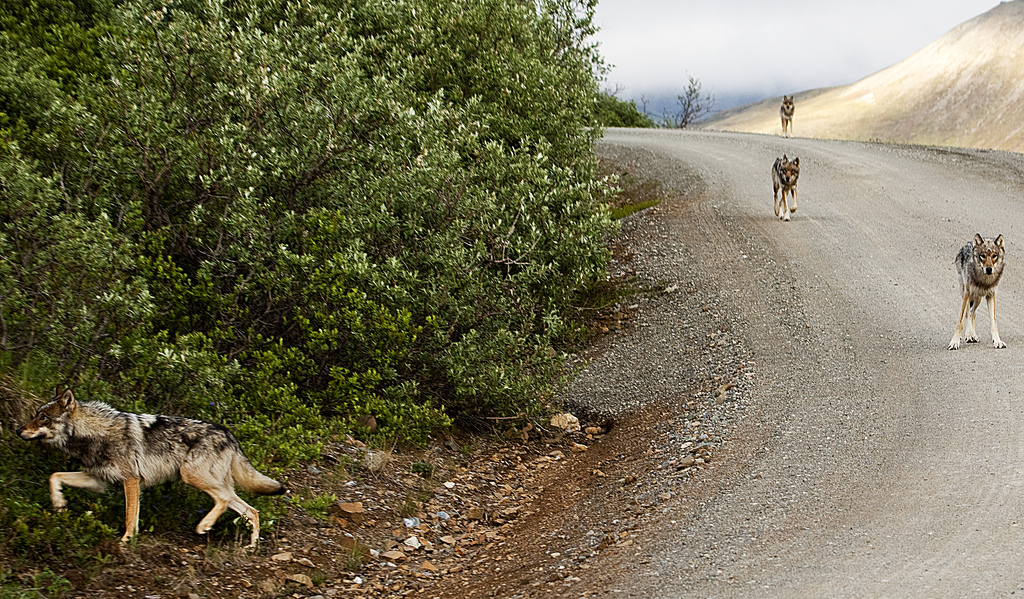 Zoos, in general, are set in their ways and appear little inclined toward the radical changes necessary for animals to be content. Captive animals’ lives can be vastly improved by focusing on three goals: Providing places to go and, things to do, and more or better companions for animals to do things with.

I want to give a few examples, as illustrations of the kinds of changes that are both possible and urgently needed, beginning with companionship.

Novel companions: dogs. Although captive animals often are, and usually should be, housed with other members of their species, sometimes no conspecifics are available, or they die or friends/family are taken away for breeding, or animals simply don’t get along with the partner(s) provided to them.

To alleviate loneliness and despair, animals can be raised with (or introduced to) domestic dogs. When it comes to friendship, dogs are promiscuous: seemingly any species will do, including cheetahs, orangutans, and elephants; the list goes on and on.[9] Reciprocally, individuals of many species seem to like dogs as much as we do. With tens of thousands of lonely captive animals and millions of stray dogs at risk of being euthanized, placing them together seems like a no-brainer.

Novel companions: beyond dogs. More and more instances of “unlikely” friendships among captive animals are coming to light. They include unlikely relationships such as coyote/lion and hippo/tortoise. It should be possible to find the right companions for almost any lonely animal.

Many zoo authorities will object that such mixed-species companionship is “unnatural.” Because zoos are completely unnatural, this is a lame objection, but even if taken seriously, it’s not true. For example, the Baboons I studied spent many hours with Impala, Thompson’s Gazelles, Bat-eared Foxes, and Warthogs, all of whom responded to each other’s alarm calls. I observed a wild Baboon playing with a juvenile Zebra and a juvenile Spotted Hyena soliciting play from Baboons. Such encounters must be common; we simply aren’t aware of them because we’re hardly ever present to witness them.

Zoos could perform experiments to find out which “unlikely” friendships might form: place individuals together with barriers between them, see what happens, and if all goes well, gradually work toward increasing contact. And if the mixed-species groups involve animals that would never meet in the wild—so what? What is more important: an illusory verisimilitude or an active, happy social life?

Places to go. The resource captive facilities most lack (besides, perhaps, human imagination) is space, and so animals are stuck with enclosures that are way too small to allow them to move as they prefer. Furthermore, the enclosures hardly change over time, so even if they provide a relatively large area compared to the size of the animals, they are bound to lack interest.

David Lulka has a cool idea: link all of a zoo’s habitats and periodically (e.g., once a month) move the animals from one to another.[10] Having recently visited my local zoo, I can testify that the habitats are very similar, so that with few modifications, different species could safely move through these different spaces. Even without enriching the spaces themselves, this could make a big difference to the animals. 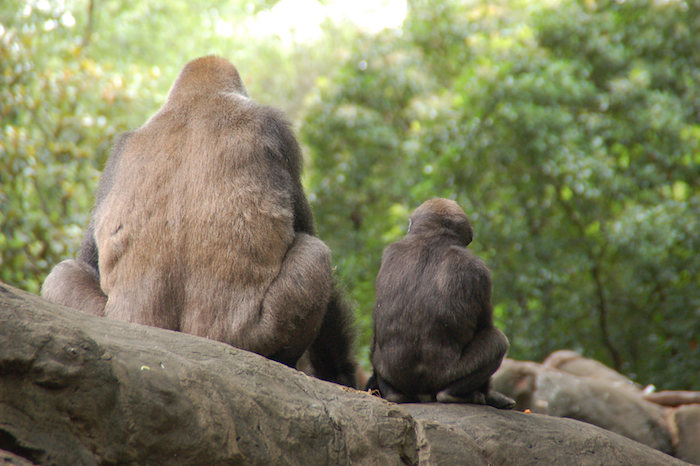 Things to do. Captive habitats are static, the exact opposite of wild spaces. This presents a real dilemma, and much creative thinking will be required to solve it. Here is just one idea that might or might not work, but maybe it’s worth a try.

Groups of school children are always visiting zoos to be educated. Maybe they could educate the adults who run the zoo about ways to invigorate habitats. Bring in zoologists to teach children about particular animals in the wild, and then release the children into the animal habitats (after removing the animals). Offer the kids both real and virtual materials, substrates and objects and let them dig, climb, swim, hide, invent games and just generally play and brainstorm about what animals might like. Through an iterative process of children designing fun habitats and animals indicating what works, changes could be implemented, regardless of how goofy or “unnatural” those changes are; the sky’s the limit when it comes to animal happiness.

I can hear the objections that such “unnatural” approaches violate zoos’ fundamental goals: to present animals as realistically as possible to increase public understanding in order to help people care about the plight of endangered species. However, bored animals make for bored people. I hypothesize that nothing will arouse interest in animals more than viewing them enthusiastically doing interesting things in ways that demonstrate the varied emotions, intelligence, and creativity that many humans think they lack.

Readers will, I hope, come up with other ideas for providing captive animals places to go, things to do, and companions to do things with. We human animals possess the capacity for imagination and empathy, which are the essential tools we need to enact and inhabit mutually beneficial interspecies landscapes, both within and beyond zoos.

[5] Clubb, R. & Mason, G. (2002). A review of the welfare of zoo elephants in Europe: A report commissioned by the RSPCA. Oxford: Animal Behaviour Research Group, Department of Zoology, University of Oxford, as cited by Lulka, D. (2010). Boring a wormhole in the zoological park. In R. R. Acampora (Ed.) Metamorphoses of the Zoo: Animal Encounter after Noah (pp.123-149). Lanham, MD: Lexington Books.