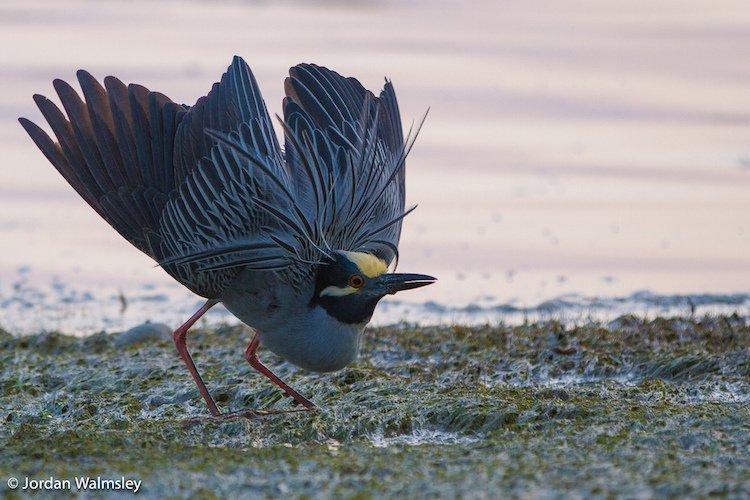 A neighbor finds one of the yellow-crowned night herons tangled like a hanger in the street, alive over broken legs and a broken wing. She’s the size of a crow, just a fledging, spotted like a fawn, but with the strange red eyes of her kind. He knows what she is—a once-endangered heron that has made a surprising comeback in the century-old sycamores of midtown Harrisburg, Pennsylvania. He tucks her against the tree and calls a wildlife rescue. Survival will be slim, but they will take her. The neighbor gets a box and a blanket and heads out to save the night heron in the night—it’s almost 11 pm. As he bends to scoop the bird, he gets a gun to his head. Two men mug him for his iPhone.

The muggers flee and the neighbor, trembling, takes a trembling bird into his house. He posts on social media that he too was terrified that he was going to die on the curb. I imagine a moment when he and the bird locked eyes in a mutual, befuddled agreement about how the human species flies so straight to violence.

Maybe the fledging is not surprised by any of this. For decades, the yellow-crowned night herons were the target of millinery hunters who sought their yellow crown feathers to decorate ladies’ hats. It was about status, not unlike having an iPhone or a gun. 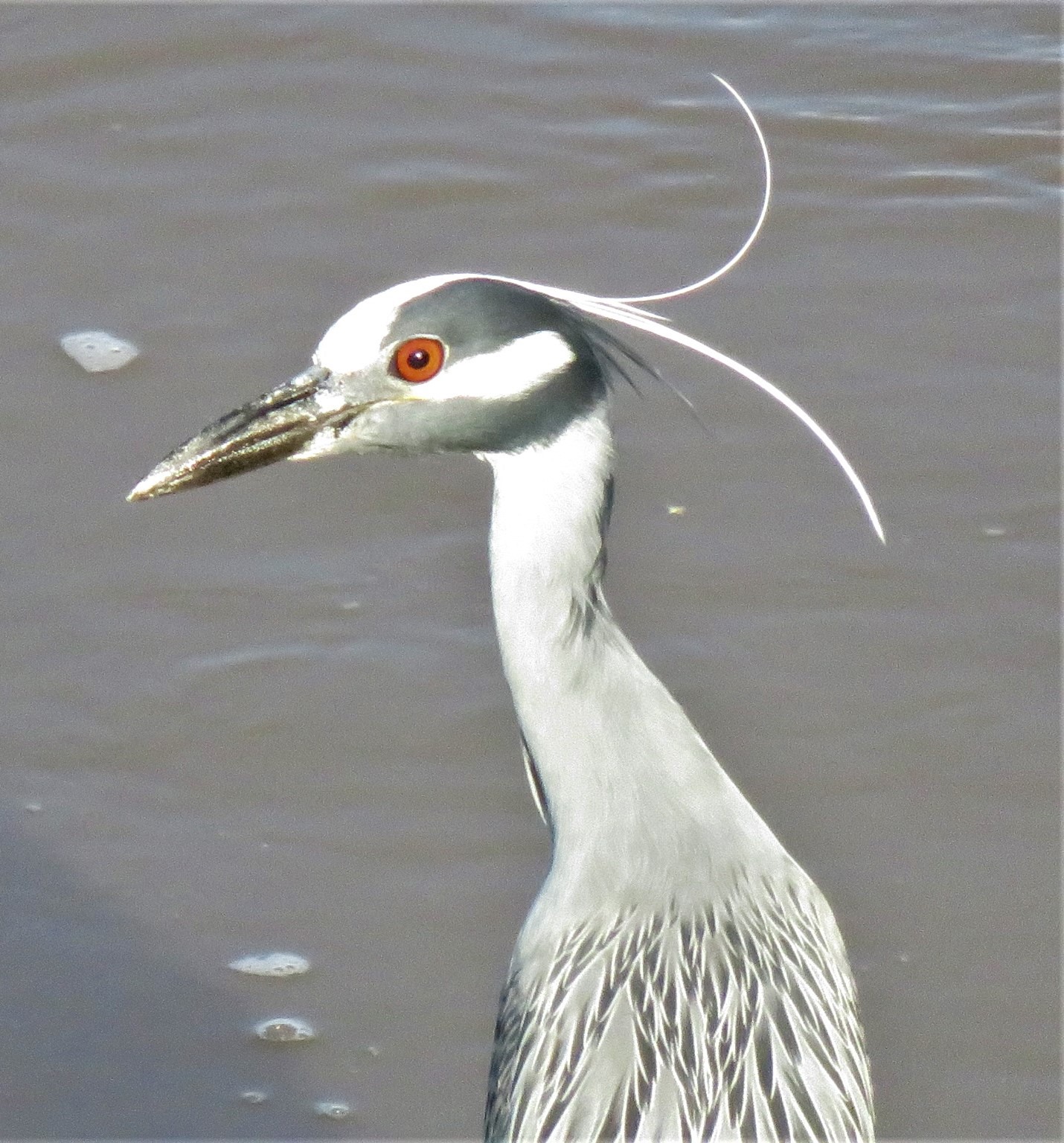 The neighbor called the police, tracked his iPhone, and the cops found the men before dawn. The neighbor got his iPhone back. The muggers got charged. The word hero is in heron.

The heron died the next day, after surgery, bones set with splints and bandages but lungs ravaged by pneumonia.

They are not really a delicate bird, their croaks and squawks like auditory remnants from a primordial wetland none of us have ever seen. When landing, they clunk through the humidity, awkward as ancient mosquitoes with vertigo. They blunder into powerlines and electrocute themselves. They drop ropes of white feces and orange turd-pellets of undigested crayfish that fester with flies on the hot asphalt. Even my dog steers clear of the filthy patches; park your car under a nest and it will be coated with rancid paste and a stench resembling a brackish low tide that has settled in a sewage spill. And their eyes are an unnerving red.

In the twenty-first century, the ancestors of the little dead heron established one of the few documented Pennsylvania nesting sites in midtown Harrisburg, where I have lived since 2007. My informal headcount in spring revealed twenty-six adults in thirteen nests spread over eight trees in a two-mile radius. If each pair laid the standard one to four eggs, the late summer census—which is tough to do because of the foliage and the height of their nests—would range from roughly forty to eighty herons. Forty herons is a lot for a few square miles in the city, and eighty would be astounding. I think about the little one that didn’t make it and hope the survivors make up for the loss. 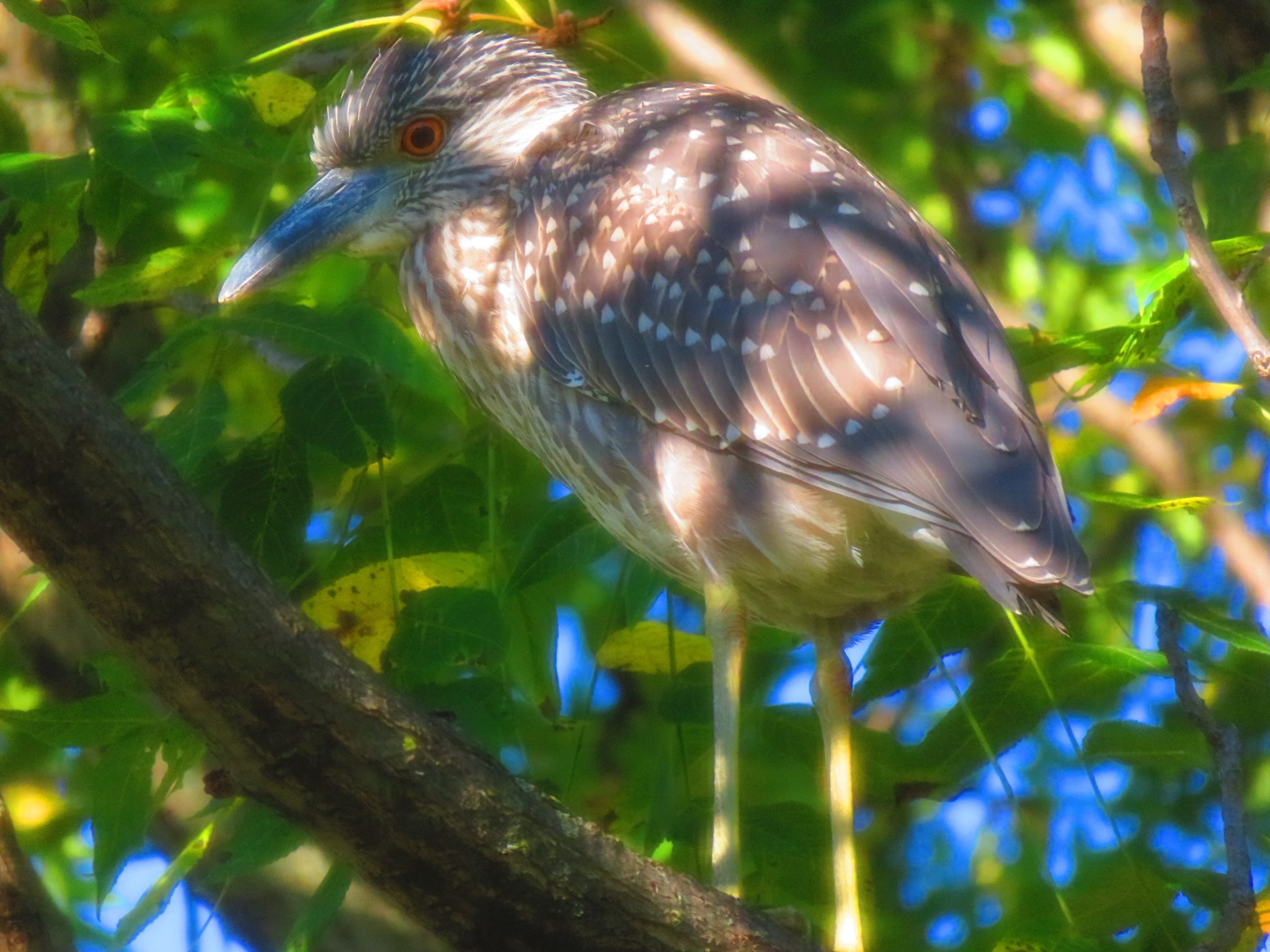 How odd that herons would lay claim to an urban rookery, especially when the long and low islands of the Susquehanna River are two blocks away, each thick and wild with maples, ashes, and oaks, no matrixes of high voltage to undo plumage. But the islands are lorded over by cold cruel egrets and the district authority, the blue heron, as well as the dark and devilish cormorants and the unforgiving wingspans of bald eagles. These birds are old dinosaurs ready to kill for territory. Rebounding and searching for their own safe branches, the yellow-crowns turned their red eyes to the inland sycamores. Turns out the traffic that sometimes crushes a fallen baby also provides protection for the birds, because one of the herons’ predators, the raccoon, is also taken down by cars and trucks.

After a decade of watching the nests each summer, I stopped seeing their strange plumage and saw something else: a pattern, a trend—beneath many nests, on the street below, had been a tragedy.

Often it was a tragedy experienced by the herons—a fallen youngster, or a whole nest stormblown and scattered to the stop signs, or a murder of crows descending to pillage the eggs. There was the mugging. Another time, at the nests furthest uptown, a rookie cop pulled out without looking and ran into a motorcycle, killing the rider. The big herons would have peered over their platform nests to watch the paramedics cease CPR, then call the time of death, then pick up the rider’s white helmet that had rolled to the curb. And worst of all, at the nests of Green Street, a despicable and troubled family let a severely disabled boy starve to death in a locked bedroom. When the cops removed his nine-year-old body, it weighed sixteen pounds, and I can only imagine it looked thin as a nightmarish bird. I imagine the herons witnessed that unfolding too.

I almost convince myself that these urban yellow-crown night herons are out for revenge, maybe even casting a hex or curse on the people below. It’s my Black Mirror or Twilight Zone narrative. I live near Pennsylvania Dutch country, famous for its mystical lore and brightly painted hex signs on barns. The folklore says that those geometric symbols were meant to keep trouble away—and many signs are adorned with another yellow bird, the “distelfink” or American goldfinch. So why wouldn’t the resurgent yellow-crowned night heron bring with her a bit of penance for the humans? When a local artist creates silk-screened tank tops of the herons, featuring a pair in a mirrored circle not unlike a barn’s hex sign, I buy one and secretly hope it will keep me safe from muggings and accidents.

Really, though, it’s just a nice tank top. I know, logically, that the mishaps near their nests are coincidence, that red eyes don’t make you any more or less powerful. Still, I have one more offering for protection, and I tell it now for the herons to hear, although I think they already know it: My maternal uncle, grandfather, and great-grandfather all have the middle name Herren, passed down the family tree from the surname of a matriarch, my great-great-grandmother, Martha Arnold Herren. In the context of a human name, it means “mister,” like the German “Herr.” But all I have ever heard is “heron.”

“Heron” crosses lots of Germanic waterways—an onomatopoetic word that mimics the squawking cry of the birds, the way whippoorwills got their name based on their song. My male “herren” ancestors were all tall, thin men with knobby knees and bird legs; I’ve never seen an image of my great-great-grandmother, but maybe she was thin and bird-boned, or maybe her nose was prominent, beakish, her eyes bright and strange. They all lived in the south, Texas and Alabama, where my yellow-crowns might land for the winter.

And it’s not just a family middle name I offer. For the men, their last name was and is Vogely, a variation on the German word for “bird,” which is “Vogel.” The “ly” suffix makes it “little bird.”

I hope this is enough, this tree of names in which I nest. I hope I am an odd enough little bird for the big odd birds around my home.

*All photographs, except the header, by Jen Hirt