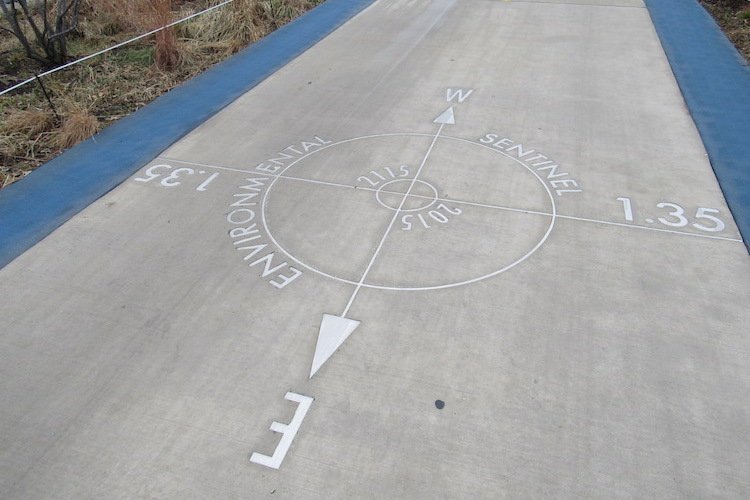 The driver fastens a white-knuckle grip on the steering wheel and aims the car my direction. Eyes locked on the road, he punches the horn with a fist. I draw a breath, waiting. He shoves the pedal down. The car accelerates…

…passing directly under my feet.

I am standing on the 606 Trail, an abandoned elevated train line recently converted into a multi-use path. Beneath me is Western Avenue, a busy urban road rife with traffic, treacherous to the city pedestrian. But I’m secure on my perch, contemplating eager drivers determined to reach the next red stoplight. I raise my head and glance west, down the trail, my own sense of urgency compelling me forward to witness everything a walk above the city has to offer. 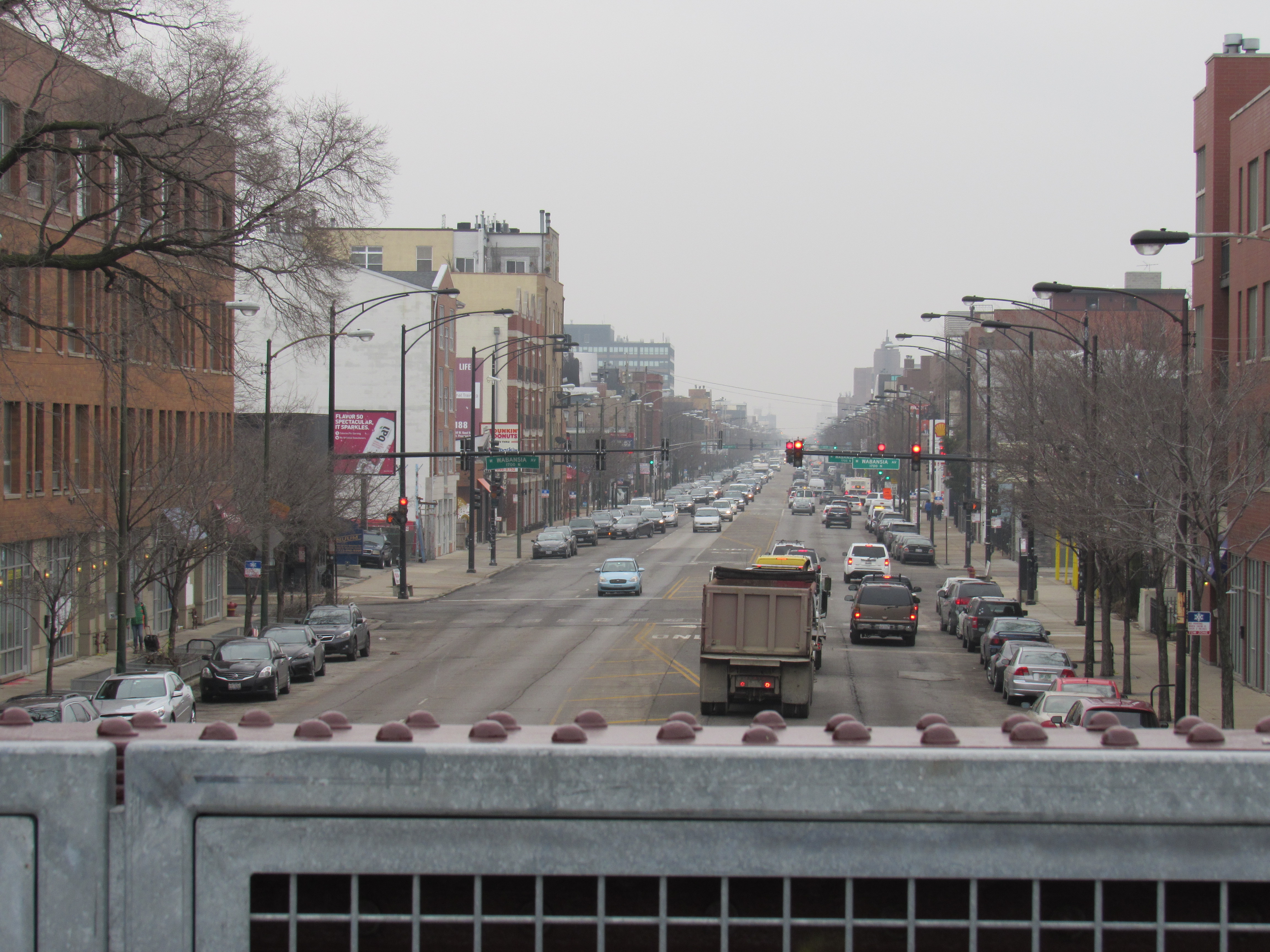 The 606 Trail, so named for the zip code prefix shared by Chicagoans, is a journey through a variety of well-planned surprises. About ten years of community meetings and public-private partnerships fed the final incarnation. Early design mock-ups and planting proposals aimed for aesthetic impact, with trail sections receiving dreamy monikers such as “Evergreen Spires,” “Blue Meadow,” “Urban Savanna,” “Echinacea Field,” and “Sumac Tunnel.” 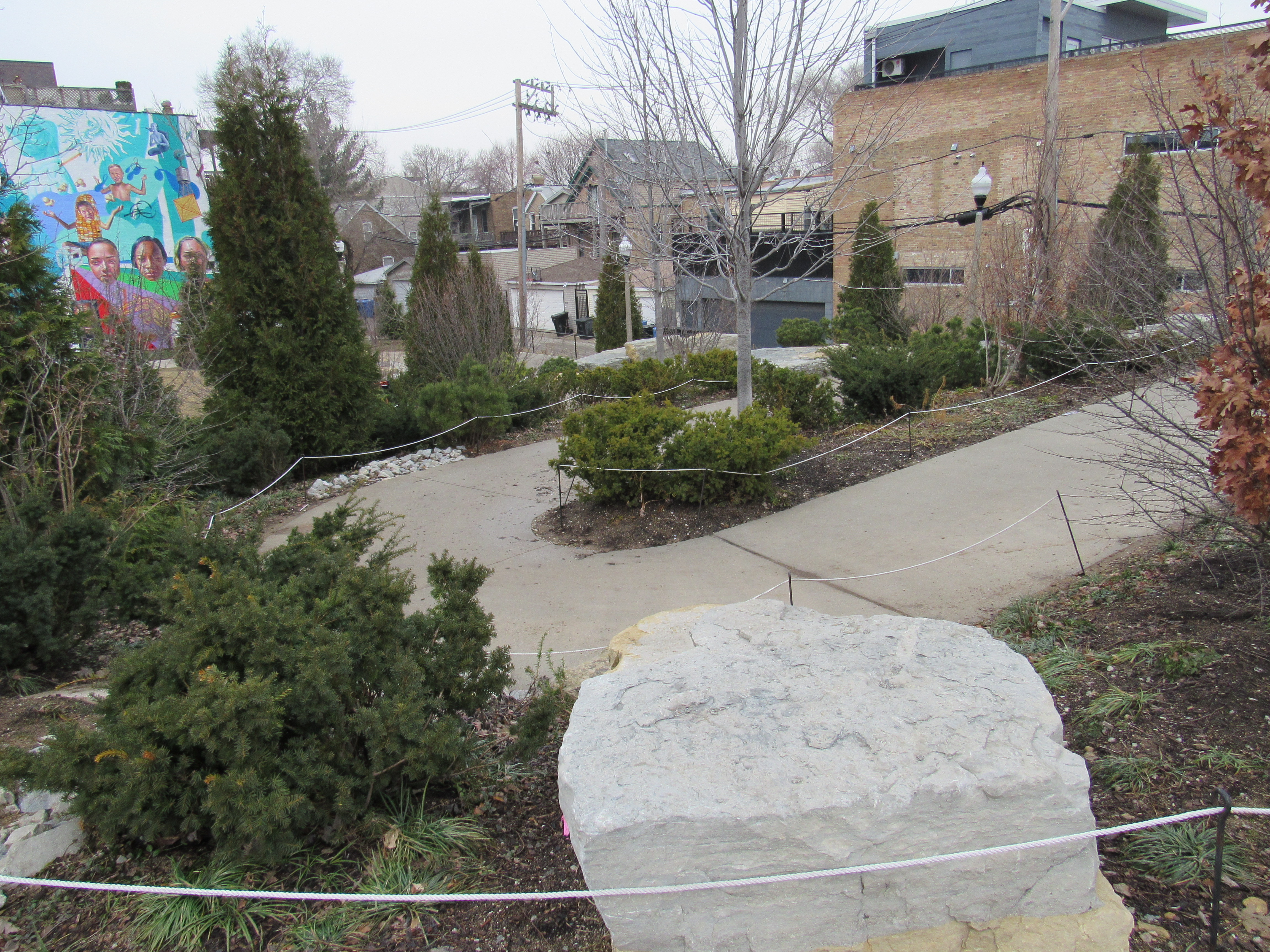 The bur oak sentinels and paper birch trees, head-high at present, will inevitably stretch their fingers, topping the curving lamps alongside the pathway. The individual tufts of prairie dropseed grass, which look like hairdos of Dr. Seuss’s Thing 1 and Thing 2, will eventually cover the bare patches of exposed ground. But already this newborn urban corridor, 2.7 miles long, sixteen feet above the ground, and an average of thirty feet in the width, presents a living palette throughout the seasons. Color, structure, and seasonality—even phenology, the timing of flower blooms—are all accounted for in the trail’s linear east-west design. A striking example is the serviceberry trees (Amelanchier grandiflora) whose ivory-pink buds are sensitive to minor temperature differences. At strategic points along the corridor, over a five-day period, the staggered timing of serviceberry blooms announces the coming spring and displays the cooling effect of Lake Michigan. One writer likens the blossoming to “lights turning on down a long hallway as the city slowly comes back to life.” The trees embody a teaching moment about the city’s interwoven habitats, a way to understand and measure shifts in microclimates by attending to beauty as it unfurls. 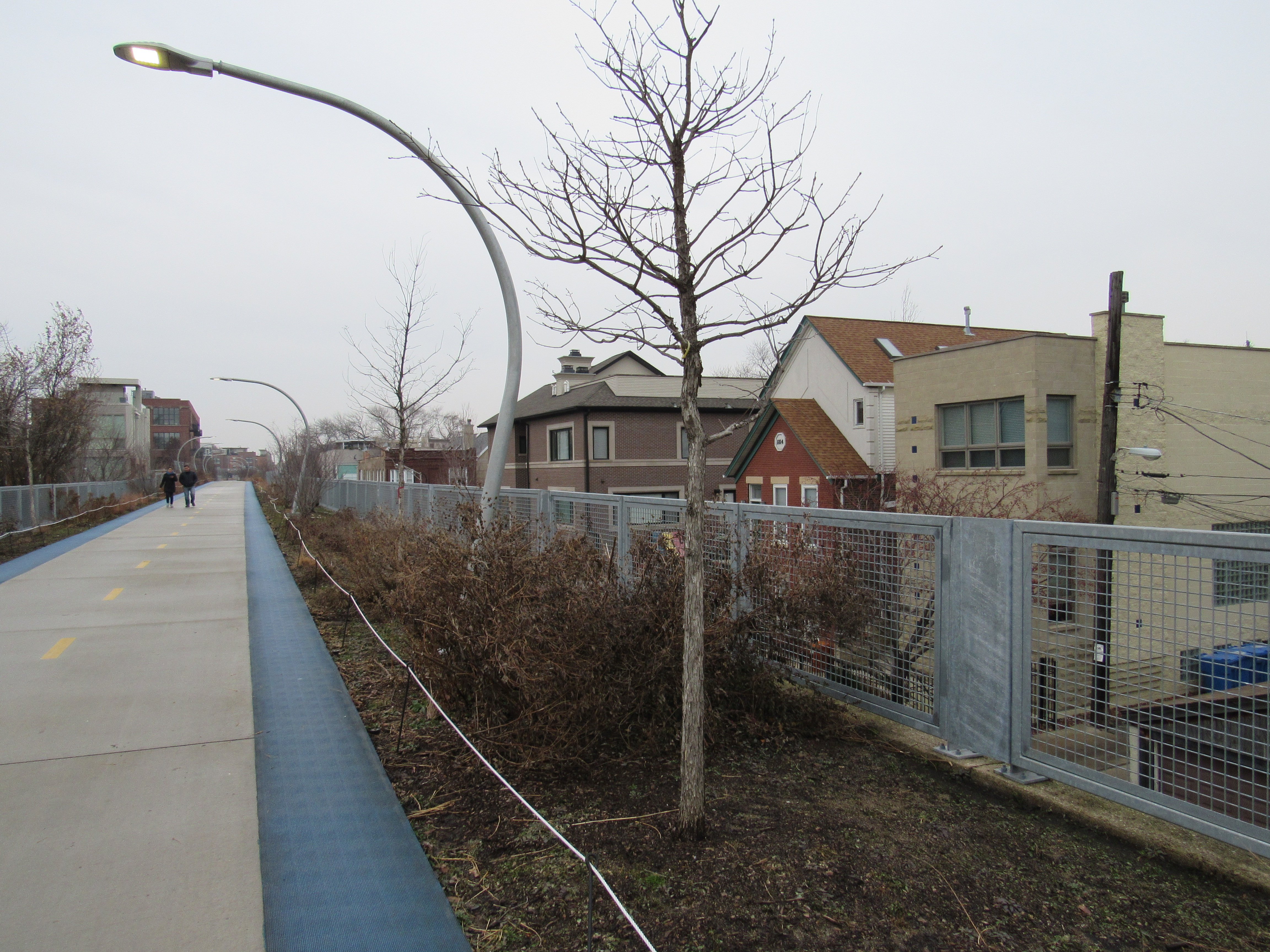 Whenever I walk the 606, I’m caught up in its concentrated energy. On a busy weekend, the central concrete trail feels narrower than it is. As often as I can, I take one of the alternative footpaths, tendrils of crushed gravel winding through miniature forests of birch and evergreen. I’m not quite shielded from the cyclists’ blurs but am grateful for the reprieve. The elevated path summons people like a green magnet. For some, it functions as an alternative exercise track, a way to squeeze a jog or bike ride into the workday. For parents pushing strollers or clasping toddlers’ hands, the trail offers safe haven where they are not required to look both ways at every intersection. Also present may be a handful of people like me rambling about, who relish viewing the city streets from this vantage point, who feel in the soles of their feet a vibrant urban future.

At Milwaukee Avenue, all three major streams of transportation intersect—foot, car, train—with trailgoers passing between the street below and the elevated tracks slicing diagonally above. The city’s layers are exquisitely felt here: the El clanking through the canopy, pedestrians and cyclists sharing the understory with the rooftops of three-floor walkups, and automobiles possessing the forest floor. Layers of the urban biome. 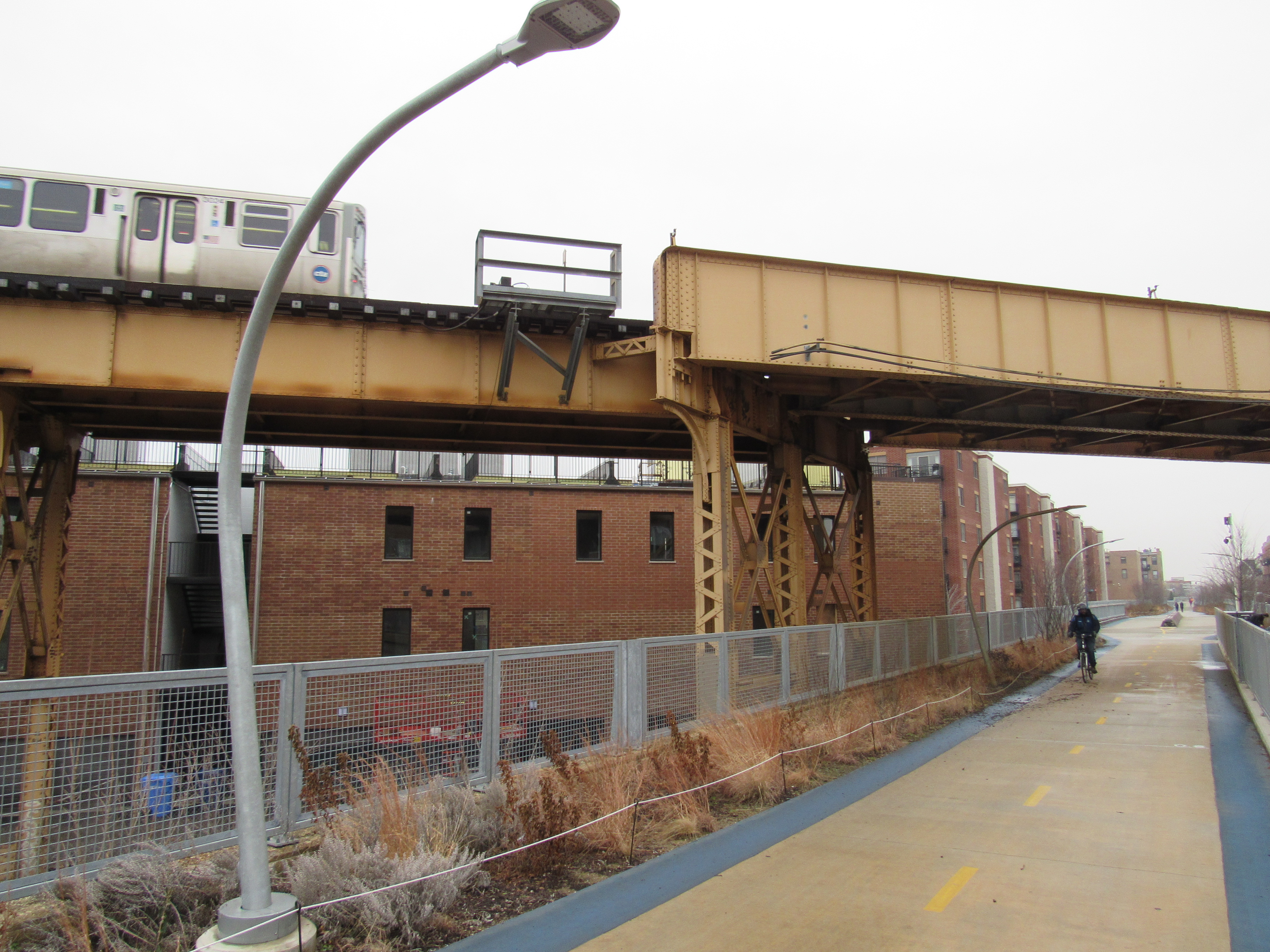 In the late nineteenth and early twentieth centuries, the freight trains in Chicago ran at street-level. A troubling number of injuries and deaths prompted city officials to mandate that the trains be raised, which produced the track on which I now am walking. A transposition of transportation: the industrial trains are gone and the pedestrians have been raised to avoid the cars.

Rail-to-trail conversions possess a special allure. The byproducts of trains—noise, pollution, and physical barriers—that once divided communities become corridors of connection. The 606 feels like a broken bone on the mend. The trail passes through four Chicago neighborhoods—Logan Square, Humboldt Park, Bucktown, and Wicker Park—that once epitomized the rough and tumble qualities for which Chicago is known. The area was characterized by its working class grit and small manufacturing enterprises, which were serviced by the trains. “You may well find lovelier lovelies, but never a lovely so real,” wrote novelist Nelson Algren, who lived in Wicker Park for over a decade in the 1940s and 50s, chronicling the lives of the city’s outcasts and down-on-their-luck dreamers. But the city is an organism of change. By the mid-1990s the train traffic ceased. This portion of the city began to show its indebtedness to industry only by its lingering lack of greenspace. One of the neighborhoods that intersects with the trail, Logan Square, had the least amount of open public space in the entire city. This lack was one factor seeding the desire for the 606.

The former railbed is mostly ramrod straight, yet the trail is designed to curve pleasantly, both side to side and with gentle vertical rises and dips, like a slow undulation of sound shaken across the city. Walk the full length of the 606 and you experience an aural gradient that seems to ride this wave. The eastern trailhead rubs close to a continuous thrum of cars on Interstate 90/94. Construction saws whine and hydraulic lifts groan, signaling warehouse conversions to posh loft spaces and high-end condos. Sounds become more subdued as you go further west, away from the highway and the Metra tracks. Distant train horns, the puttering of idling trucks, and scattered car honks cede air to gossiping sparrows and the clicking burbles of starlings. The tap-tap of car horns is replaced by the tap-tap-tap of downy woodpeckers. Two-flats give way to single-family homes with postage-stamp yards, a few nearby schools with playground laughter, some still vacant lots. Juncos flit between the purple coneflower, little bluestem, and silvery sage, luring pedestrians to the end of the wave. 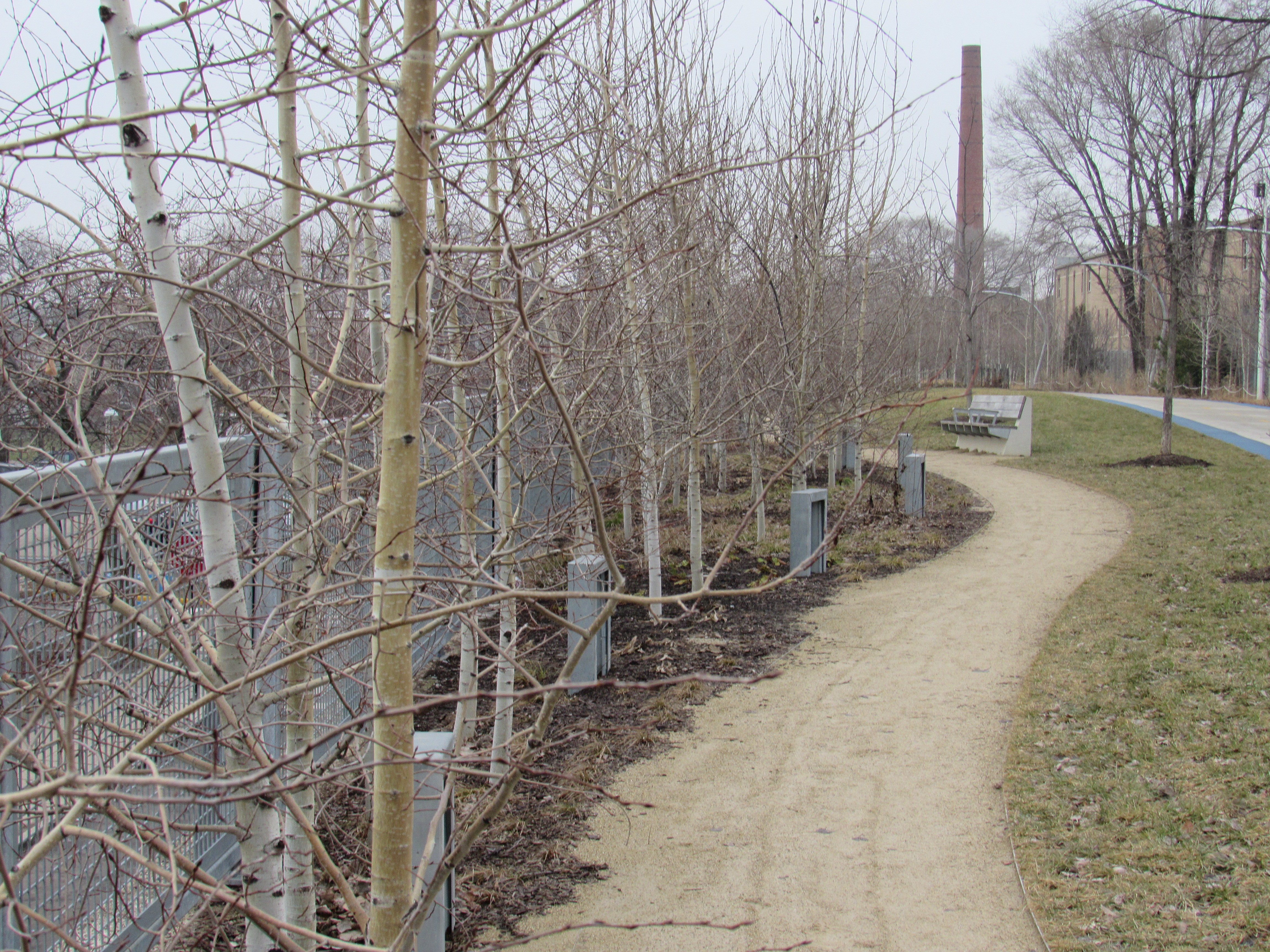 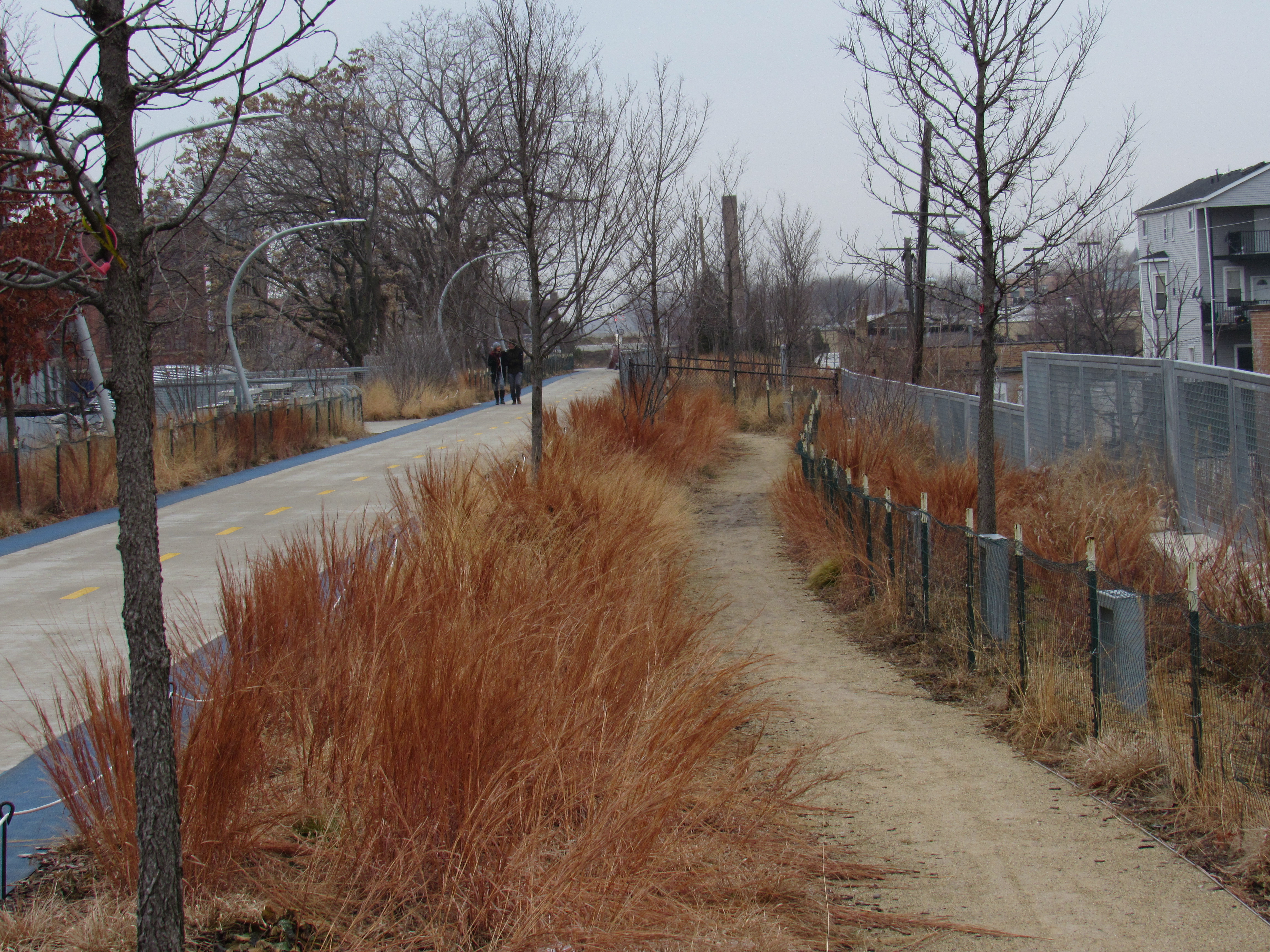 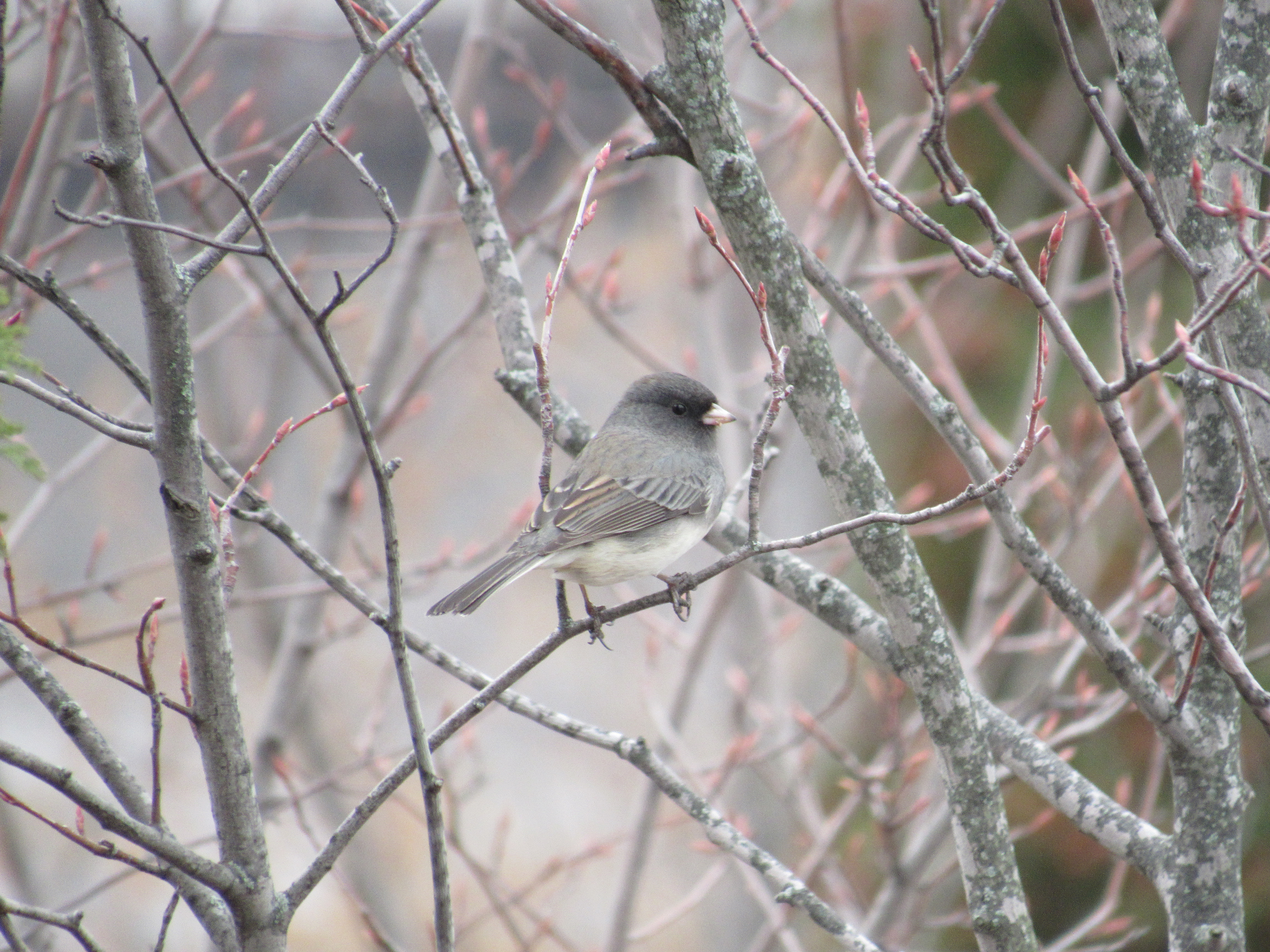 The western terminus of the 606 diverges into three parts: a walker may descend to street level and return to the workaday world, either going north or south, back to the grind, back to the street traffic. Or the walker can go up, accepting an invitation from an ascending spiral pathway. This latter path orbits grassy slopes until the bare brown gravel opens upon an oblong-shaped clearing. Known as “the observatory,” this end of the trail provides a grand finale, a modest crow’s nest for watching the sun set over the city or a raised dais for contemplating the stars. The slight elevation allows for seemingly infinite sightlines on the horizontal plane of Chicago. 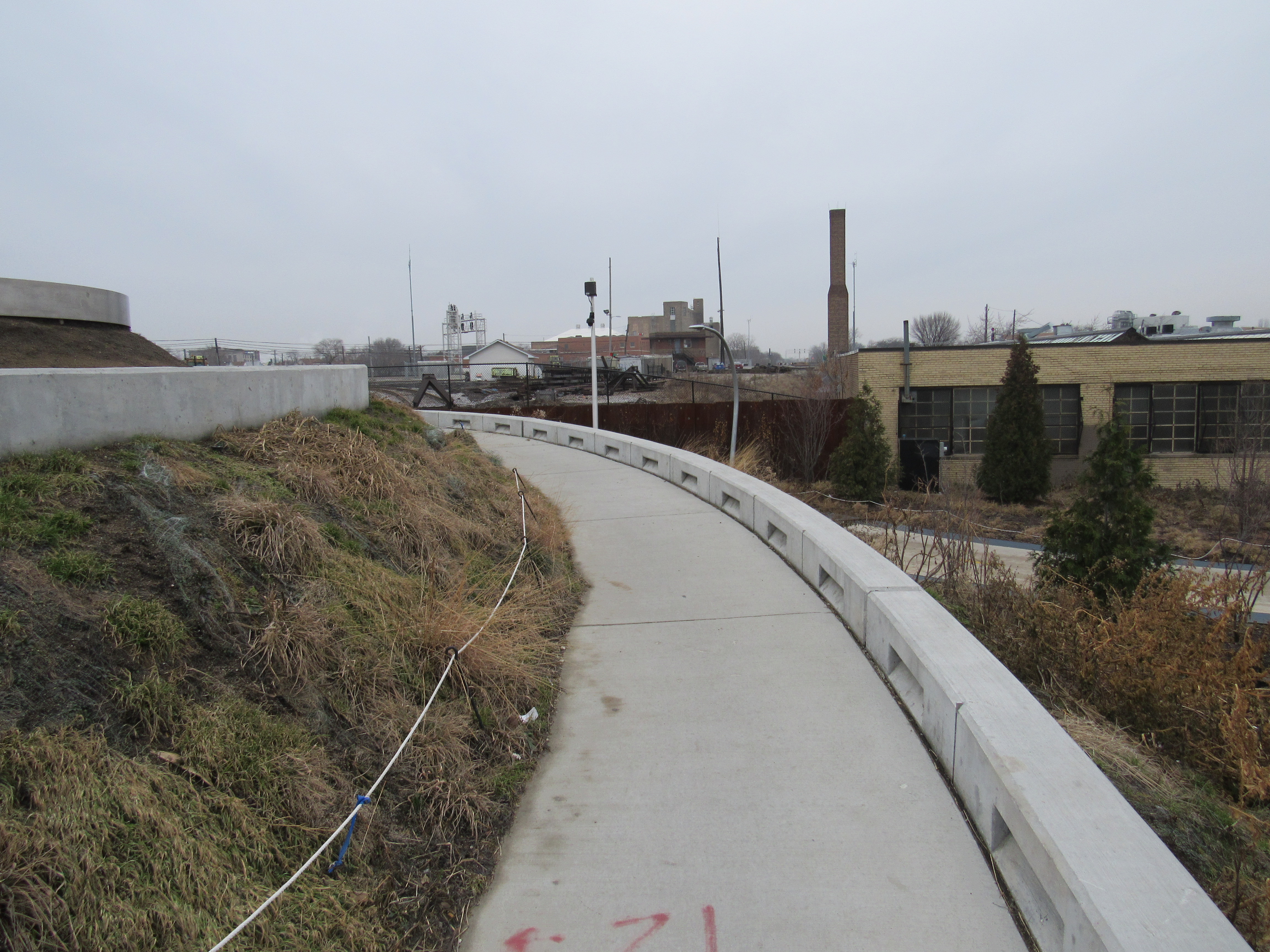 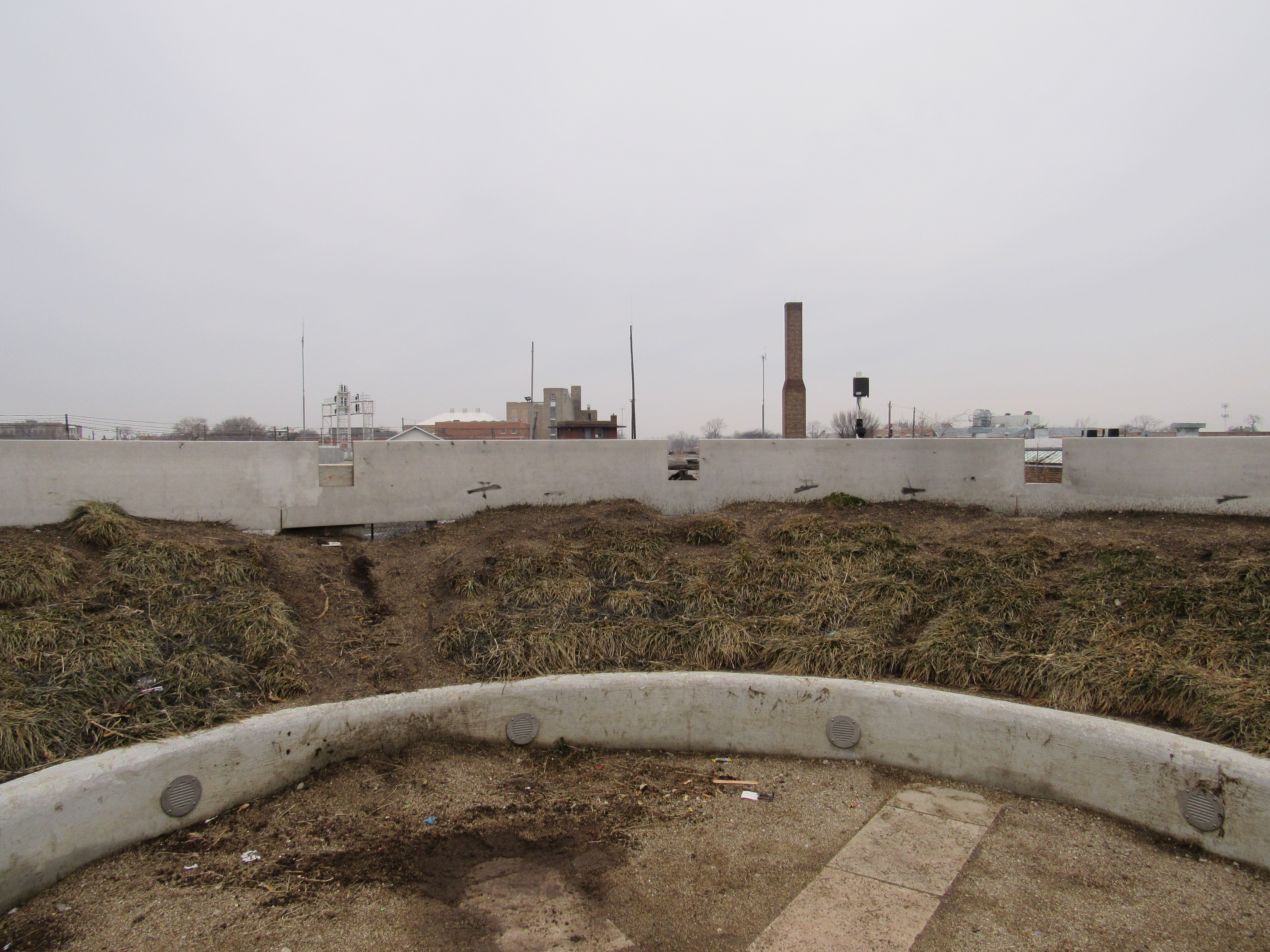 This trail feature is loosely modeled after an ancient solar observatory in Chankillo, Peru. At the western end of the clearing, a low-lying cement wall juts from a grassy slope that also doubles as a place to rest your back. Three notches in this retaining wall divide the year, framing the points on the horizon where the sun sets during solstices and equinoxes. Under one’s feet, a cement X crosses the ground near the center of the opening, pointing at two of the notches, marking the path of the sun at its winter and summer extremes. Just outside the oblong clearing, a simple sculpture, looking something like an oversize dial for a manual timer, points toward the central notch. The word “equinox” is chiseled in its side.

I slowly pace the oval circumference, hands clasped in the small of my back. I stop at the squared notches in the retaining wall, bending to look through each one as though it were a spyglass for viewing the western spread of the city. I raise up and arch my body, chest facing the sky. Somehow the strangeness of the planet tipping toward and away from the sun feels more real. Like I should be grateful I don’t shake loose. At the same time, I feel more grounded to everything, knowing we’re all sailing through space together around the sun—the bur oaks, the downy woodpeckers, the purple coneflowers.

When I first began working in downtown Chicago, other than all the revolving doors, one of the architectural oddities that stood out to me was the innumerable clocks in the city. At some street intersections, multiple buildings thrust their giant time pieces over the sidewalks. This decorative infatuation with clocks is perhaps a quaint holdover from the turn of the twentieth century, when not everyone was carrying an iPhone, but it also advertises a particular philosophy of place. This is a city that prides itself on its can-do work ethic. Time is money. Those clocks remind passersby, “Aren’t you supposed to be somewhere doing something?” Hurry along now. Chop, chop. From its pioneer origins to its industrial heyday, Chicago has always been, to quote from Algren again, “a city on the make,” in the business of doing business. It was built for it. Chicago’s railroads opened the western frontier. White pine from the Northwoods. Cattle from Texas. Grains from the fruited plains of Nebraska and Kansas. Chicago was the linchpin that linked distant markets, collapsed space and time, and made millionaires out of merchants, steel men, and land speculators.

Somehow the earth and stone sculpture of the 606’s observatory means more in this context of busyness. The equinox and solstice notches mark a deliberate redirection of attention: to the deeper cycles that all our daily artifactual microdivisions rest upon. These larger orbits touch your skin as the bite of winter, lure the flowers out of hiding in spring, send the butterflies skipping across the grass in summer, and light the crimson fireworks of sumac trees in the fall. The observatory reminds me that our paths are entangled with the lives of other beings, all of us dependent on that sun now going down on the western edge of the city. It is a place of quiet presence, inviting our sun-hungry bodies out of the enclosures of cars, off of the streets, away from the clocks. Entering or exiting the trail, a moment of pause: a reminder of what a city and all its creatures depend on for sustenance. A grateful look skyward for what truly keeps all the layers of the urban biome humming. 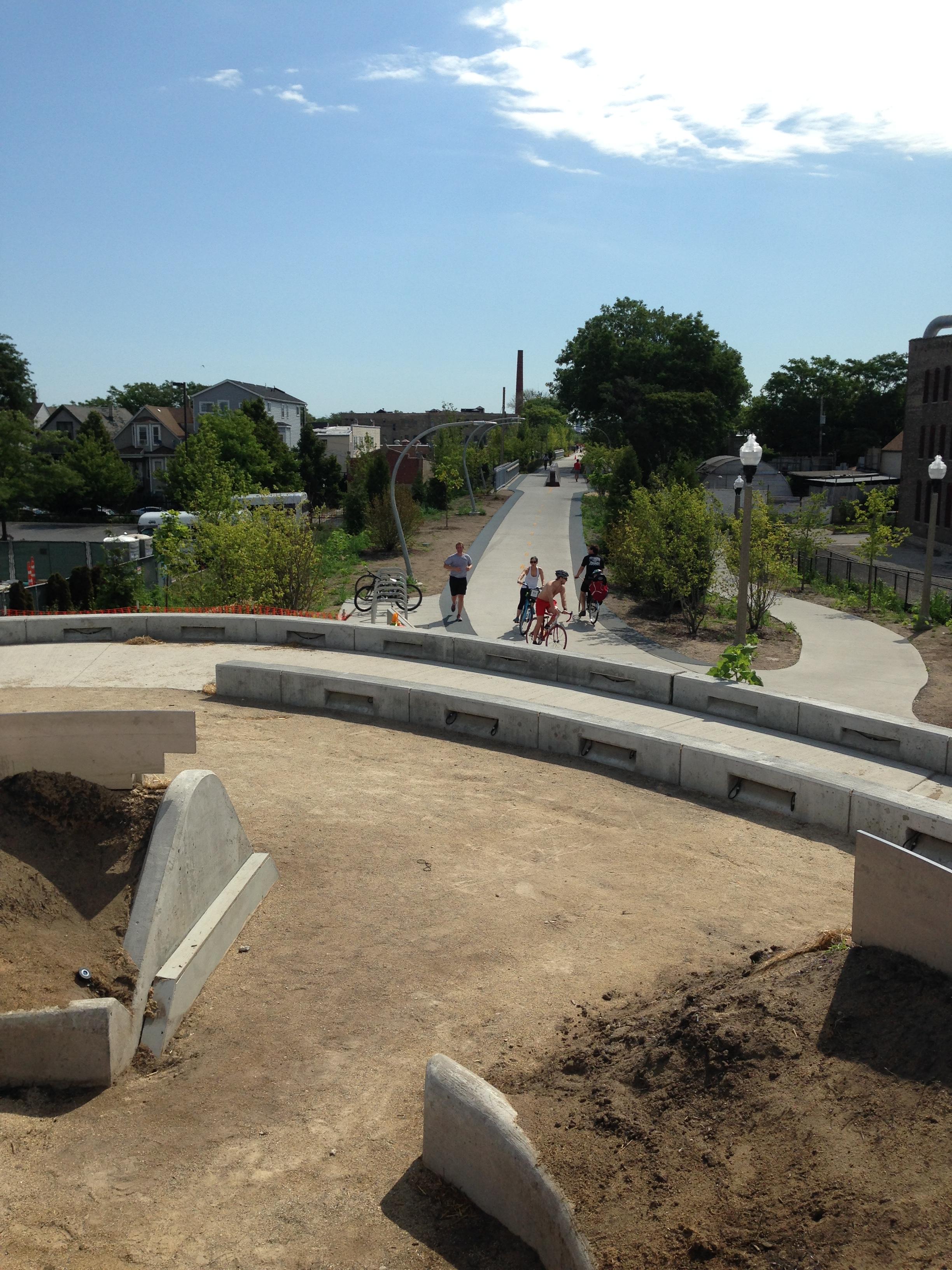