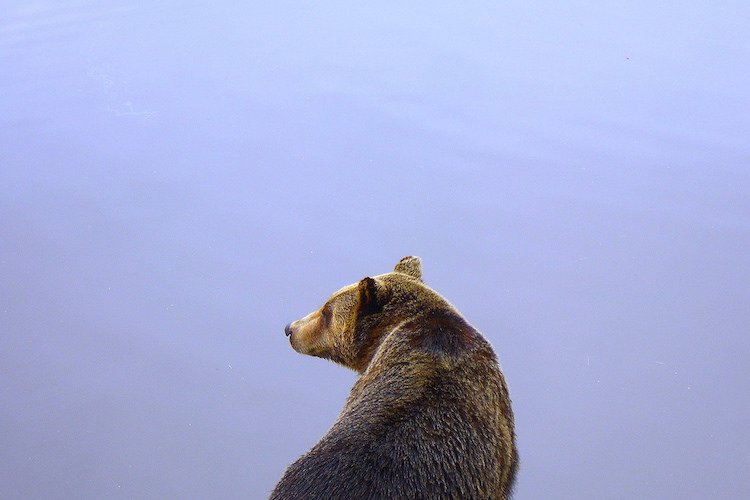 A diesel rattles, gravel crunches, camera shutters click, and a collective breath is inhaled by a group of twenty. Mist hangs over the stalled cars blocking two lanes of traffic near Avalanche Peak. A hush descends on all of us idling in our vehicles and on those standing outside daring to get too close to an animal that is trying to cross the road. The animal is silent save a random snort after lifting his head in the air to catch a scent laden with vehicle exhaust. The bulk of his body makes little noise in the drying grass that caresses his damp, grizzled frame. He swivels his head from left to right, gauging the safest passage between the hulking obstacles of metal. He lifts his front, right paw—claws extending outward—and takes a step.

The young boar is on an embankment, next to the road, about twenty-five feet in front of my vehicle. I have been searching for this moment, an actual grizzly bear sighting, for three weeks. I never thought it would make me feel sick rather than exhilarated. 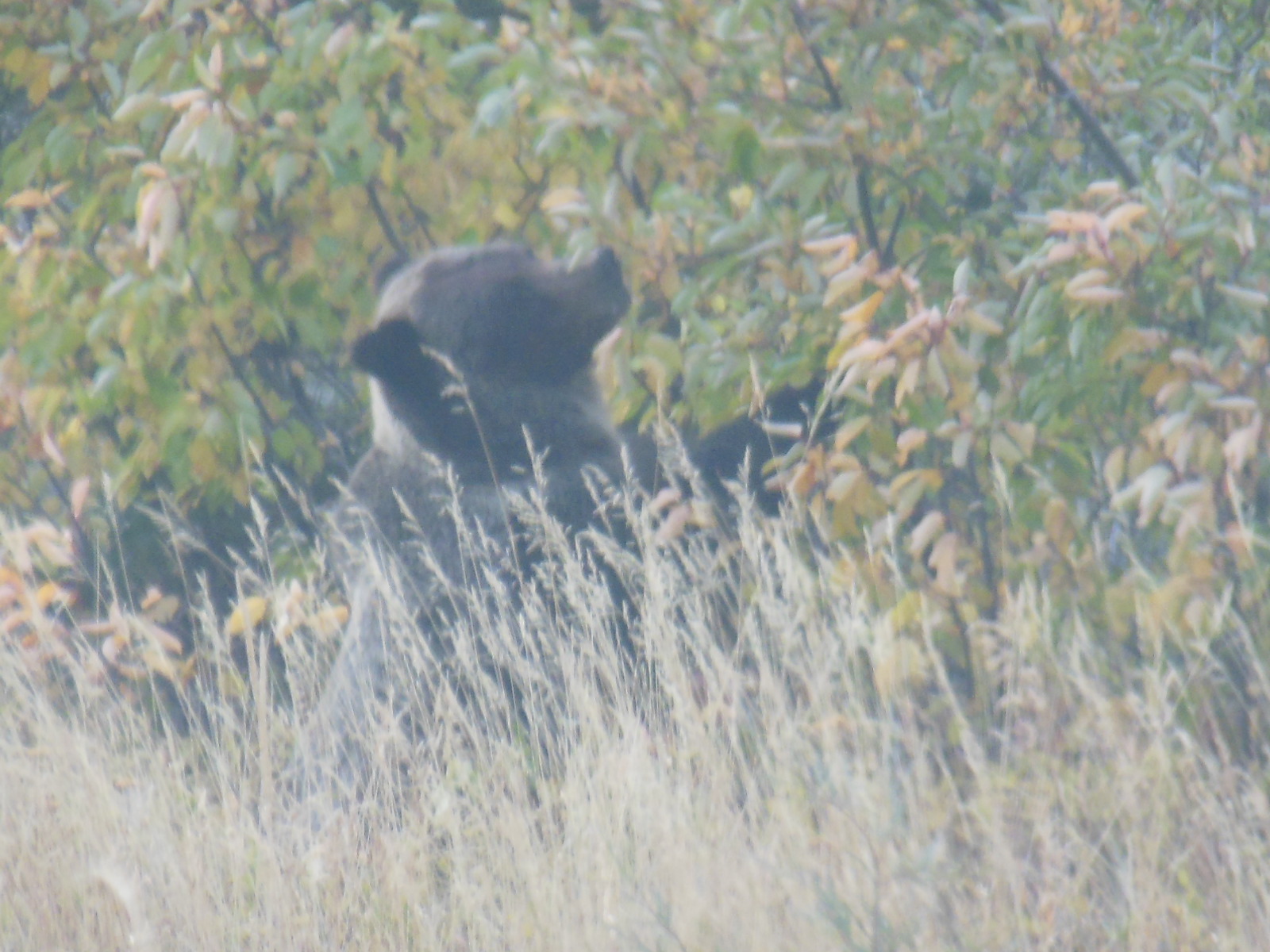 When I arrived in Cody, Wyoming, the first grizzly hunt in the state was in jeopardy because of a pending lawsuit. The state, along with its neighbors, Idaho and Montana, had been managing the Greater Yellowstone grizzly population for a little over a year. The United States Fish and Wildlife Service had been the previous caretaker of the iconic and endangered species until the states had successfully argued for the delisting of Ursus arctos horribilis from a four-decade protection order. On the day the grizzly was delisted, hunters started whetting their chops for a chance to kill one. They came close. Fortunately, a federal judge overturned the bears’ delisting and restored them to endangered status.

I first became intrigued with finding a grizzly while reading an article about the species after my arrival to Cody. I had sped away from the suffocating August heat of my hometown, Tucson, Arizona. With the city’s vast expansion in the four cardinal directions, asphalt and vehicle exhaust now traps the excessive heat (110 degrees plus) and humidity of the monsoon season within. Relief has become hard to find compared to past years, when the heat would build to reliable crescendos and the sacred monsoon storms would gift the city and its surrounding environs with moisture and the pungent aroma of creosote bush. I headed north, thinking about grizzly bears and cooler climes. Now, sitting outside a coffee shop in downtown Cody, I was grateful to be dressed in jeans and a long-sleeved shirt in the eighty-degree afternoon shade.

Staring down the road—to the beginning of the North Fork that would eventually lead to the east entrance of Yellowstone—I sipped my coffee while pondering the irony of the majestic omnivore being a main tourist draw. People passing by my table could choose among myriad tourist shops offering t-shirts with the animal’s image embossed somewhere on its cloth. Local burgers and beers featured the animal’s name somewhere in their titles. Billboards around town reminded onlookers that grizzly bears should be shot with a camera, not a gun. Quite the opposite desire of some citizens in the region.

Over and over in the newspaper article I was reading, Wyoming Game and Fish officials, along with local hunting guides, swore up and down about the overpopulation of the grizzly in the area. I decided to test their tenacious defense of hunting such an iconic species: grizzlies were everywhere!

I began to travel to all the places that were supposedly crawling with grizzlies: Dead Indian Pass, Sunlight Basin, Wapiti, and anywhere along the North Fork. True, I did find grizzly bear tracks and accompanying piles of chokecherry scat, but I had yet to see the great bear in person. I grew impatient. Finally, after weeks of searching, I was in the midst of my first encounter. 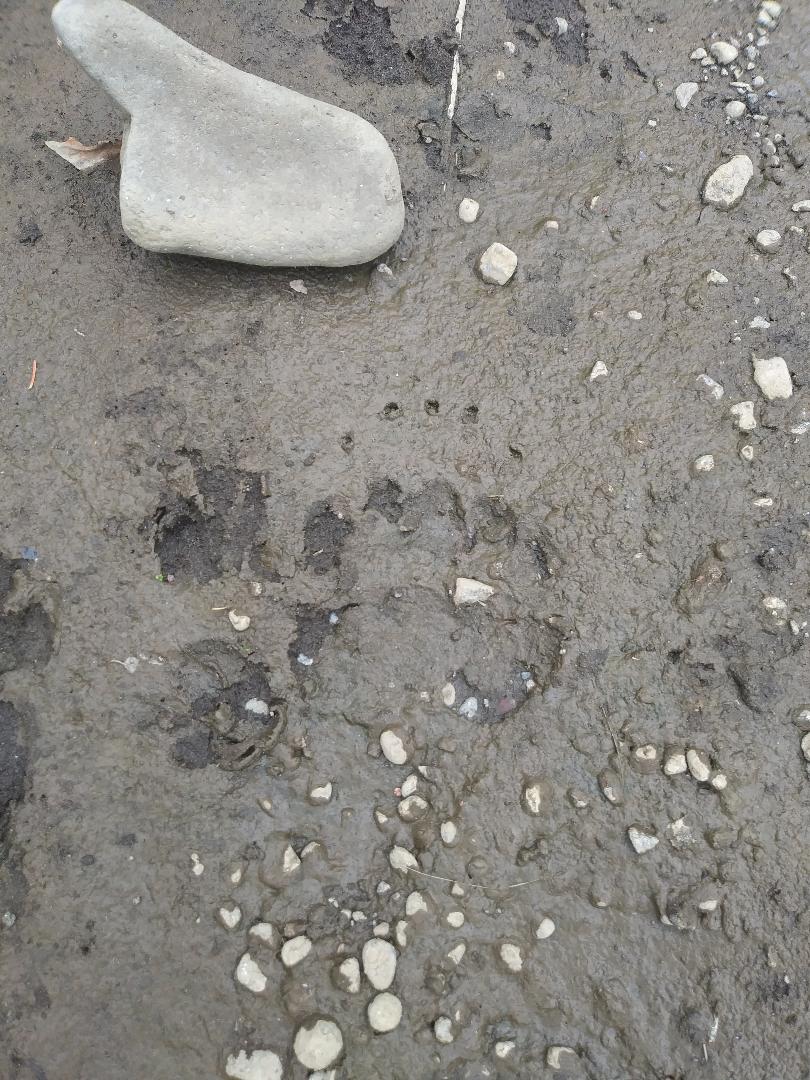 The boar looks young, maybe 400 pounds. His silver-tinged brown coat shines in the fading sun as miniscule water droplets highlight colored rainbow flecks in his fur. The boar is lumbering from a steep scree slope and making his way up a short incline to the side of the road. His destination is north, to a gentler hill of pine.

I watch the grizzly lift his nose to the air, taking in the scents of gasoline, diesel, hormones, deodorants, and foodstuffs. I feel dirty. As a collective, we gawk at the bear like adolescents taking in an illicit peep show. As the boar tromps up the embankment and attempts to find a way in between the stalled cars, I feel gross. The cat calls and whistles begin again. Each shout asking the bear to fulfill someone’s need for danger, excitement, curiosity, or the desire to be close to the “wild.” Each call-out for the bear’s attention becomes the equivalent of sliding a quarter into the money machine to ensure the viewing window stays open for a longer show. 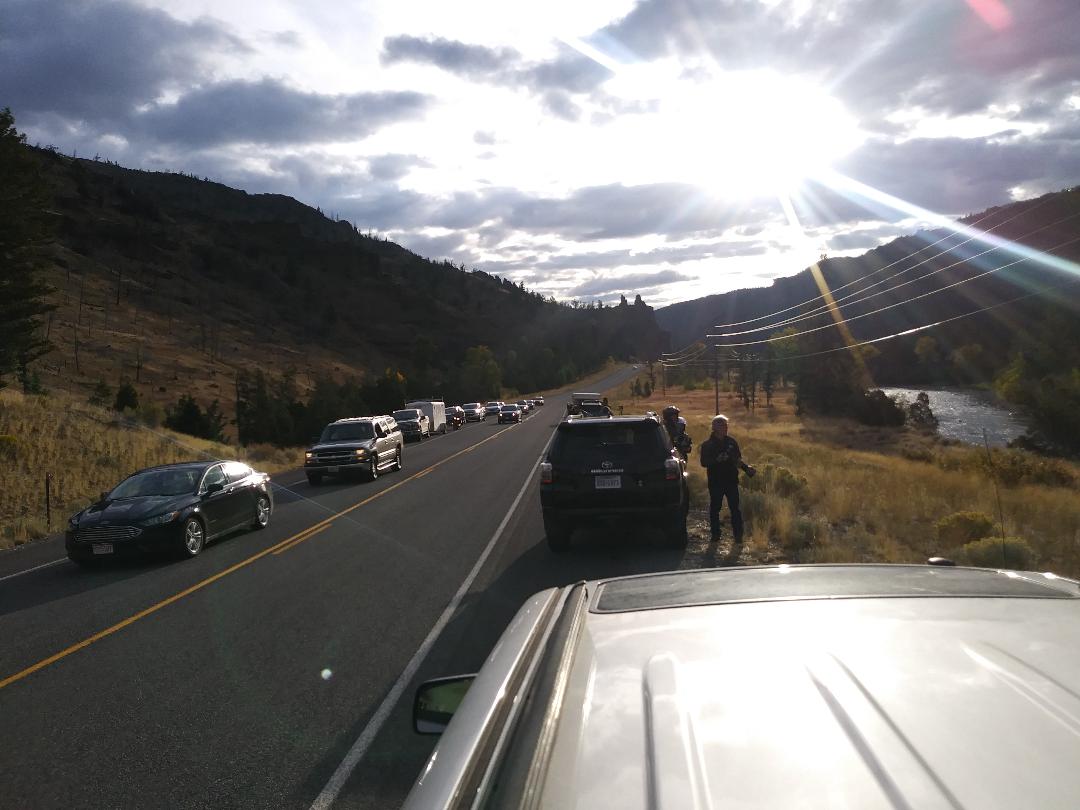 The bear is done. He weaves his way between Prius bumpers and two-ton grills. He hastily makes it safely to where his sights are set, running up the slope to get away from the uninvited voyeurs into his life.

My brief moment of glee at seeing the majestic and maligned bear turns to pensive introspection. What am I doing here?

I, too, am searching for something I believe the bear can provide: a connection, awe, a thrill. And fear. No stranger to predator encounters from my Southwest homeland—black bear, mountain lions, even a jaguar—the grizzly bear awakens a first for me, fear. I am also, selfishly, looking to face my fear—perhaps too little of it available in the rapidly expanding Tucson. I, just like everyone else parked on this road, am using the bear for my own needs.

My dogs are getting restless. They have been sitting in the back of the car, patiently waiting for a chance to get out and stretch their legs. We leave the park and drive east, back to Cody. Not far down the North Fork, I pull into a deserted campsite that is shrouded in alder, aspen, and ash trees. After passing several piles of bear scat, I park by an old fire ring about fifteen feet away from the lulling ripples of the Shoshone River. Bohdi and Tesoro are leashed up, and we head to the river for a drink before a short walk on the dirt road. The sky is lowering to night but the air is a warm breeze. My middle-aged brindle pit mix and elderly yellow lab get stuck at the base of an old ash. Their noses work in tandem, inhaling whatever scents have been embedded in its bark. Bored, I drop their leashes and walk the few feet to the river’s edge. 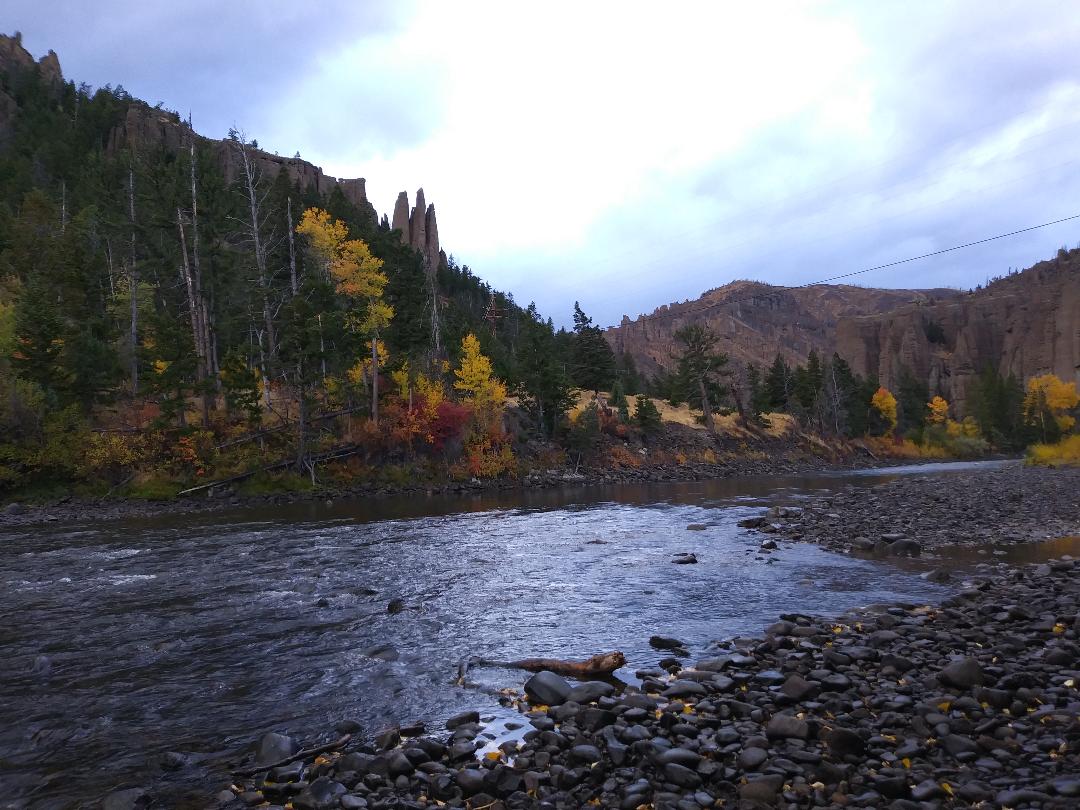 I think I whisper the obvious inside my mind, but I’m not sure. I stand still and empty, staring at the bear fording the river less than a hundred yards upstream from me. His silhouette joins the violet sky and inky flow of the river. A pine-studded incline with columnar volcanic formations is the backdrop to his forward journey. My eyes search for the muscled hump to confirm he is who I think he is, a grizz. The shadowed canyon paints him a uniform dark brown. His exhales are timed with his steps. He is huge and heading to the same side of the river as me.

Suddenly, the boar stops in mid-stride and lifts his snout to the sky. I hear his rapid intakes of air. His head then swivels to my location. The world collapses around us. We look at one another, two species sharing the same space in the world. I feel no fear, only amazement that our breaths are mingling on the same breeze in this fall scented canyon. The bear continues with his step forward and then disappears. The river has swallowed him whole. A moment later, his head emerges from the foaming streaks of liquid. He shakes the water from his eyes and regains focus on the opposite bank, swimming instead.

I slowly walk the few feet to my oblivious dogs, who are now sniffing amongst the leaf litter at the base of the scented tree. I kneel to grab their leashes, open the back of the car, and ask them to get in. I slowly drive away from the river and back to the highway, reluctant to leave what I have ultimately been searching for—a bear, unexpectedly, while alone in his woods.

A month later, the grizzly dominates the local Cody newspaper again. This time, tragically. In the first week of October, Wyoming Game and Fish killed eight grizzly bears. Two bears were killed because of encounters with bowhunters who were out in the woods looking for elk at the time when bears are in the late stages of hyperphagia—eating as much as possible before their hibernation. The remaining victims were killed because they found a free source of food in a corn maze and in residential areas where domestic animal food sources weren’t properly stored. When asked why the bears weren’t relocated, Wyoming Game and Fish officials answered that the bears were “human habituated” and there was nowhere to move them. To me (and I’m sure others), it seemed like the state agency was taking out their frustration, maybe anger, over the re-listing of the species and the vacated hunting season on the bears. But one bear did escape.

Rumors of a grizzly in the town limits of Cody spread like a well-oiled gossip machine. The presumed boar was seen behind a business that abutted the river. Then he was spotted in a residential area. While paying for books at a local thrift shop, the last update I got about the bear was from the woman behind the counter—just north of town. Wyoming Game and Fish set up traps for the grizzly but decommissioned them when it appeared the bear had passed through town. I hope he’s found a place without so many on the lookout for him. 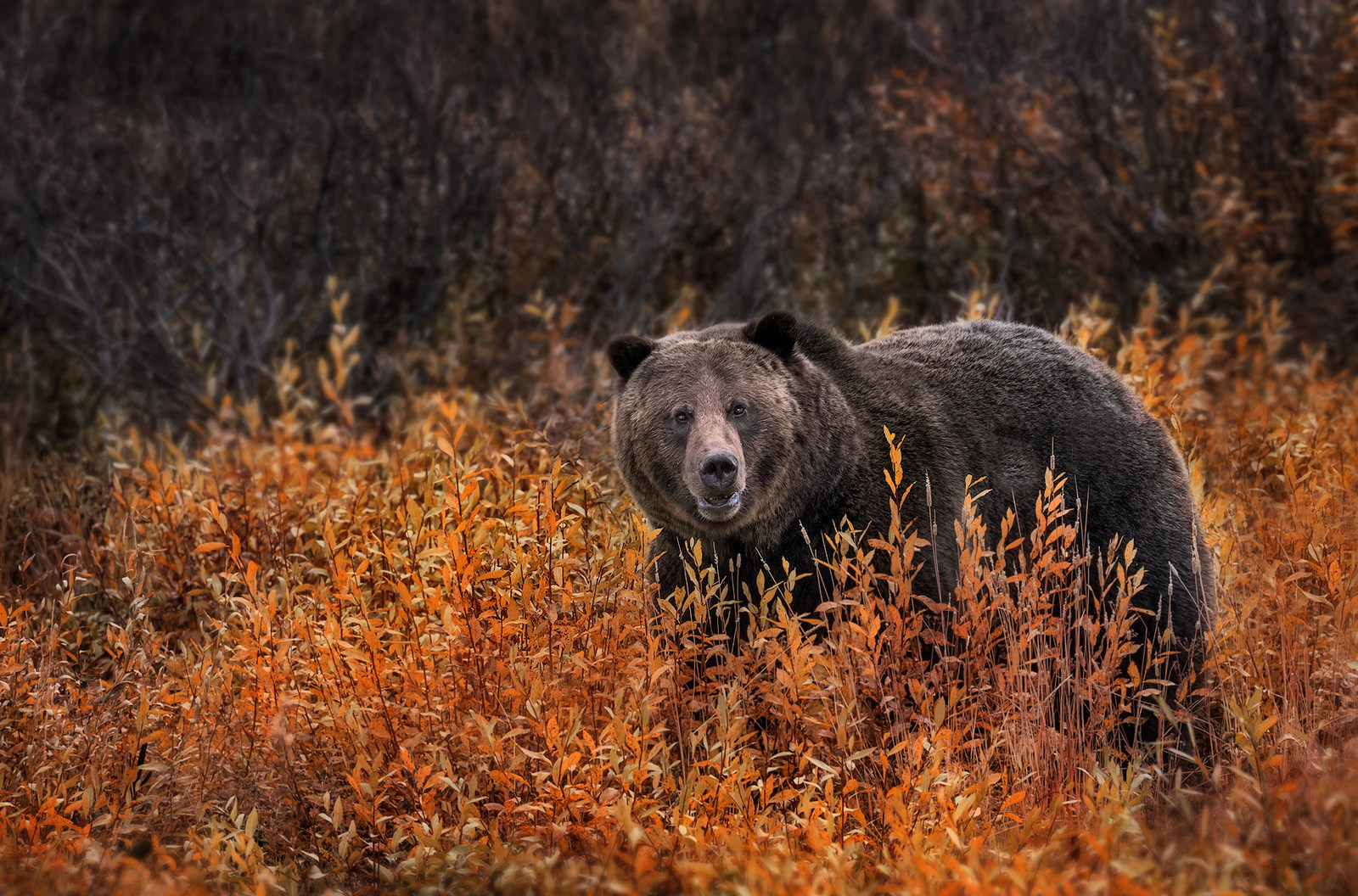 I found all of the selfish things I hoped for when I encountered the grizzly on the road and the one in the river. The awe over the sheer magnificence of the animal; the acceptance that I and they can share the same space in peace; and the thrill of the grizzlies’ close proximity. I also found fear. Not for me but for the bears that were roaming the earth unaware of all the emotions and expectations I, and others like me, made them responsible for. The bears were just being bears–simple as that. And that deserves respect.