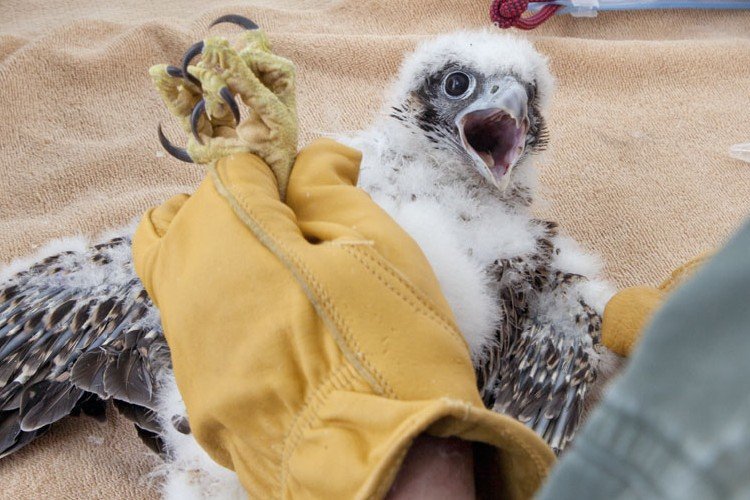 The large falcon bears down on us with intense fury, aiming herself like a missile at our heads. Our squadron of volunteers, wearing hard hats and wielding brooms, fends off her attack. She veers away abruptly, talons menacing. Thwarted but consumed with rage, she pivots to come at us again. We had provoked her in the most distressing way possible—by raiding her nest and stealing her young. She would continue to attack as long as she could. 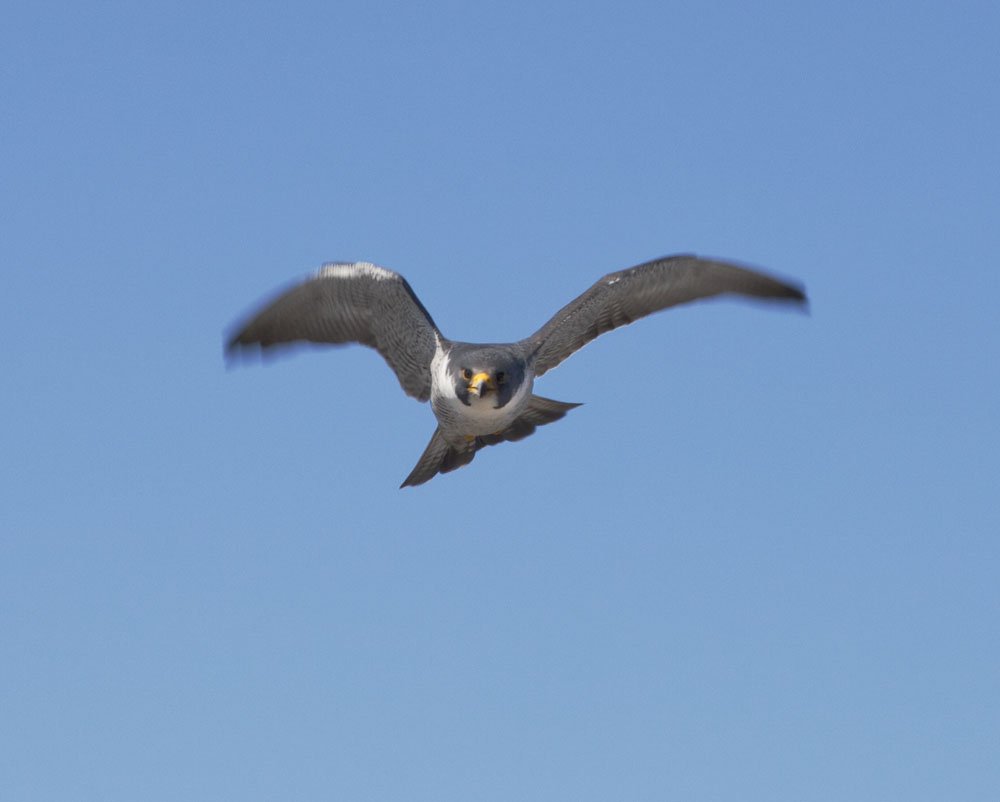 Hunched and brandishing our brooms, we make a hasty retreat across the open roof to the safety of the doorway. Here in this unlikely place, atop a power plant in the middle of Milwaukee’s industrial Menomonee Valley, we are faced with a wild animal bearing majestic power and fierce determination. 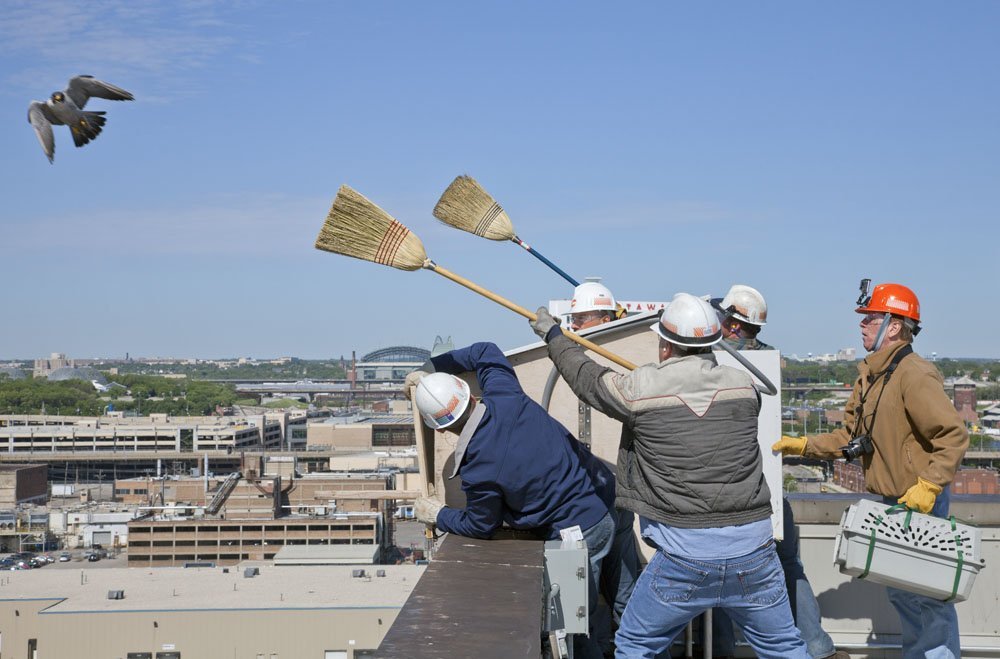 A sense of déjà vu nearly overwhelms the immediate thrill. Ten years ago, in the same place, I saw another falcon bear down on me with the same righteous fury. For the moment I shake off the memory; no time for reflection as the peregrine hones in on us again. This one isn’t going to settle for intimidation.

Greg Septon, a former researcher at the Milwaukee Public Museum and founder of the Peregrine Falcon Recovery Program, is the man responsible for our rooftop escapade. He holds an animal carrier containing four fledgling falcons that are to be banded. We descend through an ear-splitting mechanical roar in the plant’s enormous main generating chamber. Then, in the relative calm of a conference room, Septon lays the carrier gently on a table that has been prepared for the well-rehearsed banding process. But this was not to be a typical banding session. 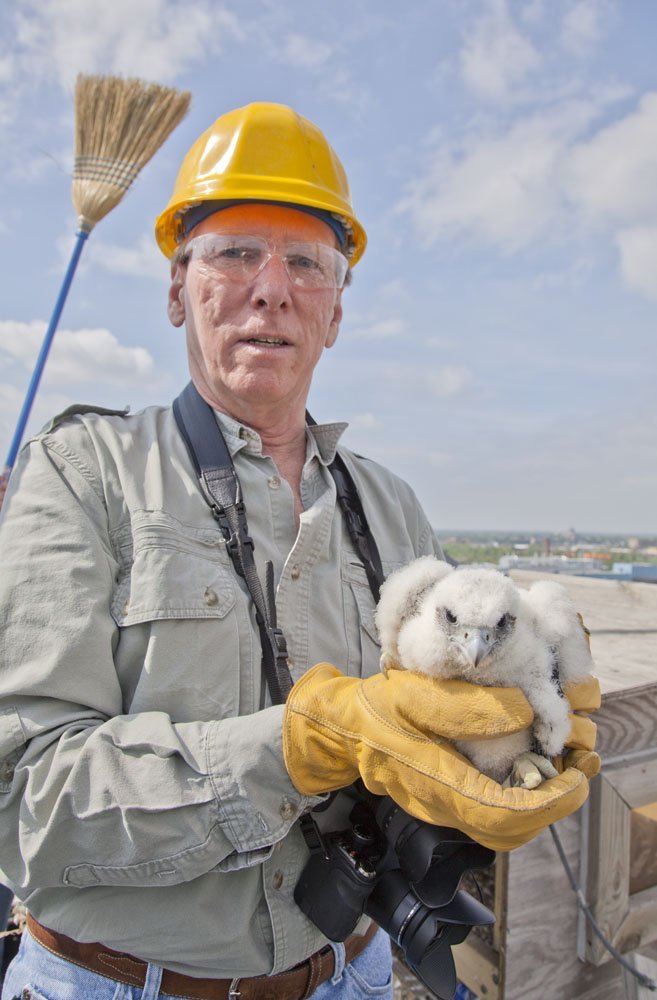 Septon has been banding peregrines every spring for 28 years. During the 2014 nesting season, he banded fifty-nine fledglings at twenty different nesting sites in Wisconsin. Banding allows scientists to manage the regional population by documenting where falcons go and where they nest. Causes of mortality, life spans, and birthrates can be tracked, and DNA records are archived as part of a database on the recovered population of Midwestern peregrines.

The presence of falcons in places like Milwaukee is significant. Historically widespread, peregrines inhabited natural cliffs like those along the Mississippi River and Wisconsin’s rocky Door County peninsula. By the mid-twentieth century, however, due to pesticide poisoning, the species was officially endangered and virtually extinct in the eastern half of North America. 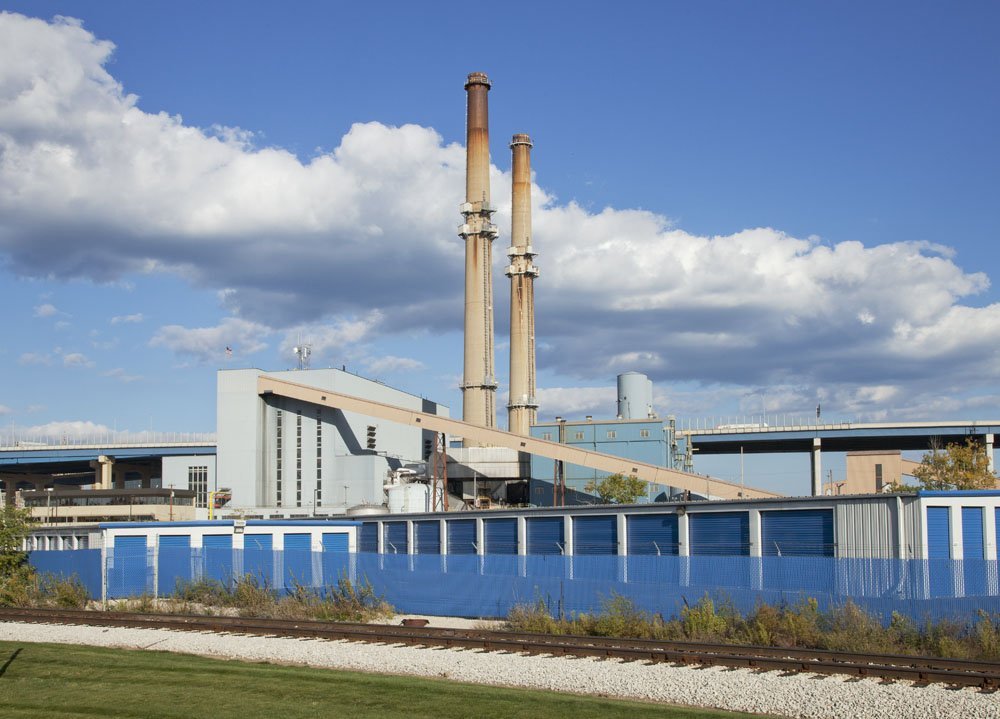 For concerned scientists like Septon, cities provide ideal conditions for the reintroduction of peregrines. Towering, cliff-like structures of concrete and steel attract the birds and provide scientists access to facilitate research and regular monitoring. As peregrines’ numbers rebounded in urban environments, they became not only a dramatic success story of wildlife recovery, but also a symbol of a new, more symbiotic relationship between caring humans and wild animal species. Once nearly the cause of their extinction, we can now claim partial responsibility for the species’ survival. 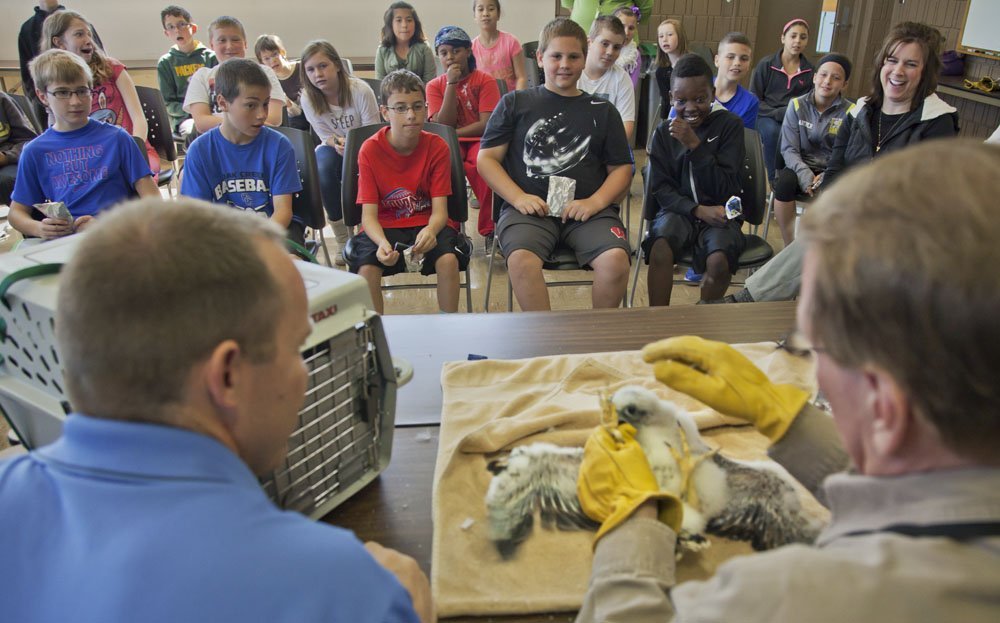 In the conference room at the Menomonee Valley Power Plant, that new relationship and commitment to stewardship plays out before a rapt fifth-grade class from Carollton Elementary in suburban Oak Creek. The school’s participation is just one of the ways the We Energies banding process differs from other local sites. My own history with the Menomonee Valley is another. 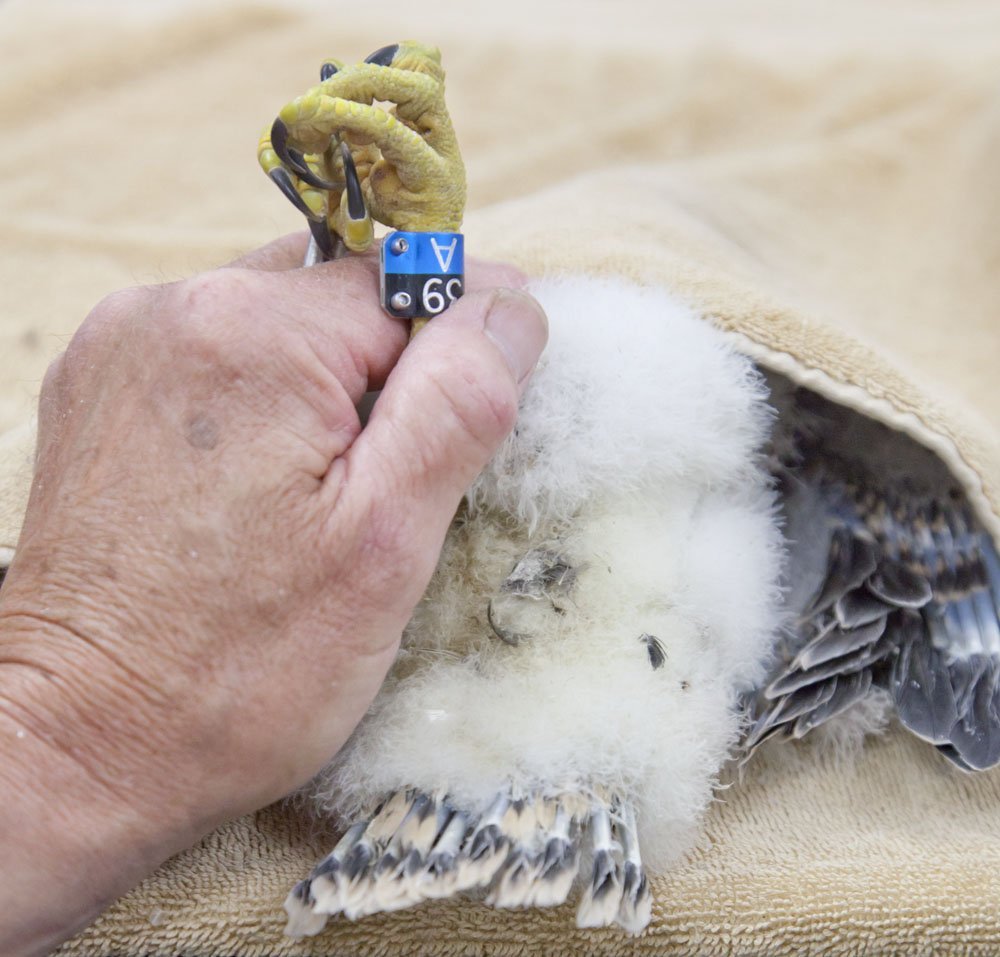 We Energies has partnered with Septon since the falcon program’s inception more than two decades ago. The educational component was added four years ago in order to complement schools’ existing science curriculums with first-hand experience of wildlife recovery and to demonstrate the importance of conservation.

Under the guidance of their teacher, Janice Posda, the Carollton fifth-graders had been raising chicks and ducklings in their classroom. Wild falcons are an exciting step up and all are riveted by the spectacle before them. 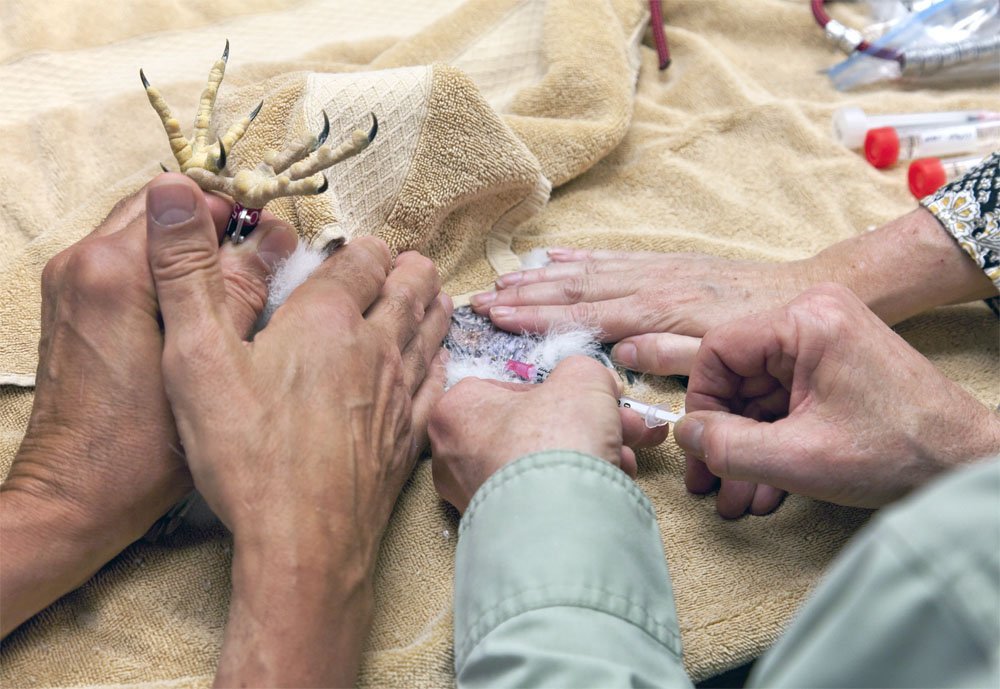 Septon, calm and efficient, clamps ID bracelets to each bird’s leg, and draws blood to record his or her DNA. As he works, he regales the students with falcon facts and personal stories. They learn that peregrines can dive at speeds faster than 230 mph, making them the fastest creatures on earth; that more than 200 falcons have hatched from nests located on six Wisconsin power plants; and that the father of these four fledglings, named Hercules, is the offspring of Herbert, who was hatched right here at the Valley Power Plant in 2004.

Was that the year I was here? I recall the event vividly but the exact date is hazy. The symmetry is seductive. Perhaps I was present at Herbert’s banding.

Enchanted by the vision of wild animals in the urban, industrial landscape, I documented that previous experience in my book Urban Wilderness: Exploring a Metropolitan Watershed. This is how I described the view from the falcon nest, which back then was located on a chimney:

Black roofs mark the few remaining factories. Vacant parcels are littered with faintly twinkling glass. Tiny trucks pick and prod at a mountain of coal to feed the furnaces beneath my feet…Across the canal in the city impoundment lot, carelessly arranged carcasses of abandoned automobiles lie atop the contours of a huge mound of gravel. In another direction lies their probable fate: scrap metal awaiting reclamation is being sorted into irregular piles.

In the decade since I wrote those words, much in the industrial valley has changed. There has been a concerted effort to revitalize, to create new jobs and to rehabilitate the ravaged landscape. There are new factories and fewer vacant lots. Underground pipelines have replaced the mountain of coal as We Energies finalizes the plant’s conversion to cleaner natural gas. Miller Compressing, the recycling operation, is still in business, but much more than metals are being reclaimed in the Menomonee Valley. 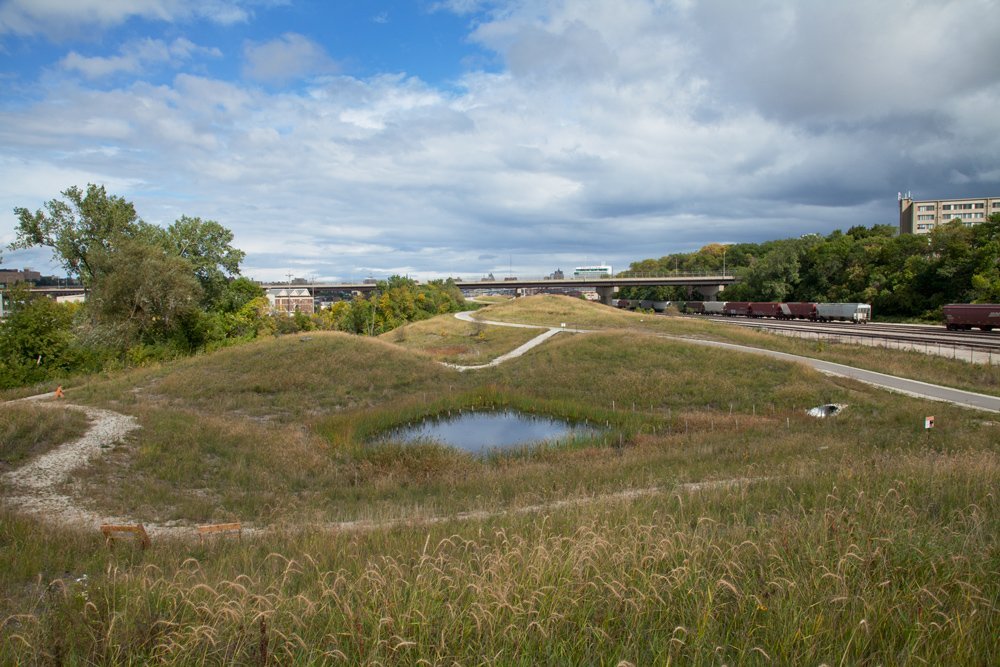 The most exhilarating development: wildlife now can inhabit—and we humans enjoy—parks and natural areas where only brownfields existed ten years ago. More restoration is planned. In 2004, when Septon banded fledgling Herbert, he was helping to create the world these young fifth-graders were born into. The falcons are a sign of hope that we can bequeath these young people a more sustainable world. 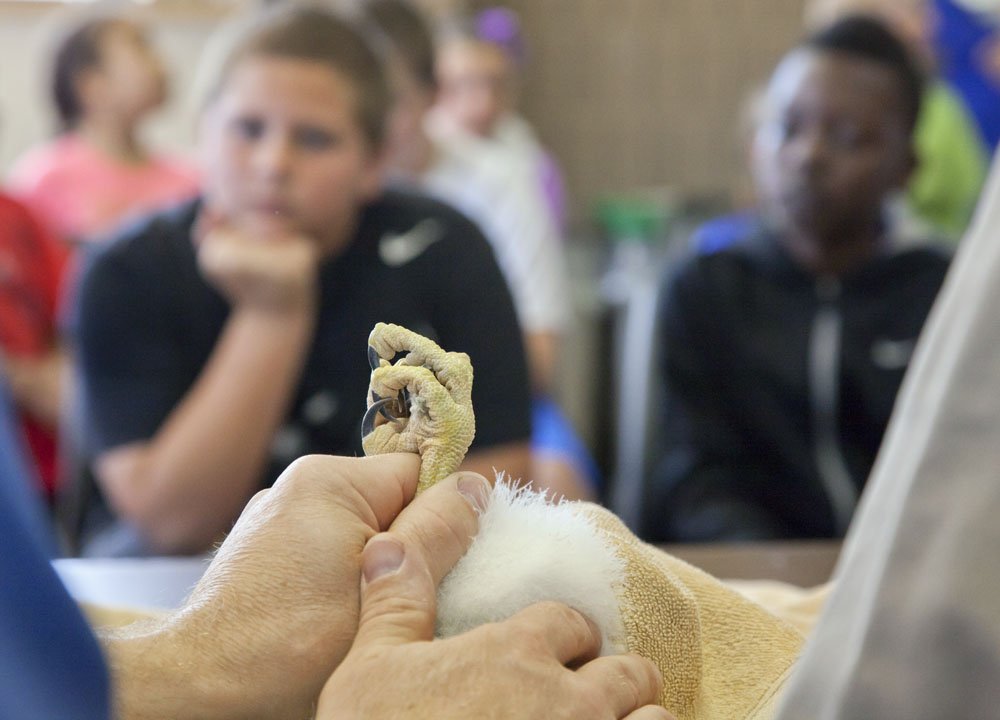 The time for naming has arrived, and the students are prepared. As Septon deftly grabs each fledgling and gently flips it onto the waiting towel he remarks on the size and calls out the sex. “It’s a girl,” he says of the first three. The only boy, characteristically smaller, is last. The children lean forward, watching intently. 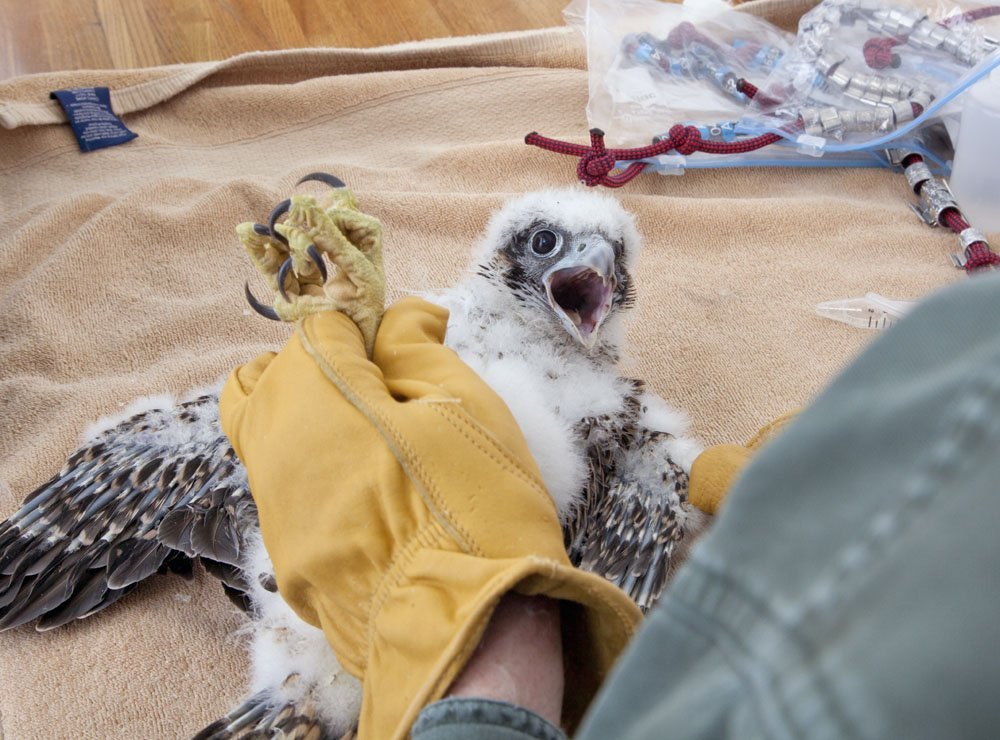 Like all of the falcons, the little male struggles and squawks. But this time there’s a problem. An unusual flinch by the young falcon during the routine blood draw causes a nick in the vein. In an attempt to staunch the bleeding, Septon applies styptic powder. His demeanor shifts ever so slightly, more business-like. He asks the class to be patient. “We may be here a while,” he tells us. “My whole concern now is for the bird.” He repeats the phrase, like a mantra.

I ask how often this occurs. “In 28 years, this is the second time,” he says. 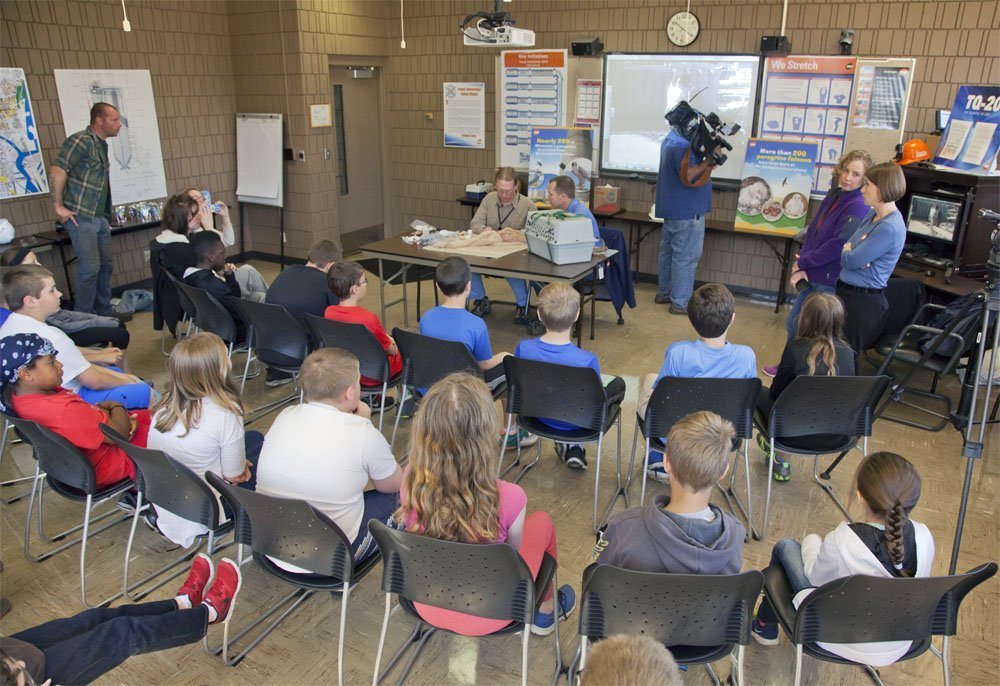 For 28 years Septon’s concern has been for the birds. Fortunately, his concern reflects a similar shift in society at large. Together he and I traveled around the city to visit five nest sites. I was struck by the universality of the experience. At each place people stopped what they were doing to witness the event, enthralled by the presence of these wild and fragile animals.

I think back to an observation I made ten years ago:

Once in their lives these wild creatures must endure this violation because our society has decided to care whether they live or die. The look in their eyes is a clear sign that banding doesn’t tame them, but it creates a platform on which we can build a case for mutual survival. 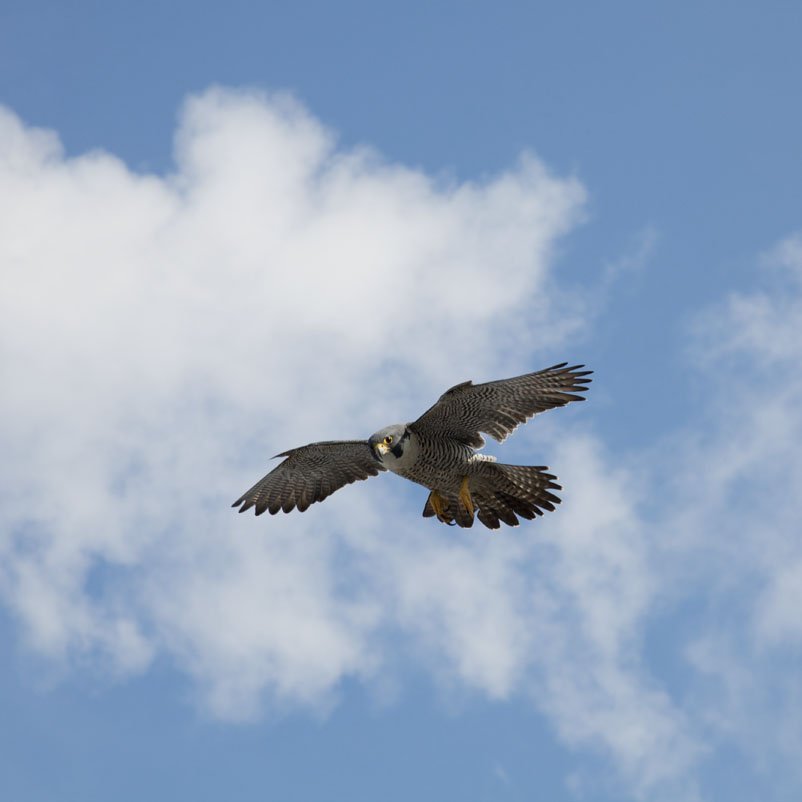 Most find it easier to conjure images of raptors lofting above cliffs like those at Wisconsin’s Devil’s Lake or Wyalusing state parks. But it is increasingly possible and terribly important to look at the monuments of Milwaukee and other urban habitats and visualize the peregrine adapting to a transformed environment—an environment we have created, for them and for ourselves.

Peregrines are still listed as endangered in Wisconsin and are still in need of our stewardship. If we want them to remain a part of our urban landscape for future generations, we must continue to provide them safe nest sites and effectively manage their population. 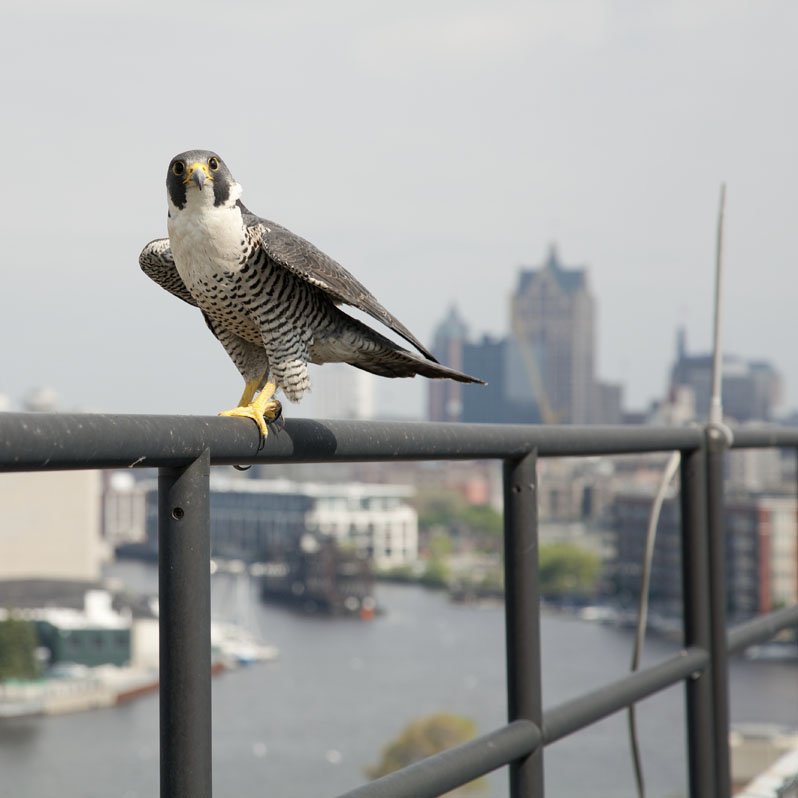 Eventually, the bleeding stops. Septon signals his relief and repeats his mantra. The students, having grown restless during the wait, quickly hush with renewed enchantment. They, too, are visibly relieved. Still squawking, the little male, now dubbed “Krypton” by the students, rejoins his sisters, Argon, Radon and Xenon, in the crate. Then, as he’s done countless times, Septon returns the fledglings to the rooftop nest and stands back to allow a more subdued but still agitated mother to return and tend to her brood.

All photographs by Eddee Daniel. To see more images from all five banding sites in the Milwaukee area, go to my Flickr album.

A version of this piece appeared in Milwaukee Magazine on June 23, 2015.