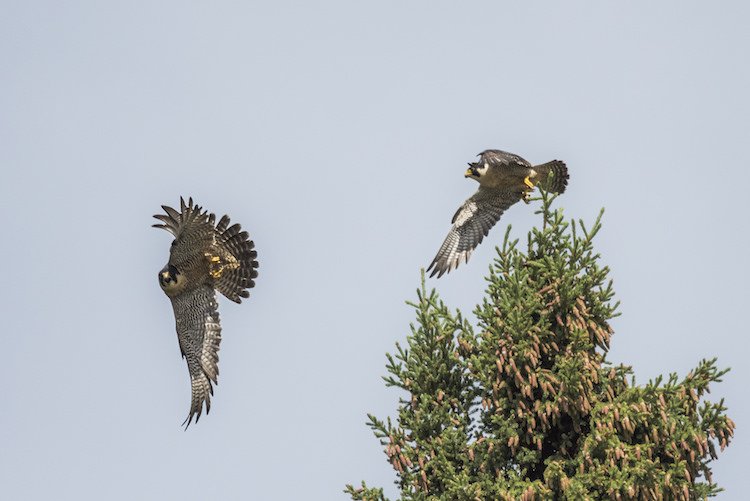 They caution us with their high-pitched cry as we reach the top of the bluff, agitated, cautioning, a sharp threat sketching across the valley. Then one of them jumps off the cliff and begins circling, mirroring time, then suddenly dives straight down at us, fast and urgent.

The falcon’s guard their nest while Miguel and I hike and walk and exist stale and still wide-eyed, uneasy in the wake of our second miscarriage. Miguel and I exist in this uneasy wake, moving but un-moving, while the peregrines circle with fury, with purpose and skill as much as with grace. I watch the birds that are watching me. I miscarried the baby.

Texas has held Miguel and me hostage for years—disguised in the form of “jobs”—and we return to lovely New Mexico for just a while, misfit pilgrims wandering back into our homeland for a summer month. We have returned to our beloved Southwest. We are escaping the pain and memory of our last few weeks in Texas, full of heartbreak, heavy with the weight of loss.

We met the peregrines during our first evening hike at Tres Piedras. I heard their high-pitched cry even before we reached the shadow of the tall bluff. I heard their calls even before I caught sight of them, and I remember feeling suddenly excited, knowing who and what they were simply by the sound. Miguel, on the other hand, remained in unintentional bliss, not recognizing the sound, the call, the warning.

But as we trekked higher on the bluff, the falcons showed themselves, circling in flight, peppered bellies and sharp tapered wings undeniable.

Miguel named the peregrine couple “Perry” and “Darlene,” and he did it so suddenly, so confidently, that I almost laughed. Miguel had never cared much about mountains or birds before we met. Rather, he longed and was drawn toward the ocean, toward the beings that lived beneath the water rather than above. Before we met, Miguel and I were very different people, a beach bum and a drunkard. We met and married. Years passed. Efforts made and efforts lost. 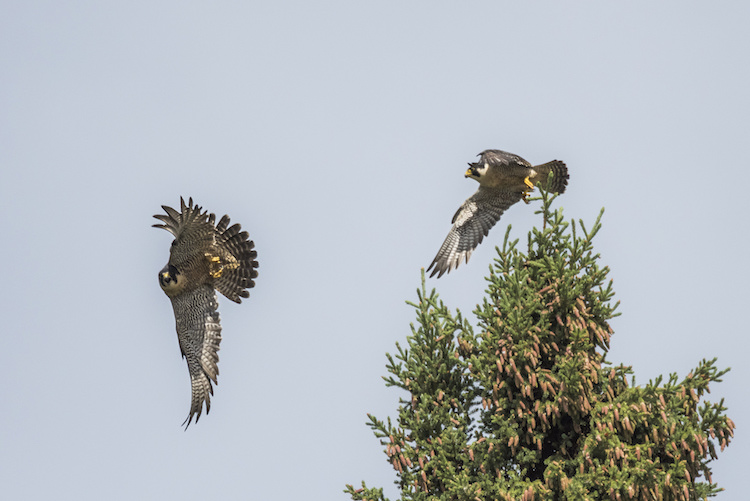 Now We Have Returned to the Mountains

Perry and Darlene are relentless—a high-pitch, repeated trill and then a dive-bomb while the other circles. They guard their nest fervently, and while I am not surprised at their aggression or persistence, it is their fervor that takes me, shakes me, plunges me into a strange meditation that I’d rather forget. I miscarried the baby.

The pair guards their nest hidden somewhere on the high bluff of this New Mexico mountain. Miguel and I strain with binoculars and brimmed hats against the sun to find it, searching for a gathering of sticks. The couple screech and try and distract us with their acrobatic dive-bombing techniques. The birds are protecting their young, their babies. We are tourists in their home, casual hikers, visitors from neighboring Texas. We are pilgrims in our own homeland.

I watch the peregrines that are watching me, knowing we could have been, would have been, as fierce to love as these two parenting peregrines. They guard their nest, their young, their lineage. Miguel and I remain childless, together but alone.

These are the facts: With peregrine falcons each pair maintains a breeding territory and often remain together throughout the year; courtship involves aerial displays and noisy calling; three to four eggs are usually laid; young peregrine falcons fledge at around thirty-five to forty-two days, but depend on the adults for a further few months; the peregrine falcon first breeds at around two years and may live for up to twenty years in the wild.

These are the facts: I miscarried the babies. Plural. The first miscarriage was in summer, the second in spring.

I look over at Miguel, crouched down on the red rock, his summer face fading. He is sad but only in the sense that he does not show it. He is a city boy who watches the birds that I’ve been familiar with for years. He is seeing them for the first time. We are not like these birds; we are different from Perry and Darlene. We do not guard with fervor, we do not live to care for, and guard, and protect. I miscarried the baby.

As we head down from the bluff, I look back up to see the two falcons perched next to each other, and I see only their dark outline against the bright light of afternoon settling into evening. Two fiercely protective and dedicated animals, a pairing. A pairing protecting their young.

Miguel and I are also just two together, dark outlines against the bright light of afternoon settling into evening.

The peregrines haunt me long after we leave New Mexico, headed back east—an uneasy return, from west to east, backwards pilgrims headed to a place we try to call home. The falcons haunt me. With eyes open or closed, I can still see them flying above with wings wide and extended; vigorously defending what is theirs, protecting both their territory and their creations.

It is then that I change my mind. We are like these birds. I realize we are them and they are us. Fiercely protective of the unseen, that which is kept hidden and secret and safe. We keep our sadness to ourselves, tie it tight and burn it daily in the fire that is reality, or what some call a higher power’s will. I miscarried the baby. The baby is gone. We have only our secret sadness now, and even this we keep hidden. This we keep between us like that fierce protecting between the summer peregrines.