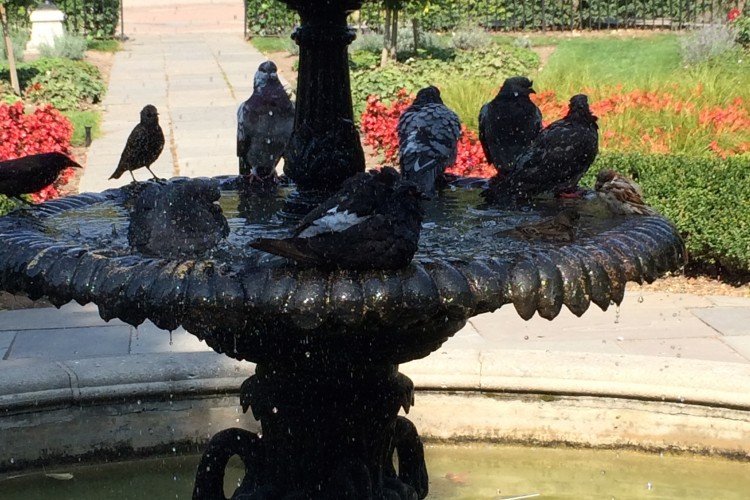 Random acts of bird watching from my first two months as a city creature.

We have pigeons! Only two days here and I have found birds to watch from my 8th floor living room window. My husband says I will tire of them. All city people do, he tells me. 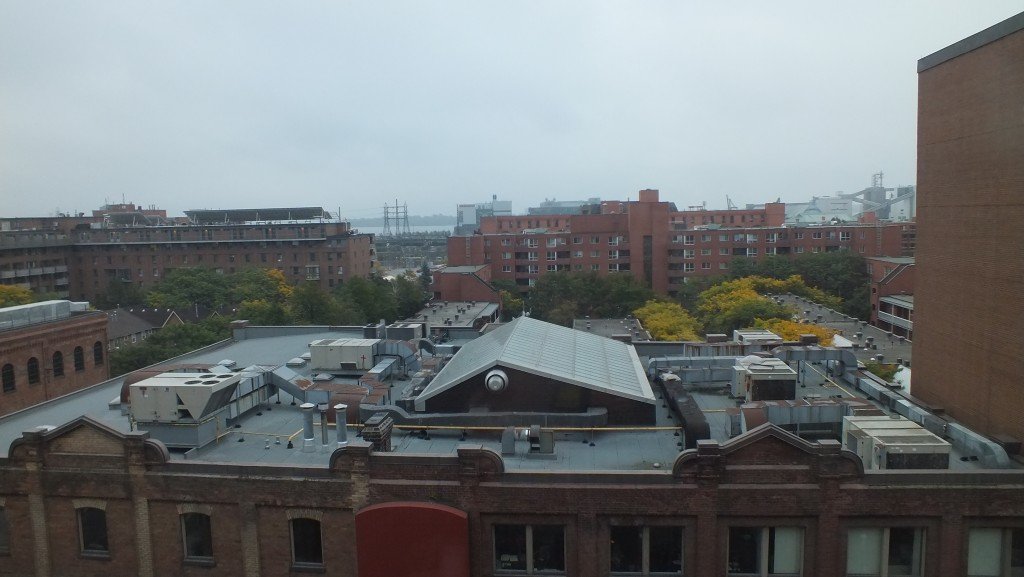 There are about two dozen of them. They spend much of their day below me, on the roof of the four-storey office building across the street. Not one of those lovely gardened rooftops, but an industrial space formed of ducts, pipes, fans, air conditioning units, and the discards of maintenance workers. There is an ever-present puddle of water under one of the air ducts. I christen it Duct Pond.

It seems the birds prefer this sheet-metal environment to the clean gravel apartment rooftops nearby. They sun themselves on the atrium glass, shelter under ducts, nest in an exhaust fan, and bathe in the Duct Pond. 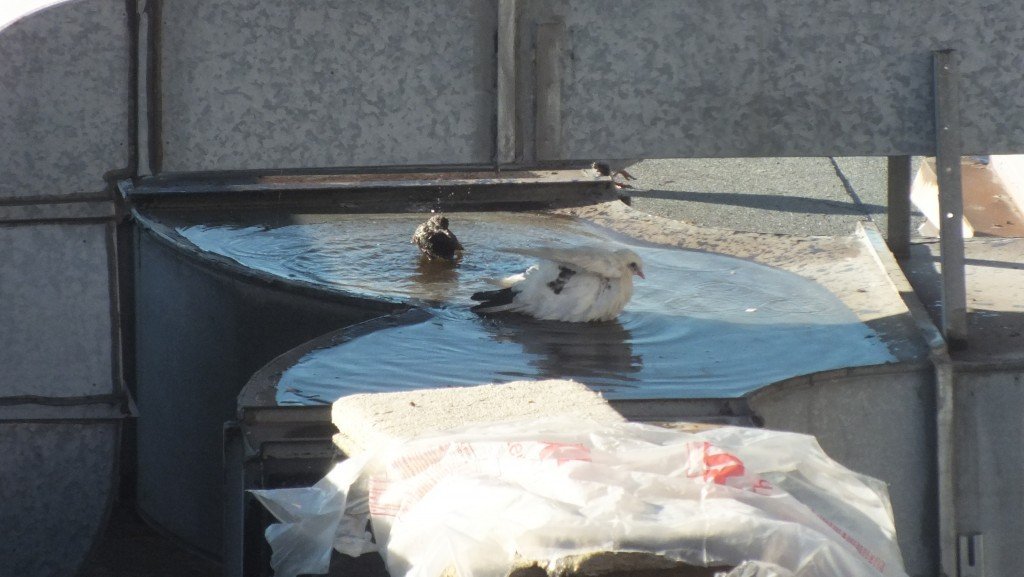 I am at first amused by a white pigeon perched on an a/c unit. She has a downy feather stuck comically to her beak. I pick up my binoculars to take a closer look and realize something isn’t right.

She stands on one rosy leg, but the other dangles uselessly. She swipes her beak along her shoulder to brush off the feather, but it doesn’t budge. She tries again and teeters. She does a sort of flap-hop to regain her balance, and then settles onto her breast, hen-like, on a rusty duct. The feather, still stuck fast, flutters in the light breeze.

Will her injury heal or is this a drawn-out death sentence? How strong are these birds?

During World War I, a U.S. Army Signal Corps carrier pigeon named Cher Ami was gunned down by Germans on her way back to headquarters. (Cher Ami was thought to be a male pigeon until her body was examined upon taxidermy. She is still mislabelled at the National Museum of American History.) But she regained flight and continued on. An hour after her release she arrived at her loft, nearly blind and close to death. She had been shot through the breast but her message capsule, dangling from the remains of her shattered leg, was intact. 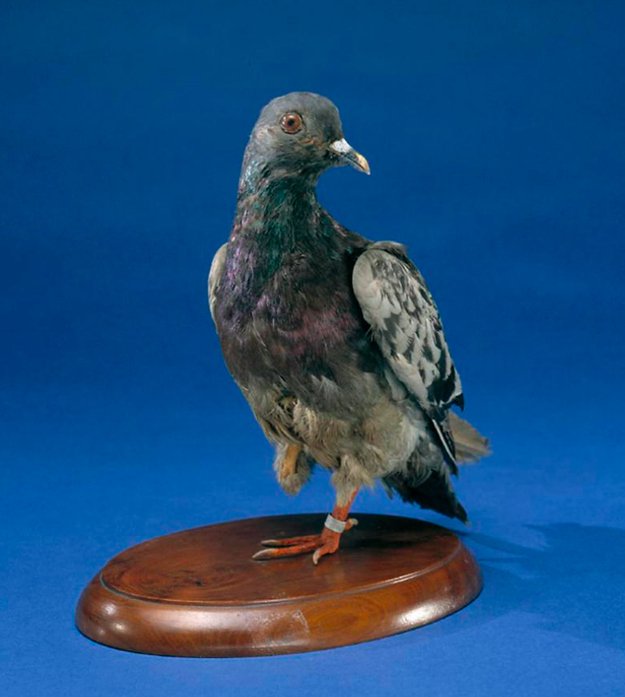 In completing her mission, Cher Ami was credited with saving the lives of nearly two hundred men—a “lost battalion” that had been trapped behind enemy lines. She was honored as a war hero and today her body perches on one leg at the National Museum of American History.

Pigeons, says Tim Birkhead in his book Birdsense, have the ability to recognize each other individually—even in a video.

That’s better than I can do. To me, the grey birds all blend together, so I’m pleased there is one that stands out. The white pigeon is back today, still nursing her leg. She is almost pure white, with irregular black epaulettes that fold neatly together on her back like a Rorschach. Her tail is black with only the narrowest of white margins, giving the illusion, in flight, of a forked tail like that of an Arctic tern. 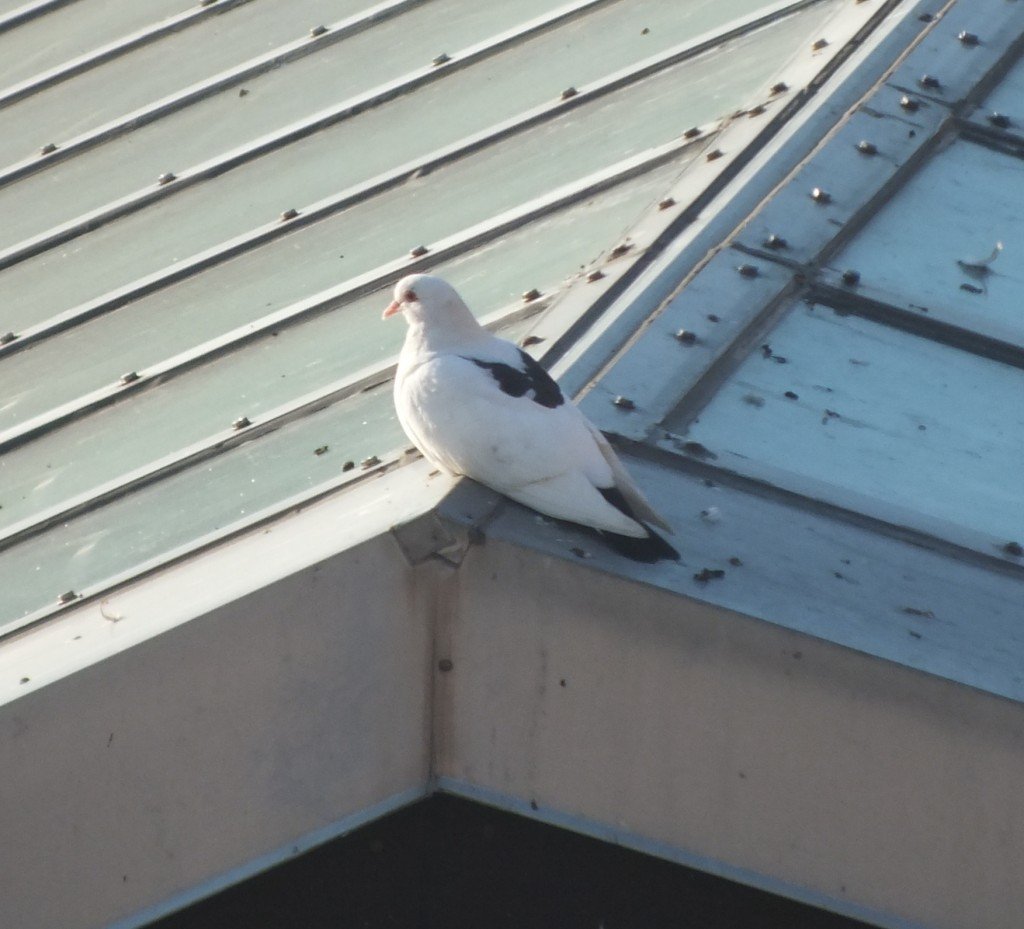 But grey birds prevail, a remnant of their rapid evolution in the soot-coated cities of the Industrial Revolution. In his book, Subirdia, ornithologist and urban ecologist John Marzluff points out that it is no accident that the most common birds in city centers—pigeons, house sparrows, and starlings—are all dark.

During that coal-fired era, he explains, birds that stood out from their dingy environment (and each other) would have been easy prey for raptors, cats and—in the case of pigeons—desperately poor people looking to fill a stew pot. Like the more famous case of the pepper moth, natural selection during these dark times favored dark animals. Even today, most pigeons are the color of roadways, sidewalks, rooftops, and parking lots.

I’m in the park this afternoon when some fifty pigeons lift from the grass in one great flock. Flying directly towards me, they navigate low between the trunks of the maple trees, then part and stream around me so near I can hear their wings pummeling the air. 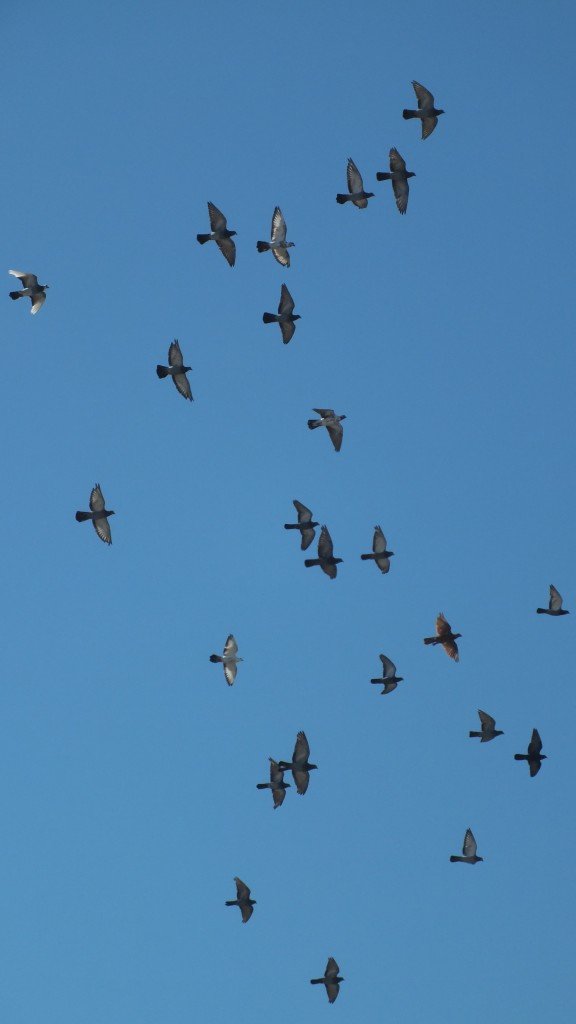 It occurs to me that in the same way that commuter traffic is really a collection of individuals, each person traveling with singular purpose, flocks of pigeons are individual animals acting with intent. Every bird I see is going somewhere, coming from somewhere, and doing so with purpose.

The park pigeons all land at the feet of a man who has just seated himself on a bench. He is just one of dozens of people on benches today. As near as I can tell, he made no move to attract the birds. In fact, I can’t even figure how the birds saw him from the lawn.

They stop for only a few beats, surrounding his feet and cooing enthusiastically. But before I can even raise my camera they are off again. They settle on another patch of grass fifty feet away and resume foraging.

What was that all about?

On June 27, 1997, almost 60,000 racing pigeons—those bred for speed and superior homing instinct—didn’t arrive home. Something went terribly wrong on their five-hundred-mile flight from Nantes, France, across the English Channel, to their lofts in Southern England. Like a flight into the fabled Bermuda Triangle, they just disappeared.

On that same day, someone later pointed out, the Concord Supersonic Transport (SST) also crossed the channel, and in doing so, generated a sonic shock wave that blanketed the earth for one hundred miles. Could that moving wall of pressure have been responsible for the pigeons’ demise?

I think of that today as the Canadian Air Force elite aerobatics team, the Snowbirds, takes to the skies during the Canadian National Exhibition Air Show. As their jets roar over my building in precise formation, the pigeons take off as well. They swirl en masse, wheeling in a large arc over my head. After executing two turns around the building, they settle with a flutter back onto the roof.

The white pigeon is here today, limping, but bearing weight on her leg. She flies to Duct Pond and settles into the water. Perhaps it’s soothing. She doesn’t shift to make room for a pair of sparrows that arrive to take a fluttery bath.

These birds, Marzluff says, don’t just cope with human urbanization, they exploit it. They forage on our golf courses and piazzas, nest in our buildings and monuments, bathe in our fountains, and roost on our statuary. By building cities, we have ensured that adaptive birds like these can thrive in every country on earth. 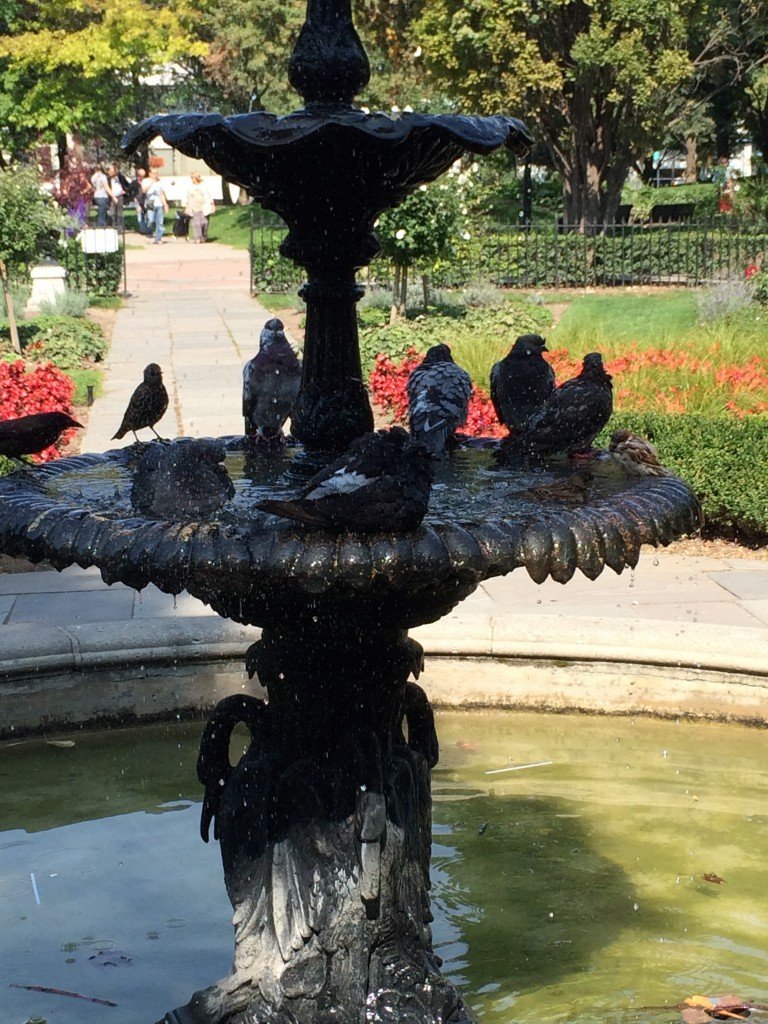 A pigeon has taken possession of the top of a capped chimney. He is the color of bricks speckled in sunlight. This is the third evening he has chased off every pigeon who has dared to make a move on his two-foot square of concrete.

Some pigeons are more equal than others.

That’s the title of a series of pigeon photographs taken in Copenhagen and Venice in 2012. These were not just any pigeons. Swiss artist, Julian Charrière and German artist Julius von Bismarck built a bird trap that gently caught the birds and air brushed them in bright colors. After having their portraits taken, the thirty-five Technicolor birds were released to mingle with their more drab counterparts.

From an artistic perspective, I admit, the birds and the photographs are eye-catching. But from a nature perspective, I don’t know what to think. The birds were not hurt and their unnatural color quickly wore off. No harm, no foul? But must everything be enhanced, super-sized, and shouted in uppercase for us to appreciate it?

Today is the autumnal equinox. The pigeons seem to be coming to the rooftop less often. Is it the cool rainy weather? The shortening of days? Where do they go in winter? Will they join the million-bird flight that funnels between Lake Ontario and Lake Erie every fall? Will they settle in some southern city until spring? Or will Toronto’s artificial warmth and preponderance of food keep them here through winter?

I hope they stay. If they leave, what will I watch?