Few things capture the romantic imagination like the great cities of the world. In New York, I find my­self transported on a stroll through Central Park by the tune of a saxophone. This is what it means to be a New Yorker, I think to myself with pride, as I sit down on the Great Lawn with my Sunday crossword. But the imagination—a lovely device at times—can obscure truth. 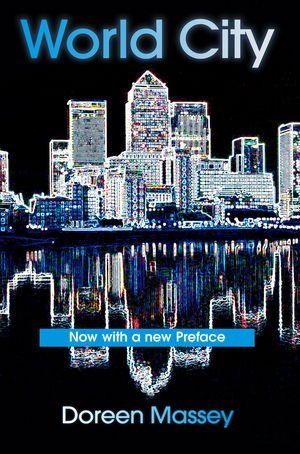 In her book World City, Doreen Massey is a cre­ative debunker of geographical imaginaries, and her subject is London. Former London Mayor Ken Living­stone once sang London’s praises as a “world city” to which immigrants come from all over, allegedly in or­der to enjoy the freedoms the city has to offer. Massey points out how this conception involves multiple im­plicit assumptions. For example, it seems to refer to a place outside history, so that London is a distinct something that pre-exists the immigration it attracts; and it assumes that the immigration is fully voluntary and positive, as if London’s economic and cultural influence does not negatively affect other regions, so that many immigrants have little choice but to move to cities like London that dislodge and dislocate as much as they attract. Livingstone assumes that London is actually successful, but the very criteria of success are debatable because they rest on assumptions such as these.

Massey argues that challenging these assumptions is both necessary and exigent. We must uncover and re-think our geographical conception of London, as well as our conceptions of all world cities as they ex­ist today, because these imaginaries prevent us from building a just world. By uncovering and rethinking our geographical imaginaries, we can begin to over­come the vast inequalities present within our global cities and between those cities and other parts of the world. With more people now living in cities than not, in a world where vast inequalities have set off global Occupy protests, Massey’s book is urgently relevant today.

As we ask ourselves, “What does it mean to be of this place?” or “What does this place stand for?” we have to also ask, “What are our responsibilities as members of this place?” These are not new questions, but in our globalized world, they need new answers. As the in­fluence of global cities reaches far and wide, what it means to be of a place and our resulting responsibili­ties also begin to extend beyond traditional borders.

World cities not only include the territorial space of the city limits as it has been historically defined. We must also consider how the city interacts with other places that we might normally think of as separate. “In considering the politics and practices, and the very character, of this place, it is necessary to follow also the lines of its engagement elsewhere” (p. 13). Massey hopes to create a “politics of place beyond place” (p. 15) that is both “territorially grounded” and yet “re­sponsive to a relational space” (p. 156). Then, in ex­tending the geographical imaginary of a place, we also extend the reach of our responsibilities.

Massey has written about her global conception of place in previous works, although not as extensively as in World City, where she details her theory. For ex­ample, she specifies that we should be careful not to “blame the victim.” Blaming the victim would be, for example, when regions of the United Kingdom outside London are blamed for their own failures, when those shortcomings might be the result of specific policies that benefit London. At the same time, Massey investi­gates what she sees as a dangerous trend of fetishizing the local.

Massey also focuses more in this work on the specific case of London. She uses the London case to show how rethinking the geographical imaginary of a place might look in terms of actual policy decisions. Her stated goals include not only “expos[ing] the he­gemonic geographical imaginations” but also “tak[ing] the further step of proposing alternatives” (p. 24). Massey has succeeded in accomplishing this task for London. But we all now must relate these notions to our own places of residence. As one who lives in New York City, I wonder how we might apply Massey’s world city theory to it? In other words: what does it mean to be a New Yorker? What are our responsibili­ties as New Yorkers?

Taking on a study similar to Massey’s to answer these questions for New York would require extensive research. I am no expert on the geographical assump­tions of New York politics, though I believe this would be a valuable undertaking. What is clear is that many of New York’s problems also seem to come back to geographic assumptions—on issues such as eminent domain or gentrification, for example.

World City is also valuable to New Yorkers and other non-Londoners because it reminds us of how important conceptions of place and its meaning are to our politics, a fact often forgotten. This fall I spent time protesting with Occupy Wall Street in Lower Manhattan. I remember attending a talk at Zuccotti Park where a dozen of us or so argued for hours about how our political system could possibly handle the ecological crisis. We were only a few small individuals, flanked by the tall buildings of Lower Manhattan, but I felt endowed with a power and a need to raise my voice loud for politics. I think there was something about the park, about having a place, which contributed to this strength and confidence.

It was through OWS that I first came across Do­reen Massey, as well. Massey was among the speak­ers at St. Paul’s Cathedral as part of Occupy London’s Free University. This seems a fitting association to me, as the Occupy movement also works to reclaim places from hegemonic actors, creating a politics that is both grounded and yet connected to a global web. There is a certain beauty to the thought of Massey presenting her ideas in the context of this movement, to think of her words floating up into the highest chambers of St. Paul’s Cathedral.

Unfortunately, the speech Massey gave at Occupy London was not recorded. However, I recommend World City, to all those concerned with global inequal­ity and the future of an ethics of place.