“When you give yourself to places, they give you yourself back; the more one comes to know them, the more one seeds them with the invisible crop of memories and associations that will be waiting for you when you come back.”  ~Rebecca Solnit, Wanderlust

Why do I walk? As I press my toes against the edges of that question, I realize that I haven’t always been a walker. I grew up in the car-almighty suburbs, where one had to get behind the wheel to get anything. I enjoyed hiking, inhaling deep draughts of fresh air, but these long-distance jaunts were special occasions reserved for visits to National Parks or scenic lakesides. Walking only became an imperative for me—a primary mode of transport, contemplation, and enjoyment—when I moved to Chicago.

Since then, I’ve rambled many miles throughout the city. With the assistance of Liam Heneghan—a fellow urban peripatetic—I recently co-organized a group that meets monthly to explore the nature of the city on foot. I’m enthusiastic about the group walks, but my solo walks generate broader satisfactions. When I walk with someone else, I usually learn a lot about the person. It is a fact that Liam and I have nurtured our friendship by feeding it miles. When I walk without a human companion, however, I more easily socialize with the world.

This past weekend, I hiked a newly constructed trail that skims the southern outskirts of Chicago for twenty-six miles. Time prevented me from attempting the entire length, and on this day I wasn’t interested in covering as much ground as possible. I just wanted a peek, to see the city from a different vantage point. And now I’ve got several good reasons to return.

The Cal-Sag Trail is a paved path, and the day was the warmest day of spring we’ve had yet, so cyclists had reason to dust off their spandex and slap on their shiny helmets for a ride. There were fifty of them for every person on foot I passed. “On your left,” someone would yell, and a few seconds later whoosh. At one point along the trail, when I was deep in my own thoughts, a sudden “on your left” startled me into a karate-like defense pose. I’m certain I looked like a complete doofus. Farther along, yet another “on your left” caused me to fire back “on your right.”

I don’t begrudge cyclists their time in the sun. All of the wheels whizzing by me, though, prompted considerations of the differences between walking and cycling—how the pace of the latter is more suited to where you are going than it is attuned to where you are. I’ve recently been rereading Rebecca Solnit’s book Wanderlust, a wide-ranging treatment of the history, philosophy, and reasons for walking. She writes eloquently about the pace of walking, an “intentional act closest to the unwilled rhythms of the body, to breathing and the beating of the heart.” Footfalls create a comfortable pulse that engages the body with its surroundings without overwhelming the mind with input. Thoughts can breathe. Walking is a procession that allows one to process.

In a city that prioritizes getting from point A to point B in the quickest and most efficient manner, walking can be dismissed as an oddity or a hindrance. I recall one of the first big snows I experienced in Chicago. Walking to the elevated train in the early morning, I struggled over massive white hills of winter slush on the sidewalks. The streets had been plowed to pavement, the snow shoved out of the way and onto the already deep accumulations atop the footpaths. A clear demonstration of what modes of transportation the city favors to keep business humming.

When our feet touch down, possibilities arise for new and needed ways of knowing that further knit the landscape together. In an essay entitled “Good, Wild, Sacred,” backcountry animist and beat poet Gary Snyder shares a story about time he spent with aboriginal peoples during an extended visit to the central Australian desert in the early 1980s. He writes about the sacred songs and stories of that vast landscape, of how mythology, prominent natural features, and practical travel information are braided together.

In one scene, he and a Pintubi elder named Jimmy Tjungurrayi are traveling across a dirt track by truck, and Jimmy is pointing out important landmarks, telling of their significance to his people, the animals they are associated with, and the elaborate mythologies embedded in them. Snyder notices that his companion is speaking more and more rapidly, so fast that Snyder can no longer keep up with the rich and complicated stories he is being told. It is then that Snyder understands that these stories, among their many functions, are also maps for a journey on foot. “I realized after about half an hour of this that these were tales to be told while walking, and that I was experiencing a speeded-up version of what might be leisurely told over several days of foot travel.” Barreling across the desert by truck, the pace had exceeded the stories’ ability to be told or clearly heard.

As Solnit phrases it, the “apotheosis of speed,” especially in the city, makes walking “a subversive detour.” A detour, I think, that is worth taking; an act, I think, that will impact the future of what we demand of cities; an outreach, I think, that can connect us to a multispecies community. When we treat a landscape as empty space between a starting and ending point, we simply cannot know what a place has to offer and what we might exchange with one another. There is beauty to be discovered in embracing the inefficiency of the not-so-straight line. Walking “allows you to find what you don’t know you are looking for,” Solnit observes, “and you don’t know a place until it surprises you.” You put your body out there, and see what turns up. 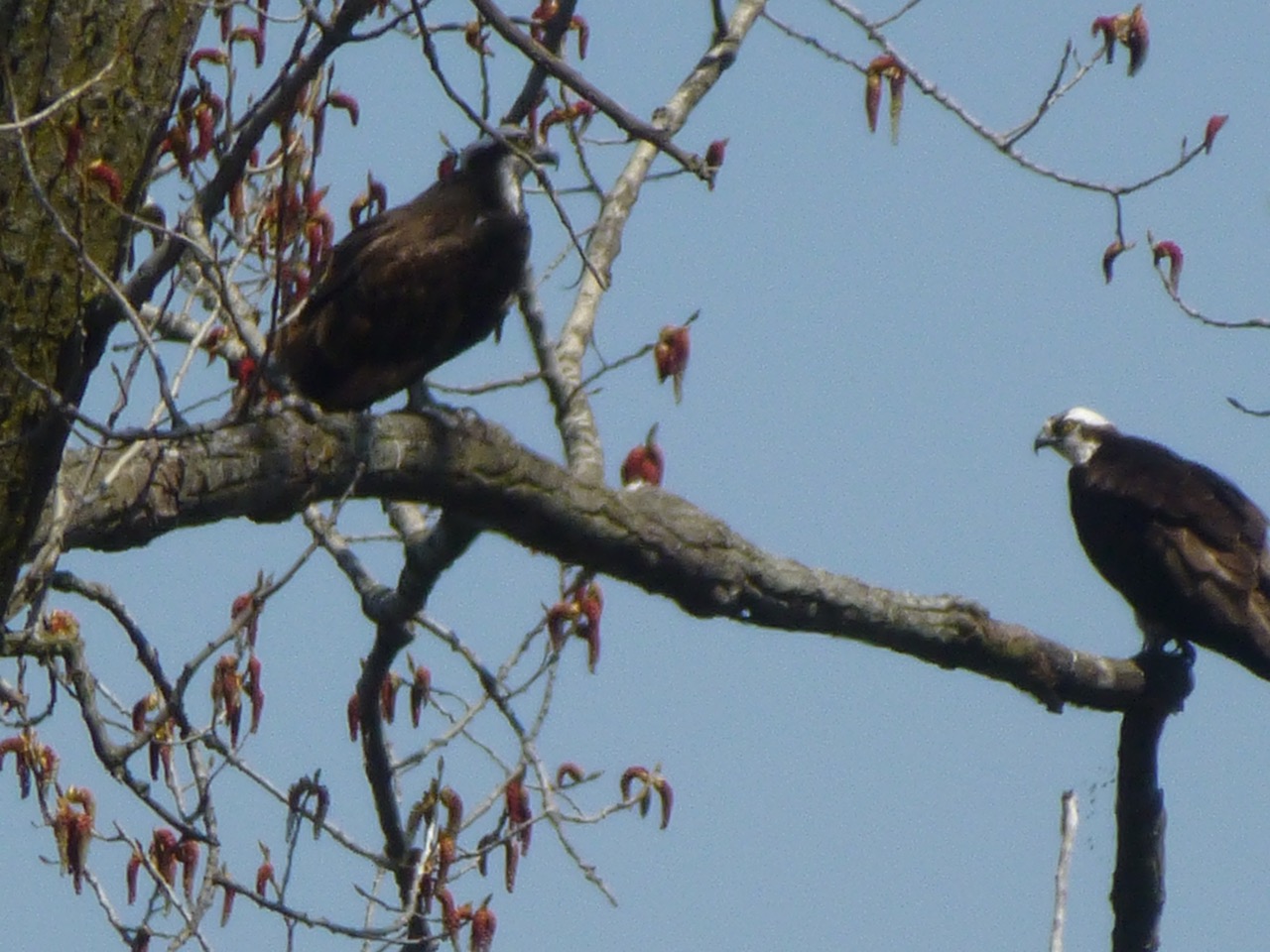 Like the osprey pair I encountered on the Cal-Sag Trail. Ospreys are impressive raptors known as “fish-hawks” for their pescatarian diets. In their talons, they carry a fish with the head pointed forward to eliminate wind resistance. They are a rare state-threatened species with only a handful of nests in Illinois. So, when I looked toward a thin strip of trees overhanging the lazy waters of the Calumet Sag Channel and spotted not one but two osprey, facing one another on a branch, an involuntary yet entirely justified expletive escaped my lips. I absorbed the sight—the white head with the distinctive dark stripe that crosses over a sunburst eye, the vulture-like hunch of the more than two-foot-tall body, the hooked beak that terminates in a needle designed to pierce flesh. Across the channel, I could see a jumble of sticks forming a large circular nest. A home for the next generation of ospreys, high on a wooden pole, on the edge of Chicago. 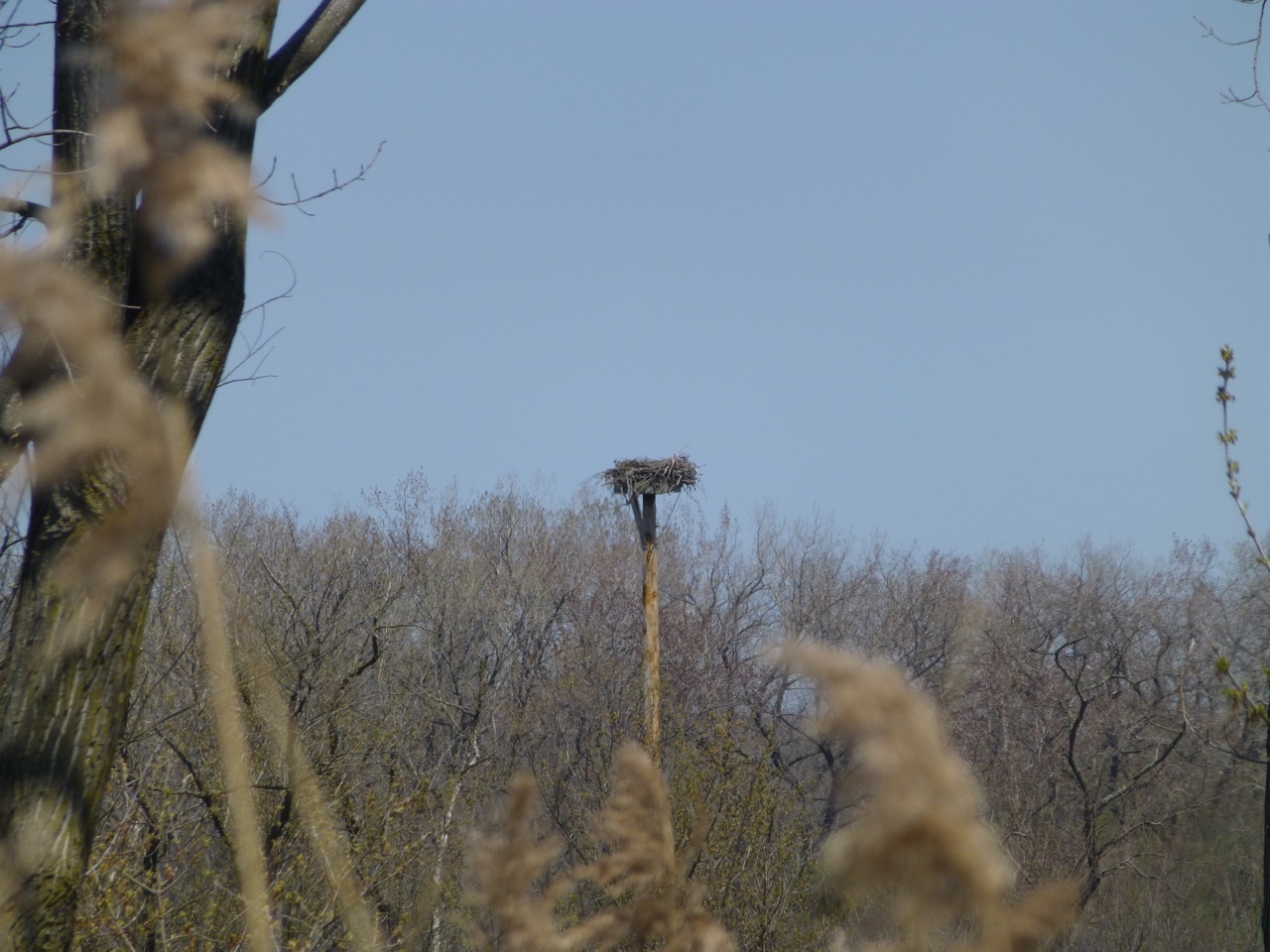 Whoosh. A woman zips by me on her bicycle, slowing slightly. “Is that a bald eagle?” she calls over her shoulder, the Doppler effect already diminishing her question. “Osprey!” I reply. I suspect she doesn’t hear me. She is already too far away.

A path like the Cal-Sag Trail forms part of a larger corridor, a threaded dyad of blue and green that passes like a stitch through the city’s fabric. The defined edges of the Cal-Sag—the Channel on one side; a roadway, with trees muffling the sounds of distant automobiles on the other—evokes the sense of a curving passageway through the built environment. A corridor of and for life. 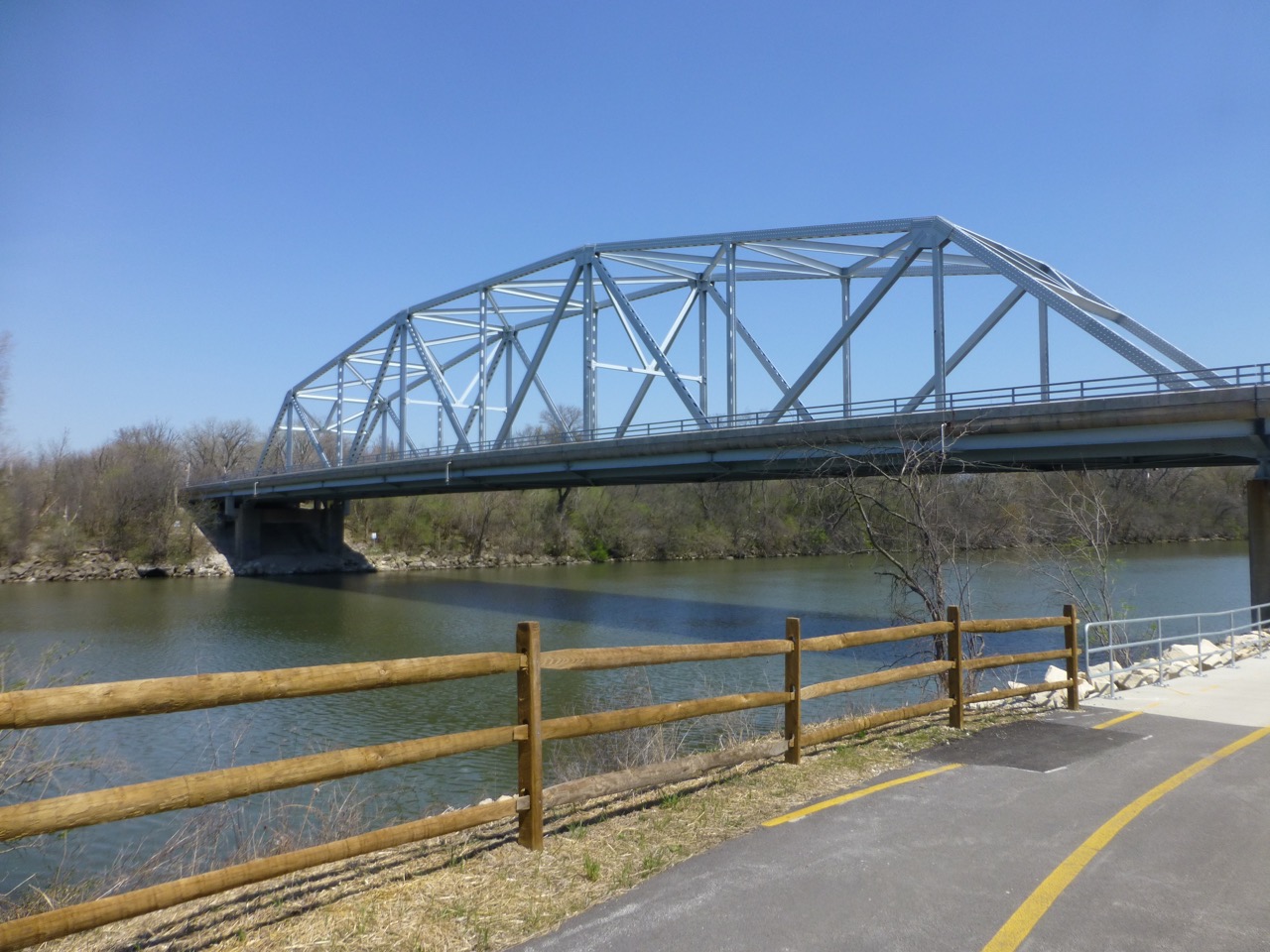 Conservation biologists sometimes speak of the factors that contribute to a landscape’s ecological viability as “the 3 Cs”: (large) carnivores, cores, and corridors. Large carnivores because of top-down prey regulation, which buffers the vegetation from the appetites of herbivores. Cores because lots of space and adjacent habitats can support more species, some of whom need large amounts of unfragmented land to survive. Corridors because these are the arteries that keep the land’s lifeblood flowing. Corridors provide safe passage—around, under, or over paved roads. Corridors offer escape routes and lifelines between populations of species that would otherwise be genetically isolated.

I wanted to continue walking this city corridor, but the time came to reverse direction. I had an appointment to keep. On the way back, the trail stayed superficially the same but new experiences altered its composition. One in particular stands out. Or flew out, rather. The band of trees on my left ejected a feathered blur across my path at eye-level. Dangling from the talons of this now-ascending blur was three feet of snake. I arched my neck and fumbled for my camera, hoping I could get a clear photograph, some proof that this was really happening. The red-shouldered hawk traced spirals in the air, crescents of translucent white shining through her wings, rising farther and farther into the robin’s egg blue of the sky. It was impossible to tell if the snake was dead and swaying in the wind or very much alive and writhing against the forced trip away from the ground. The hawk receded, circling toward a hill on the other side of the channel, and then plummeted behind it. In a matter of seconds, the pair was out of sight. Only then did I realize that my mouth had been open the entire time. 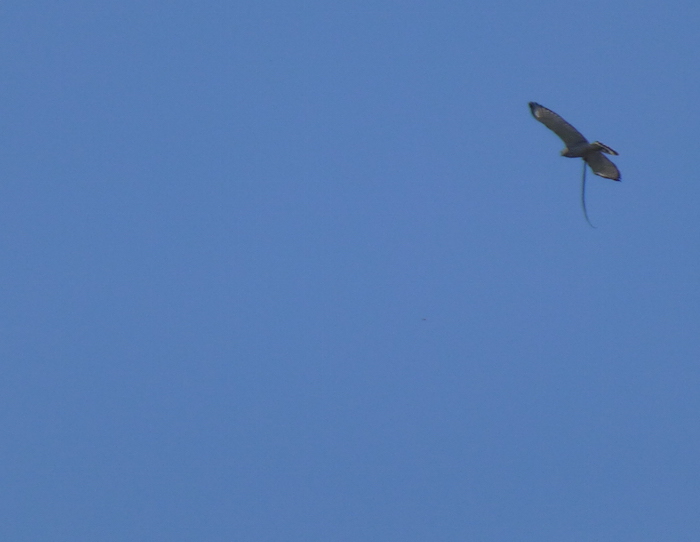 These trails, these corridors, are significant to other animals. But as I put one foot in front of the other, it also occurred to me that trails such as these have significantly shaped how I’ve come to know the city as a living place. I sometimes imagine each footfall as a needle, me leaving a trail of stitches behind, threads of memories like the hawk with the snake in its talons. Every walk threads me further into the land, joins my body’s memories to the ground. Solnit writes that “walking is a mode of making the world as well as being in it … of knowing the world through the body and the body through the world.” There is a call and response between body and landscape, which is just another way of saying between a body and the multiple other bodies that comprise a landscape. A body in place. A place in a body.

I wonder if the pace of a city and transportable maps conspire together: determining what we look for, universalizing the experiences we are expected to have, constraining our vision of what a city is, what nature is, where each is allowed to be. Had I not been traveling by foot, I never would have seen the red-shouldered hawk with the snake in its talons, or the osprey pair, the tree swallows, the dragonflies, the great blue herons, the coyote scat, the rabbits, the northern shovelevers, the American coots, and the red admiral butterflies. 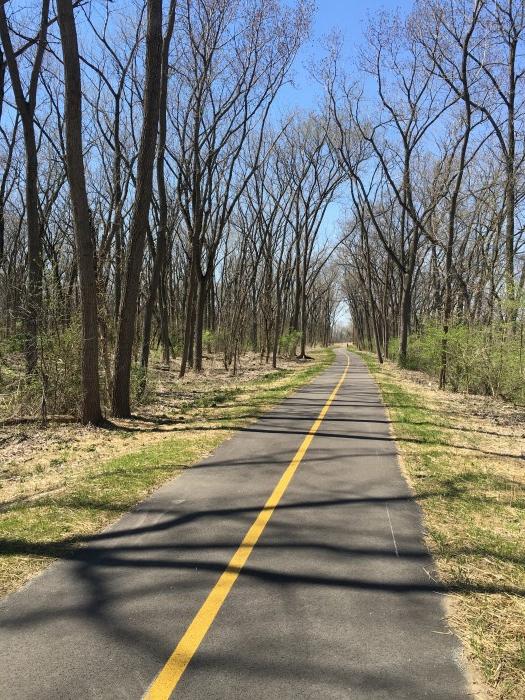 Near the end of Snyder’s essay, he writes:

The best purpose of [wilderness] studies and hikes is to be able to come back to the lowlands and see all the land about us, agricultural, suburban, urban, as part of the same territory—never totally ruined, never completely unnatural. It can be restored, and humans could live in considerable numbers on much of it. Great Brown Bear is walking with us, Salmon swimming upstream with us, as we stroll a city street.

I plan to walk the full length of the Cal-Sag Trail. Then, walk it again. The memories will be waiting for me when I come back. My feet will add further stitches to the fabric of the city. Weaving me into this place; weaving this place into me.