Rangitoto Island: The Resilience of Nature 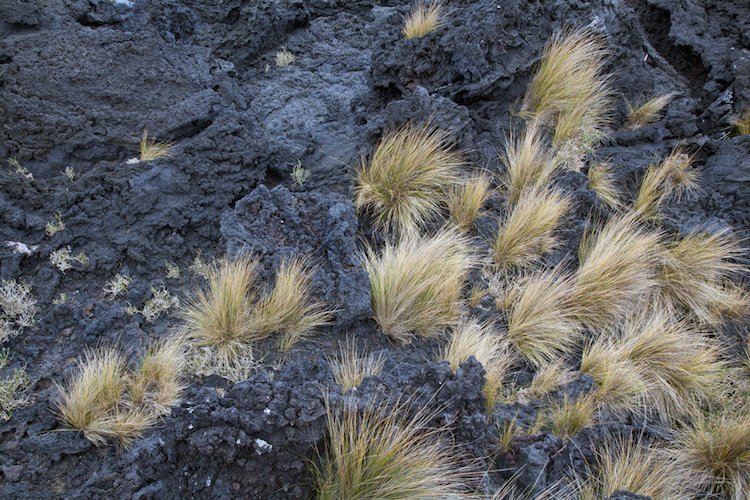 The low, wide mass of the volcanic island rises with uncanny symmetry from the choppy gray-green waters of Hauraki Gulf, its profile of olive-toned foliage unbroken by any hint of human presence. To my willing imagination it evokes archetypal cinematic jungle islands—hints of Moreau, King Kong, Jurassic Park—and I am eager to reach it and explore.

I had only two days in Auckland, New Zealand’s largest city and, as is my habit, I wanted to experience as authentic an urban wilderness as possible. I’d turned to local sources for advice about potential locations. Rangitoto Island was the singular, universal recommendation.

I had no inkling I would discover a place so primordial that it would challenge my deep-rooted notions of wilderness. 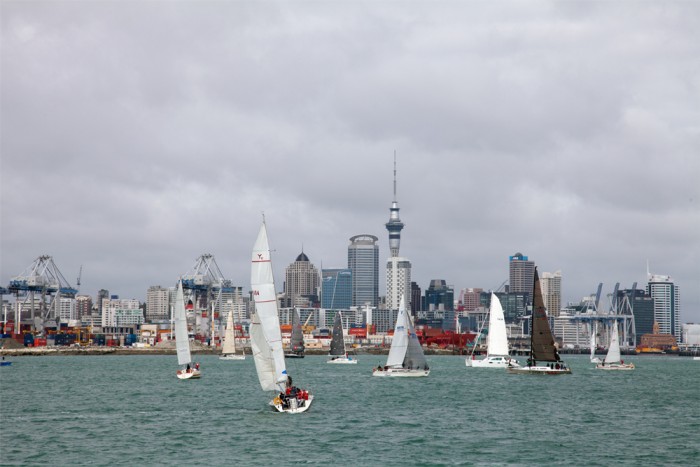 The gleaming towers of Auckland’s skyline quickly diminish behind us, along with several enormous container ships, innumerable sailboats and other pleasure craft. Our ferry leaves Waitematā Harbor—and civilization—behind. The catamaran’s twin bows slice smoothly through the heavier surf of the gulf. After a short cruise, a dozen or so passengers are delivered to the island’s ferry terminal, a bare concrete wharf.

As we prepare to disembark, a crackling mechanical voice ominously blares from the loudspeakers: “The last return ferry will leave promptly at 3:30. If you miss it, you will have a very long, cold night on Rangitoto Island.” As if to drive home the warning, brisk gusts of salty spray strafe the wharf as we approach the shore. I button up my jacket.

We are greeted by the sharply beaked carving of a kaka (parrot), flanked by stylized visages of Tangaroa, the god of the sea, and Tāne Mahuta, god of the forest. In 2014 the Conservation Ministry commissioned this waharoa, or traditional gateway, dedicated to Peretu, the spiritual ancestor of Rangitoto. Beyond welcoming visitors to the island, the waharoa recognizes Maori cultural heritage and symbolizes a pact of co-governance of the island sanctuary. (Imagine the U. S. National Park Service agreeing to co-govern Great Smoky National Park with the Cherokee Nation.) 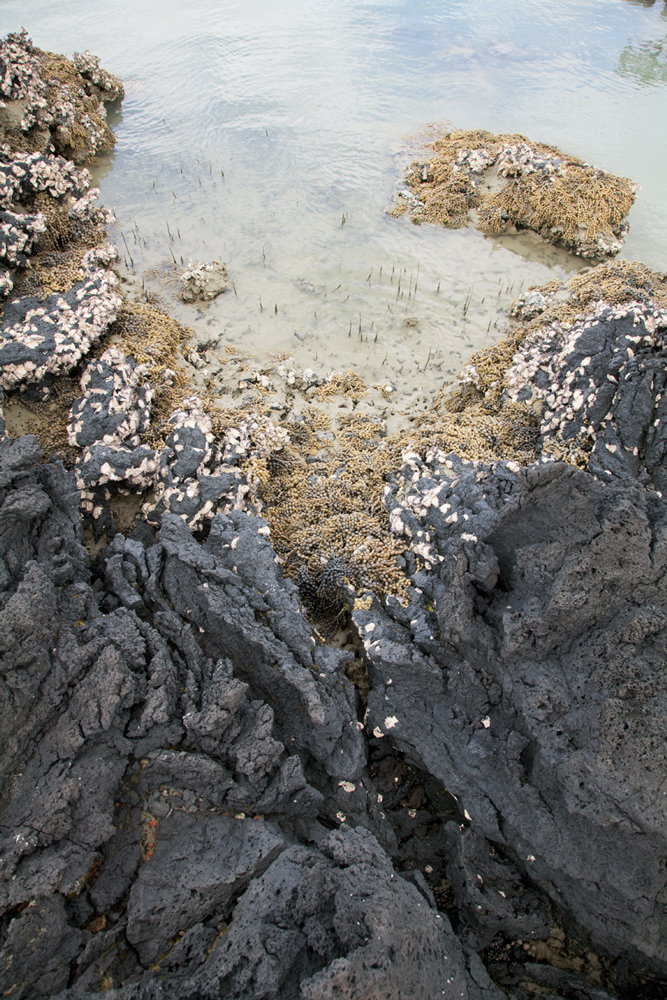 The small crowd quickly disperses. I walk along the shore path, marveling at swirls of lava that reach straight into the clear water. Though encrusted at the tide line with shells and seaweed, the exposed rock appears perfectly fresh, as if its molten flow may have solidified moments ago. Rangitoto is in fact the newest among 48 volcanoes that make up the Auckland volcanic field, having emerged from the sea a mere 6,000 years ago—though it hasn’t erupted for the last 550 years.* 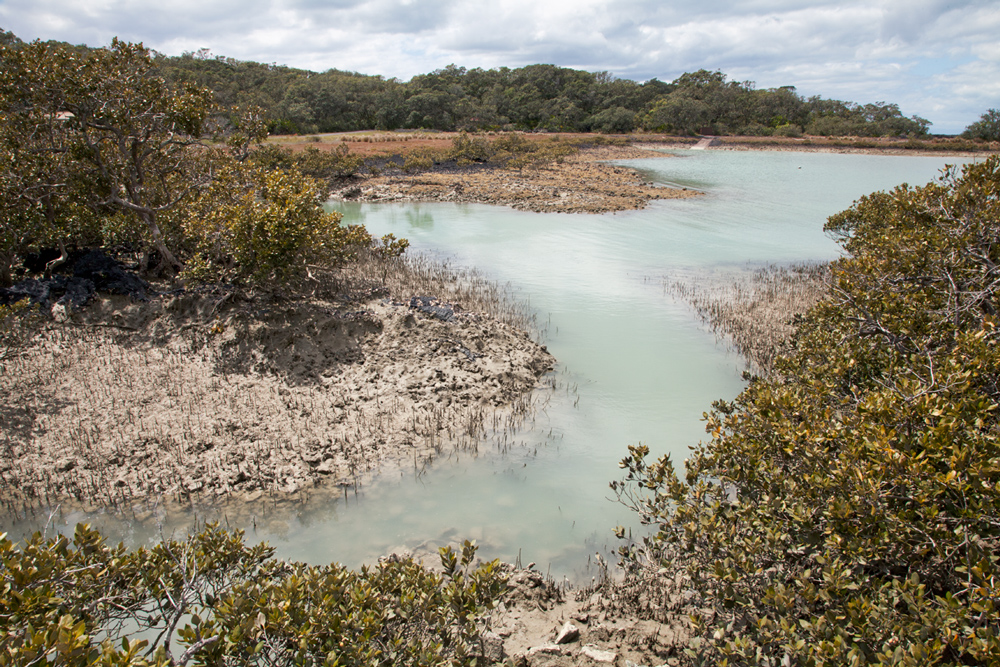 Mangroves have gained a foothold along sections of the rocky coast. After a brief detour on a boardwalk through a mangrove thicket, I head uphill on the aptly named Summit Trail. Said summit is visible at what appears to be a great distance. Cumulous clouds boil over it. The feeling of entering a primeval jungle returns as impenetrable tangles of tree limbs and brush crowd the narrow path. 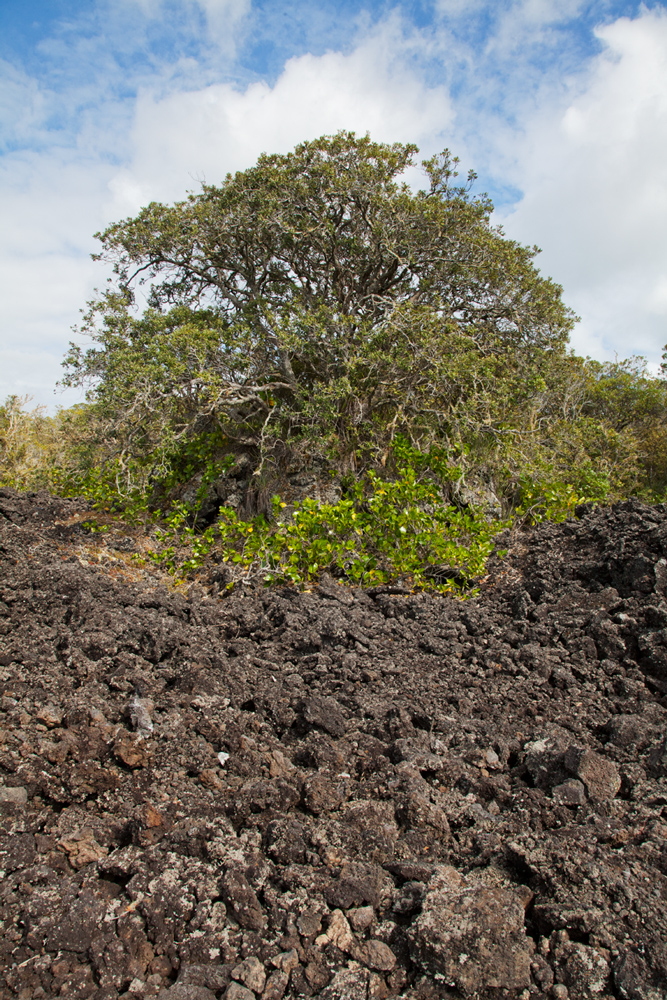 Periodically, the dense forest opens onto barren and forbidding fields of loose volcanic scoria. Blackened, basaltic lava, unstable and abrasive, is strewn everywhere in jagged chunks, like clinkers spewed from a fiery forge. A few tentative steps out onto it—seeking a vantage point for a photo—cures me of the impulse. That anything at all can grow from such a desolate wasteland seems miraculous. Then I plunge into the next patch of jungle. 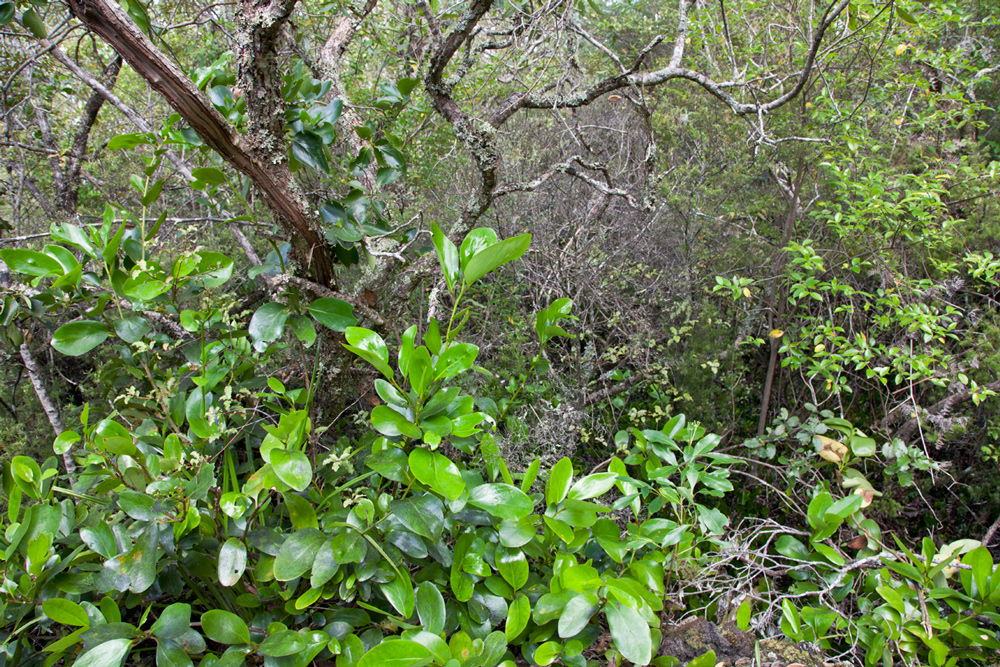 Technically, this isn’t a jungle, since I’m not in the tropics. I am surrounded, however, by a profusion of, to me, alien and vaguely threatening trees and shrubbery. Locals likely would find it comfortingly familiar. Rangitoto, which receives over 100,000 visitors a year, is cherished as a “pest-free” wildlife sanctuary where native species can flourish. 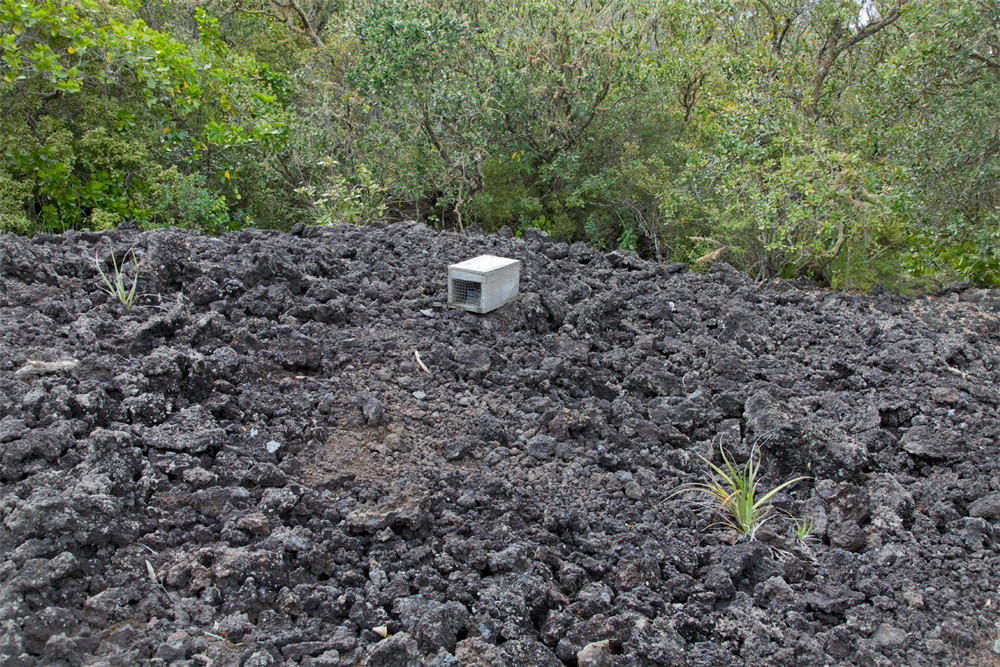 Numerous conspicuous traps indicate both the fragility of the “pest-free” designation and the vigilance required to maintain it.

The island is home to the world’s largest forest of pohutukawa trees, an iconic New Zealand species whose tufts of crimson blossoms have lent it the nickname “Antipodean holly.” Although it is spring here in the Antipodes, sadly, I won’t be seeing any of the unusual flowers, which bloom later in the season. Its abundance on Rangitoto can be attributed to the pristine quality of the island and to the pohutukawa’s ability to survive in exactly these rocky, otherwise inhospitable conditions.

The trail steepens. The clouds part; sun blazes onto black, burnt earth. I remove my jacket, slow my pace, guzzle water from a bottle that suddenly seems too small. The summit, though closer, appears far higher than before.

I catch myself reconsidering “urban wilderness,” the trope I’ve so carefully honed over the years. Here on Rangitoto I am betrayed by my casually generous interpretation. When our species was young there was no wilderness. The world was simply where we lived, where we learned to survive. Later, when we settled in cities, wilderness became something “other”—and fearsome. Here I find that wilderness: a rupture in the civilized world. This place would be wholly uninviting, possibly lethal, had not convict labor a century ago pummeled lava into a manageable path for day-trippers like me.

Rangitoto was born in violence.

A Maori story tells of the tupua, children of the fire gods Auahitūroa and Mahuika, who quarreled and cursed Mahuika. As punishment, Mahuika enlisted Mataoho, the god of earthquakes and volcanoes, who destroyed their mountain home and raised Rangitoto from the sea.

When mist surrounds the island, it is said to be the tears of the tupua weeping over their lost home. 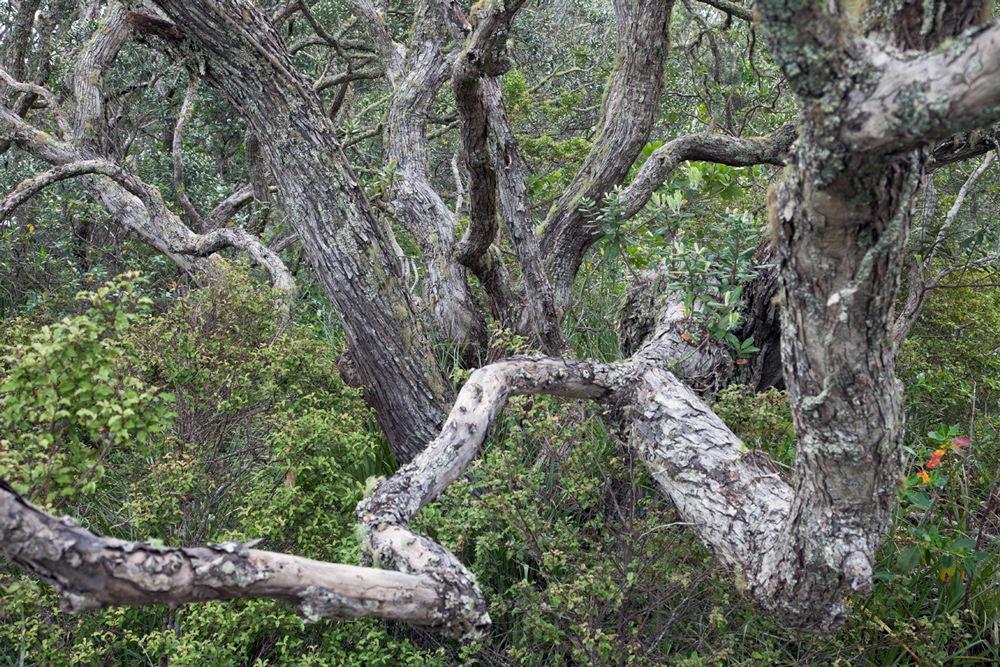 And what about us? We have cast away the old gods, consigned them to quaint totems. We believe in science: volcanology and plate tectonics. We believe—or willfully choose not to believe—in global warming. Are we faring better than children who quarrel and curse their mother?

As I climb the ever-steeper but now deeply forested trail I imagine the tupua wandering the brutal terrain before anything had sprouted from the sulphurous ground. Just below the summit a boardwalk has been built overlooking the dormant crater. The canopy in the completely forested bowl looks lush and benign. 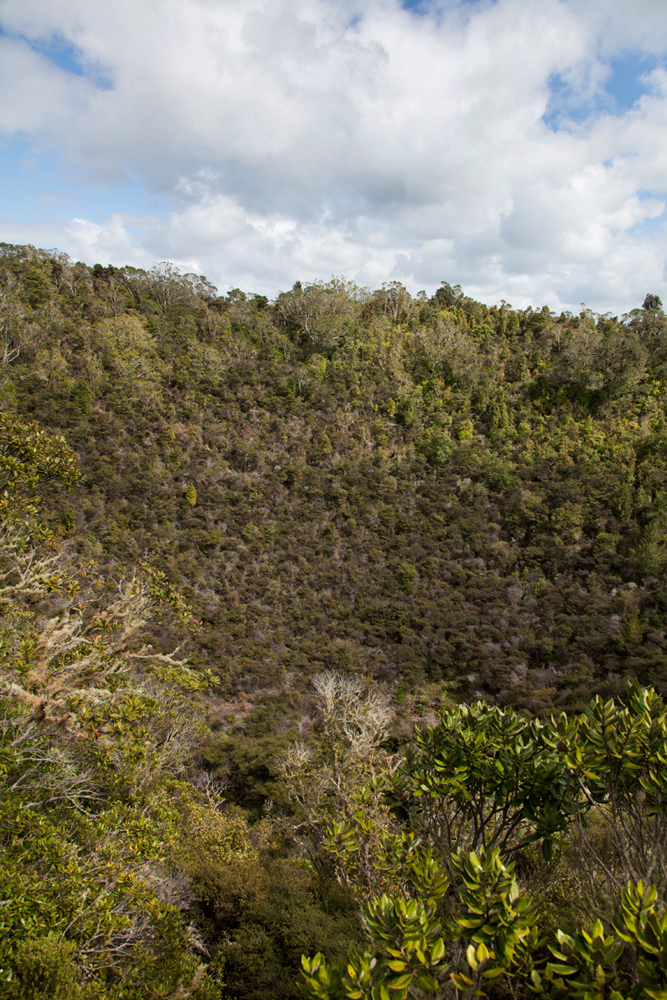 This is how the Earth renews itself. Like the volcano, the Earth was born in violence. Whether our species is responsible for climate change or not, ultimately it is we, not the Earth at large, that will suffer the consequences.

Wooden steps lead me to the summit where another raised boardwalk provides panoramic views of the entire island, surrounding gulf, and distant mainland. From here, the thickly forested island looks like a hoop skirt splayed out upon the surface of the water, decorated in radiating patterns of green forest canopy and black fingers of exposed lava. Again I am struck by the complete absence of any noticeable trappings of civilization—no roads, rooftops, power lines, towers; nothing that suggests we humans have been here at all. 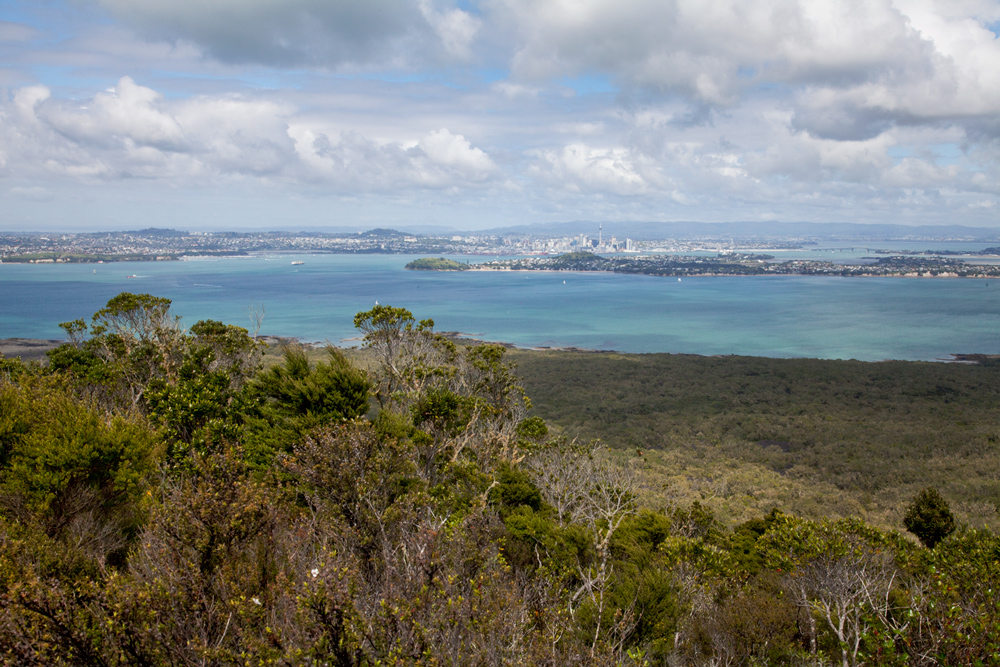 Except, of course, here I am. On a boardwalk built for my recreation and comfort at the crown of this wondrous, immaculate, and hostile landscape. And there, across the sun-dappled waters of the gulf, are the skyscrapers and sprawling environs of Auckland. Sunlight streaming through intermittent clouds briefly spotlights the sparkling white city before it falls again into shadow.

Rangitoto… and Kilauea, Cotopaxi, Mount St. Helens, Pinatubo, Krakatoa and Eyjafjallajokull. And, of course, Vesuvius. No argument is more convincing. Though it might take thousands of years, the Earth will heal. I swallow the last of my water and take a final turn to admire the 360° view of Rangitoto, a serene, pest-free sanctuary.

How would it shape our awareness, I wonder, if every city had a volcano on its doorstep? Taking leave of the summit, I descend the steps; I plunge back into the misty pohutukawa forest.

*Sources vary regarding the date of first eruption. Some give 6,000 years while others drop a zero, making it only 600. There seems to be no dispute, however, that the last eruption was no later than 550 years ago.

All photographs are by the author. To see more photos from New Zealand, go to Eddee’s flickr album.

Univ. of Pittsburgh Dept. of Geology and Planetary Science