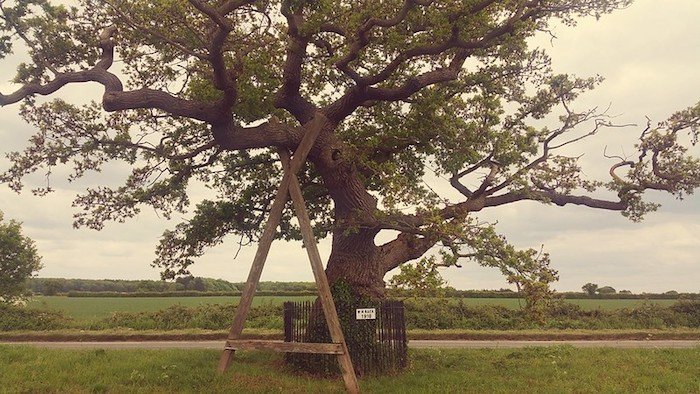 In July 1549, Robert Kett, a relatively well-off English gentleman farmer, led a march of nearly sixteen thousand people from the small market town of Wymondham, Norfolk, to the city of Norwich to resist the practice of land enclosure. Enclosure, forwarded by England’s nobility and wealthy landowners, was the process of fencing in public grazing areas—known as the commons—in order to increase one’s own private landholdings and income. It was condemned over several centuries as a thinly veiled form of theft, but its use grew, nevertheless. Robert Kett’s resistance wasn’t the first that sought to combat enclosure, but it came at a time when the practice was increasing, and it led to a full-blown rebellion, sparking like-minded revolts all across the region of East Anglia. The rebellion was eventually suppressed in bloody battles headed by the Earl of Warwick. Kett himself was tried for treason, hung from the walls of Norwich Castle, and allowed to die slowly of starvation. 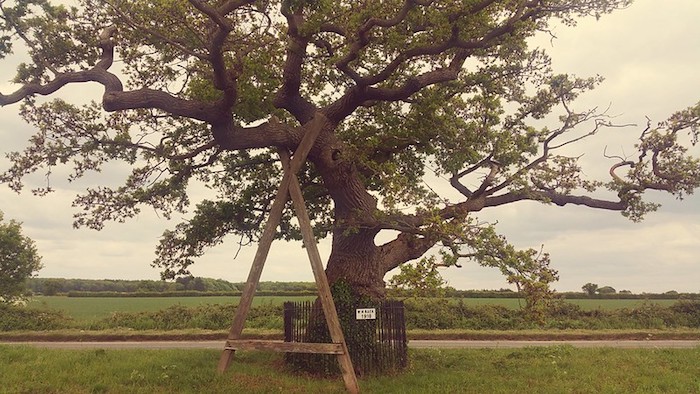 On the walls of Norwich Castle there is a plaque dedicated to the memory of Robert Kett. It reads:

In 1549 AD Robert Kett yeoman farmer of Wymondham was executed by hanging in this castle after the defeat of the Norfolk Rebellion of which he was the leader. In 1949 AD—four hundred years later—this memorial was placed here by the citizens of Norwich in reparation and honour to a notable and courageous leader in the long struggle of the common people of England to escape from a servile life into the freedom of just conditions. [Emphasis added.]

Kett was not just fighting for an abstract idea of freedom—if such a thing as freedom separated from the physical realities of life even exists. The first freedom of any living creature, including humans, is to do just that: live. Democratic citizenship has been extended over the centuries to include broader human and social rights, but it started with an early form of ecology, with the land and access to sustainable livelihoods. What Kett was fighting for was people’s basic right of survival.

The impact of losing the commons can be difficult for the modern mind to imagine. Where once people in England and mainland Europe could support themselves and their families from nearby lands through carefully managed shared use, with enclosure those lands were snatched away, fenced off, and reserved for the already wealthy few. Commons made it “possible to live without oppression or exploitation,” says Peter Linebaugh, historian and professor emeritus at the University of Toledo and author of two books on the Magna Carta and the accompanying Charter of the Forest (an agreement that King Henry III’s nobles forced him to sign in 1217, two years after the Magna Carta)[1]. The loss of the commons, Linebaugh says, was the origin of “jobs”—requiring people to work for someone else’s profit in order to survive. With enclosure, common people were forced into servitude or tenancy, forever afterwards dependent on a “superior” for employment or a lease on farmable soil. The land and its bounty became divorced from their labor and even a subsistence means of survival. We live with the legacy of this injustice today, though most of us have forgotten its origins.

Riots and violent rebellions entangled Great Britain from the 1400s through the end of the 1800s, many of them related in some way to the enclosure of the commons. These actions were the birthplace of democratic citizenship—it was in the struggle over access to the resources held in royal forests and in fights against enclosures that human and democratic rights were painstakingly defined and refined in England and afterwards, in America. The 1217 Forest Charter in particular, which laid out in detail common people’s rights of subsistence, became a foundation for hammering out human and social rights over several centuries. It’s been called a “classic environmental statute,” linking rights of subsistence to a judicial system, the forest courts, that enforced those rights and considered grievances[2]. In the context of this ever-evolving environment-focused legal system, Robert Kett and his followers sought justice against those who enclosed common lands. People had a right to live, the Forest Charter acknowledged, and to do so they needed access to resources. It was a surprisingly adaptable and robust legal framework, but it wasn’t always enough. When rights were denied, or if the judicial system failed, riot or rebellion became people’s only recourse.

Enclosure rebellions and the Forest Charter have faded from memory, in England as well as in America. Those of us who live in these countries have largely forgotten that the freedoms we enjoy and fight to protect, like freedom of speech and movement, grew from the struggle over rights of subsistence. In many ways, those less tangible rights are tied to the actual land we each live upon. Only now, when the fate of the entire planet is at stake, is democratic citizenship returning to its ecological roots.

Today, instead of simply sacrificing common grazing lands, theft of the commons seeps into every cell of human existence: the right to pollute, to extract, to harvest, to freely pursue profit, while leaving a wake of waste in its various forms, is stealing the commons not just from humanity but from the vast ecological entanglements we live among and depend upon. Only now are we remembering that, in order to advocate for higher forms of freedom, humans must first be able to live. We need clean water, breathable air, arable soil, and a habitable planet. All these things are now at risk, both locally and globally. The impact of enclosure might have been more immediately obvious in the fences and hedgerows associated with it, but the modern effects of valuing private profit over the common good are only an iteration of enclosure on a far grander scale. Before they can combat these forces, ecological citizens must look at the deeper histories of humans’ relationship to nature and legal rights of use and ask themselves: Are our systems of justice robust enough to uphold our rights to life and health, or are we going find ourselves in Kett’s situation, forced to rebel in order to survive?

A multitude of injustices stem from the reality that too few people control the resources that every single human requires for survival—in particular, land and water. This stark fact once prompted an otherwise law-abiding yeoman farmer to rebel, and today it leaves many feeling that, as citizens, they have no other recourse than to engage in acts their governments consider illegal, or at a minimum, dangerous. Wet’suwet’en citizens blockading Canadian railways in protest against a natural gas pipeline being built across their territory, Standing Rock Sioux citizens who set up a peaceful protest camp to protect their only source of clean water from an oil pipeline, and people like Greta Thunberg and her fellow School Strike for Climate citizens who seek action on climate change—all of these activists, and many more worldwide, are following in Robert Kett’s footsteps. When multi-billion-dollar corporations profit at the expense of the clean water and land essential to all life, or burn away a habitable planet for our children, and our systems of law and justice do nothing to stop it, then the freedoms we treasure, whether of thought or speech or religion or voting, become at the same time both secondary and essential. Our first freedom, to live, comes from the land that supports all life, but throughout civilized history we’ve had to wrest that right from the grip of the powerful through other means.

In his 1879 book Progress & Poverty, economist Henry George addressed directly the role of land and resource hoarding in political and social unrest. “It is not enough that men should vote,” he wrote, “it is not enough that they should be theoretically equal before the law. They must have liberty to avail themselves of the opportunities and means of life.” He wrote that to neglect the cause of “the unjust and unequal distribution of wealth” would inevitably lead to social unrest. It was private ownership of land, he maintained, that created massive inequalities in wealth and conditions ripe for resistance and rebellion.[3]

Nearly a hundred and fifty years later, the conditions that George labored to unravel and change maintain their hold on Western societies, exacerbated by intractable problems like nuclear waste, leaking oil pipelines, the climate crisis, and mass extinctions. Private profit and socialized waste continue to draw directly from the commons, frequently forcing the planet’s citizens into protests that most governments deem too disruptive to sanction.

Extinction Rebellion, a U.K.-founded climate change group whose actions tend to disrupt daily life (for example, through members blockading bridges or gluing themselves to the windows of Parliament’s House of Commons) but are not violent, was called out by Scotland Yard’s former chief of counter-terrorism as an “extremist anarchist group.”[4] The Earl of Warwick and King Edward VI likely felt the same about Robert Kett and his followers. It’s hard to know whether Extinction Rebellion’s tactics would be so inconvenient to those who hold the reins of power if its message—stop climate change and abandon fossil fuel extraction and use—weren’t even more so. As new as actions like these might feel, they are an ancient necessity.

Will we common people ever escape servitude to enjoy true freedom and justice, as Robert Kett hoped to do? I don’t know. Most of the time, I doubt it. But perhaps we’ve come to the point where we have no other choice. There are no more frontiers to run away to—even colonizing space requires the acquiescence and resources of Earth’s citizens. There are no more lands like the American West to invade and settle. The climate crisis guarantees that there are fewer myths we can talk ourselves into believing, whether it’s that a complete free market will always serve the public good, or that our own futures are separate from the fate of Nature writ large. But if we do come to discard the servile life in favor of just conditions for all, it will be because those same common people took a stand against injustices of all kinds and in as many ways as possible. Ecological citizenship isn’t something we need to invent anew. It’s always been there. We just have to rediscover the capacity for it within ourselves.

Ketts Oak, located at the side of the B1172 road between Wymondham and Hethersett in Norfolk, England.  The tree is the traditional location where in 1549 Robert Kett and his brother William addressed a group of men in what was to become Kett’s Rebellion. Courtesy of stu ban (CC BY-NC-SA 2.0)

[1] Peter Linebaugh, interview by Laura Flanders, “Peter Linebaugh: Who Owns the Commons? An 800 Year Fight for the Public Good,” The Laura Flanders Show, January 6, 2015, https://www.youtube.com/watch?v=nSF3m_Uav6Y [The quoted material starts at about 11:00.]