The Red-winged Knows: Rewilding on a Chicago Shore 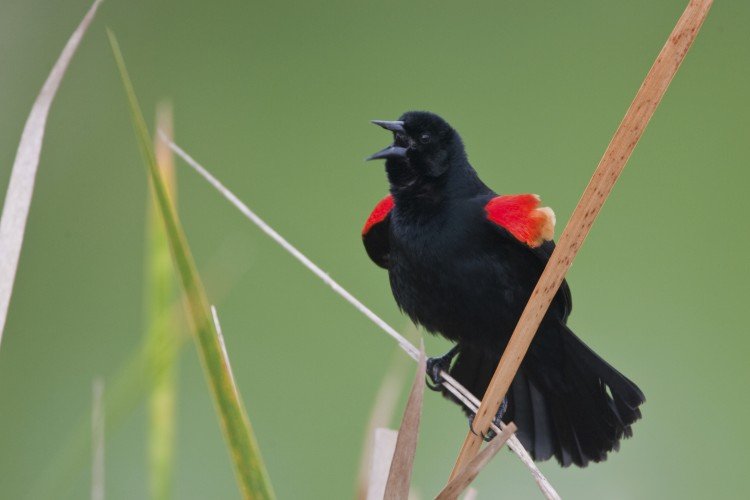 “Whether one goes to nature for truth, or for beauty, for knowledge or for relaxation, these things can be found in a yard in the city as well as a tropical jungle, for they exist in the common, simple, everyday things all about us, as well as the rare and exotic.”

A rewilding, brought about first through neglect and now through intentional human effort, is occurring on Lake Michigan’s shore. Over the years, for me and many others who’ve discovered unique beauties on ambling adventures along Chicago’s shore, the far south end of Montrose Beach and the tip of Montrose Harbor has become a refuge, an everyday wilderness in the heart of the city. 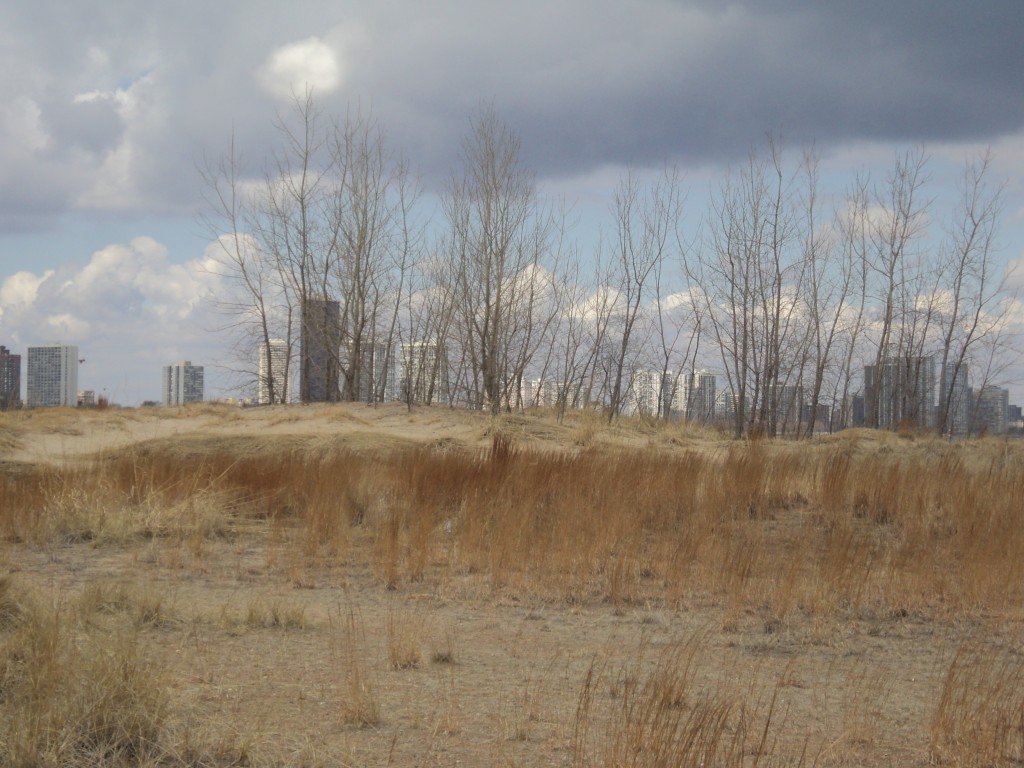 When the weather breaks and the gloom of urban winter lifts, which for me is not necessarily meteorologically dependent, I push myself out of my apartment and head south almost instinctually to Montrose Beach. The beach is just far enough to make me think the walk won’t alter my over-scheduled day, but of course it will and thankfully does. Sometimes if I’ve the energy, I put on my running shoes and with a burst of adrenaline run down the beach and along the shore through Loyola’s campus as if I was twenty-five years younger. Or, in more reasonable moments, I take out my bike with more sense and memory of what it takes to get there. Lately, I’ve found that I can paddle there in my second-hand kayak and hit the beach from the water, hiding my boat in the grasses along the shore as if on a boyhood expedition. But most of the time I take the route on foot.

The beach’s character, history, and most importantly its location are why I’ve become so attached to it. Like the Dunes on the shores of Indiana, this little crevice in the concrete of the city opens my stagnant senses and allows me out of my cage for a while.

Sometimes it is the diverse people that bring me joy—the dog owners, the volleyball players, the family picnickers. Montrose Beach is also a major gathering place for Chicago’s large Hispanic community, and on weekends you can see encampments of families with semi-circles of lawn chairs where aunts and elders sit watching small children corralled in the middle, while women are laying out food on card tables and men gather around the grills and coolers. Nearby soccer fields draw the usual eclectic crowd of players, old and young, from the far suburbs and every corner of the city, providing a sense of home to peoples from what seems to be half the countries on earth. In fact, all along the lakefront, the world cup of Chicago goes on each weekend and summer evening: here might be Ghana against Guatemala, or Bosnia versus Greece, or two teams of eight-year-old girls with animated fathers being warned to stay off the pitch.

But when I need more solitude, I slog through the sand to the beach’s southern end, appreciative of the irregular and seemingly chaotic spaces off the city grid and the value found in stepping, literally, off the beaten paths that so much determine our daily movements.

While the beach and surrounding parklands attract the global transplants that have taken root in the city, on the far southern end next to the fishing pier a local phenomenon has blossomed. To the uninformed eye, the far end of the beach and the few acres of park at the tip of the harbor look unsightly and neglected by the city’s fastidious Park District. What has happened here accidentally (or providentially) challenges traditional ideas of what constitutes urban park space, but not if you’re a plant ecologist or admirer of Chicago’s great anarchist tradition.

The rewilding of Montrose began in the Cold War era, when fears of Russian attacks led to not only guarding America’s large industrial cities on the coasts east and west but its inland sea as well. Montrose was not a sunny, sandy beach but a Nike missile site, along with others positioned across the Great Lakes. When the scare died down, the U.S. Army broke down the barracks and shipped out, leaving trees and a hedge of honeysuckle planted by the men stationed there, who apparently noticed that though the Russians never bothered to show, flocks of migrating birds did. And the unruly brambles of honeysuckle were a favorite target.

Lake Michigan and its shore act as a funnel for one of the largest bird migration routes in the world, and has for thousands of years. It’s hard to imagine for many who live here now but most of metropolitan Chicago and hundreds of square miles extending south into Indiana and northern Illinois was part of a massive flood plain of marshes and wet prairie that was easily as large as the Everglades. The region was drained by settlers at an astonishing rate in the late nineteenth century, including, I must admit, by members of my own family in creating our family farm in Indiana. This drainage is estimated to have reduced America’s migratory bird population by an astounding twenty percent by the beginning of the twentieth century.

The story wasn’t over for Montrose, however. After the military broke camp, the area reverted back to parkland but wasn’t always maintained, and, except for fishermen, barely used. Beachgoers and picnickers generally stayed away. There was little to lure them; the area was trashy, far from parking spots for cars, and, as with all edgelands and marginal zones in urban areas, it attracted those of the edge as well—rebellious teens, drug-users, and men looking for hookups with other men. And so it remained. But the birds didn’t mind; in fact, the less order and more weeds and brambles, the more cover and food. The rewilding of Montrose had begun.

Sometime in the 1980s, the Audubon crowd, who had come to the area for years to watch birds during spring and fall migrations, began to promote it as one of the best places to watch birds, not only in the city but in the whole Midwest. With few other spots for high-quality birding along the lakeshore, the birders pleaded with the city to turn the area into a bird sanctuary by augmenting the habitat and letting plants and trees grow, promising they would assist in its upkeep. The city, the birders, and other volunteers stepped up. In the 1990s Montrose became a nationally recognized bird site and was designated “An Important Bird Site” by the Audubon Society, an unusual distinction for a tiny plot of land in a large urban center. 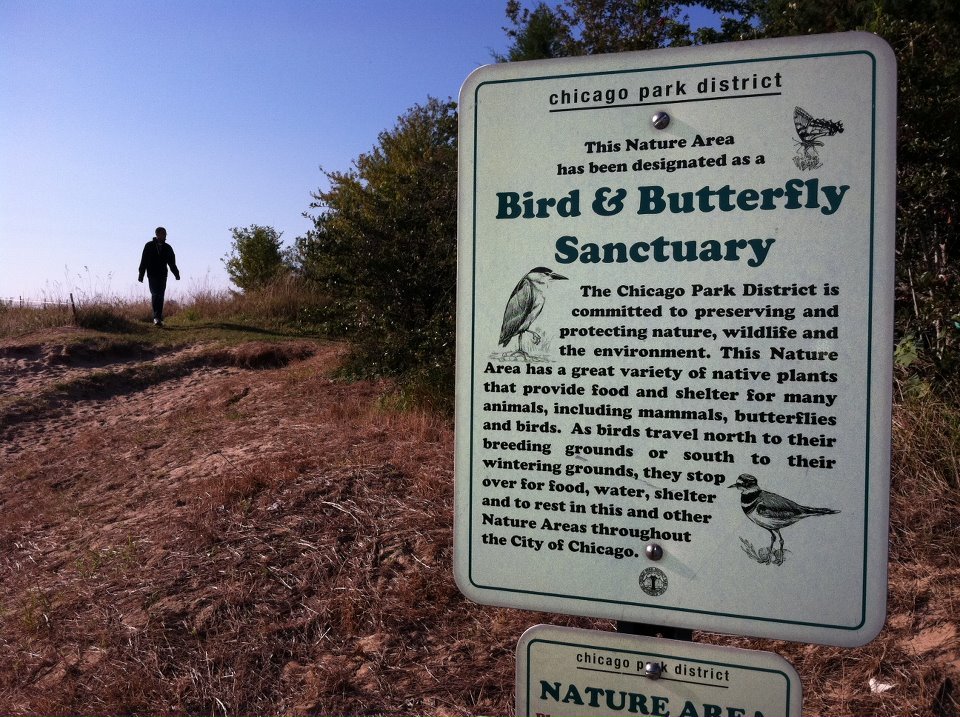 But the story of the rewilding of Montrose doesn’t end there. As elsewhere along the lake over the winter, the winds and waves reshape the beaches, adding or eroding the sand. In a typical May when the crowds begin to empty out of their winter hibernation, the Park District begins to rake and groom the beaches. Grasses, reeds, and cottonwood saplings are plowed under, along with sandals, plastic bags, aluminum cans, and whatever else has washed up on shore over the winter. But at Montrose, the beach is so long and difficult to rake that city workers in their tractors have left part of the south end unraked, thinking it wouldn’t matter much.

But it did. After a year of little maintenance, beachgoers noticed that stands of marram grass, the traditional dune builders which root and prevent wind erosion, had a firm grip on several sections and small piles of sand had formed around them. Along the pier, erosion created a small stand of water and wind further eroded these areas, creating pools and marshy zones where shoots of sedge appeared along with reeds and other indigenous plants. Among the clumps of grasses, up popped the other sturdy dune-builder—the ubiquitous and ever-ready-to-root cottonwoods with their heart-shaped leaves quivering in the lake breezes. The birders in the bushes and grasses above the beach began to take note of the increase in species now on the shore: uncommon gulls and ducks, along with rowdy nesting red-winged blackbirds, killdeer, and meadow larks, as well as shore birds rarely seen on the shores of Chicago—dunlins, sand-pipers, plovers, and migrating terns. Chicago’s important bird site has become a habitat that was akin to what the shoreline had been like for thousands of years. Birders and volunteers boast that over three hundred species have been recorded in this unusual urban sanctuary.

In addition to birds and birders, the beach’s organic renaissance fascinated locals who frequented the long beach and bird sanctuary for its solitude and its semi-isolation from city life. Parks and edgelands like this are often places where people come to heal from physical and psychological wounds that require the therapy of silence and strolling, a release that is felt step by step, as the mind is drawn outward by one’s gaze and held in suspension by the living world. Neighbors and a few local botanists took it upon themselves to pick up trash and nurture the beach habitat that had emerged. As had the birders, they, too, formed a core of volunteers and lobbied the city to set the area aside and provide funds to augment the habitat and nudge nature along with more grasses and a few black oaks.

And so, as I walk up through the bird sanctuary and down into the beach, I forget for a while where I am heading and think about what I’ve witnessed here over the last couple of decades. I’m aware of how nature and a collective vision of citizens—not city officials or landscape architects or wealthy donors—have reshaped this corner of the lakefront. Scanning this undulating beach habitat—with its cottonwood-dotted dunes now five or six times taller than me, its stands of willow, clumps of tall grasses, and thick carpet of sedge and reeds that cover what was once a man-made beach—I see the past and the future, the city not as separate but as a part of the ongoing flowering of this landscape along Lake Michigan. A volunteer is staking a newly planted oak. A photographer near the shore with his telescoped lens is trying to get a close-up of a shorebird. In the background, the built city stands like before, hard-edged and seemingly eternal, but, in the foreground, the ephemeral stands of grass and willows hold up the red-winged blackbird and let it sing for all to know that here is where he lives. 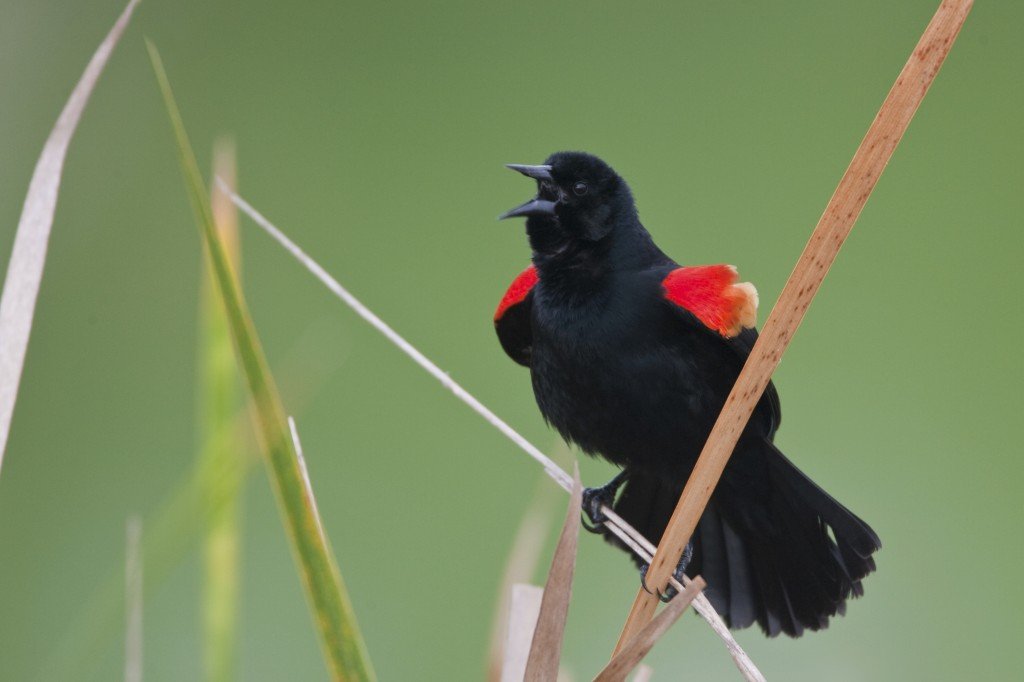