Restoring an Urban Creek and its Monarchs 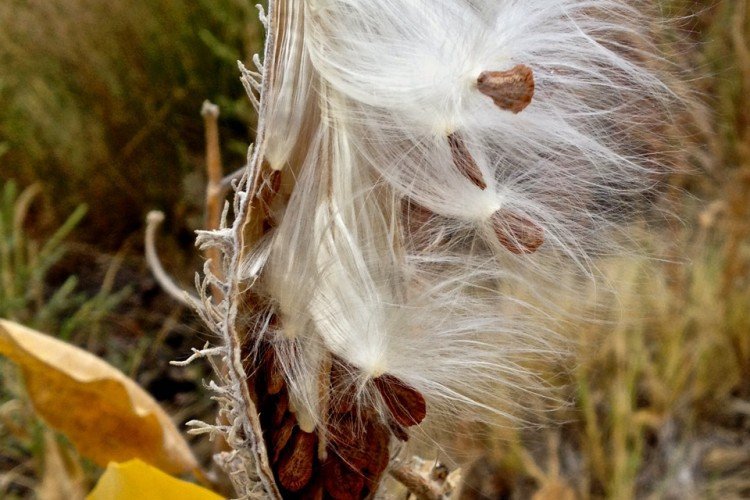 Eighteen years ago, my late husband and I bought a century-old brick industrial shop building along with its half a block of weedy, junk-strewn abandoned property. Our friends thought we were crazy. But we were in love, Richard with the decaying shop—which he could see as his studio, and the rare land in town where he could build us the passive solar house he dreamed of—me with the block of urban creek it fronted. 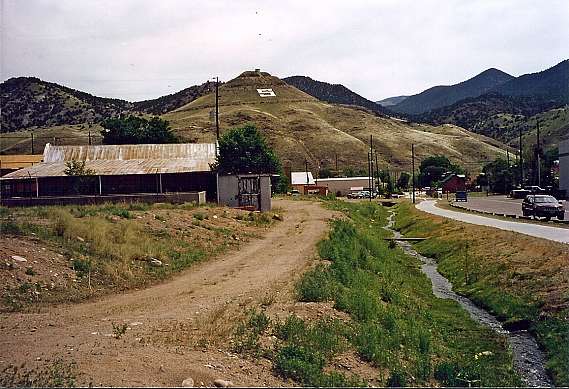 Ditch Creek in the summer of 1997 when Richard and I bought our abandoned industrial property (left side of photo).

I had always wanted a creek to play with. No matter that this one ran nearly ruler-straight between trash-festooned banks that sprouted a prickly fur of invasive annual weeds over broken concrete, scrap metal, and waste asphalt. Or that its thin trickle of unshaded water turned to green algal slime in summer and yielded no evidence of healthy aquatic life. I could see potential.

I set about researching the creek’s history and learned that it had been straightened when railroad tracks were laid alongside its flow in 1879 and that it was redredged in the 1970s for flood control. Looking at that denuded block of creek, a thread of water precious in our high-desert climate, I envisioned green. Not money but a ribbon of green native shrubs shading the water and perhaps a cottonwood or willow tree. With patience, time, and a good bit of sweaty work pulling weeds, I figured we could restore that natural creekside community to shade and cool the slender flow, and filter the polluted runoff from urban streets and an upstream cow pasture.

Empowered by my vision, I talked to the head of Public Works for the City of Salida, because the city owned the opposite bank and the concrete walking/biking trail laid a few years after the railroad abandoned the tracks. It wasn’t hard to convince the City to led me manage the creek instead of the prison crew they had been paying to “tidy”the weeds each fall, chopping the plants down just when they were full of seed and ensuring an abundant crop the following season.

That first summer, Richard and I spent almost every weekend pulling trailer-loads of tumbleweed, kochia, and cheatgrass, carefully stuffing the plants and their cargo of seeds into black plastic trash bags bound for the dump. Come fall, we planted several dozen tublings, six-inch-high seedlings of native shrubs, strategically placed to shade the creek. Richard hauled water to our baby shrubs, and I began sprinkling the weeded areas with a seed mix of native bunch grasses and wildflowers to restore the high-desert grassland of a century before.

By the third summer, the weeds were receding, and our shrubs plus the wildflowers and bunch grasses were beginning to form a wild community along the creek. I began to keep a list of returnees, as the plants themselves “called in”wildlife not seen along the creek in decades: the first western tiger swallowtail butterflies with their lazy fluttering, the first family of mountain bluebirds, the first broad-tailed hummingbirds with their trilling wings, the first bumblebees.

I had restored wildness in urban areas before, so I had some idea of what to expect. One species I didn’t imagine along an urban creek at 7,000 feet elevation in the Rocky Mountains were monarch butterflies, those orange and black icons of the Great Plains. In the fourth summer of our creek restoration, I spotted a silky tangle of milkweed seeds caught in a rubber rabbitbrush and, downwind of the shrub, discovered four showy milkweed plants with their wide oblong leaves and stout stems imbued with milky sap. 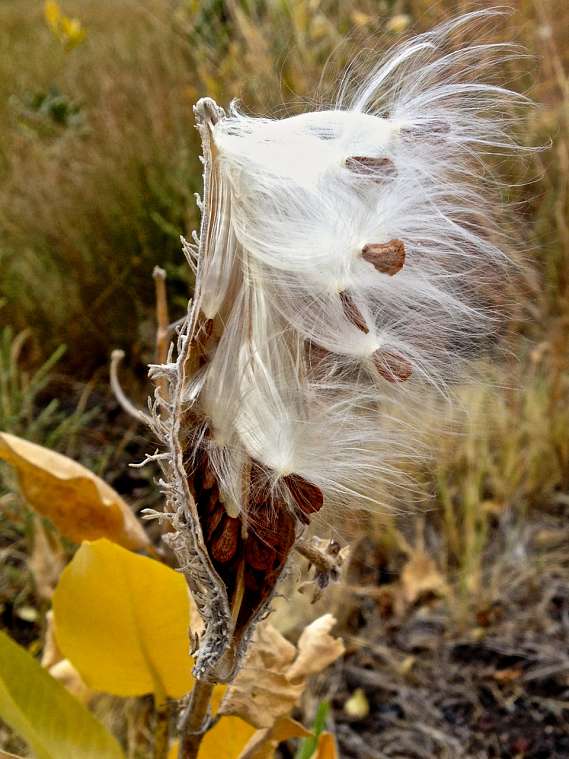 Showy milkweed seeds still attached to their pod, about to take to the air and disperse to form new colonies.

All four plants produced pink balls of flowers that summer, and after the flowers opened, we saw our first adult monarch. I began to wonder if I had never seen monarchs in the area simply because milkweed had been systematically eliminated. Whenever I was out weeding, I searched that patch of milkweed for monarch caterpillars and watched for adult butterflies. I found no caterpillars that year and saw only that one adult.

The next year, 2002, a severe drought dried up the creek. Still, three of the four milkweed plants bloomed. I didn’t see a single caterpillar or adult monarch that summer.

Fast-forward five years and two more droughts to 2007. The original colony of milkweed had grown to six plants; another small patch had seeded in about ten yards downwind. Our highest daily count of monarch butterflies was five adults; still no caterpillars. 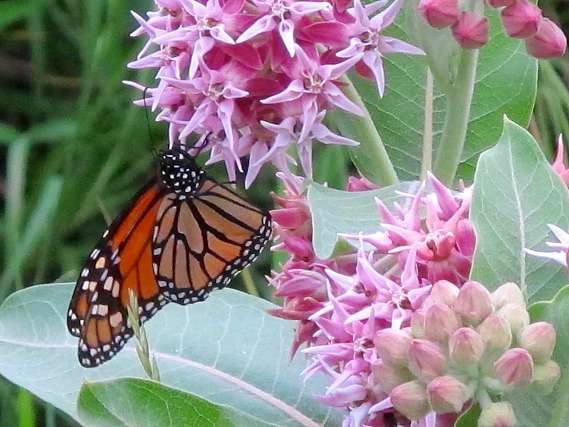 Each year we saw a few more milkweeds and a few more adult monarchs. Four years later, during Richard’s last summer (he died of brain cancer that November), we were pulling isolated kochia and tumbleweed plants from the creek bank when Richard called, “Sus!”

I raced over, worried that he had fallen, his balance impaired by the brain tumor.

No. He had spotted two fat monarch caterpillars munching adjacent plants in a clump of showy milkweed. “Aren’t they gorgeous?”he asked, a huge grin lighting his face.

Our highest daily monarch count along the block of creek that summer was ten adults, plus those first-ever mature caterpillars, a blessing in a very difficult time.

In 2014, the monarch population that migrates from eastern and central North America to the mountains of southern Mexico crashed; that year’s overwintering population dropped to the smallest number ever measured.

Many researchers think a major factor in that precipitous decline is the near-total destruction of milkweed habitat on the Great Plains. The mosaic of diverse prairie that waved before the constant wind like an inland ocean when Willa Cather wrote her novel My Antonia, one of the first pieces of American literature to celebrate the prairie, has been replaced by industrial agriculture dominated by two crops, corn and soybeans. The clumps of milkweed that clung to fencerows and borrow ditches even after farms replaced all but one percent of the tall grass prairie have now vanished with the broadcast spraying of herbicides, and the monarchs have vanished with them.

Could we save the improbable North American monarch migration, a multi-generation saga spanning 2,000 miles of the continent simply be re-establishing colonies of native milkweed, the only food monarch caterpillars eat?

Our experience in restoring this short block of urban creek suggests it’s possible. Almost eighteen years ago, when Richard and I bought the junk-filled property bounded along one edge by the degraded block of urban creek locals still call “The Ditch,” there were no milkweeds in evidence. And no monarchs. 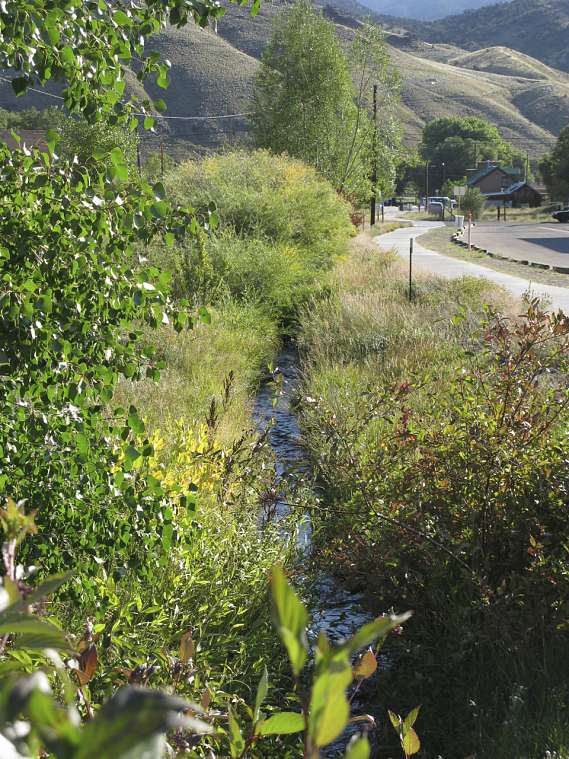 Last summer, as I pulled weeds, I also censused milkweed plants. I found three new clumps of milkweed on the bank at the downstream end of my block. While monarch-watchers in other parts of the country were reporting dismal counts, I counted an astonishing 21 monarch adults on my highest daily tally. Caterpillar counts are still low (I found just seven last summer), but that may be an artifact of the sporadic frequency of my samples rather than actual population size.

Thirteen years and three historic droughts after the first showy milkweed plants returned, this block of urban creek boasts more monarchs than anywhere in the area, and more milkweed plants. It seems to me that’s evidence of the power of restoring habitat: it opens places for all species, and hope for generations to come. And it gifts us with the sense of belonging, the knowledge that we can make a positive difference on this extraordinary blue planet and its green “veins” of creeks and ditches.

All photos by Susan Tweit.