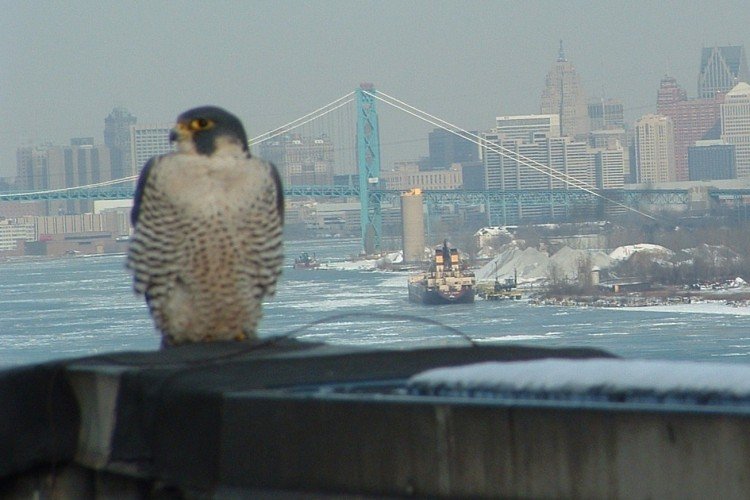 What comes to mind when someone mentions Detroit? Is it automobiles, the Rust Belt, Motown, or professional sports? Each of these is accurate. However, there is another aspect of metropolitan Detroit that is not well known by most people. Most people know that Detroit’s mighty Detroit River is a shared resource between the United States and Canada, and through it the entire upper Great Lakes flow on their way to the St. Lawrence River and the Atlantic Ocean. However, most people don’t know that the Detroit River is quietly undergoing one of the most remarkable ecological recoveries in North America. Yes, Detroit River’s charismatic megafauna are returning!

The Detroit River has a long and much publicized history of pollution and natural resource degradation due to human development, dating back to European settlement in 1701 and persisting through the legacy of industrial manufacturing. For example, the Detroit River experienced massive winter duck kills due to oil pollution in the 1940s-1960s when tens of thousands of waterfowl would die in a season. In fact, from 1946-1948, the U.S. Department of Health, Education, and Welfare estimated that 5.9 million gallons of oil and other petroleum products were released annually into the Detroit River. This shocking statistic becomes still more troubling when one considers that a single gallon of oil can contaminate one million gallons of water. That means there was enough oil being discharged into the Detroit River each year between 1946-1948 to pollute virtually the entire western basin of Lake Erie, including all Michigan, Ohio, and Ontario waters.

During the 1960s, the Federal Water Pollution Control Administration (the predecessor of the U.S. Environmental Protection Agency) characterized the Detroit River as one of the most polluted rivers in the United States. The impact of this water pollution was not confined to the river proper. The Detroit River flows into Lake Erie, which was declared “dead” in a 1965 Time magazine article because of massive, phosphorus-induced algal blooms that were depleting oxygen and, as a result, killing the fish. During the 1960s, bulldozers had to be brought in to remove decomposing algae and dead fish from Lake Erie beaches. In 1970, the entire fishery of the St. Clair River, Lake St. Clair, Detroit River, and western Lake Erie had to be closed due to the “Mercury Crisis” when mercury discharges from chemical industries in Sarnia, Ontario, and Wyandotte, Michigan, contaminated this ecosystem.

These long-standing pollution problems in the Detroit River and the resultant public outcry over them catalyzed many pollution prevention and control efforts (including the establishment of the 1972 Clean Water Act, the 1972 Canada-United States Great Lakes Water Quality Agreement, and the 1973 Endangered Species Act), as well as many governmental, university, and nongovernmental monitoring programs. Collectively, these monitoring programs have documented substantial improvements since the 1960s, including:

This environmental improvement by itself is heartening, but the resultant ecological recovery is amazing, including an increase in sentinel species like bald eagles, peregrine falcons, osprey, lake sturgeon, lake whitefish, walleye, and even beaver. For twenty-five years, no bald eagles produced young because of pesticide pollution. Today, we have twenty-two active bald eagle nests in the watershed. The peregrine falcon population was similarly decimated in the 1950s due to pesticide pollution. Reintroduction efforts were initiated in Detroit in 1987. Today, ten or more young are fledged each year. In 2009, a pair of osprey built a nest in a cell phone tower along the lower Detroit River, representing the first time that osprey successfully nested in Wayne County since the 1890s. In 2001, lake sturgeon reproduction was documented in the Detroit River for the first time in thirty years. In 2006, lake whitefish reproduction was documented in the river for the first time since 1916. During the 1970s, the walleye population was considered in “crisis” and today, along with Lake Erie, the Detroit River is considered part of the “Walleye Capital of the World,” hosting annual walleye tournaments that offer $500,000 in prize money. Beaver were hunted to extinction during the fur trade and could not have survived during the height of oil pollution; however, as of 2013 they are present in six watershed locations.

This ecological recovery is truly remarkable, but monitoring programs also document many environmental and natural resource challenges. The six most pressing ones include: population growth, transportation expansion, and land use changes; nonpoint source pollution; toxic substances contamination; habitat loss and degradation; introduction of exotic species; and greenhouse gases and global warming. Clearly, more needs to be done to fully realize long-term goals of restoring the physical, chemical, and biological integrity of the Detroit River. However, the progress achieved to date, the informed, engaged, and vocal stakeholders and nongovernmental organizations involved, and the broad-based desire to create a sense of place in this watershed bodes well for further improvement.

There is no doubt that this ecological recovery has enhanced outdoor recreation and ecotourism. As a result, the Detroit River is now a major source of community pride and has become the only river system in North America to receive both American and Canadian Heritage River designations, as well as the only international wildlife refuge to be so designated in North America—Detroit River International Wildlife Refuge.

Given that 80% of all Americans now live in urban areas, such revitalization of urban places and watersheds is critically important. After all, such places are where the next generation of conservationists will come from. If you are interested, I explore this story of how Detroiters are trying to make nature part of everyday urban life in a new book titled Bringing Conservation to Cities: Lessons from Building the Detroit River International Wildlife Refuge.

You may even want to experience the Detroit River watershed yourself—by birding at one of the 27 exceptional birding sites along our Byways to Flyways Bird Driving Tour in southeast Michigan and southwest Ontario; visiting our Detroit River International Wildlife Refuge; going kayaking on our Detroit River Heritage Water Trail; fishing for a trophy walleye; exploring our new Detroit RiverWalk that was recently named by USA Today readers as one of America’s 10 best riverfronts; hunting in what Ducks Unlimited considers one of the top ten metropolitan areas for waterfowl hunting in the U.S.; or bicycling along our regional greenway trail system. The next time you think about Detroit, perhaps you will have a new perception of the city and its river: as one of the most remarkable ecological recovery stories in North America.