Salmon Speak ~ Why Not Earth? 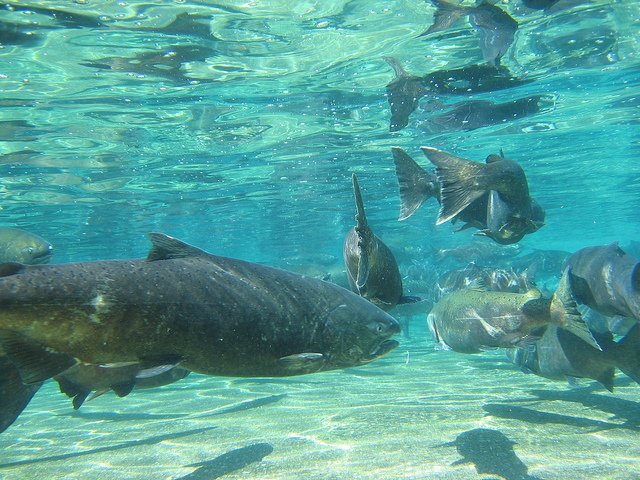 The salmon are speaking to us—if only by their disappearance.

This idea came to me when reading essays by Freeman House, one of the earliest thinker-practitioners of America’s bioregional movement.

For those unacquainted, bioregionalists urge us to go “back to the land,” to re-orient our felt loyalties and sense of citizenship, and our lifeways and livelihoods, within the watersheds and ecoregions we inhabit. They envision a participatory democracy and a corresponding devolution of political power from centralized nation-states to local regions. They contend that it is in our home habitats that we can develop synergistic and respectful relationships with one another and the entire community of life.[1]

In 1974, writing from his home in the Mattole River Watershed of northern California, House wrote to explain the cultural, spiritual, and material significance of salmon. He noted that for the Pacific Northwest’s aboriginal peoples, salmon are persons with whom they are in relationship and to whom they owe moral responsibilities. These responsibilities include the practice of specific ceremonies as behaviors designed to ensure good relations between human and salmon peoples.

House also suggested that, in their own ways, salmon speak to us.

Salmon tell us about our dependence on “the vastness and unity of the North Pacific Ocean and its rim,” House argued, concluding that the salmon are telling us that our wellbeing and theirs is mutually dependent. Finally, they are pleading with us to “get serious about this business of coevolution.”[2] 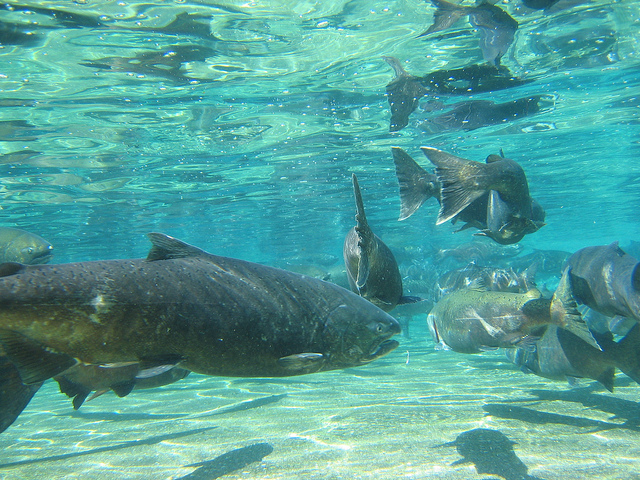 If salmon speak, why not Earth?

We need not be animists in a conventionally religious sense—thinking that divine or spiritual intelligences inhabit and animate the life on Earth—to wonder what non-human organisms would say to us if they had such an opportunity. We need not be pantheists for our imaginations to run wild with Gaian understandings of a biosphere in which all life is deeply interconnected and mutually dependent—to wonder what the Earth would say to us if she could speak.

Some activists have been expressing such curiosities for decades.

A Council of Earthly Speech

In the mid 1980s two activist thinkers, the American Buddhist scholar Joanna Macy and the Australian forest and deep ecology activist John Seed, joined together to develop a ritual process they labeled “The Council of All Beings.” With it they sought to provide a way for people to express their despair about the destruction of nature and the extinction of species. Their ultimate goal was to reconnect people emotionally to the Earth and empower them to stand up for life.[3]

The heart of the ritual they invented involves an act of moral imagination, and a kind of performance art, in which those gathered assume the perspective of nonhuman organisms. These beings then gather to discuss the state and fate of the planet. Toward the end of the Council those assembled speak directly to representatives of the human species, who are eventually brought before them.

The Council of All Beings is a deeply ethical process because taking a moral point of view always involves imagining what it is like to be someone else—in this case, a person who is not human. In the Council, a chorus of inhuman voices speak directly to humankind.

Sometimes these voices are outraged, demanding that we humans “get off the f*ing planet” or asking angrily, “Who do you think you are . . . the only living things that matter?”[4]

Other times they express fondness for us, acknowleding that they appreciate kindnesses we sometimes show them, or find us interesting, entertaining, clever, or even brilliant. But such expressions are generally followed by ambivalence and confusion, and questions such as, “Why are you so callous? Why are you destroying our homes by burying them under concrete, clearcutting our forests, and stealing our waters? Why do you think you have a right to be everywhere, all the time, doing whatever you want?”

Toward the end of the ritual, after witnessing the grief of those assembled and recognizing that not all humans are bent on destruction, these beings often acknowledge that our destructiveness is often rooted in ignorance or fear, and that many of us are well intentioned and are trying to stand with and for them. Sometimes they offer gifts of their own special powers, their superior sense of smell, sight, hearing, their speed in waters and through the air, their resilience, their ability to restore that which we have destroyed. These gifts are metaphorically offered in the hope that we might more effectively challenge the forces of destruction and heal the battered Earth.

If they could, what would the Earth and her offspring ask of us?

However anthropomorphic or contrived it might be, this sort of questioning can be valuable. Imagining what is like to be rhino, songbird, fungi, or the earth as a whole, can lead to moral insights. What do you imagine they would say?

I imagine they would say, learn to listen to what we have already been saying. Their retreat, decline, and extinction, testifies loudly to the terror we have wrought by the plough, axe, gun, bulldozer, pesticide, and dam.

I think they might ask us to get over our territorial impulses and let go of our imperial ideologies and recognize that in the big, ecolgical picture, our well-being and theirs are deeply related.

I think they would ask us to dramatically reduce our voracious appetite for their bodies and homes by retreating, both as individuals and as a species, from our current role as the planet’s dominant animal.

I think they might ask us to remember and practice the cermonies that promote mutual respect and acknowledge mutual dependence. They might add that if we do not have such cermonies and values, that we are fully capable of inventing new ones, and might even have a good bit of fun doing so.

They might ask us to leave behind hopes of divine rescue from this world and its inherent sufferings and urge us instead to rekindle perceptions of Earth as a sacred place, of all living things as our relatives, and to develop ethics rooted in sympathy for all who share the same struggle for existence, which means every living thing.

I think they would ask us to rethink everything, including our social and economic systems, so that they work well with and within the constraints of nature’s gifts and laws. I think they might even urge us toward dramatic and direct resistance to the intensifying and increasingly obvious destruction and suffering that is spreading globally along with our numbers and material aspirations.[5]

I think they likely would also remind us that we co-evolved with them, that we are not and could not have become ourselves without them. I think they might also remind us of our capacity to take delight in one another, and urge us to cultivate this ability and a sense of wonder in life’s beauties and mysteries.  Indeed, I think they would echo the claim that it is time for us to “get serious about this business of coevolution.”

[3] See John Seed, Joanna Macy, and others, Thinking Like a Mountain: Towards a Council of All Beings  (Philadelphia, Pennsylvania: New Society, 1988).  I discussed this ritual in Dark Green Religion: Nature Spirituality and the Planetary Future (Berkeley and Los Angeles: University of California Press, 2010), 21-22. An internet search for the Council of all Beings provides many examples of the shapes it has taken and its influence; for one example, see John Seed’s explanation at http://www.rainforestinfo.org.au/deep-eco/council.htm. For Joanna Macy’s “Bestiary” poem, which provides a example of the moral imagination animating the Council, see http://armedwithvisions.com/2011/08/21/joanna-macy-bestiary/. See also Joanna Macy, and Molly Young Brown, Coming Back to Life: Practices to Reconnect our Lives, Our World (Gabriola Island, BC, Canada; Stony Creek, CT: New Society, 1998).

[4] Here I draw in part from the poem, “Calling All Humans” by John Bartles, which I first heard around an environmentalist campfire and later found published in the radical environmental tabloid Alarm, #3, summer solstice 1992. I also draw on my participation in the Council of All Beings at a number of locations in North America while conducting research on radical environmental groups.