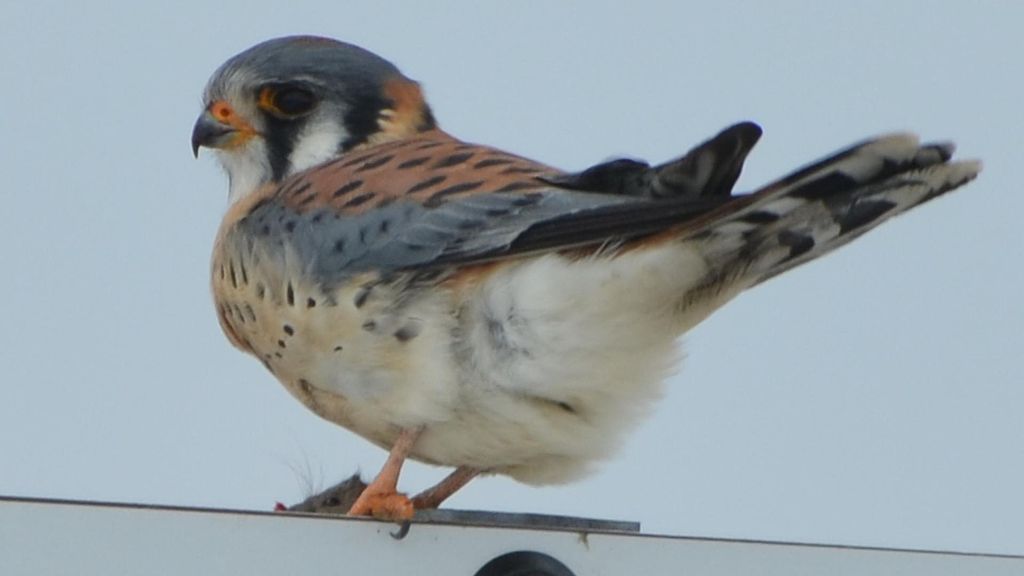 Each survey begins the same: parked well off the shoulder of a country road, I pop my trunk, retrieve and adjust my scope, sling my binoculars around my neck, and scribble some early notes about the time and weather onto my datasheet. Then, I look to the sky and watch. 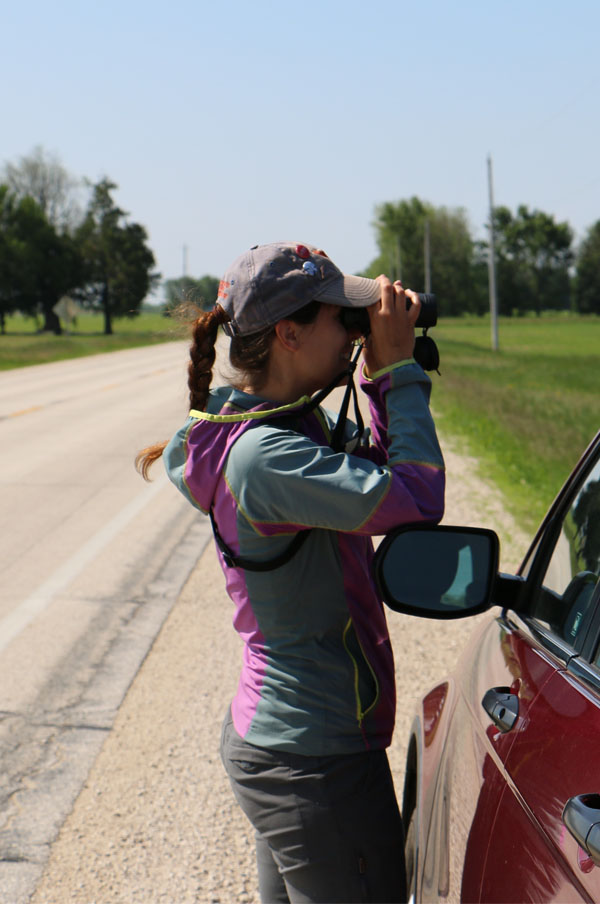 People have been looking up at the sky for centuries, sizing up a wide open, glorious frontier to conquer. And conquer we have. Humans build skyscrapers to reach ever greater heights; fly planes that burn crosshatches in the firmament; and build turbines to harness the wind’s power. 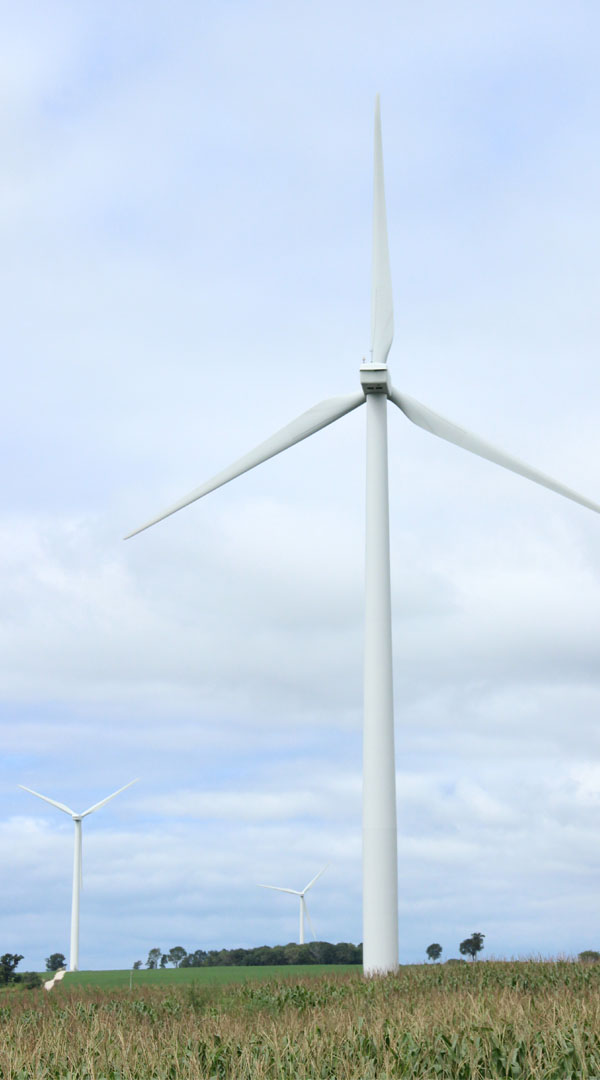 I first catch sight of them as I drive east on Highway 49, a road that cuts through the northern tip of Horicon National Wildlife Refuge and the last leg of my journey from Madison, Wisconsin, to my field site just east of this tremendous cattail marsh. Daring Canada goose parents parade their freshly hatched brood of goslings along the shoulder, American white pelicans fly in lazy circles above the water, and sandhill cranes trumpet in pairs from somewhere deeper in the reeds and out of sight.

This stretch of road is the highlight of my commute, one last moment of pause before my day begins. I look east, towards my destination. There, perched atop the wooded ridge, great spinning turbines decorate the horizon. Still early, the sun hangs low, silhouetting the impressive windmills. Highway 49 leads me up over the ridge and I am surrounded by turbines. It is a provocative juxtaposition: chalk white towers, sleek, clean-edged contours, erupting from vibrant fields of corn and soy. This is the wind farm where I conduct my research, an 86-turbine facility where I spend my days counting and observing the behavior of resident raptors. After the wind farm’s construction in 2008, many of the raptors left. Now, 7 years later, I press my binoculars to my eyes and search for these predatory birds in an attempt to answer this simple question: Have the birds returned? 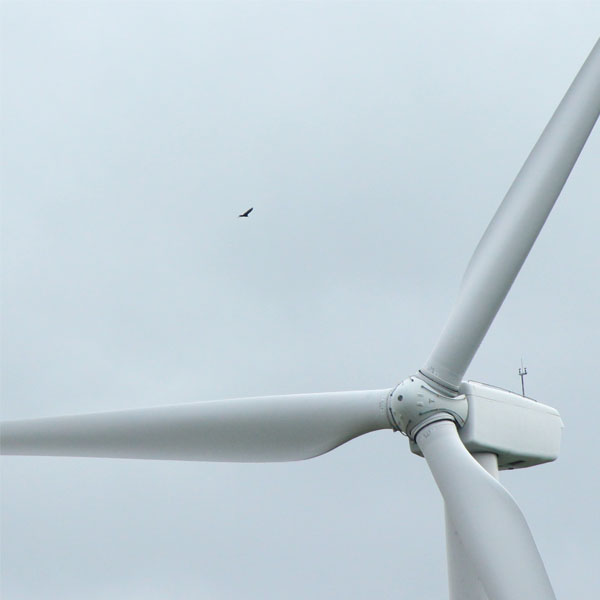 You might expect that this would be a rather bleak setting for bird watching, but I do see birds, many birds, an almost intimidating amount of birds for only one person to count. There is beauty here: the crimson flash of a red-tailed hawk’s namesake tail as it catches the light on a cloudless day, or a power line dotted with American kestrels, who bob in anticipation of the hunt and take to the wind as I roll past. On very lucky days, I catch glimpses of “special” birds.

The sky was clear, the sun was bright and hot, and a steady wind caressed the fields. But more than that, there was a spark in the air; my arms were peppered in goosebumps despite the balmy temperature. Then, still within the first minute of my hour-long survey, my first bird appeared, drifting north and staying low along the tall, wild grass left to grow unchecked in the fallow field beside me. It was an unmistakable bird: a male Northern harrier. They are known as “grey ghosts” in the birding community for their silver back, white belly, and haunting disposition as they drift low across the ground. 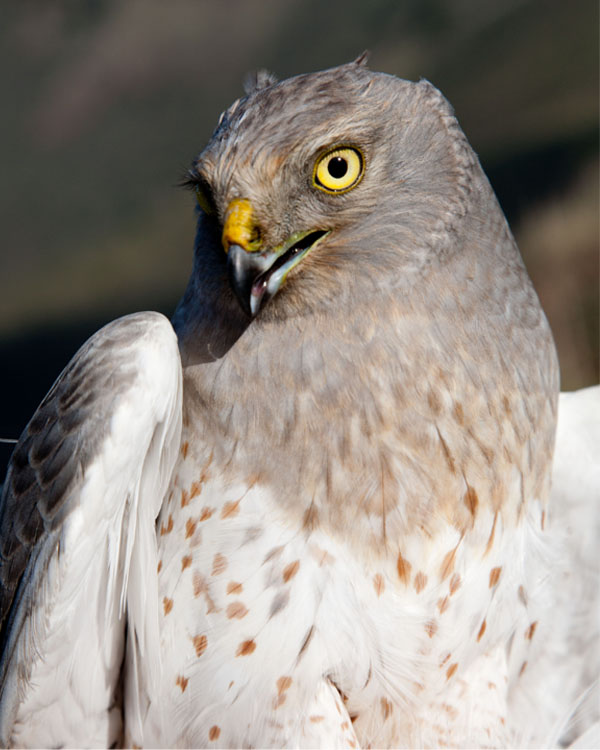 The harrier swept the field in front of me, meandering idly closer and closer until my binoculars were no longer necessary. Still, I kept them glued to my sockets, soaking in every detail of the male: his sour lemon eyes and the speckling on his breast. Then he lifted up off the dew-glittered grass, rising into a beam of sun. I’ll never forget how he looked; in that moment he glowed, haloed in crisp, morning light. I was struck by awe to share that space with him, to breathe air that felt so charged with magic. I watched him for as long as he allowed, about 7 minutes, before he melted into the tree line beyond the fallow field.

This is just one image of life in and around a wind farm. My first season of collecting data is filled with memories like these, little vignettes of a remarkable world in which I felt like merely a bystander. But as I’ve honed my observational abilities to identify raptors for the sake of my research, I’ve also come to notice other birds living in similarly crowded skies.

Raptors aren’t just learning to live with turbines, they’re learning to live in cities. This summer, a  pair of red-tailed hawks nested on the building across from my office on campus. I know because the fledgling’s pitiful bleating often welcomed me on my morning bike ride into work. The ability to project a mournful song must be an inherited trait, for the parents shared the young hawk’s penchant for shrieking. They too were a common sight, circling above my building and singing their iconic call. Other raptors have caught my attention as well. Once, a Cooper’s hawk streaked in front of my bike, wings tucked in, shooting like a bullet towards a small flock of songbirds feeding beneath a bush. Often, while stuck in traffic on the Beltline, I count the turkey vultures drunkenly tipping and dipping their way across the sky. It is hard now not to be aware of the raptors who thrive in our urban environments. I am grateful for this awareness.

The raptors of our cities, like those at my wind farm, are tenacious, adapting to increasingly busy skies. I find beauty in this resolve. They were champions of the sky well before humans started looking and building up. We have built so high, flown so far, reaped so much that, at times, it may feel like we own the sky. But this isn’t true. Look up and it’s plain to see that we share it.

That is the essence of what I study: the interactions and potential conflicts between wildlife and humans. If I were to frame the question that drives my research in layman’s terms, I might put it this way: Sharing, can we do it better? I suspect we can and believe we are starting to. Since the industrialization of the windmill, humans have learned a great deal. Innovative thinking has led to redesigned turbines, reducing their impact on flying wildlife, and a better grasp of avian behavior and movement has improved the wind farm siting process. But there is still much to learn. That’s where I come in, watching the sky, waiting for the raptors to return. In this way, I hope to further our understanding of the long-term impacts of wind development and our appreciation of the possible permanence of our actions.

I know at least that my perspective, looking up, has changed. Now, when I crane my neck and set my eyes on the great blue above, I don’t see a domain for humans to conquer, but an already beautiful world filled with life. A sky worth sharing.