Shhh, We’re Listening to the World 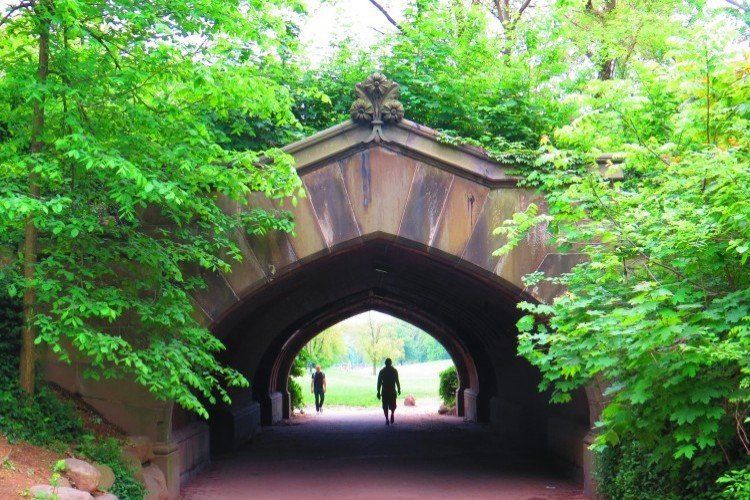 When Frederick Law Olmsted and Calvert Vaux designed Brooklyn’s Prospect Park following the Civil War, they brought with them lessons learned during their first project working together. One of these lessons from Central Park was that a road through the middle of a greensward is a terrible idea. They sunk Central’s roads below grade, an inelegant and amputating concession to Manhattan’s ruthless street grid, which was still mostly conceptual that far north. Today, Central Park is still 258 acres bigger than Prospect Park, but Brooklyn’s park feels more expansive because it’s not bisected by gaping road ditches. 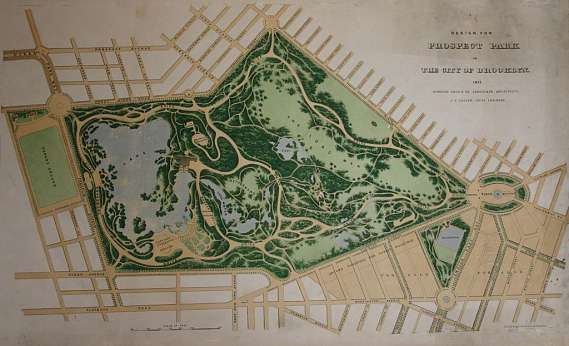 Design for Prospect Park in the city of Brooklyn by Olmsted Vaux & Co., Landscape Architects, 1871. From the Brooklyn Historical Society Map Collection. (Flatbush Avenue is the road running ENE in the lower-right portion of the map.)

In Brooklyn, Olmsted and Vaux realized Flatbush Avenue, the old thoroughfare through the land set-aside for the park, would cause the same kind of problems as the roads through Central. They sheared off Mount Prospect from the rest of the park-to-be by arguing, for the sake of the bean-counters, that tunneling and bridging the avenue would be needlessly expensive. The second highest point in Brooklyn was thus orphaned, leaving only its name to the park. Flatbush Avenue never went away—damn few roads ever do. To bulwark their park against this thoroughfare, Olmstead and Vaux had a berm built to deflect its sights and sounds. This was, of course, before the automobile, but the nineteenth century was louder than many of those well-dressed PBS-imports let on. The berm still dampens the avenue’s roar. (The new Brooklyn Bridge Park employs a similar strategy to baffle the howling of the Brooklyn-Queens Expressway, only its berm is much taller to counter the double-decker highway.) 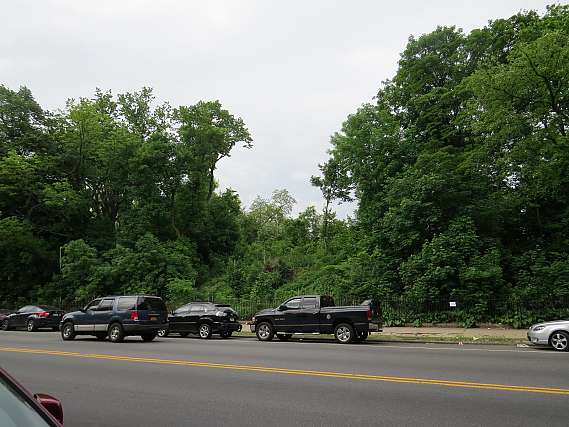 Gap in the trees of the Prospect Park berm. Photograph by Matthew Wills.

I learnt about this from Tony Hiss’s The Experience of Place, but I think I intuited it when I first entered the park from Grand Army Plaza. You feel the sensational presence of the city diminish as the path curls behind the berm and the sounds of the park itself begin to envelop you.

So this is the way I now lead people into the park on my Listening Tours. I’ve been doing these for four consecutive springs to coincide with the arrival of migratory birds. Prospect is a “migrant trap,” a welcome oasis of greenery in the megalopolis, providing food, water, and shelter for exhausted birds on their epic migrations. The dawn chorus—for some species it can start as early as 3 a.m.—is memorable anywhere for its musical variety, insistent force, and beauty, but in the city these sounds are especially treasured, and, for some of us, anyway, something to hunger for.

On the Listening Tour, we walk, pause, and listen, usually in a loop into and out of the park. That’s it. Phones and gadgets are shut off, of course, although the self-selected who join these walking meditations seem not to get many calls and texts between 6-7:30 a.m. on a weekend. There’s no talking. Instead, I hope participants will turn on and tune in their ears.

Listening requires some work after the ears have been marinating in the urban cacophony. When it’s too loud, we don’t want to hear, and for good reason. But the point of my tours is to recalibrate hearing by really listening to the songs, chipping calls, noises (leaf scratching, wing flapping, etc.) of several dozen species of birds, as well as squirrels and chipmunks, who can also be quite vocal, and whatever else may be sounding off just after the crack of dawn. Even a Black & White Warbler can be heard creeping along a tree trunk if you listen hard enough. 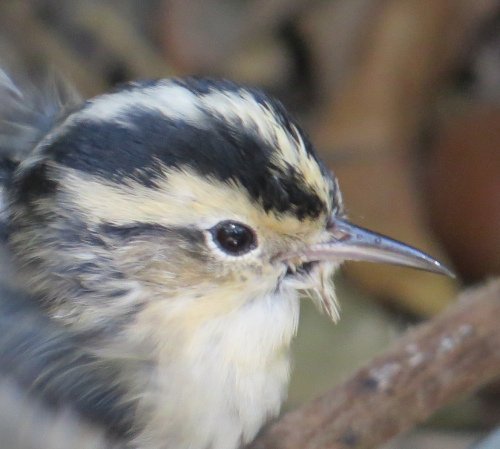 On my first tour this year, I was out of the house just after five a.m., for the forty-minute walk to Prospect Park. Robins and House Sparrows filled my ears. It’s the only time when these sounds can be heard above all else in the city. The occasional car highlighted just how loud vehicles really are, and how we have grown accustomed to them. We’ve all become unwilling experts in the Doppler Shift, and have sacrificed much as a result.

The Indian Peafowls in the nearby zoo were screaming, adding an exotic element to the mix of bird songs that ranged from the subtle buzzing of warblers to the harsh jarring of Blue Jays, with Cardinals, White-Throat Sparrows, and Catbirds providing the choral backdrop. It turned out two of the peacocks had gotten out of the zoo overnight and were mingling with joggers, bicyclists, and, perhaps less favorably, dogs. One flew high up into a tree, reminding us that it was in fact a bird, his long train of feathers like a ball gown the morning after.

There’s no telling what we will hear: a tour a couple of years ago coincided with May Pole celebrants, whose beautiful singing ended our walk with the finest of human sounds. I always tell people to expect nothing, and everything. A tiny House Wren producing huge amounts of song. The rain-like whoosh of thirty cyclists in a peloton. Woodpeckers banging away at hollowed-out trees. The sweet rolling cadences of a Wood Thrush hidden somewhere in the undergrowth. Birders, a number of whom I know, wondering where our binoculars are…

On my last tour this year, the weather threatened rain, which produces fascinating sounds, and delivered a thick fog. These sound-muting clouds on the Long Meadow obscured the distance through the gothic point of the Endale Arch, which meets the curving path from Grand Army Plaza as a portal into the heart of the park. The soft green landscape within looked like another world. It was a view, and a soundscape, that would have been familiar to Olmsted and Vaux, when very little else would be today. 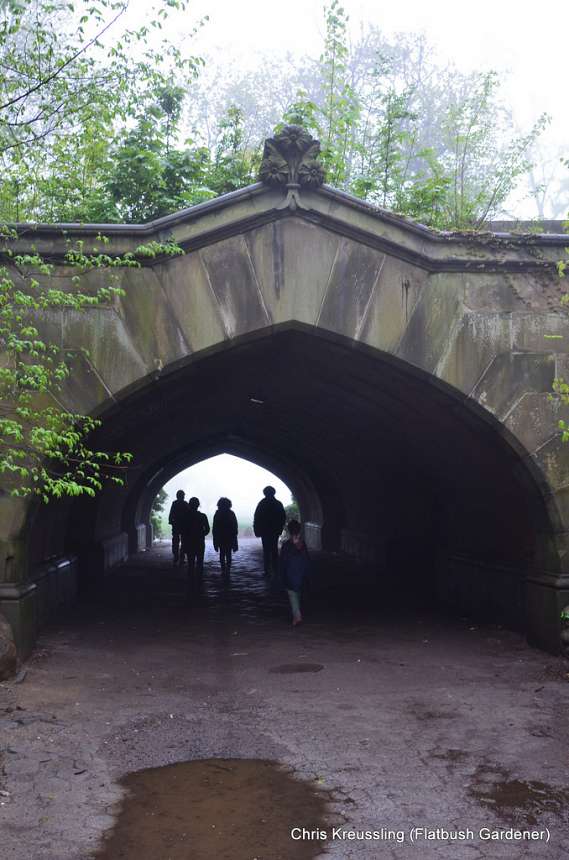 Endale Arch in the morning mist. Photograph by Chris Kreussling (aka Flatbush Gardener).

*Matthew Wills blogs about natural history in Brooklyn and elsewhere at Backyard and Beyond (http://matthewwills.com).