Speaking Truth to the Secretary of the Interior

Editor’s Note: The following article, introduced by James Edward Mills, is a contribution by an outstanding student from the Greening Youth Foundation, whose voice enriches the ongoing conversation that is Minding Nature.

During the summer of 2016 my experience with the Greening Youth Foundation was both profound and enlightening. In my second year in their Historically Black Colleges and Universities Internship (HBCUI) program, I became more confident in my abilities to truly grow as an individual. Having just graduated from North Carolina Central University, it was my sincere belief that this opportunity would enhance my professional expertise and further prepare me for my next chapter at North Carolina State University’s graduate school.

Even though I felt overwhelmed by the challenges presented in this program, I knew that this particular program was the best choice for me. From themes of historic preservation to education, HBCUI offered numerous positions that catered to my interests. It was hard leaving my home and family for so long, almost two months, but through the supportive relationships I had created with National Park Service staff members, who had become like an extended family, I knew that I would be able achieve my academic goals. I’m so fortunate.

As a history major, I had the opportunity to practice skills I had learned at North Carolina Central University. Having the chance to work at National Capital Parks–East’s Mary McLeod Bethune Council House National Historic Site, the first official headquarters for the National Council of Negro Women (NCNW), I learned much about the preservation of our cultural heritage through interpretation. My supervisors, Margaret Miles and John Fowler, were dedicated to educating me in the park’s history and shared with me their enthusiasm and pride in the enduring legacy of Mrs. Bethune, the founder of the NCNW. I had to be able to passionately express and convey her extraordinary story, as well as that of the NCNW, to a very diverse audience. Interpretation is a key factor in the park’s success. It was my responsibility to provide each visitor with a compelling experience that would allow them to fully understand the significance of this great woman who did so much to secure the civil rights of African Americans. It’s very unfortunate that a lot of people had never heard of Mrs. Bethune, but they always thanked me for sharing her veiled story. 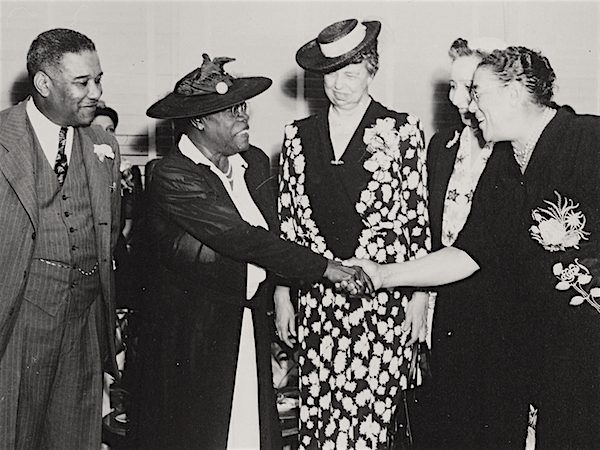 Throughout my experience I worked on different projects and coordinated various events. With each initiative, I focused on archival and historical research. I did intensive research on Mrs. Bethune and the NCNW. Through this research, we drew very interesting connections to a new park, the home of Carter G. Woodson, an African American historian, author, journalist, and the founder of the Association for the Study of African American Life and History.

In addition, a fellow intern, Rochelle Ward, and I were instrumental in organizing two big events held at the park. First was a book signing of Diane Kiesel’s book, She Can Bring Us Home. This book was important to the park because it narrated the story of the second president of the NCNW, Dorothy Boulding Ferebee. I personally had the privilege of assisting in event planning and creating the posters for the event. The current NCNW president also attended and gave opening remarks. (It was such a relief that the NCNW president, Ms. Ferebee’s descendants, and other visitors were pleased with the book signing.) We also had the opportunity to coordinate Mrs. Bethune’s 141st birthday celebration; I was the official photographer, documenting the festivities, and we led the efforts to plan interpretive events for the children and adults who attended.

Finally, I was in charge of creating biographies of key leaders whom Mrs. Bethune worked closely with in her lifetime. These biographies were heavily researched and edited so that they could provide valuable information to the public. They will be presented on the Mary McLeod Bethune official NPS website when finalized.

Everyone at Mary McLeod Bethune Council House was so welcoming. They made it their goal to teach me their many responsibilities. HBCUI gave me the great opportunity to explore and learn about this historic site and share my enthusiasm with others.

Through HBCUI I was also selected to participate in a meeting between Secretary of the Interior Sally Jewel, and the Next 100 Coalition, a group committed to diversity and inclusion in the management of public land. This meeting gave me the opportunity to meet with key government officials and major community leaders. I valued this chance to express my gratitude for working with the National Park Service.

This was also a safe place for me to talk about the need for diversity in the federal agency that is in charge of historic preservation. I expressed my concerns about being a woman of color in an underappreciated African American Historic Site. During my internship, I learned about the remarkable history of a woman and her organization. Unfortunately, it seemed that the facility dedicated to Mrs. Bethune was being ignored, not just by the rapidly gentrified neighborhood that surrounds it, but by National Capital Parks–East. Though I observed a deep sense of commitment in the park rangers who worked at the site to push for the park’s success, it seemed their efforts were either met with resistance or disregarded. So, in our meeting, despite my nervousness, I very bluntly asked the Secretary, “How can I work for the National Park Service when I feel as though my people’s history is undervalued? How can NPS promote diversity when it hinders itself from celebrating its own?”

Yes, this was hard to say, but I said it anyway because it needed to be said. Though taken aback by my words, I believe the Secretary heard what I had to say. The issues we face today are never going to be easy to express, but I appreciate that I had a space to say it. I appreciate the fact that I was surrounded by a group of individuals who were willing to listen and to add to the conversation.

This internship showed me why I fell in love with history and why it is so important to preserve our national historic sites and monuments. The Greening Youth Foundation gave me the chance to again work in my chosen profession. I will forever be grateful for the opportunity, and I can only move forward after this. I know for a fact that my future will entail a career in historic preservation and education.