Having gotten hopelessly lost on my way to the post office in my new Chicago neighborhood last week, a state from which even the smart phone’s smartness failed to deliver me, I stumbled across a community garden on the grounds of a public school. 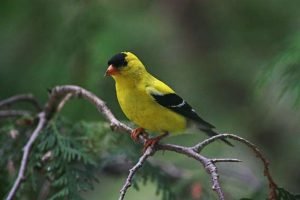 There were goldfinches, which I enjoy on account of their yellowness, and a burnt orange butterfly with black dots. But what I liked most about the garden (despite the smallness of the enterprise compared to, say, the Chicago Botanic Garden or the Morton Arboretum) was that when I stood in the middle of it there was no border: nothing beyond its overgrown, weedy terrain was visible or audible. This, to me, is a sort of litmus test for every natural area in a city. Millennium Park and the other Park District properties are beautiful, but they all have clearly discernable borders.

I find “Urbs in Horto” spaces but rarely, and only by stumbling across them. Dedicated searches never seem to lead to there. Looking on Google for a hidden path down by the river, I found the North Shore Channel Trail, its name ripe with possibility. But from its beginning at Lawrence and Francisco until my legs gave out, a chain link fence kept me many feet away from the water’s edge; and in any event, the other side of the fence looked next to life-threatening.

The ideal against which I measure these natural spaces, the prototype you might say, dates from when I was a child in Philadelphia, long before cities began developing their waterfronts as tourist destinations.

In the summer we neighborhood kids ran wild down by the banks of the Schuylkill River, surrounded mostly by gravel and discarded construction materials, though the gritty urban character hardly put us off. We clambered about on the giant slabs of concrete under the expressway that ran right along the river, we waved at the engineers who drove the trains along the freight tracks there, and in the winter we rode our sleds down the expressway embankment. 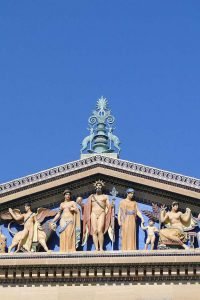 Further west, the Philadelphia Museum of Art, shaped like the Parthenon, crowned the hill above the river. In the museum’s front court, the triangular space between the tops of the columns and the roof line featured a brightly painted pantheon, as charming and droll as the set of miniature plastic Disney figures my aunt had given me. The back of the museum faced the river.

My companion on many rambles was Daniela, the next-door neighbor girl whose father worked for the German consulate. One green summer day, pushing the limits, we went up toward the museum, then behind it, then beyond it. A row of low bushes marked the edge of the slope down to the river, and something about those bushes caught our attention. There was a gap; we went closer and investigated. A path led downward at a gentle angle, edged by a blooming and buzzing intensity of plant and insect life. Disregarding every safety rule ever promulgated by my parents, we set forth upon it immediately. 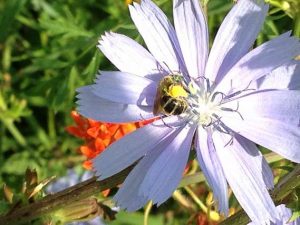 We were immersed in a new world in no time. The built environment above was no longer visible; the end of the path was not in sight; the plants on either side grew taller than our heads. And what plants they were! I recall, against a background of the brightest possible green, cunningly shaped pods elves might have dwelt in, bright orange fruits, papery discs. Above, dragonflies zoomed back and forth; below, lizards—lizards!—raced across the burnt sienna gravel path. The bright Greek gods, affixed, unmoving and silent in front, had descended here to lead their riotous lives once again. 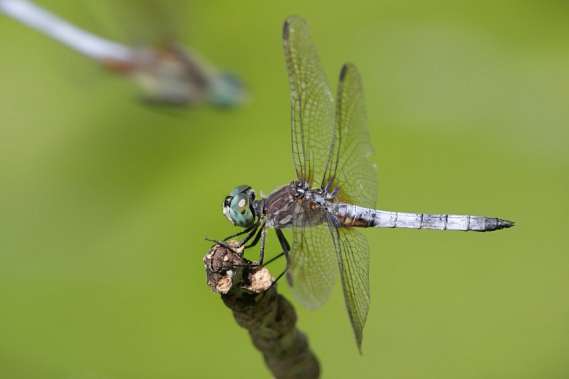 The path lost none of its enchantment as we followed its switchbacks all the way down to the water. We emerged from a thicket at the bottom to see the riverbank, a great deal greener and livelier than we had ever known it to be. Iridescent insects crawled and flew, orange and yellow butterflies posed on the weeds, and the river flowed gently on. Eventually, full of wonder, we went home.

But for a child, every day is full of wonders, and we soon lost track of that one. Certainly I returned there in my mind many times over the years, but it no more occurred to me to actually try and find the path than to recover a dime dropped down the subway grate. Then, as suddenly as the original gap in the bushes had caught my attention, I did want to go back, or try to go back, to where the wild things are.

It was 30 years on, but still, I thought, but still… I trudged up by the art museum. There was an ancient-looking wrought iron fence barring passage, so however Daniela and I found the path the first time, it couldn’t have been by walking around the building. But the pantheon was still there just as I remembered it—an encouragement to continue, quite literally a sign from the gods. So I wandered a little way up the parkway that ran by the museum, talked to a guy walking his Bernese mountain dog, walked a little farther, and caught sight of a sign advertising a new museum down by the river: the restored 1800s Philadelphia waterworks. (Well, it was actually the restored waterworks that had opened in 1815 and been decommissioned in 1909, but I digress.) I followed the sign. The riverbank had changed a great deal over the span of three decades. A wide, gracious lawn studded with benches led genteelly down to the water’s edge. The waterworks museum itself was a small, graceful building with an interesting display of historic equipment inside. 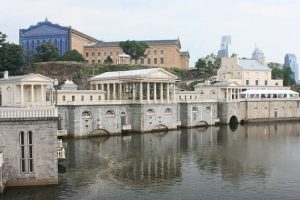 On the river, the omnipresent Canada geese floated serenely and pigeons flapped overhead. If there was any insect life on that well-kept grass, I didn’t observe it. Of the wild, lush growth I remembered—teeming with plant and animal life, leading to places uncharted, hinting at ripe opportunity—there was no sign. It had been erased, flattened, tamed and structured. I was a little depressed, but everyone knows you can’t go home again. As I began the return trek, deciding to walk along the river as far as my childhood apartment building, I didn’t feel resentful about the way the city fathers had fixed things up. The restored historical environment was, admittedly, elegant.

In addition to the waterworks museum, they’d added an observation platform with a balustrade at the top of the hill, and branching out from the platform on either side, a walkway down to the river supported by elegant arches proclaiming the pre-Mies van der Rohe belief that more is more. And then, with slow recognition, I understood: it was down one of those paths—supporting structure filled in with dirt, twin completely buried—that I had walked that summer day.

I wasn’t much disappointed; on the contrary, I thought it fascinating that thirty years ago I had known nothing of the finely constructed, man-made support under the path; and that I am quite possibly the only person in the world who knows so well now what it used to look like then. 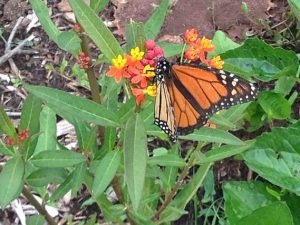 It’s funny; when I moved from a beautiful, green suburb to Chicago to live a more urban life, thinking that I had to give up the more natural for the more vibrant, I had forgotten that there is nothing more urban than stumbling upon a hidden wild place in the heart of the city. The heron you might find in a nature preserve in Wisconsin is more vivid, more memorable, and more satisfying when the neighborhood street you’re on dead-ends at the river and you suddenly glimpse the bird there. A community of goldfinches, monarchs, dragonflies and overgrown vegetation, secluded from its built-up surroundings, coheres better than in bigger expanses, putting Nature’s marvelous ways on greater show.

Nature in vast places reminds me that it is red in tooth and claw, and nature contained by fences and cement walkways seems hardly nature, but a wild green space in the city returns me to childhood, and gives me the gift of a day full of wonder. I am grateful to have so poor a sense of direction that not even my smart phone can keep me from it.