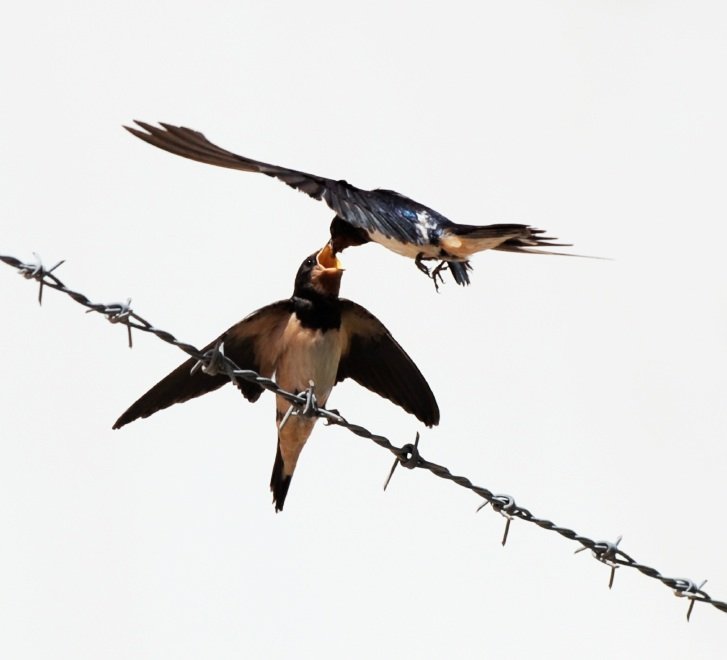 Not too long ago this summer, not too far from Chicago, on property I visit often, I was sitting on the grass outside a long-empty timber frame barn on a cloudy afternoon, watching the barn swallows. Some friends of mine were looking around inside, so the swallows didn’t go in. They’d fly near the small open window they prefer, realize the humans were still there and shear off into the air faster than you can read these three words. Up above the roof, and around, in elliptical swoops, careening around a silo, never coming to rest. The wind was blowing hard, straight from the south, but as it came off the cornfields and encountered the barn it crashed and morphed. And as I watched, I suddenly saw the changing shape of the wind manifesting itself in the chattering birds’ flight; saw the air embodied as the four swallows rode the waves like expert sailors.

Acute attention often generates questions then insights into ordinary surroundings—thus the shape of the wind, thus the birds’ reactions. How does air push up over a barn? Only with prolonged observation did its shape and complexity become evident, as well as the birds’ own understanding on the wing: they created their own complex flight patterns in response to the wind, each other, and the interlopers inside. This was something like the workings of live orchestral music, I think, with its dependence on time, dynamics, and the players’ physical effort that creates its own airy shapes. Intense listening is another form of observation. The people inside were unaware. They value the birds, but were absorbed by other concerns, considering in their own species-specific way “what should be done” with the barn. 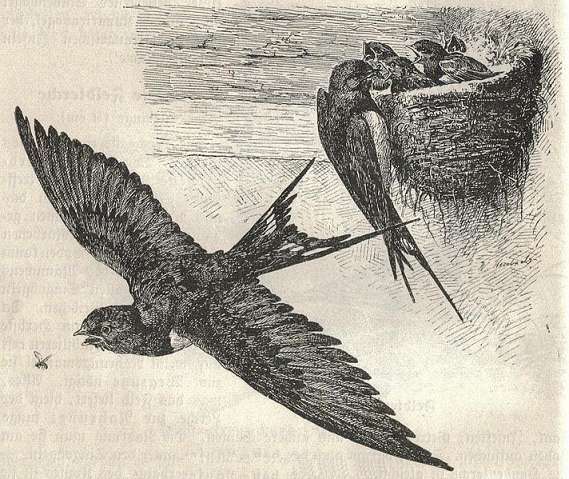 That I was there didn’t matter to the swallows. To them, the wind and the barn mattered immensely, as did their mud and grass nests inside. The barn has been there perhaps 150 years since Quakers first farmed this land that remains in the stewardship of the Illinois Yearly Meeting of Friends. Inside you can see the axe marks on the hand-hewn beams, some of which are tree-shaped along the lower edge, rough bark still attached. You can see daylight between the walls’ wide, uneven, vertical planks that were painted blue long ago. A barn owl used to live in the loft, but I haven’t seen it for a couple of years. The swallows’ nests are attached to the walls at places convenient for entrance and egress on the wing. Before it was a farmyard, this place was prairie. Now, a tangle of bushes and old-field plants like tansy, hemlock, and elderberry encroach. Apparently the insect population remains stable. How soon after the barn was built did these birds’ ancestors arrive to nest, to greet the farmer each spring, to bless him with their insect-catching abilities? Where did they come from? Were the swallows migrants, like the farmer, to a new land? How soon after he built the barn did they arrive? His descendants are long gone off into the wide world, yet these creatures abide.

One summer evening some years back, I rested in a backyard chair, looking up at fat little cumulus clouds sailing west to east like gilded nineteenth-century pink imaginings over the houses on my block. The neighbors’ sky-hiding silver maple had just been taken down for fear of the more frequent severe storms that have come our way with climate change. I leaned back, eyes closed. Unfamiliar chittering. Up above the trees that stand taller than the tall American foursquares with their full basements, two high-ceilinged stories, full attics and peaked roofs, way, way up were little boomerang shaped birds circling, vocalizing, wings flickering in the light. They’d beat hard, glide, beat hard, glide, disappear then reappear as they completed large circuits.

I recognized their small, blunt bodies and curved, stiff wings—chimney swifts—but where had they come from? They are considered near threatened; declining, it is said, as suitable old-fashioned chimneys and other tall human-built tower-like structures disappear. Yet there they were. 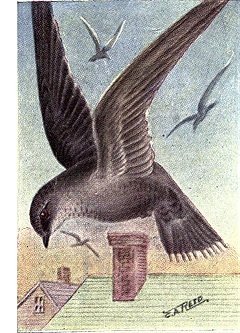 The Norway maple in our yard was the next neighborhood tree to fall, a year later, due to a storm. The sky expanded again. I began to go out on purpose just to see the swifts in all the varieties of evening light. On flat overcast evenings they fly like dark shadows against the gray. Watching their patterned flight, you can better understand the way they curve on their sweeping individual arcs, sometimes in tandem, sometimes criss-crossing. What laws, what factors, what complex equations account for these behaviors? Curves upon curves, never quite repeating. They don’t appear to swoop much on the vertical, perhaps because they are so high that perspective flattens out.

If I watch the swifts for a bit my gaze sometimes moves to deep focus, noting on Turner-esque evenings how low, dark clouds form and roil slowly southeast across the lit up icy gossamer high above; but then the swifts sink to perhaps forty feet up, calling my attention back, clean-lined forms sharp against the smudgy turmoil. These things seem important to notice. Do they take any account of a person like me sitting far below or boys shooting baskets in the alley, as they look all about with their far-sighted eyes, sharp as any hawk’s? They never come to earth, will never be familiar in the way of the goldfinch, robin, or chickadee; they are our Midwestern version of the seabirds that sailors only see in silhouette, who never come to land. Where have the swifts I see found to nest?

A hundred years ago, before there were houses, my neighborhood was a wet prairie just outside the Chicago border. Silver maples are an early successional species of lowlands, quick to colonize when fire is suppressed, easy to let grow in the bare new backyards of the time. This year, in yet another storm, a silver maple across the alley lost a limb nearly as big as some of our neighborhood trees, opening another window on the sky. On a cloudless evening, when the light from the setting sun leaks from behind miles and miles of buildings to the west, the swifts present a different aspect: Look! You can see their wings flashing, you can see their pale throats glimmering, and then you notice how distinct from the deepening blue of the sky is the color of the air. They pull that illumination toward you, angle it down into the yard so the blooming phlox, zinnias, and cup plants glow; and when I sit outside on mild evenings like this, as gloaming turns to deeper dusk and fireflies appear, I linger on and on, knowing I should probably go inside, just not quite yet.