Tea with an Owl in Tokyo 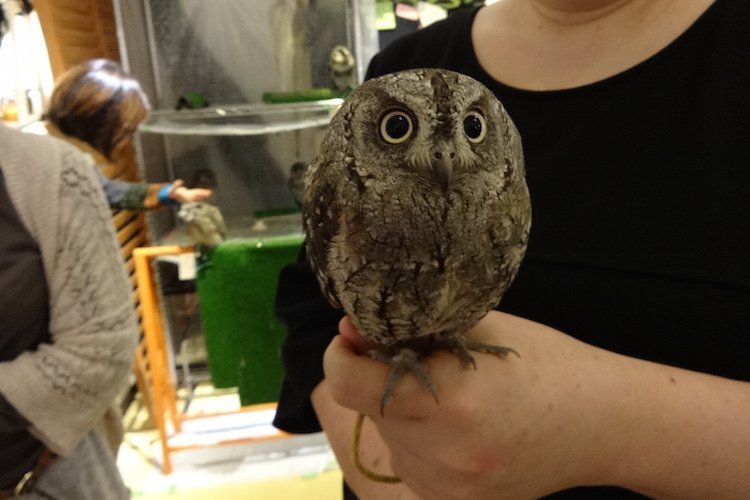 “Owl cafe.” It’s such an odd combination of words, it might sound like some kind of autocorrect error. But it’s a real thing—I’ve been to more than one, and they’ve given me a lot to think about.

I’ve been spending a couple of weeks in Tokyo every year for a while now. I go partly as a vacation and partly for writing purposes, with the work giving me excuses to go places and ask questions I might not otherwise. I love the food, the language, the trains, the culture. But I’m also an animal geek, so of course, wherever I go, I visit the animal attractions. Tokyo has several zoos and there are so many aquariums that in five years I still haven’t made it to all of them. But in addition to these familiar attractions, Japan also offers establishments that to an American are truly foreign: animal cafes.

Probably you’ve heard of cat cafes. You pay for an experience that’s a lot like having a cat at home: you sit in your living room with a nice beverage and the cat mostly ignores you. But there increasingly are also cafes in Japan with more or less exotic animals—rabbits, reptiles, hedgehogs … and, perhaps most surprising, owls. 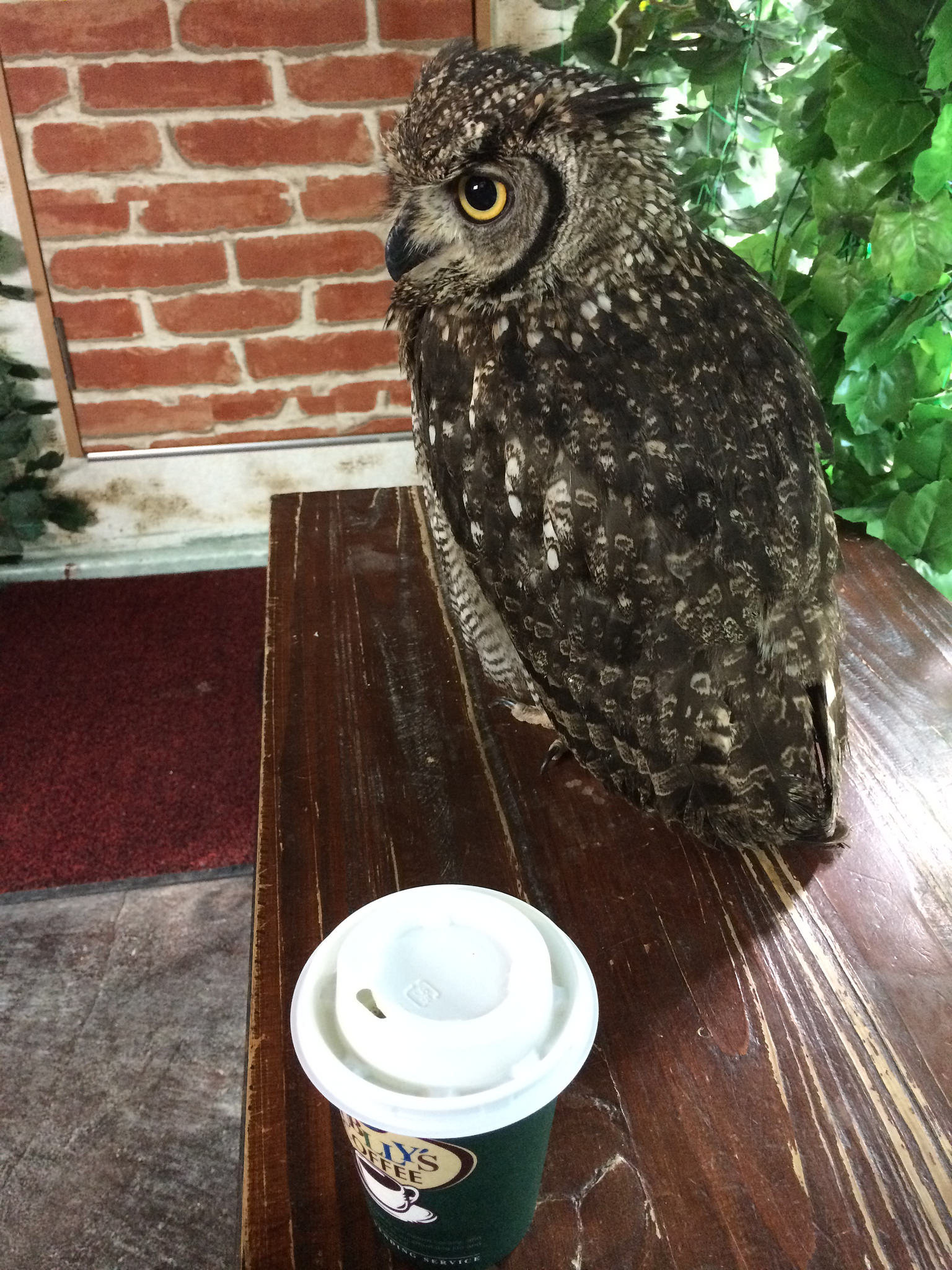 The kind of interaction you have at different owl cafes can vary. At one well-known owl cafe, Fukuro no Mise, in Tsukishima, you make a reservation for a defined block of time. When you arrive—and if you’re late, you’re out of luck—everyone sits down and listens to a lecture and demonstration about owls and how to safely handle them. Then you get to hold an owl on your arm. The staff circulates around the room, making sure everyone performs this action correctly. If the owl is flapping about uncomfortably, you’re not, and they reposition your arm (somewhat sternly, if they need to do it more than once–don’t ask me how I know). At another, Jungle Café, in Asakusa, you can drop in any time and the owls mainly stay on their perches, with a couple hopping around the room. A staff member will occasionally bring an owl to you that doesn’t mind being touched and explain how to gently pet only the back of its neck with the back of a finger.

(The food aspect of these cafes, by the way, is usually nominal—a cup of something, served after the owl-handling has concluded, or access to a couple of the typically elaborate Japanese drink vending machines.) 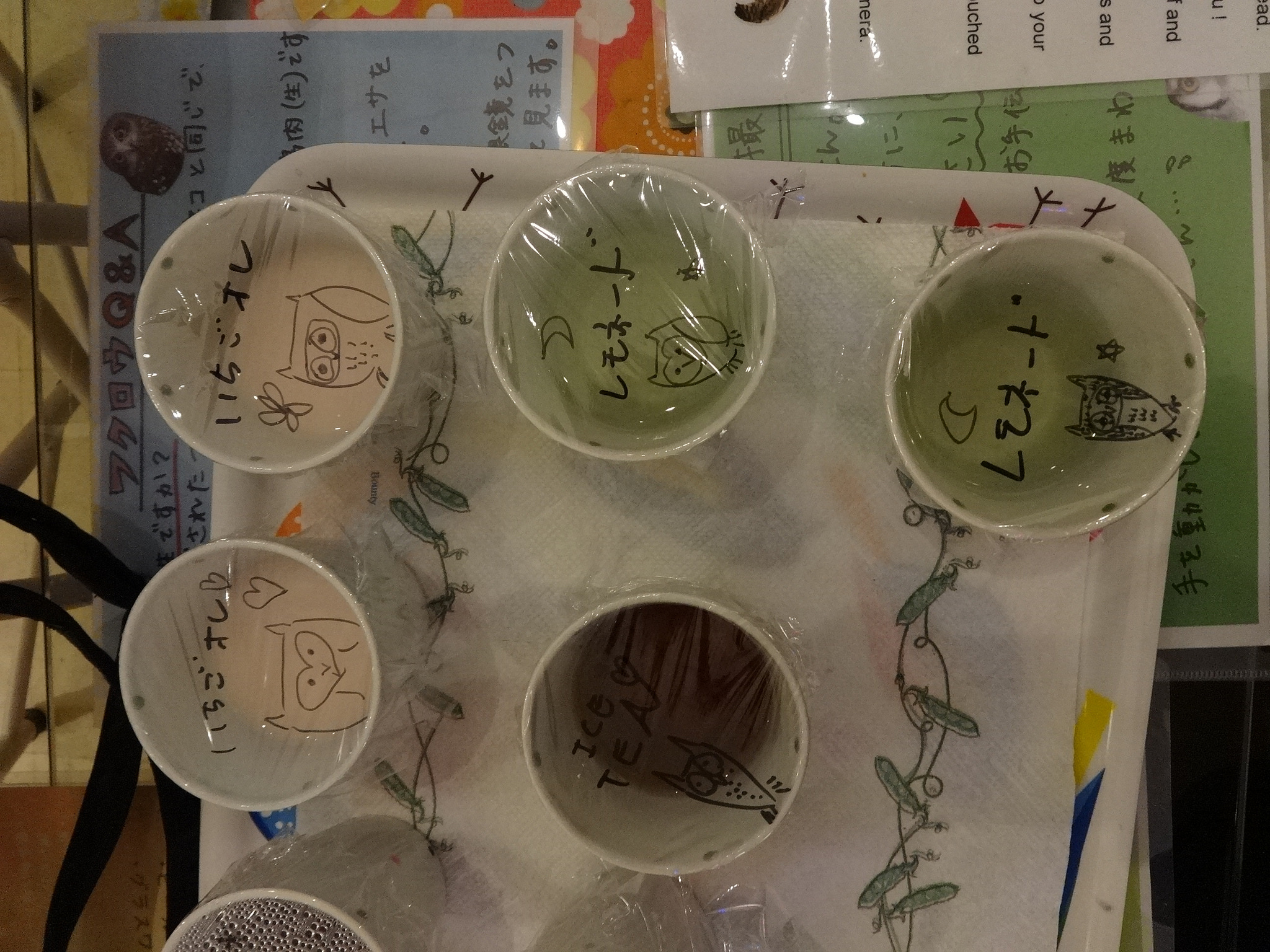 It should be clear that this is a very first world experience—we’re not talking about endangered animals snared from the jungle and passed around as photo props. These are clean, odor-free, well-kept city shops where the priority is to hold your arm the way the owl prefers even if another position would make a better photo. As someone who has worked as a zookeeper, I think I have a decent basis on which to judge whether the animals are doing well in places like this; as a writer, I wouldn’t publicize one that I thought was abusive. I occasionally do see something in an animal cafe that I am not 100% comfortable with, but on the whole I haven’t seen serious problems. 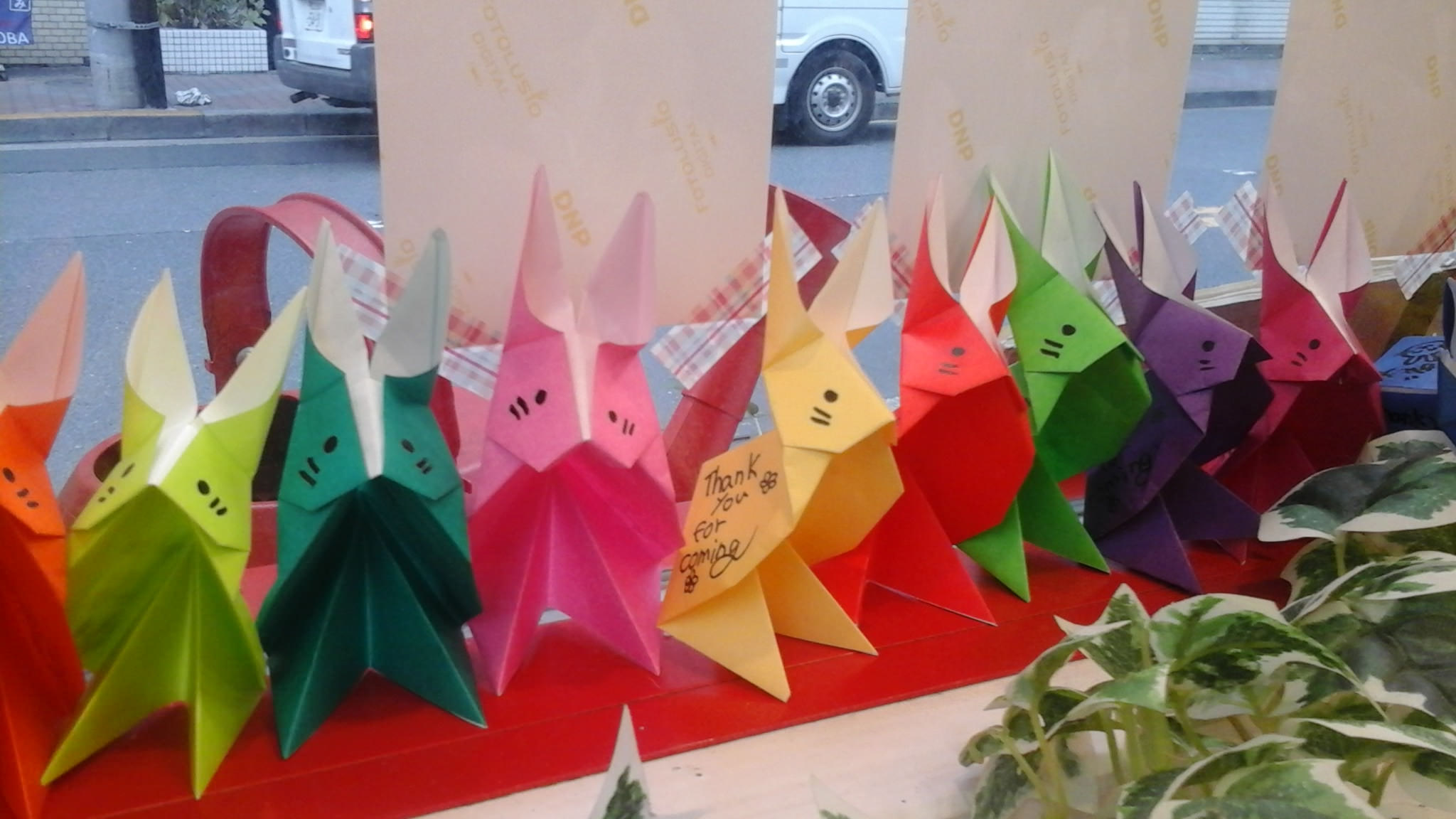 At a rabbit cafe I visited, for example, a patron could pay an extra charge for a private room and then would be left unsupervised with his or her choice of rabbit. Personally I wouldn’t trust the general public enough to do that, especially because rabbits are not generally crazy about cuddling. But it’s probably fair to say that my experience of the general public at the zoo makes me more skeptical than most people. At the last owl cafe I went to, there were a couple of different kinds of mammals in small cages, and I wondered whether they were allowed out to run around sometimes. Unfortunately, neither my Japanese nor the staff’s English was up to the discussion. But I was willing to give them the benefit of the doubt because what I did see was that the animals looked healthy, the owls that didn’t like handling were not handled, and that their perches were clearly labeled “Do Not Touch” in more than one language.

Petting zoos are perhaps the closest parallel Americans have to Japanese animal cafes. However, petting zoos are primarily intended for kids, while Japanese cafes are geared towards adults. Western writers generally explain the existence of these cafes by observing that in Tokyo many people live in small apartments that don’t allow pets. But people in lots of other cities live in small apartments that don’t allow pets. So why isn’t, say, New York City full of owl cafes? In my view, this absence has nothing to do with real estate, and it’s not that New Yorkers don’t like animals and Japanese do. The difference is that animal cafes defy most Americans’ conventional wisdom about how people should interact with other animals. There tends to be an automatic, knee-jerk reaction that these cafes must be bad for animal welfare (this is clear from negative comments posted on articles that I’ve written about them).

This objection is partly because some people believe that any kind of animal captivity is bad. I faced this bias when I worked as a zookeeper, despite evidence that the majority of animals live longer, healthier lives in zoos, where they have regular medical care and don’t have to struggle for territory, to find food, and to avoid becoming food. We’ll have to agree to differ on that. What I find more troubling is how many people assume, pretty much unthinkingly, that it’s harmful for animals to interact closely with people. We have a tendency to define nature and humans as opposites instead of understanding humans as part of nature. While we live in a rapidly urbanizing world where learning to coexist is becoming more and more important, separation between humans and wild creatures seems increasingly accepted as the ideal.

My experiences in these cafes and the American reactions to their existence highlight the fact that we all have assumptions, often unexamined ones, about appropriate forms of human interaction with other animals. Exotic animal cafes remain taboo in the United States, and even the idea of public spaces with domesticated species is fraught. A few cat cafes now exist in the United States, but they are associated with animal rescue organizations and the cats are available for adoption. This constant cycling of different animals, instead of letting them settle down to live long-term with known comrades, presents its own set of animal welfare concerns. But here, presenting them as adoption centers is the only socially acceptable way to have cat cafes, whether it’s actually better for the cats or not. 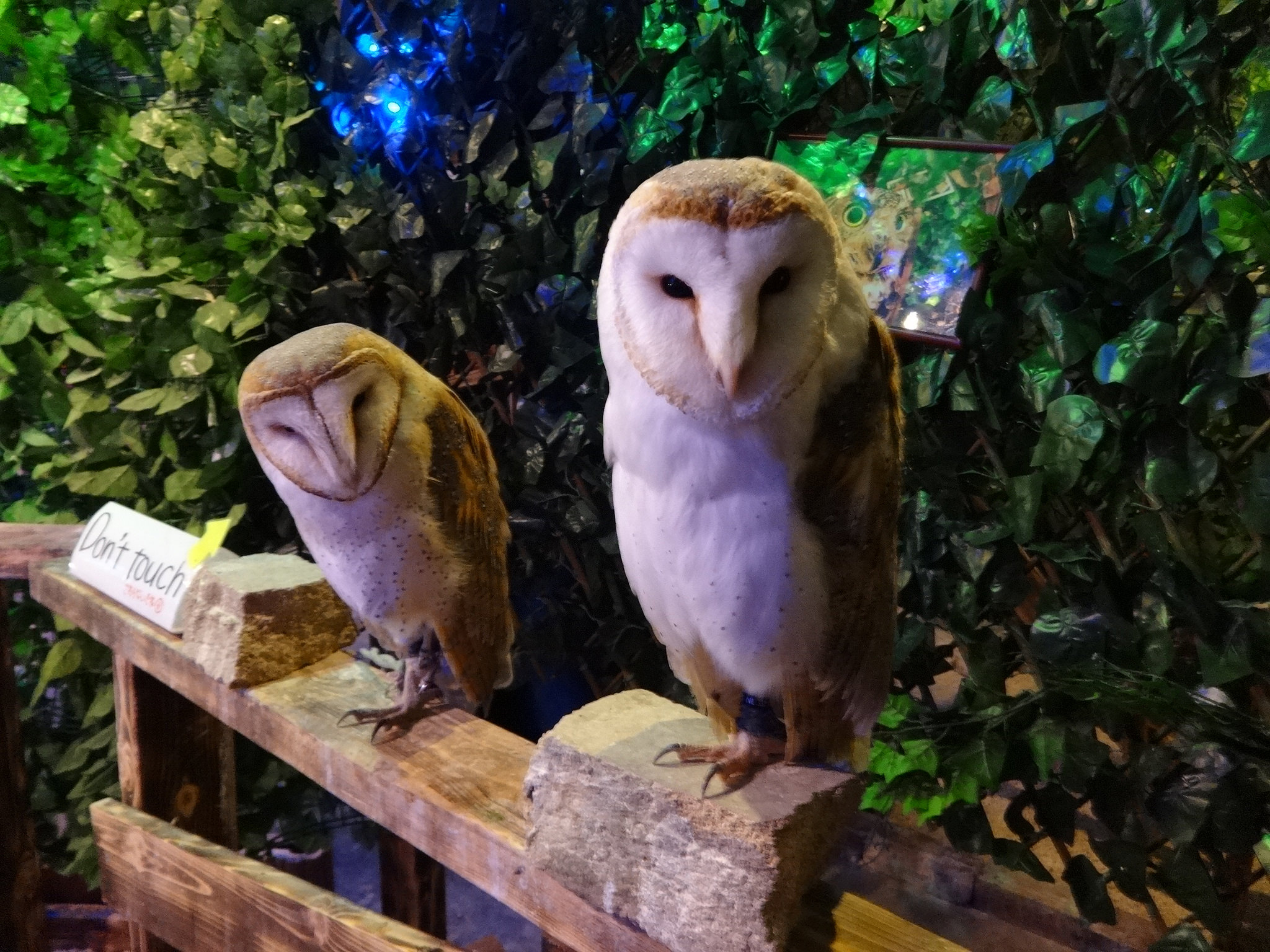 I don’t expect we’ll ever have owl cafes in the United States. I don’t know that we should. I do know that no matter where they live, people want and, for the sake of psychological wellbeing, may even need to be near animals. Maybe if people had regular exposure as well as more controlled interactions that included an educational component, they’d be less likely to endanger themselves (and other animals) by taking selfies in the wild. Animal cafes—provided that they offer healthy lives for the species in their care—might be an entry point or a reminder to urban dwellers that it’s a big, shared world outside the cafe doors.