The Earth is asking humanity to evolve more rapidly to become conscious, compassionate, collaborative, co-intelligent and co-creative if we, as a species, are to survive on Earth.

If humans are not able to do evolve rapidly, they will become the first species to self-destruct, along with destroying many other species, and a magnificent biosphere that took billions of years to create. The Earth is now asking us to evolve rapidly to become a wise species, so our nuclear, chemical, and biological weapons do not become the end of us.

The Earth is now asking us to grow in heart and compassion to match our advancement in science and technology. We now call this emotional and social intelligence. For thousands of years, religions called this kindness, love, charity, forgiveness, mercy, peace, harmlessness, selfless-service, unity, oneness.

This call of the Earth has been growing louder for the past 60 years…  I heard it clearly through two teachers of mine, Thomas Berry and Robert Muller.

In the late 1970s, I first learned of Thomas Berry when I attended a talk by Robert Muller at the Teilhard Society for the Future of Man Tom hosted at the Riverdale Center for Religious Research.  Robert became a mentor and dear friend for 30 years of his 60 year career with the United Nations, including his working with five Secretary-Generals, creating 22 specialized UN agencies, and co-founding the United Nations University for Peace.   In the early 1980s, working at Planetary Citizens across from the UN in New York City, I then met with Tom Berry several times over a three-year period for Universal Children’s Gardens I had founded, which he said was the most beautiful program on the planet. He became an honorary board member of UCG. Our motto was “Growing food, flowers, trees, peace hope and love.” UCG lasted from 1979 to 1985, affiliating 135 children’s gardens in 17 nations.

Today in 2016, as a global and local organizer, drawing on the wisdom of Thomas Berry and Robert Muller, I hear the call and see the need to create an annual Sacred Earth Conference with the participants of the Center for Humans and Nature that would be an alternative to the annual G20 summit.   “In my view, after fifty years of service in the United National system, I perceive the utmost urgency and absolute necessity for proper Earth government. There is no shadow of a doubt that the present political and economic systems are no longer appropriate and will lead to the end of life evolution on this planet. We must therefore absolutely and urgently look for new ways.” -Robert Muller, former UN Assistant Secretary General Co-Founder of the UN University for Peace

“The Earth, with its layers of land and water and air, provides the space within which all living things are nurtured and the context within which humans attain their identity. If in the excitement of a secular technology, reverence for the Earth has diminished in the past, especially in the western world, humans now experience a sudden shock at the devastation they have wrought on their own habitation.
The ancient human-Earth relationship must be recovered in a new context, in its mystical as well as in its physical functioning. There is need for awareness that the mountains and rivers and all living things, the sky and its sun and moon and clouds all constitute a healing, sustaining sacred presence for humans which they need as much for their psychic integrity as for their physical nourishment.
This presence whether experienced as Allah, as Atman, as Sunyata, or as the Buddha-nature or as Bodhisattva; whether as Tao or as the One or as the Divine Feminine, is the atmosphere in which humans breathe deepest, and without which, they eventually suffocate.” -Thomas Berry

Based on first telling “The Story of the Universe,” we need to build a process for the recovery of a sense of sacredness for our beautiful and beloved planet Earth. We need an Annual Sacred Earth Conference, supported by an organizational structure that can support the work using a process I call C5 ~ Consciousness, Compassion, Collaboration, Co-Intelligence and Co-Creativity.  We also need to create ongoing participatory committees (working group structure) for contributors to support the co-evolution of consciousness and collaboration of humanity and the Earth. Successful movements are based on five phase of development. The Annual Sacred Earth Conference and ongoing Committees are a natural structural extension, growing out of the “The Story of the Universe.” 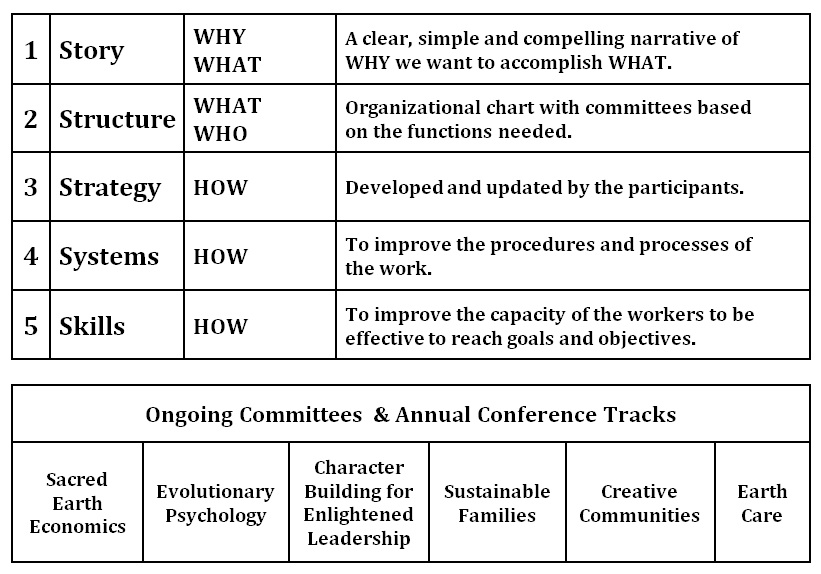 I look forward to working with people interested in the development of an Annual Sacred Earth Conference and ongoing Committees.

The Earth asks us to go beyond what is… to be brave and bold… to tell the story, build the new structures for organizing… strategize wisely… create new systems… and train ourselves in new ways of teaching consciousness, compassion, collaboration, co-intelligence and co-creativity so we may survive and thrive on our beautiful and sacred home in the universe.

_________________
Sanford Hinden provides development consulting for organizations, is a global project developer and local community organizer.  He is also a workshop leader and coach in personal growth, interpersonal communication and relationships.  He presents educational programs to help individuals, couples, families and organizations realize their full-potential.  Sandy served in United Nations related Non-Governmental Organization work for 23 years and with the Dix Hills Performing Arts Center as Executive Director for over 12 years.  He has worked in education, health and human services, the arts, the environment, peace-building, government and business.  He was given an Outstanding Advocate for the Arts Award by the Long Island Arts Council and wrote 7 Keys to Love ~ Opening Love’s Door to Joy & Well-being.  Sandy graduated with a BA in Psychology with honors, Queens College, City University of New York with a second major in Interpersonal Relations and Group Facilitation.  He has extensive studies and experience with: Mindfulness Meditation, Anger Management, Emotional Release Work, Dealing with Difficult People, Assertiveness Training, Conflict Resolution, Negotiations, Couples Communication, Compassionate Communication, Co-Counseling, Effective Customer Service, Organizational Development and Community Development.