The Artist Who Would Be a Crow 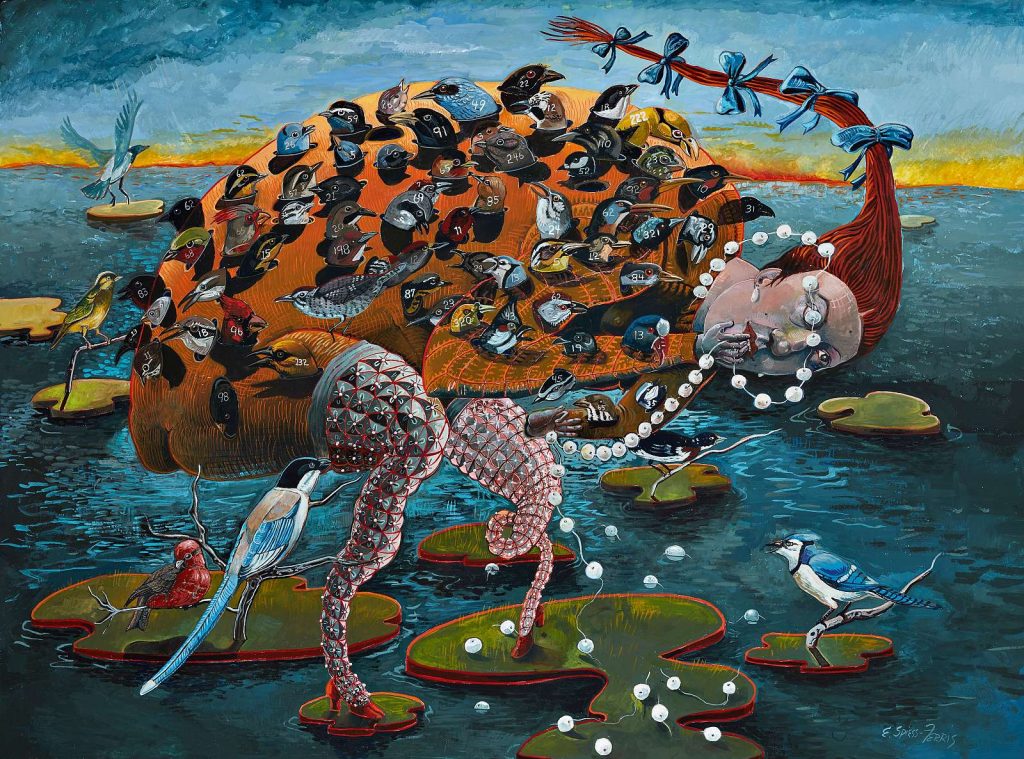 A few years ago I went to visit artist Eleanor Spiess-Ferris, along with her partner Umberto Tosi, in her Rogers Park (Chicago) home. I came without a preconceived plan. Fascinated by her work, I just wanted to hear a bit more of her story: what led her to paint the richly surreal canvases that looked to me like dreamscapes (she would assure me they are not dreams), why are animals (especially birds, and native birds at that) such prominent figures in her art, and how may visual art be a form of storytelling?

“Do you want the truth or the fiction?” Eleanor asks me, her eyes twinkling in response to my question about the numbered birds that frequently find their way into her paintings (see “Pond Reflection” below). I opt for fiction first, though I get to hear both answers. After I know that the numbers are simply page references from field guides to help her keep track of avian images, I understand that she is right, “That’s the truth but that’s not as much fun as the fiction.”

Fiction, myth, storytelling—these create a distinctive alchemy in Eleanor’s work. When I first saw Eleanor’s paintings, I was drawn to their unsettling beauty; they struck me as warped versions of something I couldn’t quite put a finger on or name directly. Still-life dreams. When I ask about this, though—whether the paintings come to her fully formed in dreams—she categorically denies it, saying she doesn’t know where exactly they come from, except that they originate in “a twilight space.” For her, the imaginative work begins with an object—say, a cup—that is then manipulated or elaborated, stretched and tugged upon, until it becomes a hat, a cone, an ark. This is a way of unfolding herself to the presence of what is there, listening for otherworldly voices that lure her forth: “The more open you are—the more doors you open—you find out what’s behind those doors.”

This exploration, the opening of doors, results in a never-finished storytelling. Eleanor explained: “My stories are in my painting, but they’re not my stories. My stories brought them into fruition, but your stories, or the viewer’s stories, finishes it. What I put in is mine, but it is not necessarily yours. …Is there nothing worse in the world than to go to an art show and have someone tell you what you’re looking at? A thinking person wants to bring themselves to that piece. The minute I found out what [Pablo Picasso’s] ‘Guernica’ was about, I stopped being interested.”

So, frequently Eleanor plays both the narrator and the audience, telling herself stories as she paints, creating the narrative thread out of the physical mediums of oil, powdered graphite, and gouache. The subject matter of her work traces back to a wild apple and plum orchard in northern New Mexico, where her family moved when she was still a little girl.  Eleanor was the fourth and youngest child in her family, and she was given the freedom to wander through the jungle of trees, explore the barn at her leisure, and befriend the chickens. “I think that my mother had had enough,” Eleanor chuckled, “so she taught me how to open the screen door.” Out the door she went, meeting magpies and redwing blackbirds, riding her “old, lazy” Palomino horse Snake, and exploring the orchard.

Pointing around the room at her paintings lining the walls, she tells me, “All of these paintings are basically about women, and basically about the women of the orchard or mother nature or something like that. They’re archetypal.” I wonder aloud if she looks at painting as a means for tapping into those childhood experiences in the orchard. “I’m still there,” she corrects me. “I haven’t tapped back at all. …I suppose it’s a refuge—a place of origin, good and bad.”

Adventuring alone as a child afforded her the opportunity to spend a great deal of time thinking outside, reflecting on animals, and death in particular. Animals, especially birds, populate Eleanor’s works in abundance. With so many avian eyes, her work frequently assumes a reflective quality, sometimes a literal one, such as in “Pond Reflection.”  The piece suggests that not only are other animals a part of human consciousness, embedded in our thoughts, but that they confront us directly with their presences. Look long enough at “Pond Reflection” and you’ll see that you are being watched as well.

When I remark on the element of contemplation—about animals reflecting ourselves back to us and causing us to see ourselves differently—Eleanor tells me, “I don’t think living creatures are very different from one another, in the first place. We just happen to build our homes out of brick and mortar and they build their homes out of something else. We happen to do high mathematics but they know how to climb on those [telephone] wires much better than we do. Everything operates within its universe. If you watch other creatures, just like you’d watch people, you can see yourself reflected in them.” Pressing this further, she continues, “My question is: Do they see themselves reflected in us? I don’t know. Or are we hindrance to them? Are they sitting there praying to their mother goddess that happens to look an awful lot like a squirrel, wishing for the humans to die of some dreaded disease?” She laughed heartily at this thought, then added, “Or leave our windows open and go away?”

Eleanor suspects that the animals in the city “know what we’re doing much more than we know what they’re doing.”

Under the influence of Hieronymus Bosch, Eleanor started drawing birds “many, many years ago.” But there’s one particular bird, a common resident of Chicago, that has captured her attention most. “Crows always will talk to me. My totem is the crow. And I’ve often said I’d like my totem to be a raven, but it can’t be, it has to be a crow because a raven is real powerful.” She paused, then chuckled, “And I’m just a crow, a crow that would like to be a raven.” She expresses her admiration for the crow: its cleverness, its Trickster persona in Native and Celtic mythology, its talents as a messenger bird, but perhaps most of all, she’s attracted to the shadowy qualities of crows—qualities she finds far more interesting than notions of homogeneity or purity. “The crow is also a symbol of uterine darkness, it’s a creator, but in many cultures it’s also a death scavenger, so it has that duality. I love the duality of things, so that’s why I love the crow.”

A work like “Eye Candy” is one of Eleanor’s “revenge pictures, where the animals get revenge for human misbehavior.” Although in this case, she told me that she cut the woman in the picture a break, providing her with a plant (Datura wrightii, also known as “Angel Trumpet”) to numb her pain, if she so chooses.

Though sometimes shrouded in shadow, the themes of Eleanor’s work are not focused exclusively on imagined doom. Characteristic of her totem, the crow, there’s something more ambiguous at work. In a painting like “Making Pond,” for instance, a red-haired woman weeps, but her tears create life-giving habitat. Young life grows, cradled in the tangles of her hair.

Eleanor explains: “This painting has to do with grief, and out of grief comes creativity. Grief is not just totally bad—something comes out of that. And she creates the pond by crying into the pond, and she creates the environment in which the birds and things can exist through her grief. She’s an ecosystem. And she cries and will forever cry, because she has grief, but within her grief comes life.”

Similar themes of gathering animals together, connection through contrition, and purification through grief are evident in many of Eleanor’s works, such as “Tears.”

If there is a cautionary aura to many of Eleanor’s pieces, it’s because she considers the fate of humans to be intertwined—for better and worse, in life and death—with the worlds of other animals. “Well, we’re all one thing,” she tells me. “If we don’t wake up and realize that we’re all interconnected—I mean I don’t like this old Biblical thing where we have dominion over the animals. I’m sorry, excuse me, who gave us that thought—that we have dominion over anything?” She prefers “caretakers” as the proper descriptor.

The theme of caretaking strongly transmits in some of my favorite of her pieces. There is a guarded optimism in the organic intertwining of human and nonhuman life, in which heads become lifeboats, thoughts become branches filled with song and chatter, and bodies are pierced and reaggregated into something greater than their parts. A painting such as “Island II” feels straightforward: “if you think about it, you can be the refuge to the birds.”

With open senses, the city becomes a place of fragile abundance, familiar kinship, and twilight otherness.

As I finished off a piece of carrot cake and readied myself to go, Eleanor and I discussed the misleading dichotomy between urbanity and wildness; cemeteries with foxes, golf courses with opossums, coyotes between the condominiums. “You don’t have to have an orchard,” she says, referring to her magical place of childhood adventure. “You can go out your backdoor. …You just have to be aware that you’re living with all these creatures.”  Her work brings these other worlds into focus, even as it throws a playful elbow in your side to keep you off-kilter.

“To preserve the element of mystery is important to you?” I ask Eleanor. The Trickster Crow across the table from me answers without hesitation, “Right—and what are animals out there but mystery?”

*Images used with the permission of Eleanor Spiess-Ferris. A great many of Eleanor’s current and archived works, including the images used here, can be found on her website: http://eleanorspiess-ferris.com/

In 2019 the Illinois State Museum in Springfield, Illinois will present a retrospective exhibition of her work.  In 2020 a portion of the exhibit will travel to the Evanston Art Center, where Eleanor teaches drawing and painting.