The Country-City of Creaturely Soundscapes 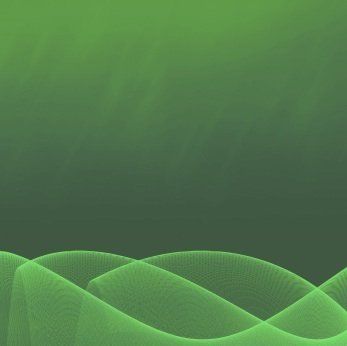 As someone who often gives priority to the visual, I used to think of sitting with my eyes closed as something akin to a sensory “rest stop.”  But when I actually started to take the more meditative step of also turning off the picture show that usually runs in my mind’s eye, I began to discover a whole other sensory world I was neglecting. The city is filled with summer sounds now—thunder, birds, fireworks, barking dogs, crickets, sirens, the pining of “dog day” cicadas. If we were to tune into these sounds, we might find that each season presents a unique kind of emergent orchestration that can only be described as a “soundscape.”

I myself am an amateur when it comes to listening to such things, but I can tell you that: (1) apparently the term “soundscape” has a technical meaning in addition to its pleasantly evocative one, and (2) I love the cover of a 1978 book called The Handbook for Acoustic Ecology by Barry Traux. It is No. 5 in the Music of the Environment Series (which was part of something called the World Soundscape Project), and it contains a beautiful graph that helps us visualize a soundscape—in this case on the west coast of British Columbia—with a squiggly sort of precision. 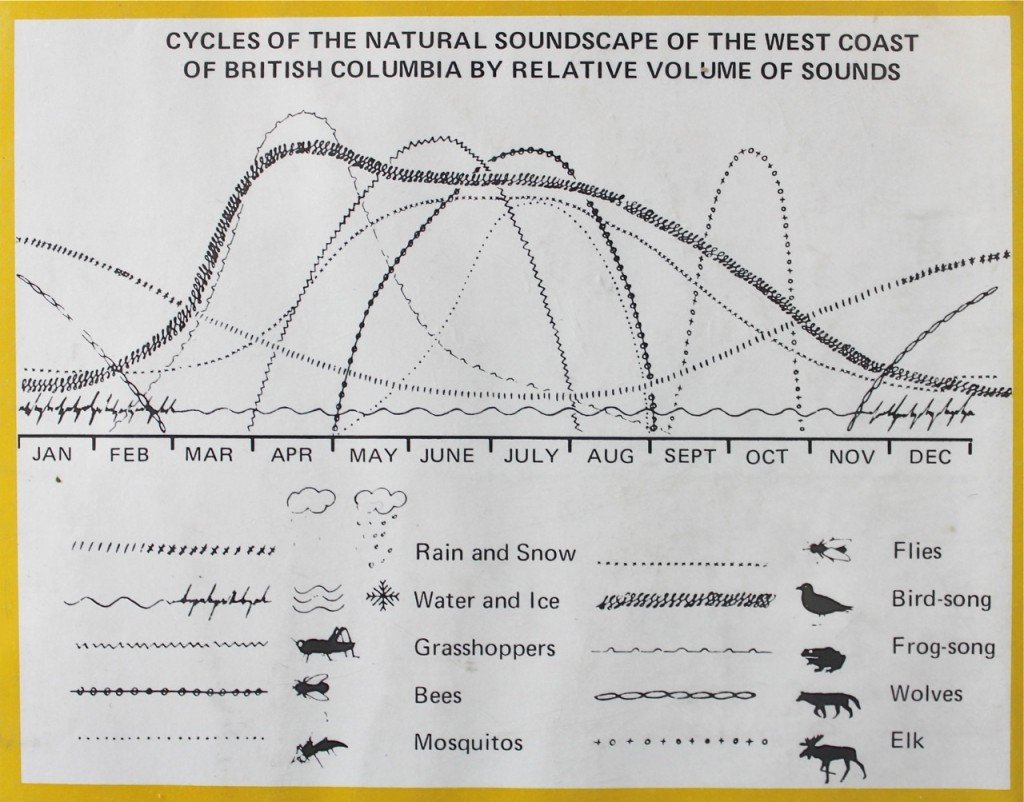 It is wonderful to think about the different sounds in this particular Canadian locale, like the seasonally transmutating category of  “water and ice.” The graph also shows that the buzzing of the bees and the tromping (or bugling) of the elk don’t end up overlapping in time, which is a shame, but at least the beginning of May allows for the chance to hear grasshoppers, frogs, and birds all singing at once. Do different animals get distracted or annoyed when everyone is singing at the same time? In some cases, perhaps. Though it might be that there are frequencies some species don’t bother listening to or that they are physically unable to hear. If a barn full of bats were chirping and twittering along in the dusky evening in British Columbia, would I even know? Since humans aren’t equipped for ultrasonic frequencies, I’d be hard pressed to say. As far as my remedial human ears are concerned, it isn’t part of the landscape or the graph.

But what I can hear is often an earful. Early in August, I was lucky to spend some nights on a 115-acre preserve on Lake Michigan. As I listened to five different songs, the only auditory sign of human presence was my own heartbeat. An acoustic slice:

As nice as that sonic fruit may taste, though, there are equally fascinating sounds that permeate the air of my more daily life on the northside of Chicago. At this time of year, I enjoy the cacophony of male cicadas and their high, rhythmic and whir/whining choruses that beckon for a love, or at least a mate. The cicadas’ calls meld with a host of other sounds into a Chicago soundscape that is heavy on humanity, which has its own special noises.

Special in what way? One thing I notice is how our sounds are so characteristically those of coming and going. Cicadas might fly a few hundred feet in their whole adults lives, or perhaps not move at all from the tree on which they stake lovers’ claims. The sounds that seem to define humans are those of intentional movement, a hither and thither of things like shoes and subways. This constant movement may be the defining feature of cities.

My mind is sometimes a reflection of this motion, and I must be intentional about calming its hither and thither as I walk home from work and take in the summer sonicity. I recently decided to make a recording of one of these walks to see how the human/cicada duet unfolds. Both partners seem to lay heavy on power chords in late August, with humans keen on the percussion:

This duet reminds me of another wonderful insect soundscape that made its way from Ecuador to my Illinois ears (thanks to NPR).  Such recordings feel so immersive to me that I’ve begun to reconsider my pre-occupation with the visual. The biologist Tom Fleischner said that “Natural history is the process of falling in love with the world.” For me, part of natural history is falling in love with voices, too. Soundscapes are a powerful way to be attuned to the voice of the places in which I find myself, as well as tap into some small part of those places I might only hope to go.