The Dawning of De-extinction Raises Many Questions

Recent attention-grabbing headlines about the possibility of resurrecting extinct species should prompt the conservation community to reexamine several key issues:

Extinction is often defined succinctly as the death of the last individual of a species, and it has always been regarded as irreversible. But, we must now acknowledge an expanding “gray area” in which this simple, traditional definition may be insufficient. There are now several ways a species might be resurrected after the last living individual dies.

Some wild ancestors of domestic forms have gone extinct, but their domesticated descendants presumably contain some or all of the genetic material inherited from the extinct ancestor. Selective breeding for the “wild” type could recreate individuals that are similar to the extinct wild species. Such selective breeding experiments are already underway in an attempt to resurrect the Auroch (Bos primigenius), our domestic cattle’s wild ancestor that went extinct in 1627. Since 2008, the selective breeding program has already produced individuals that are remarkably similar in many ways to the Auroch and might be regarded as a step toward resurrecting the extinct bovine.

We know that for some plants, dormant seeds can remain viable for long periods of time, in some cases long enough for the species to have become extinct in the sense that no mature individuals remain. Ancient seeds of an arctic flower, the Narrow-leafed Campion (Silene stenophylla), were recently discovered buried deep in permafrost. Radiocarbon dated at 32,000 years, the seeds still contained viable embryos that were extracted and grown in vitro (in test tubes). The resulting plants flowered and created viable seeds of their own. Today, 10,485 plant species are categorized as “threatened” on the International Union for Conservation of Nature (IUCN) Red List. Many of those species will undoubtedly become extinct (in the traditional sense) in the near future, but for some of these threatened species, seeds have been carefully preserved in seed banks, such as the ambitious Millennium Seed Bank Partnership. After no living individuals of those plants remain, the preserved seeds could potentially be germinated, resulting in a de-extinction. 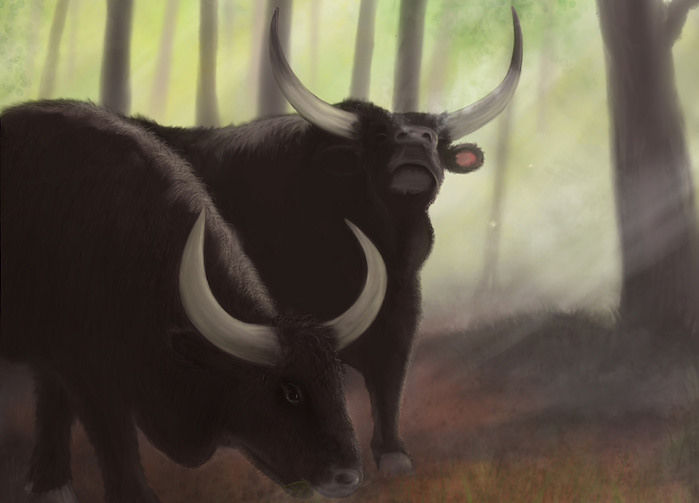 Similarly, in recent decades, gametes (eggs and sperm) of some critically endangered animals have been cryopreserved in “frozen zoos.” In the event that some of these creatures become extinct (in the traditional sense), those cryopreserved gametes could be used for in vitro fertilization, with the resulting embryos implanted in a closely related surrogate species that would carry them to term. This sequence of now-routine procedures has already been carried out with extant animals and could be used to resurrect an extinct species in the future.

Although more technically challenging, the advent of cloning has prompted the careful preservation of non-reproductive cells of some critically endangered species. After the last living individual dies, the preserved cells could be cloned to produce new individuals. Such a cloning experiment has already been attempted with the extinct Pyrenean ibex (Capra pyrenaica pyrenaica). Cells of the last surviving individual, a female named Celia, were cryopreserved and cloned after her death. The resulting embryos were implanted in domestic goat surrogates, and one birth resulted. Although that individual died shortly after birth, the demonstration of the feasibility of the procedure will encourage other attempts to use cloning to resurrect extinct species.

Finally, the advent of synthetic biology has opened the possibility of transforming the science fiction of Jurassic Park into real science. Cutting edge biotechnology makes it feasible to recover fragments of degraded “ancient DNA” from less-than-ideally-preserved specimens of extinct species. Those recovered fragments of DNA could potentially be used to genetically engineer the genome of a closely related extant species. The extensively altered genome might produce an organism with some combination of genetic traits of both the extinct form and the extant form. The process remains speculative at this time. Recent hype has focused on resurrecting charismatic organisms, such as the Wooly Mammoth (Mammuthus primigenius) and Passenger Pigeon (Ectopistes migratorius), by combining their recovered ancient DNA with DNA of the Asian Elephant (Elephas maximus) and the Band-tailed Pigeon (Patagioenas fasciata), respectively. But even if these futuristic experiments were to succeed, the resulting organism would be a novel life form, not the extinct species.

Among these already feasible and futuristic ways to resurrect an extinct species, there is a gradient of perceived “naturalness” that suggests how we undertake a de-extinction may matter when deciding whether or not to proceed. Selective breeding, germinating preserved seeds, in vitro fertilization, and even cloning would result in resurrected individuals that are genetically identical to the extinct species, whereas the synthetic biology approach would result in a novel organism with a highly edited genome that only partially resembles the genome of the extinct species. Some proponents of de-extinction seem unconcerned about how it might be done, whereas skeptics see thresholds of acceptability that make some procedures problematic and even objectionable.

Assuming that some or all of these de-extinction procedures may allow us to resurrect an extinct species (or something resembling one), decisions about which species to resurrect remain. Already, several criteria seem reasonable and more formal guidelines are likely to be forthcoming. Current general thoughts include:

Among the science-based questions to be considered for de-extinction are: Have the past causes of the extinction of a candidate been identified and addressed? Can potential current and future threats to a candidate be identified and addressed? Are the complex needs of a candidate sufficiently well understood to ensure a viable existence? Is there enough suitable habitat for the species? Is there an acceptable risk of the resurrected species having a negative impact on species, communities, or the ecosystem of the recipient area? Is there an acceptable risk of pathogen-related negative impacts to the resurrected species and the recipient system? Will it be possible to remove or destroy resurrected and reintroduced individuals and their offspring in the event of unacceptable outcomes?

At the least, we may have to refine our simple, traditional definition of extinction to become much more nuanced. And the prospect of bringing back an extinct organism—something that hasn’t happened in the 3.8 billion years of life on Earth—should cause us to ponder, even more deeply, our troubled relationship with other living things. The technological wizardry of resurrecting a few charismatic, extinct creatures may simply distract us from the more urgent task of preserving the world’s dwindling biodiversity for future generations; and de-extinction’s potential contribution to that task pales in the face of the staggering rate at which we are causing extinctions.