The Driftless Area: Revealing Its Places and Peoples through Time 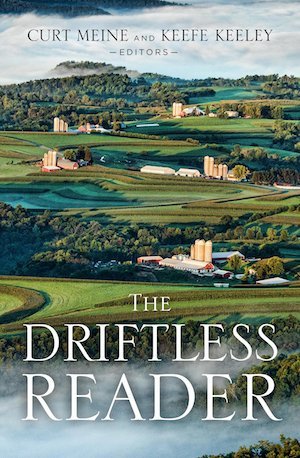 In The Driftless Reader, Curt Meine and Keefe Keeley have compiled a very useful account of the Driftless Region and its importance to Native Americans and later the European exploration, settlement, and ethnology, along with all that comes after. Meine is a conservation biologist and a widely acclaimed author and speaker; perhaps his best known works are Aldo Leopold: His Life and Work and Wallace Stegner and the Continental Vision. Keeley is the recently appointed executive director of the Savanna Institute in Madison. The institute is dedicated to “working with farmers on sustainable agro-ecosystems in the Upper Midwest.”

The term “driftless” denotes an area which has been geologically shaped during the past twelve thousand years in a dramatically different way than other parts of the Upper Midwest. Specifically, the Driftless Region was not ground down by glaciers nor cluttered with glacial debris, which created the more gently rolling terrain over much of the land elsewhere in the area. Rather, at the edge of the prairies, the Driftless Region features cliffs that drop away steeply into deep ravines. Caves are numerous in these bluffs, which were often used as shelters by native peoples. This same culture also created massive earthworks, known, in part, as the Effigy Mounds, extending across large areas of the Driftless.

Meine and Keeley, our guides on this exploratory excursion, have gathered and organized an enormous trove of information related to the Driftless Region. They bring together vignettes of the Driftless Area through time as seen by those who experienced living, working, playing, fighting, and dying in the region. In the Reader our authors reveal voices from the archeological past up to recent times. The book also includes recognition of the terrible forced deportations of native peoples from the Driftless into the newly opened western territories. 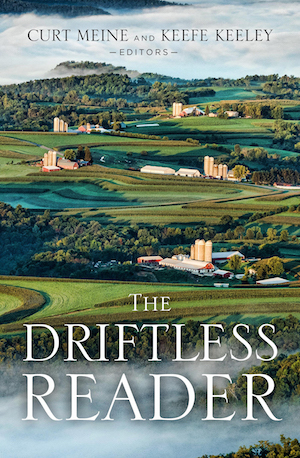 Compiling twelve thousand years of history is no easy task, but Meine and Keeley have configured an approach that reveals the human and natural landscapes. They use excerpts from government documents, scientific papers, maps, letters, newspaper articles, images, poetry, songs, interviews, descriptions of the daily lives of settlers, and more; clearly this has been a labor of love. Here is how our two compilers tamed such a mountain of information:

The Driftless Reader consists of several parts. A preface lets us know that “the Driftless landscape is by definition old, tough, and stable; yet it is fragile and subject to constant (and sometimes disruptive) change” (p. xxxii). Next are twelve chapters, the heart of the book, followed by sources and suggestions for further reading, and an index. The chapters are titled “Geological Origins,” “Ancient Peoples,” “Historical Ecologies,” “Native Voices,” “Explorations,” “Early Economies,” “Settler Stories,” “Farming Lives,” “Waterways,” “Conserving Lands,” “Communities in Transition,” and “Futures.” In each chapter the editors provide introductions framing the information.

Enriching the chapters are fifty-five illustrations that deepen our understanding of the people and the land. There are drawings or woodcuts, maps old and modern, and sixteen color plates—the earliest being “A Bird’s Eye View of the City of McGregor and North McGregor, Clayton County, Iowa 1869.” The most recent image is compiled (by Joshua Wachuta of Prairie du Chien’s Villa Louis) from geospatial data of a large portion of the Driftless Area. This gorgeous map appears in color on the cover. Altogether, the texts and illustrations make a rich collection of information, accessible to a novice while also useful to those already steeped in knowledge of the Driftless Region. The Reader is deeply edifying as well as being delightfully readable. No jargon here, just good English prose and a bit of poetry. Furthermore, the authors are careful to present the voices of both women and men, and of Native Americans along with persons of many other backgrounds and ethnicities. Bringing all this together constitutes a vast and extraordinarily useful achievement by Meine and Keeley.

Now, let us dive a bit deeper. The preface provides an essential introduction by the editors and concludes with a powerful admonition that “we can dwell on that which divides us, but we all dwell within landscapes that connect us. By listening deeply to the voices of our diverse places, we may find many ways home and many ways forward” (p. xxxiv).

Chapter 2, on ancient peoples, charts yet another pathway. An example from this section includes thoughtful poetry on the Effigy Mounds by Edna Meundt from 1963, followed by an excerpt from Twelve Millenia: Archeology of the Upper Mississippi River by James L. Theler and Robert Boszhart written in 2003.

Other especially noteworthy selections are excerpts from Henry David Thoreau’s “Notes on the Journey West” (1861); Mountain Wolf Woman, Sister of Crashing Thunder: The Autobiography of a Winnebago Woman (1961), edited by Nancy Oestrich Lurie and one of the first published biographies of a Native American woman; and the writings of Jacques Marquette, John Muir, Aldo Leopold, and Frank Lloyd Wright, among others. Robert Wolf’s concluding essay, “Postville, Iowa’s Entry into the Post-Modern,” shakes apart the dependable ways of the Iowa I knew in the 1950s. One senses that there may be the possibility of a thesis or two on almost every page.

Here is an experience of wonder and delight in at least two ways: “The most prominent geographic feature of the Driftless Area is the Mississippi canyon—a steep-sided, flat-bottomed gorge ranging from a mile to seven or eight miles in width, and gradually diminishing in depth southward from nearly 500 feet at the north line of the State to less than 200 feet at the tip of ‘Cromwell’s Nose,’ a rock outcrop on one of the Driftless cliffs” (p. 14). This was written in 1891 by William John McGee, a self-taught individual who grew up in the Driftless Region of Iowa and “became an eminent geologist, anthropologist, and ethnologist. He was for a time Director of the U. S. Bureau of American Ethnology, and served as president of three scholarly societies: the American Association for the Advancement of Science, the American Anthropological Association, and the National Geographic Society” (p. 14).

The previous story is one of hard work and success of a white person. The Reader also documents the success of former slaves and free black settlers who established several African American communities in the Driftless Area. The poet Fabu asks, “Who remembers that Black people came to Wisconsin to be free?” (p. 167).

The Driftless Reader documents the changing landscapes and the power to change the lives of the people in the landscapes, right up to the current moment. The urgency to do so is upon us. We are now in a time when understanding and honoring our ecosystems are crucial to our survival.

Let me close with an encouraging passage from the preface to the Reader: “Driftless residents have also pioneered new approaches to land protection and stewardship, community renewal, and economic resilience. Wendell Berry has suggested, ‘If you don’t know where you’re from, you’ll have a hard time saying where you’re going.’ Knowing this place better may not be sufficient, but it is necessary if we want to create a future not of extraction and depletion but of vitality and self-renewal.” (p. xxxiii). The Driftless Reader will continue to help us to know and honor each other and our wondrous landscapes.