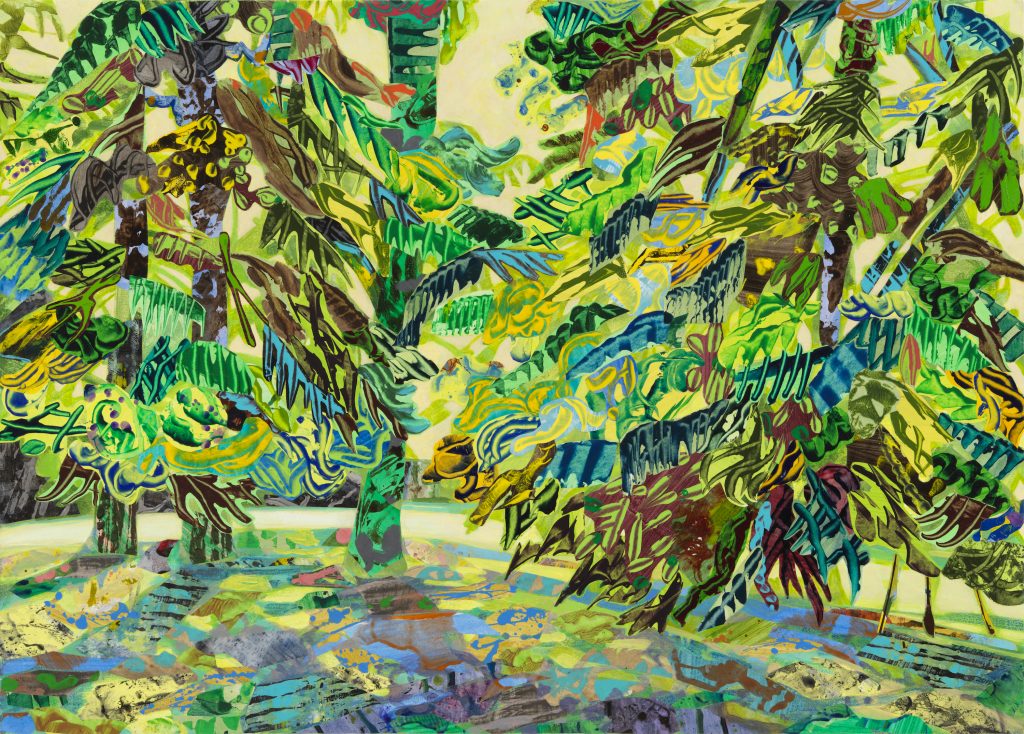 Zelazny’s trees eat the sun. The Eyed Walnut Grove shown here is a painting of black walnut trees baking in July heat near Danvers, Illinois. That heat made humans fly into the shade, but the walnuts feasted on the radiation. Typical autotrophs; self-feeders: sun, water, carbon dioxide, and dirt. If only our lives were so simple.

The series of paintings that appear in this issue of Minding Nature comprise a fraction of the landscape and plein air paintings that Mary Lou Zelazny has been producing for the past forty years. Landscape, often derided (consider Hoogstraten’s seventeenth century dismissal of it as “the common footman in the army of art”), if not rising in status, is a looming reminder of our tenuous relationship with nature.

Each of these tree portraits is composed of hundreds of separate mono-print pieces that have been collaged onto the canvas and combined along with traditional painting technique. The foliage arises in a seemingly random, accidental manner, a kind of mutation. The resulting variation, despite the wild colors, imparts a hypnotic naturalness to the work. The symmetry and patterned regularity of nature is subverted in these paintings, along with a dose of warning coloration. “Black and yellow, kill a fellow” says the snake watcher’s rule of thumb; these paintings yell it. I do not believe that the artist painted this work with a moral intent; the seemingly random, almost mutational nature of collage precludes such an agenda. The two “Black Eyed” paintings turn down the saturation and present some subdued and ominous feelings that accompany the ambiguities of shadow and darkness. The Eyed Tree 3 is a portrait of a specimen along the Des Plaines River; it looks aged and arthritic, stooping over for a drink. 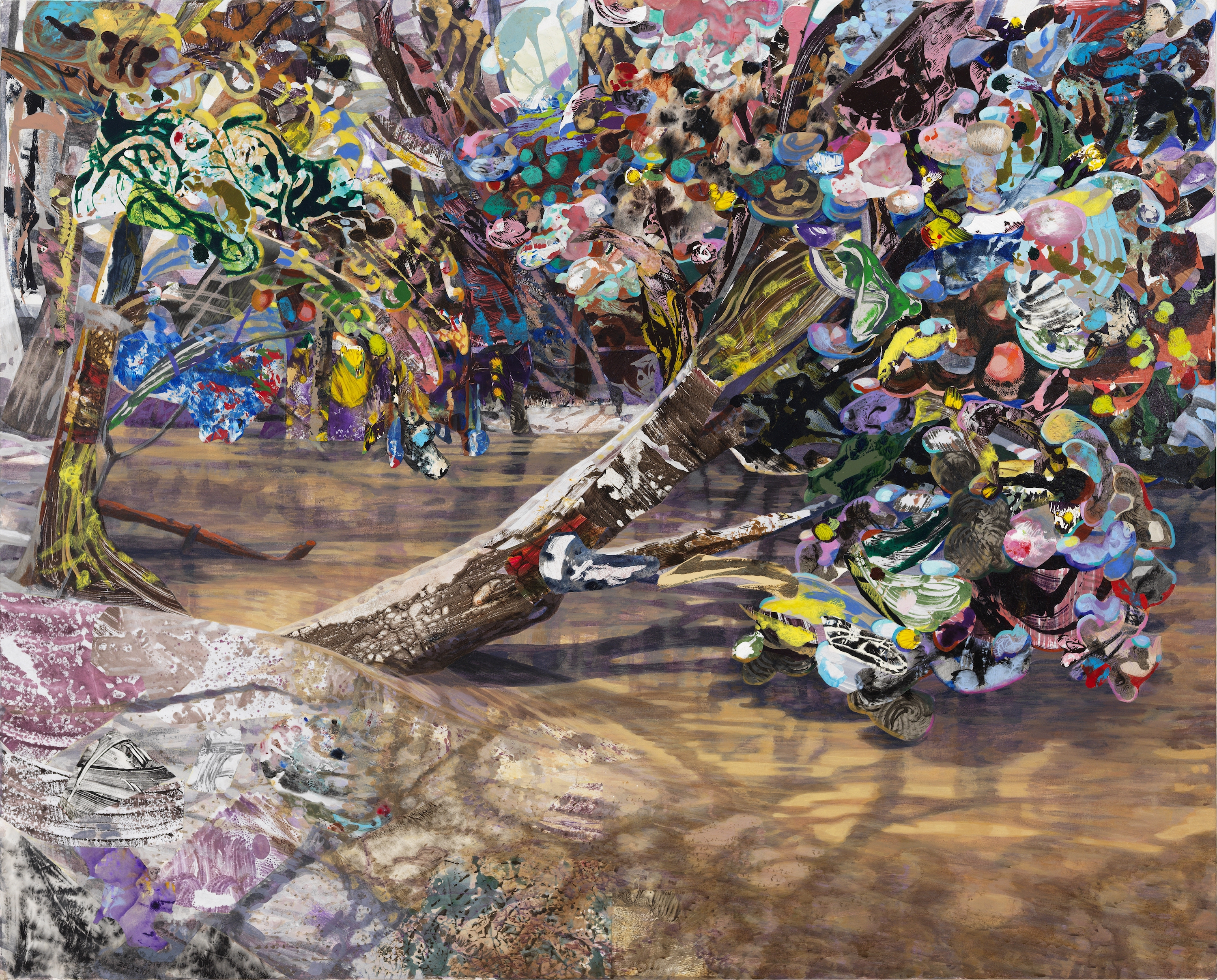 
Each of these trees display Zelazny’s observational reverence of nature. And though some may consider her technique idiosyncratic, most viewers will come away with an appreciation of essential “tree-ness.” Trees have a universal effect on us, if only because they are the largest living presence in our lives. They inhabit our earliest childhood experiences and for many are that familiar central player in the fading prelapsarian myth. To stand next to a tree is to understand a fundamental, asymmetrical nature of human existence, asymmetries that seem near infinite in variety. This fundamental asymmetry is born of an error in human consciousness and its defective spawn, ego who by default imposes us at the center of everything and compounds the error by monstrously magnifying our place in the world; we truly believe that we are giants. An example that is now ever ready is the massive physical disproportion between a human organism and a virus particle. The basic disproportion in our human relation to nature is steadily growing and is at the root of our illusions that humans are capable of mastering and overpowering nature in the long run. It’s hard to imagine that humans are capable of “minding nature,” if minding means “tending to,” “taking care of,” and “honoring.” We need a more basic agenda: minding human nature. It is important to note that the trees in Zelazny’s paintings stand among themselves; people are absent. The hubris and laughable asymmetry embodied in the old saw “man against nature” has begun to show a very serious side. The price of not minding human nature is paid by being painted out of the picture altogether.

In true praise of folly, humans celebrate progress using millennia as a measure of history. If trees were in a position to brag, they would measure in the aeons. As big as a tree seems to be, it shrinks to meaninglessness when compared to the fungal networks among its root systems. It is time to mind the invisible and attempt to fathom the reality that we can be undone by a dust mote. The hydrogen atom, classically considered the tiniest bit of matter, has been swept under the rug of forgetfulness, but it is axiomatic that it remains one of the greatest perils to humans and nature in the form of the H-bomb. Slightly larger but still presenting a striking asymmetry is carbon dioxide; about which not much more needs to be said. Moving away from the inanimate, the idea that an eighty-nanometer viral particle could upend global society has been seen as an affront, sadly described by the meaningless metaphor of war. More symbolic asymmetries, in terms of brain power, concern human relations with animals. Who is the dumb animal when the story of bovine spongiopathy (Mad Cow disease) is recalled: in a perversion of animal husbandry and simple common sense, brain tissue was fed to livestock; what could possibly go wrong? Industrial production of animals, an asymmetry of power relations, acts as an incubator and mixing station for a variety of viruses such as influenza and Nipah. 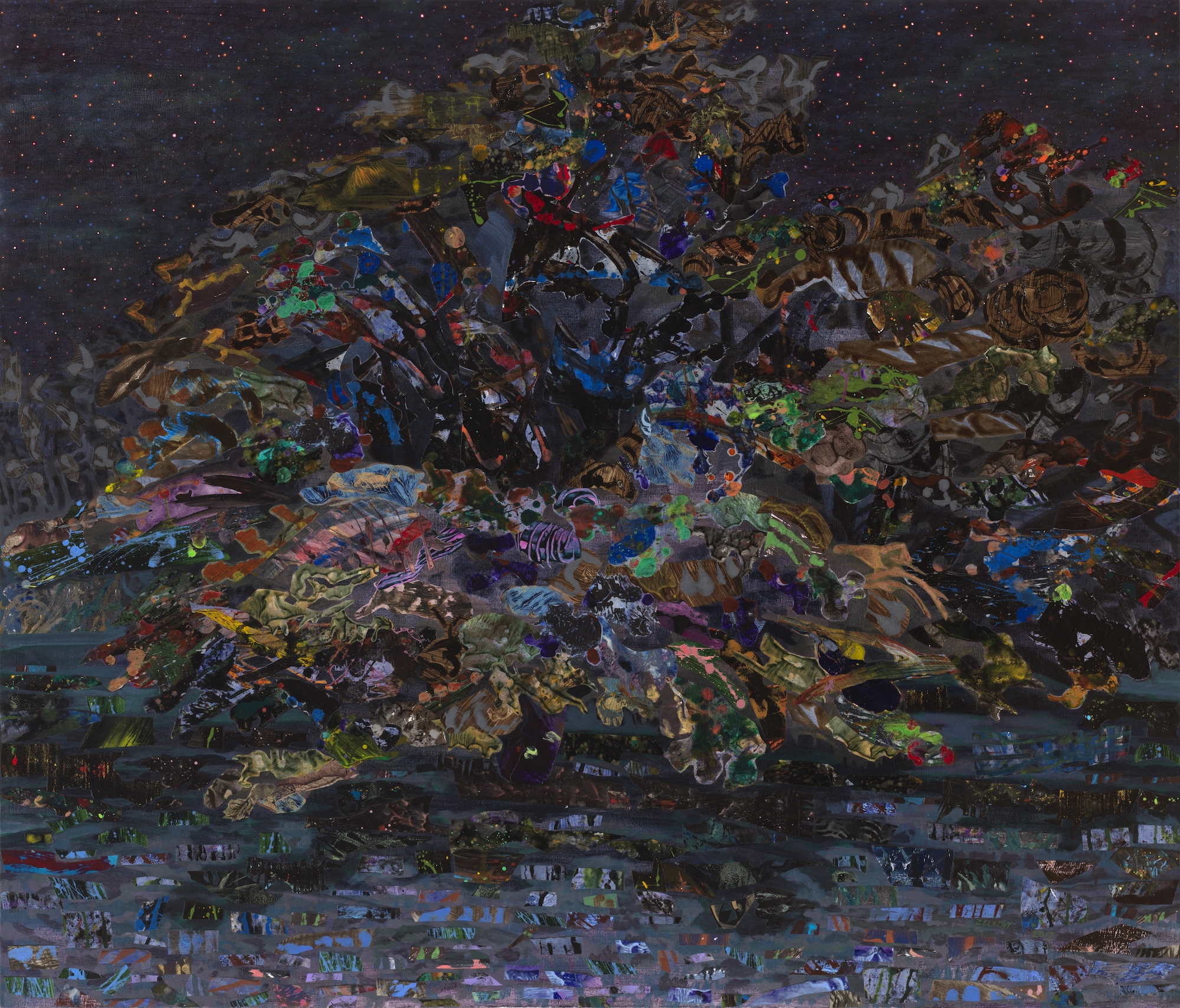 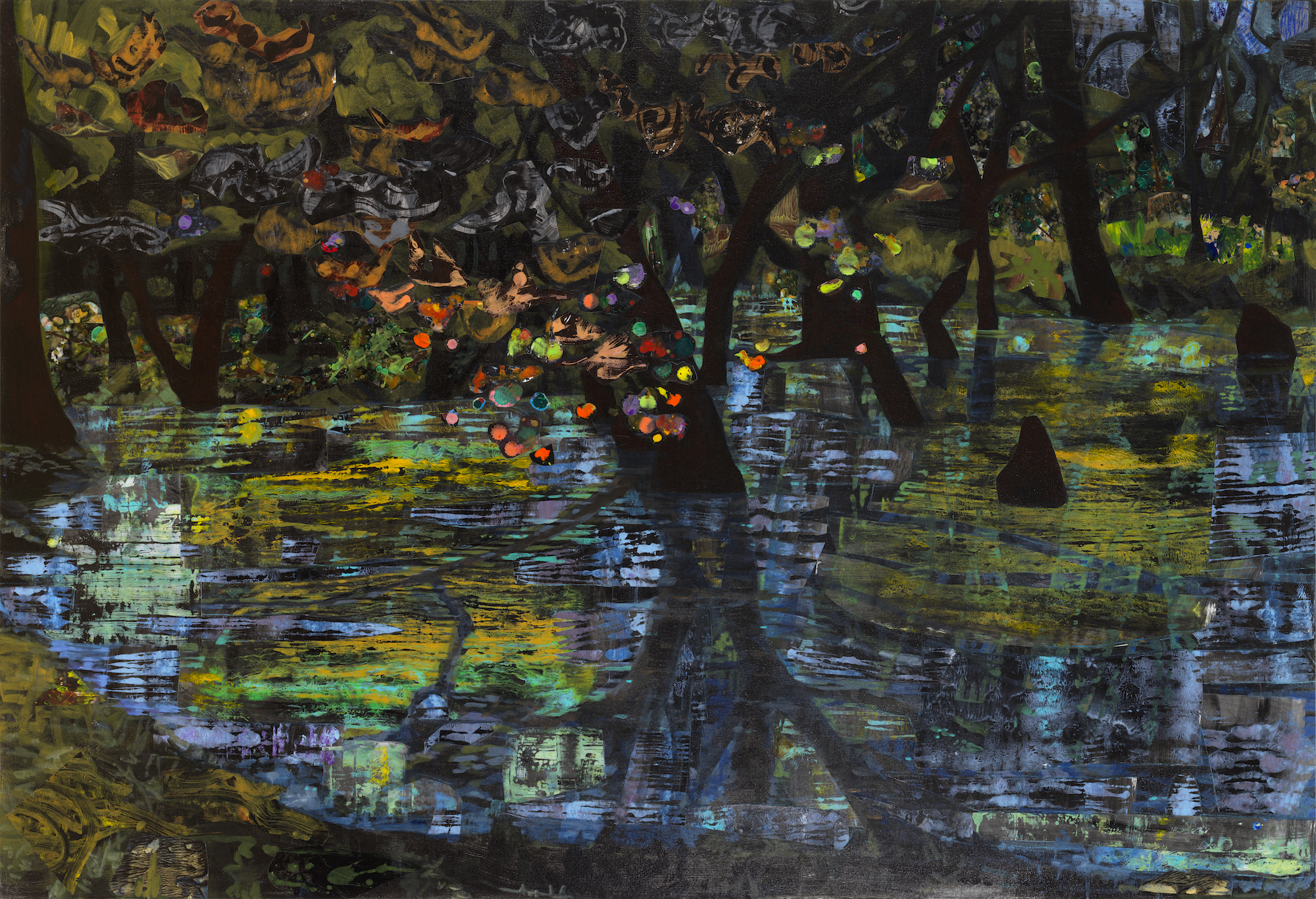 The foregoing isn’t saying that “the end is near.” Nor is it intended to detract and distract from Mary Lou Zelazny’s hyper-aware paintings. It was meant as a friendly reminder. I recall someone’s response to a psychological assessment question. When asked “What‘s the difference between a tree and a bush?” he replied, “They’re both fluffy.” If the questioner sought an analytical answer he was, if not disappointed, then amused. Similarly, contriving to mix Mary Lou’s work with our contemporary degringolade is something of a dog’s breakfast. Surely, one person’s meat is another’s poison, especially when considering the epidemic-generating potential of industrial meat production. There I go again. Returning to Zelazny’s work we see a vision of nature that admires it at its most elemental while simultaneously dragging the mind into a tree’s dendritic network. The wonderful thing about these paintings is their unalloyed openness and disengagement from moralism, allowing each viewer to supply their own interpretation. That is a process that opens the mind for minding. 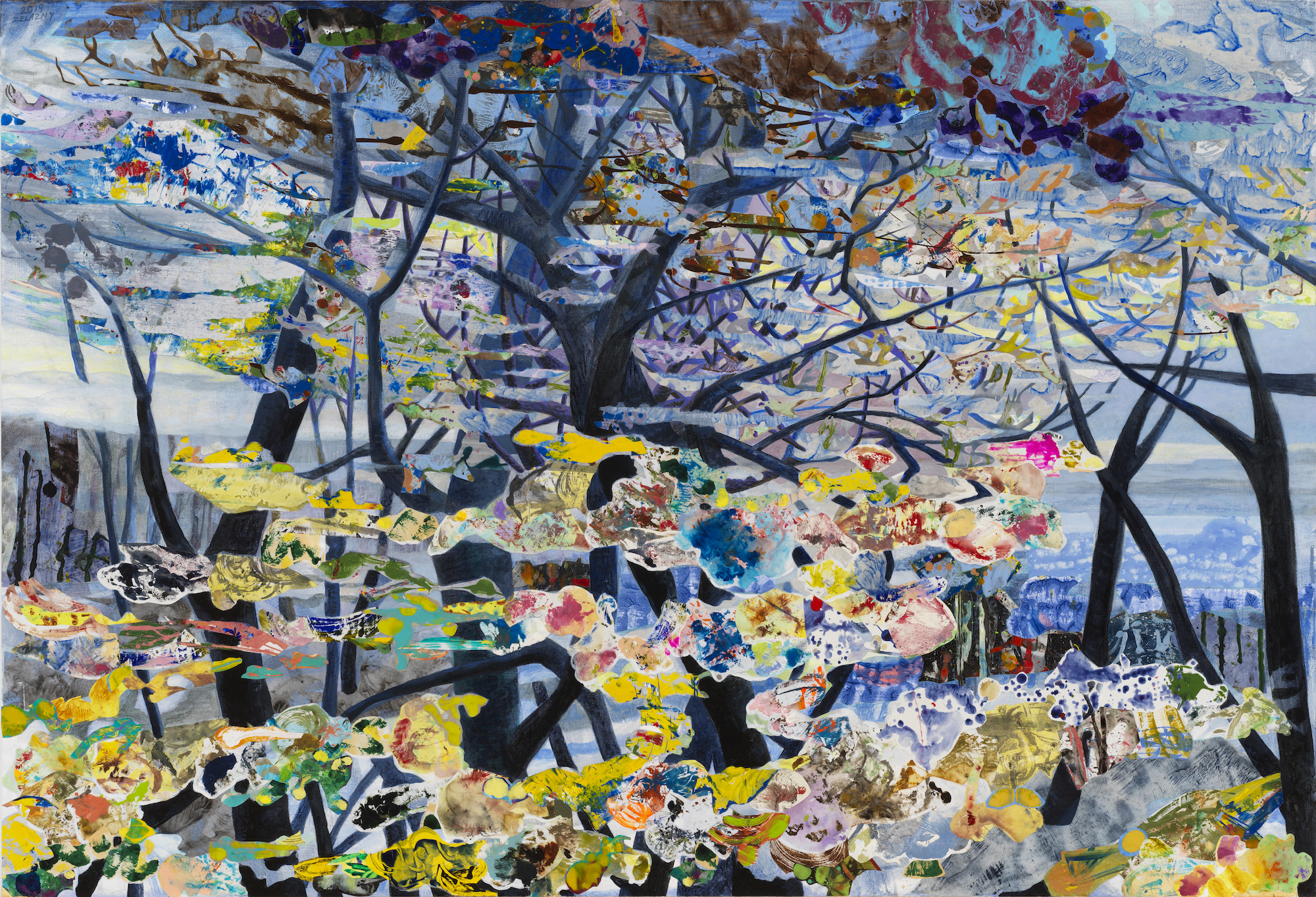 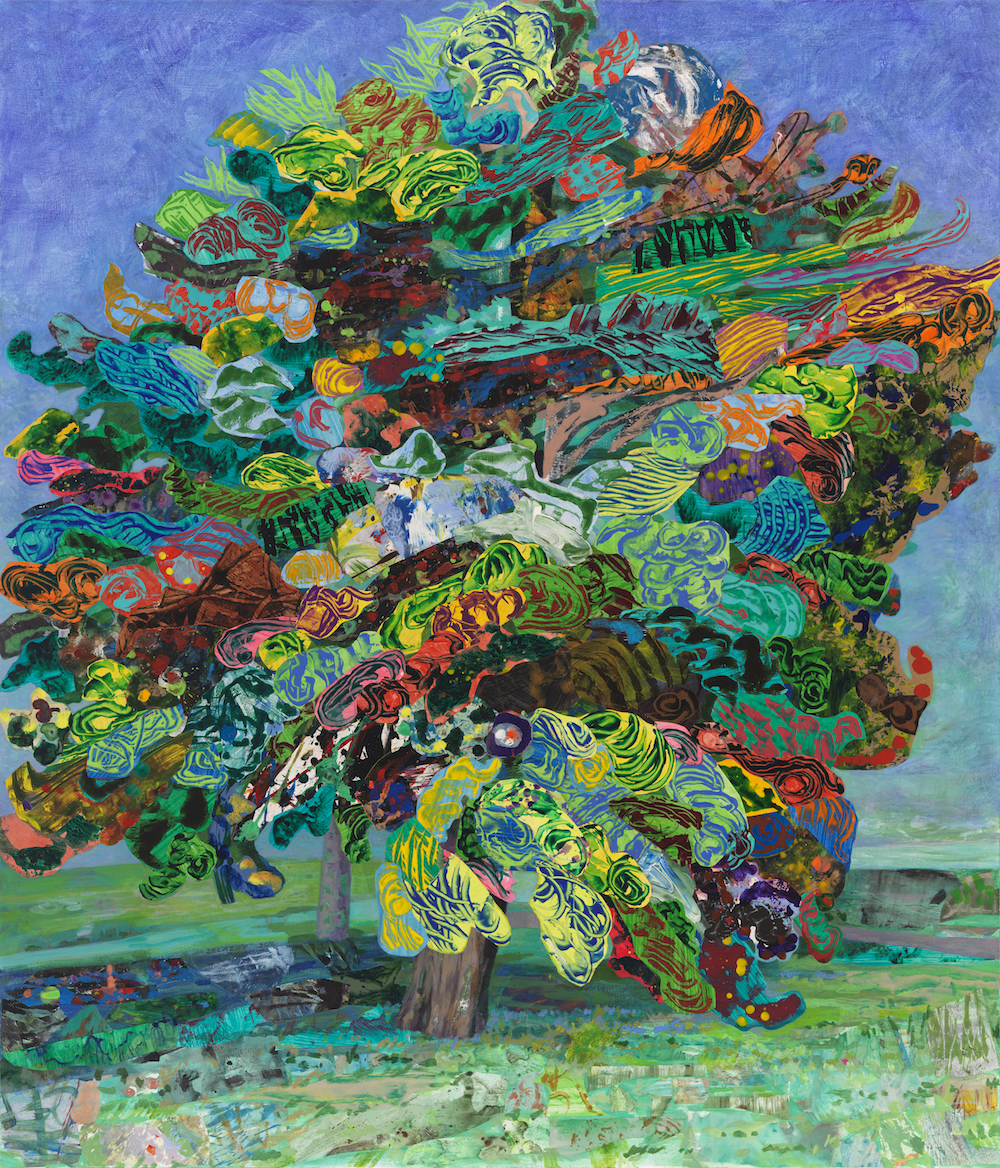 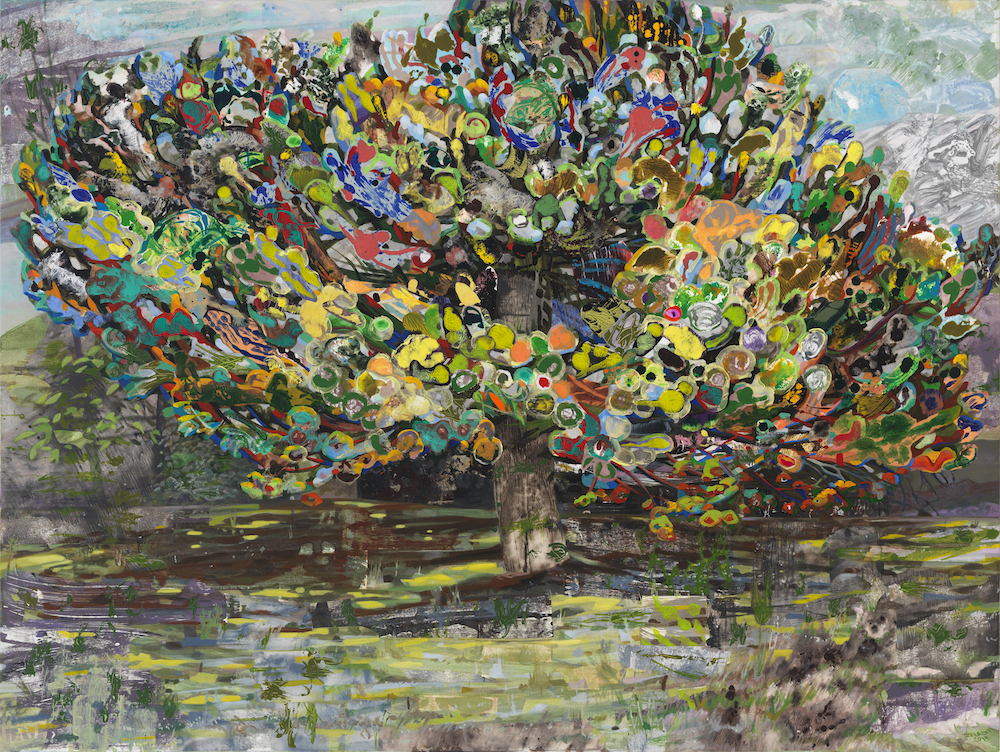 All images by Mary Lou Zelazny and courtesy of the artist.