Ed. Note: We are happy to share this reader response, which is part of a series submitted by undergraduate students at Loyola University Chicago from a course called ENVS 363: Sustainable Business Management.

According to the Classical Economics school of thought, the economy is self-correcting. This implies that shocks to the system will automatically be mitigated by Adam Smith’s “invisible hand” and that all variables will gravitate back toward the norm. This is demonstrated in the boom-bust cycle (see Figure 1) of the capitalist economy and is something with which we are all inherently familiar. It can be seen when the economy is booming and jobs are abundant and the market yields high returns for investors. Conversely, it can be seen in the subsequent (or preceding) bust when jobs are scarce and investment is unfruitful. These oscillations are the very conspicuous characteristics of the otherwise invisible hand Adam Smith wrote about in his book, The Wealth of Nations. However, these fluctuations can be studied to better understand a more dangerous factor at play in the global economy: growth. A Steady-State Economy is a classic concept in economics that deprioritizes growth. In order to combat growth in the economy, we must implement a Steady-State Economy.

As people have studied the phenomena of the invisible hand more and more, comparisons have been drawn to the natural world. The central conclusion is that these self-correcting tendencies are not a function of economics, but rather a function of nature by which nearly everything is bound. The environment is vast with displays of self-correcting oscillations, from animal populations varying based upon food supply to the water cycle itself. But, there are also examples that demonstrate what happens when a shock to the system is too prolonged or the magnitude is too great. One of the most studied examples of a nearly insurmountable shock is the case of the Gray Wolves in Yellowstone National Park. As the story goes, the Gray Wolf was an already declining species in the Yellowstone region at the Park’s inception. From there, predator control programs were instituted to eliminate the wolves. This shock to the system – eliminating a predator – led to an explosion of the Elk population. The uncontrolled Elk population led to overgrazing, which compromised the natural balance of the park. Efforts to reduce the Elk population in order to restore the plant life were futile. Fortunately, the Gray Wolf was reintroduced in the 1990s, and the return of a control factor led to a correction in the populations of Yellowstone (see Figure 2). Had the Gray Wolf not been reintroduced in the 1990s, it is likely that the natural balance of Yellowstone would have continued to erode to a point beyond repair.

The Gray Wolf example serves as a microcosm of the problem confronting the global economy today. Taken as a metaphor, the plant populations represent wealth and animal populations (such as the Beaver and the Bison in Figure 2) represent the general population of people. The Gray Wolves, a control factor, represent imposed limitations on the economy. The Elk represent the large businesses. When the Gray Wolf is taken out of the equation, there is nothing to limit the growth of the Elk, and as the Elk grow, they overgraze the plant populations, which leaves scarce resources for the other animals to graze. As the smaller animals like the Beaver decline in population, so too do the smaller predators. This is all to say that without restrictions on growth in the economy, the big businesses seek and attain continual growth. However, their growth hordes assets like wealth and land, which leads to scarcity for the general population of people. With a declining wealth pool amongst the general population, the smaller businesses that cater to local populations suffer, which leads to less competition for the big businesses, in turn leading to more growth. This, simply put, is the danger of continuous economic growth. But, the world is not Yellowstone, and we do not have a Gray Wolf population to reintroduce. Instead, we must look to reform our perspective on the global economy, and that reform must come in the form of the Steady-State Economy (Figure 3). 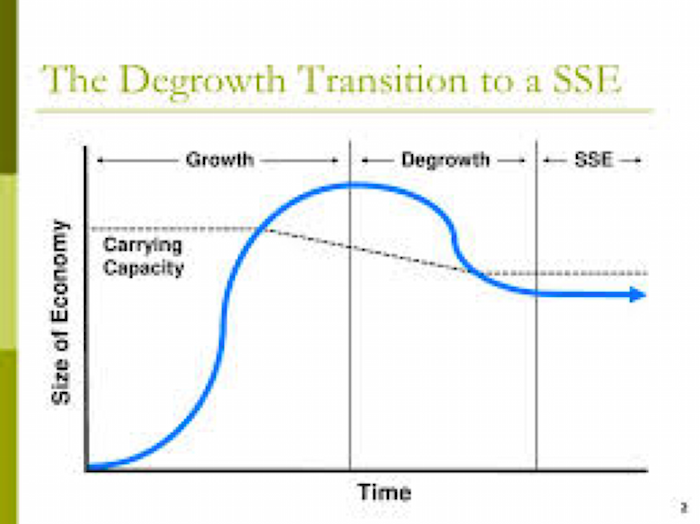 As Figure 4 shows above, Japan is a country that has practiced Steady-State Economics for just over 20 years now and the payoff is tangible. This is a proof of concept, and an encouraging sign for countries looking to move in the same direction. The first step these economies must take, as demonstrated by Figures 3 and 4, is a state of degrowth. This step requires a reformation of our view on economics, and that reformation begins with the realization that GDP cannot be our main indicator of success. Even the creator of GDP, Simon Kuznets, said “The welfare of a nation can scarcely be inferred from a measurement of national income.” Instead, we must shift our focus to more telling metrics, like the Genuine Progress Indicator (GPI) and the Sustainable Development Goals (SDGs). Only by taking these steps towards qualitative improvement and disregarding quantitative growth can we reach a stage of stability in which the whole population, not just the Elk, prosper.