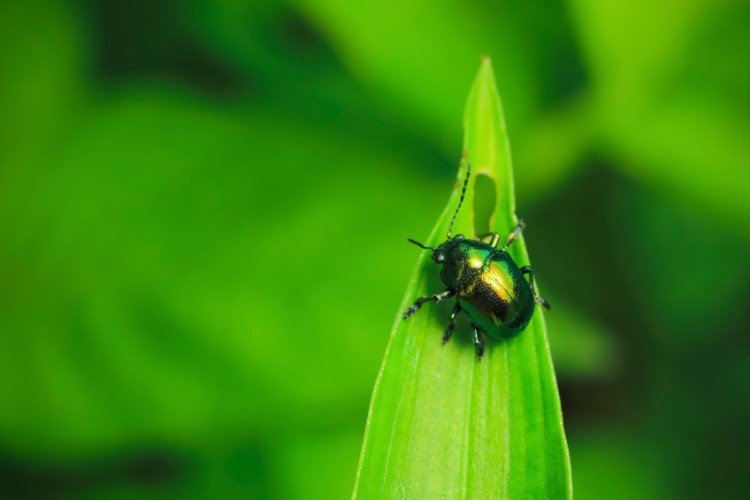 A garden patch is a furnace of co-evolution, a trysting ground for lengthy tongues and hard-to-get nectars. My eye flashes on a beetle the size of a thumbnail, cloaked in emerald iridescence. Steadying itself on a leaf, it refracts a polished light, reminding me why the ancient Egyptians, among others, were sun-worshippers. Yet the sun-sparked garden is not a dreamy Shangri-La; it is also the green zone of a perpetual arms race. 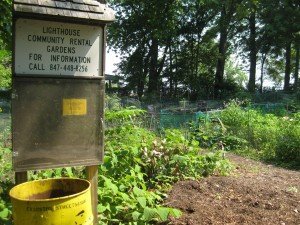 I have a small plot in a community garden that lies one hundred fifty yards from the massive inland sea of Lake Michigan. One afternoon, my six-year-old son and I were checking in with the small critters that make their living in and around this garden. A beetle found us, crawling across my bare foot, marching toward destinations unknown. It was a great moment between father and son of reveling in small wonders.

As we watched those six-legged ambulations across uneven terrain, a seagull swooped in and plucked the beetle from its chosen path. Big Sur poet Robinson Jeffers wrote, “violence is the sire of all the world’s values”—a fitting thought if you contemplate seaside rocks and goshawks’ jeweled eyes, as Jeffers did. But only a chosen few behold the great churning violence of earth with such poetic equanimity. The beetle no doubt would object, given the chance, before descending the slope of a gull’s gullet.

I find myself reaching for words. To my son, a murder has occurred. The meek have not inherited the earth. I am left wondering how to frame predation without resorting to singing Elton John’s “Circle of Life.”

The seagull has needs, too, I say. Unsatisfactory, I know, the moment the words come out of my mouth.

I heard the buzzing and clacking commotion before I pinpointed the source. My eyes first traveled up, then scanned side-to-side. After another few rounds of buzzing, I finally looked in the right direction, to ground. Stepping closer, my brain hummed as I tried to make sense of the drama unfolding at my feet. In fits and starts, a black-and-yellow-banded wasp, more than an inch long, was towing a plump cicada across the grass. 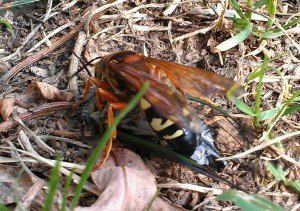 A fury of veiny brown wings, the outsized wasp repositioned itself for better leverage, working different angles fore and aft, on a mission.

I discovered later that this was not a six-legged gladiatorial contest. What I witnessed was a funeral procession, with a single black-and-yellow wasp (Sphecius speciosus) as the only attendant. This determined solitary wasp’s common name, cicada killer, summarizes part of its life cycle with precision if not nuance. (One wonders what common name with which humans might be branded were other creatures to choose the nomenclature. Everything killers, maybe?) A fair name or not, the cicada killer does exactly that, and it’s not so much the killing as the manner in which a cicada is killed that may make you squeamish.

For most of us, a preferred death, a good death, would be as quick and painless as possible. Cicadas likely don’t ponder the topic, but I can’t imagine that a cicada with choices would opt for a cicada killer as an executioner. Adult cicada killers don’t kill cicadas; their larvae do. The female wasp has a specialized ovipositor that paralyzes her victim. She then hauls the immobile prey to a nearby burrow—a nest chamber—that may have multiple cells branching from the main stem. Down the tunnel they go together, where she lays a single egg upon the cicada, reemerges from the passageway, seals the entrance, and goes out in search of more fresh meat.

See, it’s for the children. Because when the eggs hatch one or two days later, the larvae have a still living—though quite helpless to do anything about it—meal.

In summer months, I now see cicada killer wasps everywhere. I once watched for half an hour as a cicada killer excavated a burrow at a local park, kicking sand away from the steel pole at the base of a play structure. 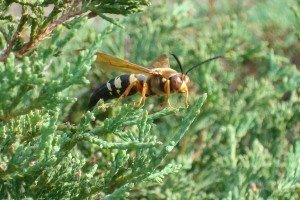 Better that the children giggling in tunnels of their own above were unaware of the subterranean preparations below.

Most often, I notice the wasps’ tunnel openings along the edges where sidewalks meet Bermuda grass. I like seeing these tunnel building wasps, wondering how insects evolved such specific methods of dispatch, how the complicated worlds of other species—so much of it unseen or unknown—can be packed into a dendritic-rich brain the size of pinhead. But if I stare too long at the series of dark holes beside the cement, I begin to dwell on the fate of cicadas.

Should we praise cicada killers? Should we pity cicadas?

Cicadas, too, have their own complicated worlds, and have co-evolved to foil the plans of various predators, including parasitic wasps. Their cycles of emergence vary, but when the pre-arranged time comes for cicada nymphs to leave off their sap-sucking ways and fledge from the ground, they do so en masse. It’s a numbers game; if you can’t beat them, overwhelm them.

Many come to feast at the banquet that millions of cicadas provide. In my neighborhood, I saw a sparrow struggling with his tiny beak to consume a cicada, only to have his prize stolen away by a squirrel, who scurried a few feet up the trunk of a tree, hung from his hind feet, and shucked that cicada like a cob of fresh corn.

In Life Everlasting: The Animal Way of Death, Bernd Heinrich notes that ancient Egyptians believed that Khepri, the sacred scarab beetle, bore the responsibility of rolling Ra, the sun god, into the eastern sky every morning. As honorable a task as this might have been, this wasn’t Khepri’s only responsibility. A guide from death to life, the scarab was the favored talisman to place on the hearts of mummies. Khepri illuminated the way for the dead. A godly logic based on natural history observation: dung beetles are remarkable recyclers. What better creature to lead a soul into a new existence?

A sunny scene: a lovely summer day, my languorous bones warmed by the heat of Khepri’s gift of sun. On the lip of a cement pond, sparkling from the spray of a central fountain, my son and I toss sandwich crusts to mallards. While the ducks fuss over the morsels, a yellow-and-black movement catches my eye. A cicada killer is hovering just above the flotsam and pond scum that congregates in the corner of shallow ponds. I nudge my boy’s elbow. We exchange excited whispers about our luck. The perfect spot for observation without even intending it. We watch, curious to know the business of the cicada killer (or perhaps leisure—she may simply have been enjoying the sunshine, same as us). A male mallard paddles with a smooth sense of purpose toward the pond muck. A thought flashes in my mind—something like, no frickin’ way, if memory serves—as the duck increases his pace, snaps his emerald head forward, and poof!, like an aerial bread crumb,the cicada killer is gone.

Should we praise the duck? Should we pity the cicada killer?

“Life is not just a diurnal property of large interesting vertebrates,” Gary Snyder writes in Practice of the Wild, “it is also nocturnal, anaerobic, cannibalistic, microscopic, digestive, fermentative: cooking away in the warm dark.” Warm, fuzzy animals bring warm, fuzzy feelings, but I think it is important to reckon with the metabolic beauty, the digestive otherness, of the earth. Predator and prey, prey and predator—it is not the one or the other but the tension between the two that produces emerald wonders. I don’t want to turn too soon from these darker intricacies. Behind every silvered sun-kissed feather are a thousand rebirths. That the sun warms my face for this one moment in time is a shared gift, deepened by lingering on the ways of beetles, cicadas, wasps, mallards, and seagulls.

I’m in the garden again. My son is playing nearby. I prune the raspberry bush and tomato branches, so that their energies are more concentrated into the remainder. Plants have their defenses, too—toxicities and thorns, bright colors and landing pads, they welcome some and not others. My domesticated garden plants have me. I fence out their enemies, weed their wild cousins who compete with them for nutrients.

I turn the soil and think back to that beetle, snuffed out by a seagull. I think of its camouflage, a defense against the avian eye. Isn’t this the way of the garden, of the world, out of everyday need emerges the dazzle? Beetles that look like four-winged gemstones, but who are recycled without compunction into the gaping maw of the biosphere. If I had my druthers, I’d probably opt for a more peaceful beetle departure—but I don’t have my druthers, and that may be how beetle chitin is transfigured by evolution into a corona of green flame. 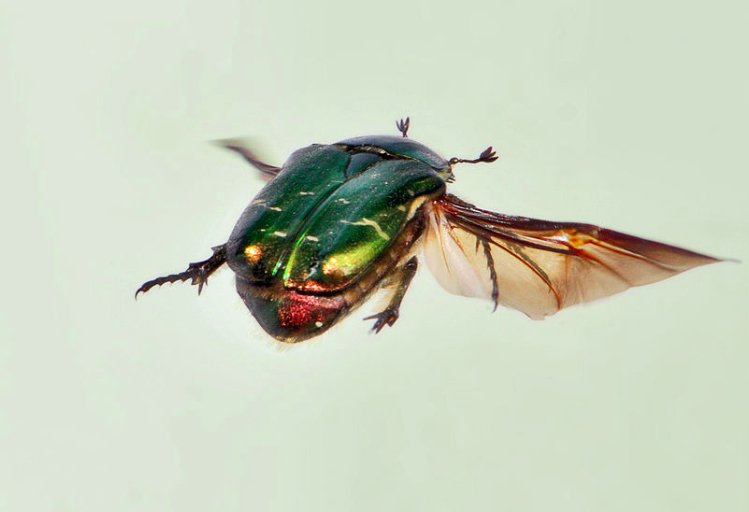