The High Line: Wild in the City

The High Line is a park created from disused freight-rail infrastructure on the west side of Manhattan, New York City. Massive iron columns and girders that once buttressed boxcars laden with meat carcasses, commodities, and goods for the city’s residents now support a park-walkway delivering other essentials—nature, art, and space for people to play, relax, and hear their own, perhaps faint, inner music that rises in chorus with wild nature.

Having read different accounts of this urban reclamation project and its role in bringing nature back into the city, I was eager to experience it first-hand. Early on a weekend morning (to avoid crowds), I left behind cars and curbs on the cobblestoned streets of the city’s meatpacking district, and climbed the stairs to this elevated park.

Natural Design
Ascending to the park actually feels like crossing the threshold of a sacred space. People’s demeanors shift noticeably as if they are entering a holy place. The High Line’s space is for nature, suddenly front and center amidst an urban backdrop. Blooms, leaves, shrubs, short trees, and big tufts of grass meet the eye, tumbling around a central boardwalk and interspersed throughout preserved stretches of rail track. 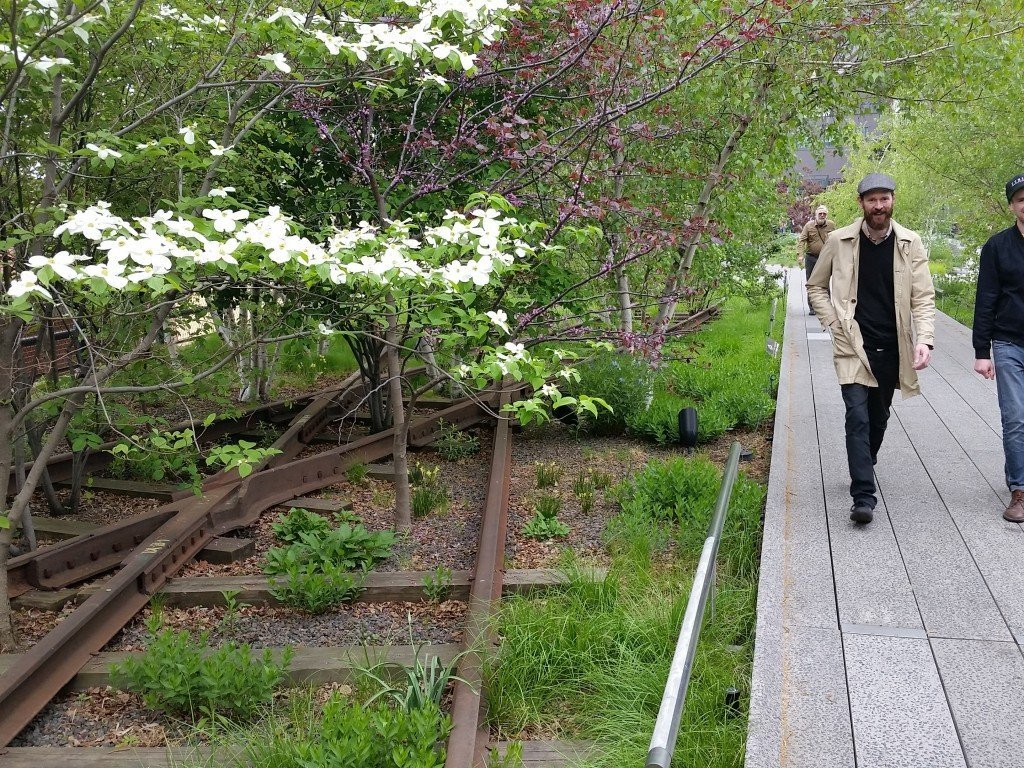 The lushness and density of plants is astonishing against the rectilinear outlines and edges of buildings. These are not suburban flower beds zoned into neat manicured plots, yet it’s obvious to any gardener that the planting is designed and intentional. The effect simulates nature’s simultaneous chaos and inherent order. 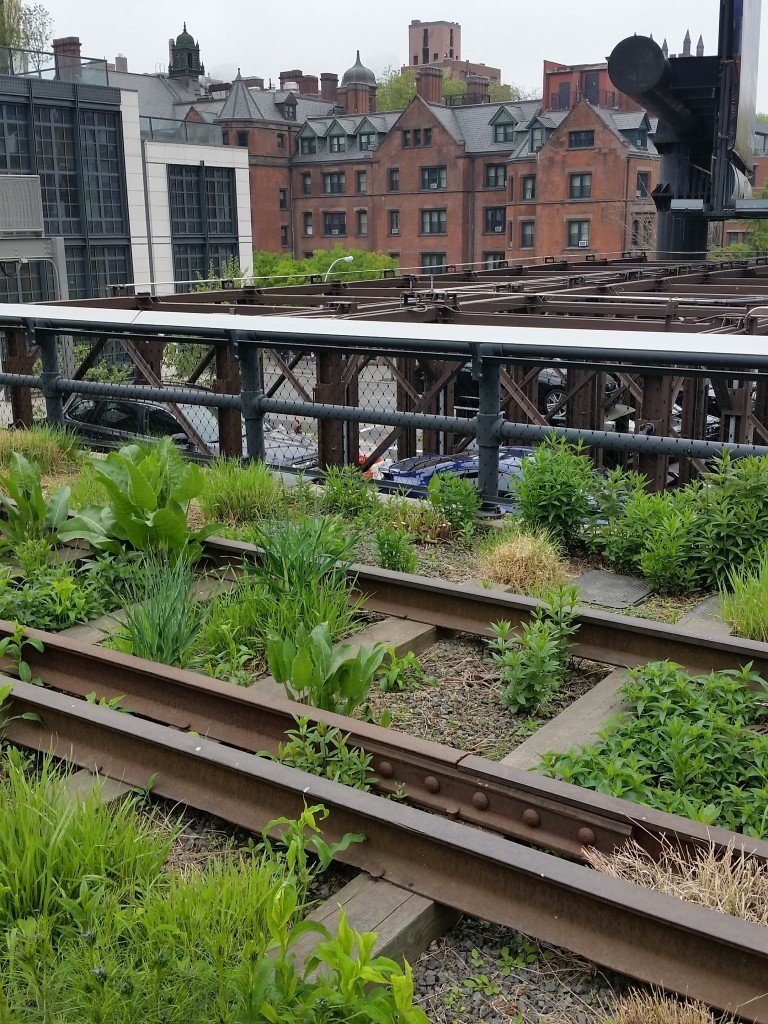 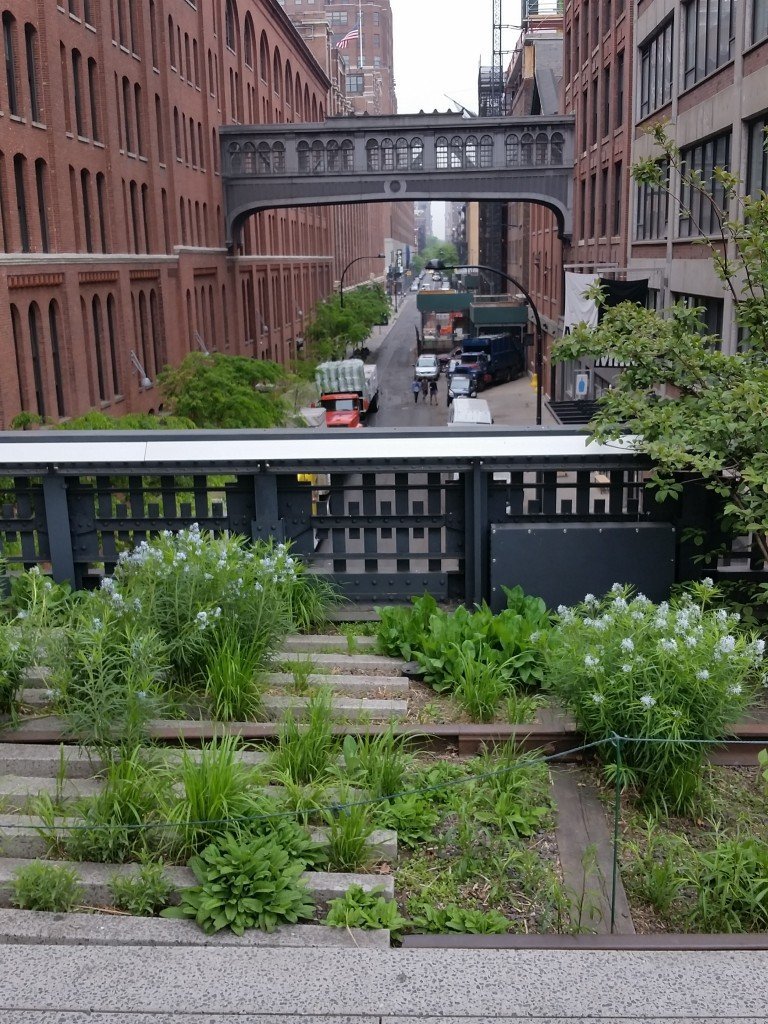 A Valley of Skyscrapers
This long verdant “valley,” suspended between the city’s alternating mammoth modern steel towers and historic brick high-rise buildings, contrasts with the high-elevation existence of the city’s residents. 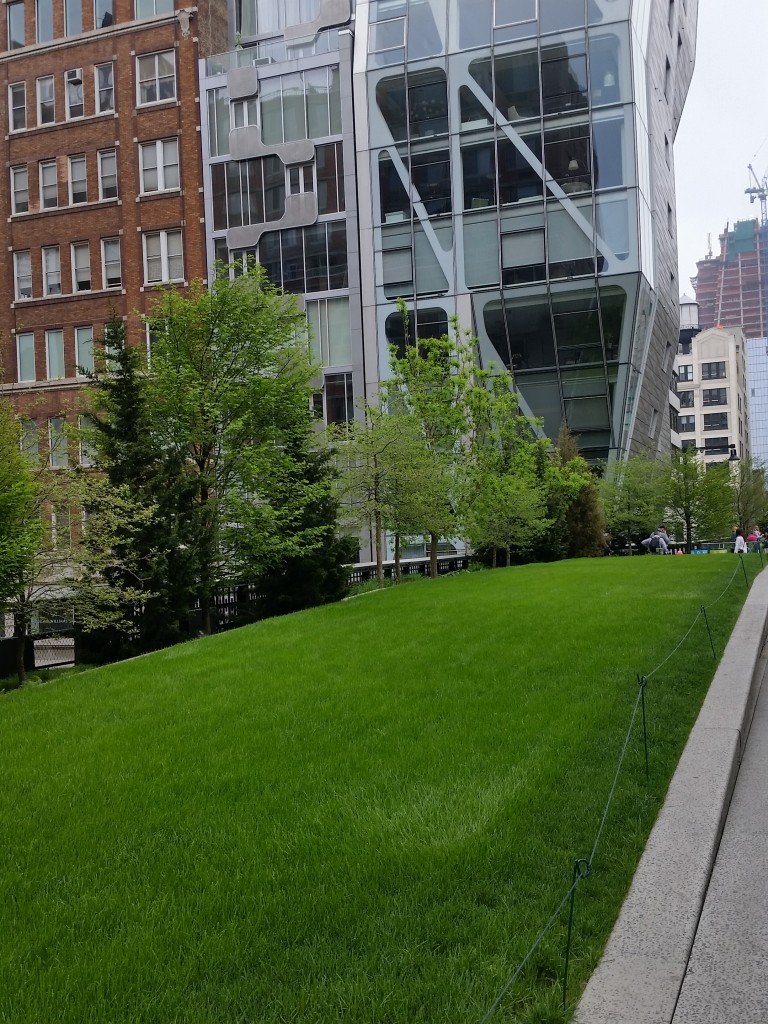 Large picture windows, from what is now prime real estate, look out over park views. (I spotted signs posted on buildings with prices in the millions of dollars.) Soft, green textures fill the space where gritty, smoky trains once plied. From the park itself, the surrounding buildings seem like cliff-faces. You can pause, peer down narrow canyons of building walls, and try to wrap your mind around the seemingly impossible feats of jigsaw city planning. 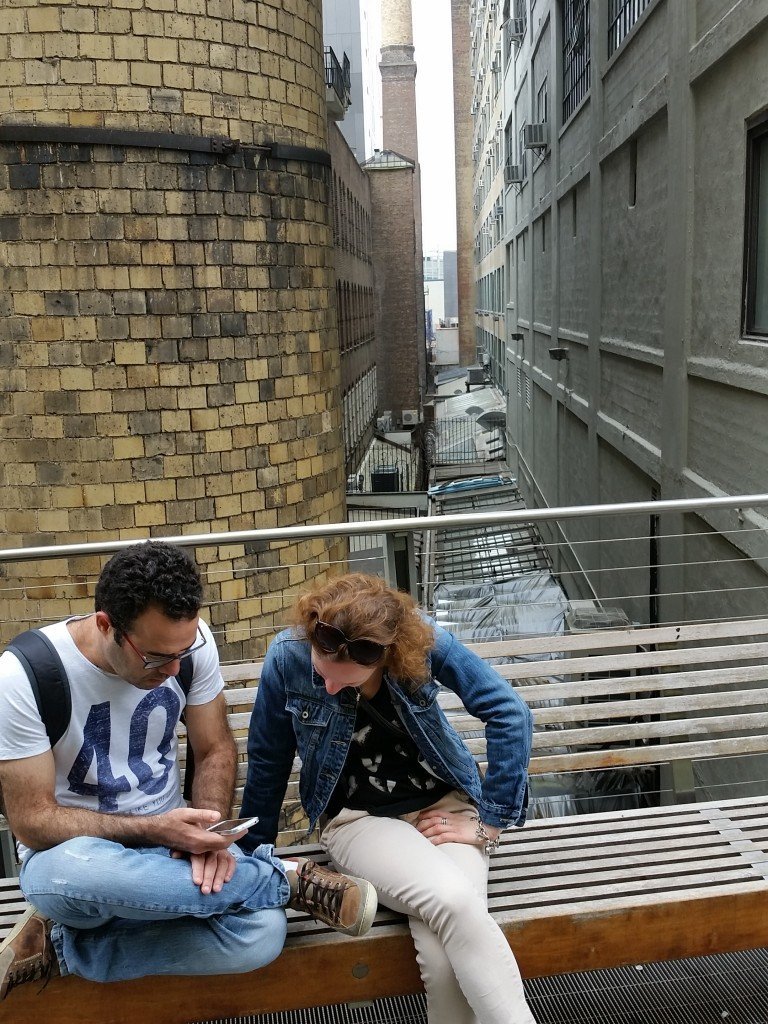 The elevated park corridor provides a reflective vantage for the historian as well as the architect. The facades of worn brick tenement buildings framed with metal grate fire-escapes and ladders hearken back to long-ago residents living in cramped quarters (circumstances, which despite the passage of time, haven’t changed much for today’s residents). 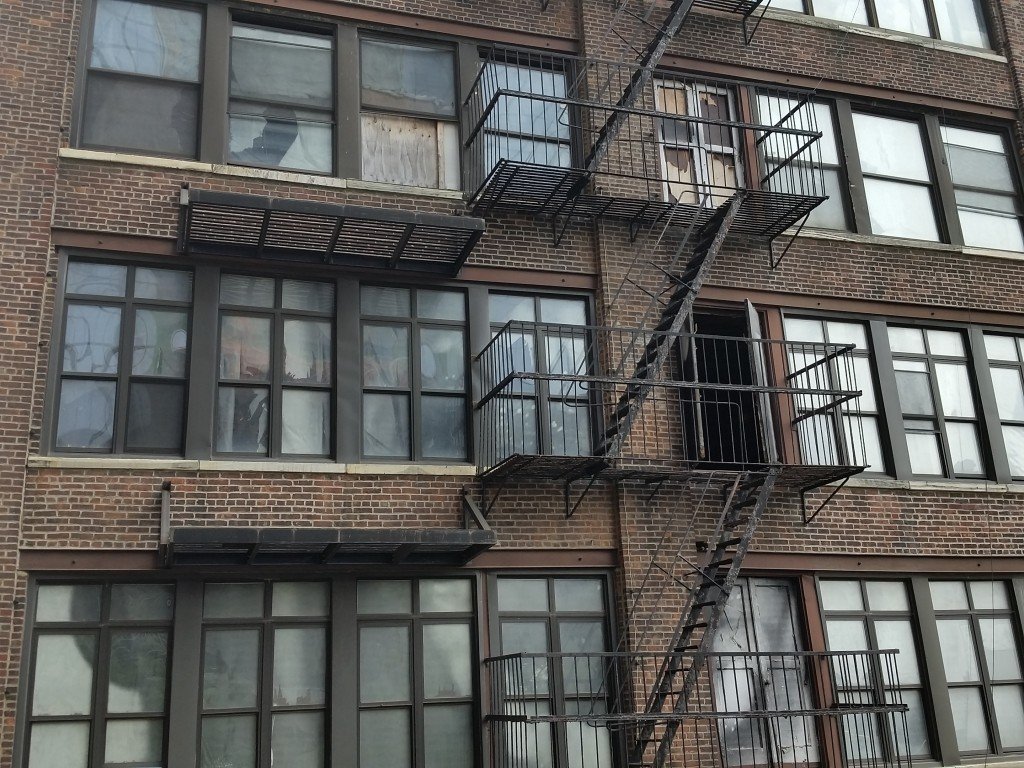 A behemoth, bulging, steel Gehry building looms large along one section. Welders and construction workers suspended hundreds of feet above conjure images of black-and-white films and photos of New York’s steel workers on beams and cranes.

Tickled by Art
The backs of building walls enclose much of the lengthy park (as they do any other edifice in Manhattan). They seem less claustrophobic and severe, though, because they are covered with mural art or playful commentary—an intentional part of the parkway installation and experience. Art installations and sculptures are set up amidst remnants of track rails, trestles, and greenscaping . 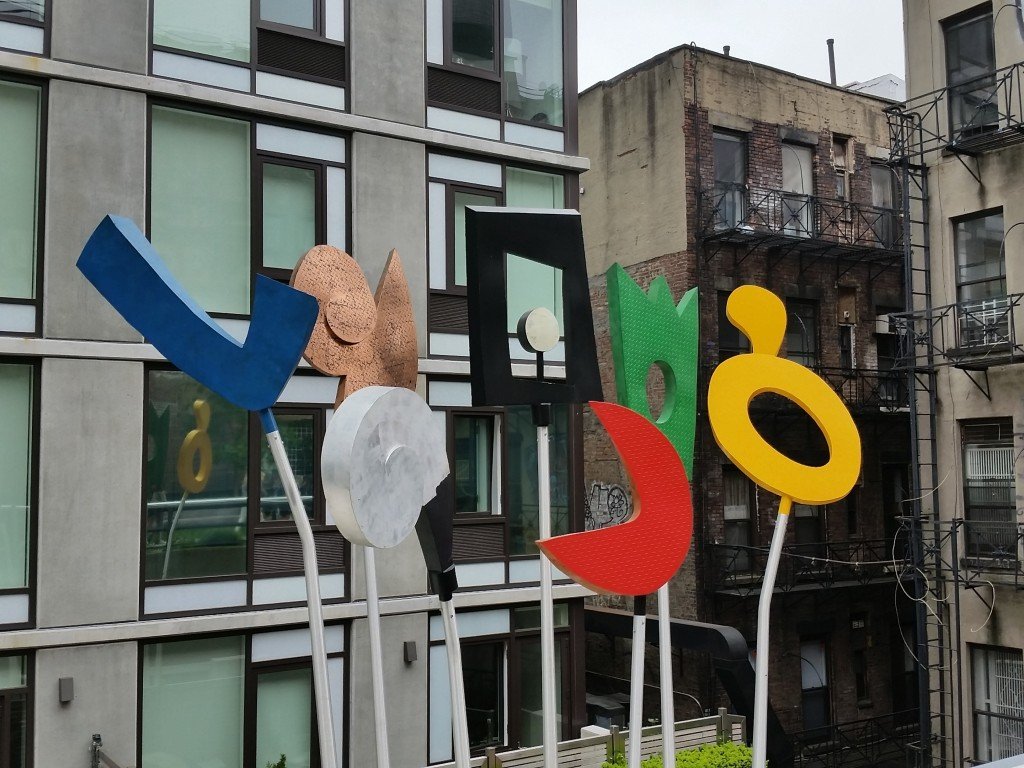 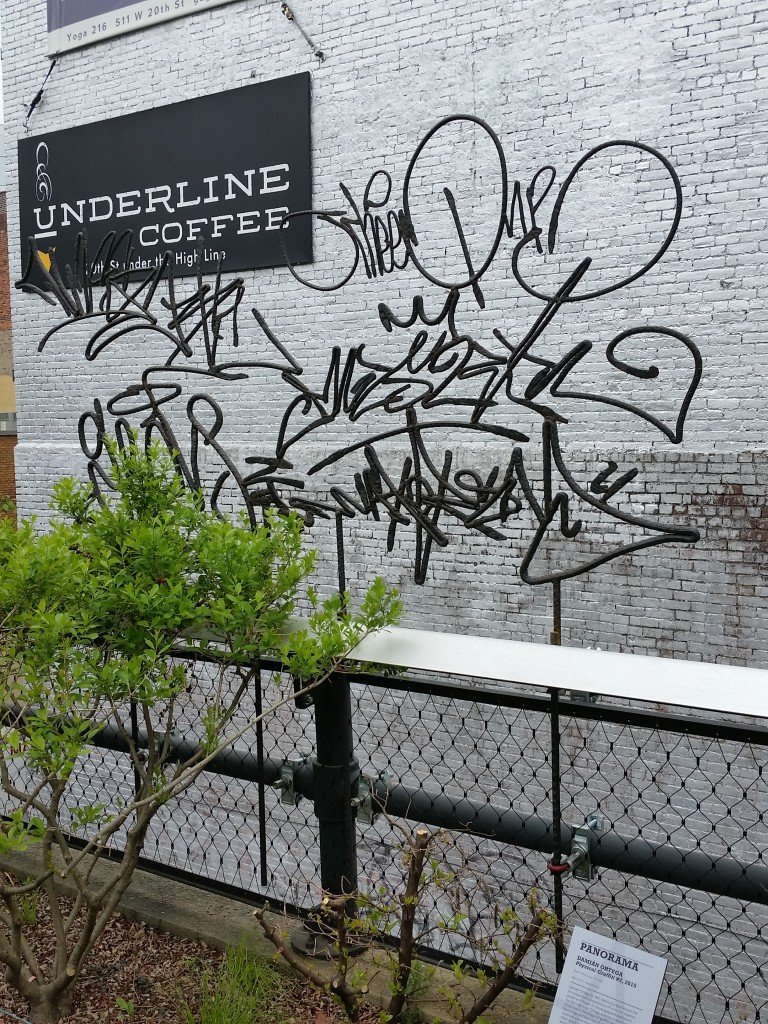 The art mirrors both the garden itself and aspects of city life—telling a story, prompting the walker to muse on everyday lived experience with a new perspective, elevating and simultaneously lessening the city’s influence. I was particularly struck by the metal rebar-crafted graffiti by Mexican artist Damiàn Ortega, which, when viewed against the nearby walls, could easily be mistaken for actual spray paint scrawls. 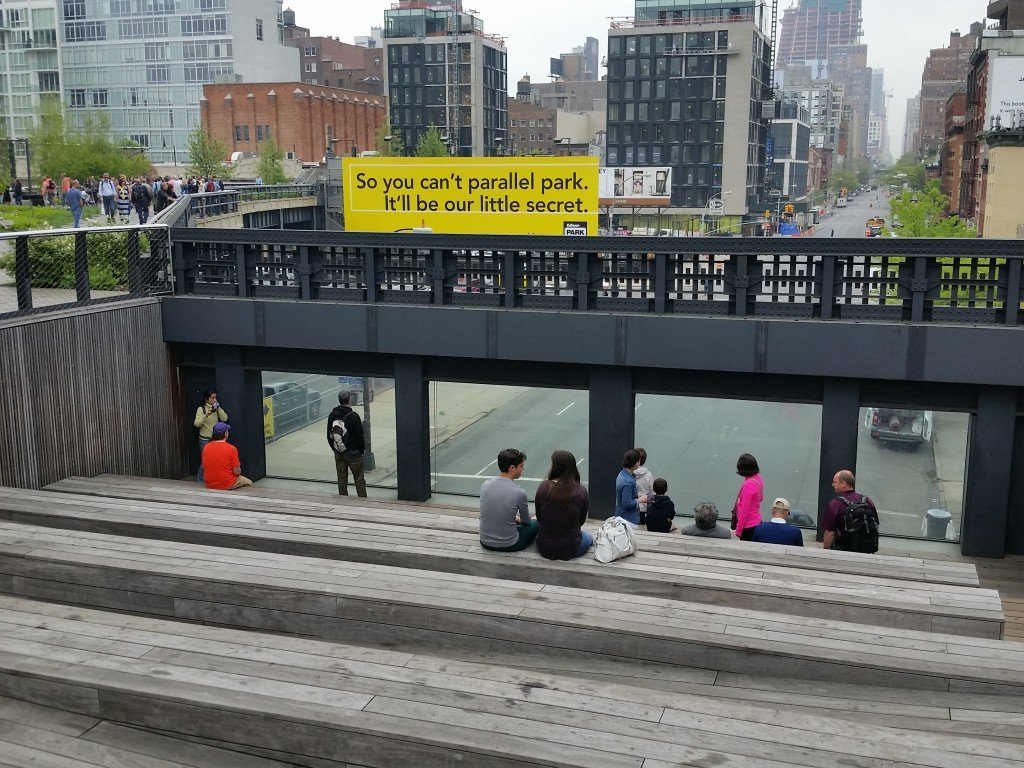 In an installation along one section, a series of wooden benches slope down in an amphitheater-style arrangement to a big window overlooking the street below. The street below is effectively the stage. The benches offer a unique vantage point on the pageantry of a New York city street—its flow of cars, bicycles, faces, and movement. By elevated remove and theatrical staging, the walker has a counterpoint to the beats and rhythm of busy city life. 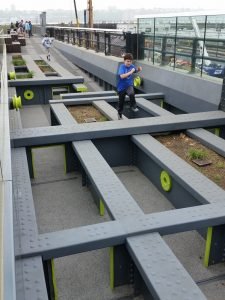 In another section, children race around on whimsically arranged blocks reminiscent of the mechanical infrastructure of train yards. I watch as they disappear into a cage built beneath the walkway and pop up into a pod that resembles the manholes used by utility workers servicing drains and tunnels. They happily pose for parental cell phone pictures. 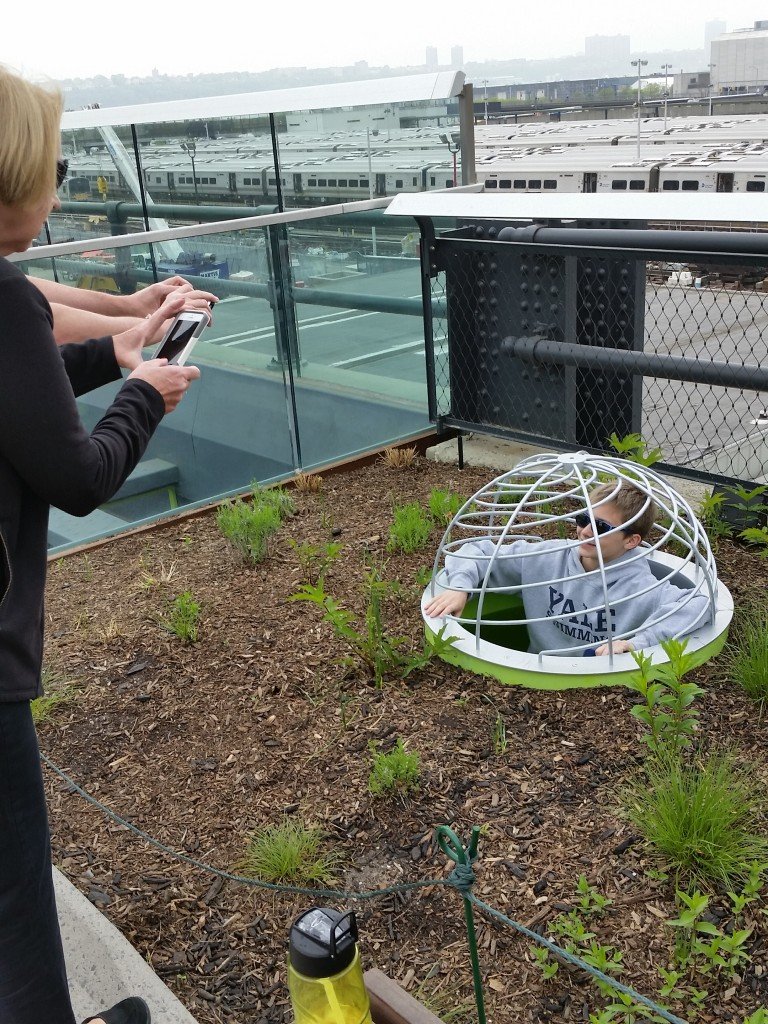 The End of the Line
After its trajectory through the city’s canyons, the High Line snakes into an area where unbroken views suddenly open up, and the Hudson River appears. Light shines differently in the open skies reflected off the grey, choppy water. Ferries bounce along in the foreground and ships move by slow inches in the distance. 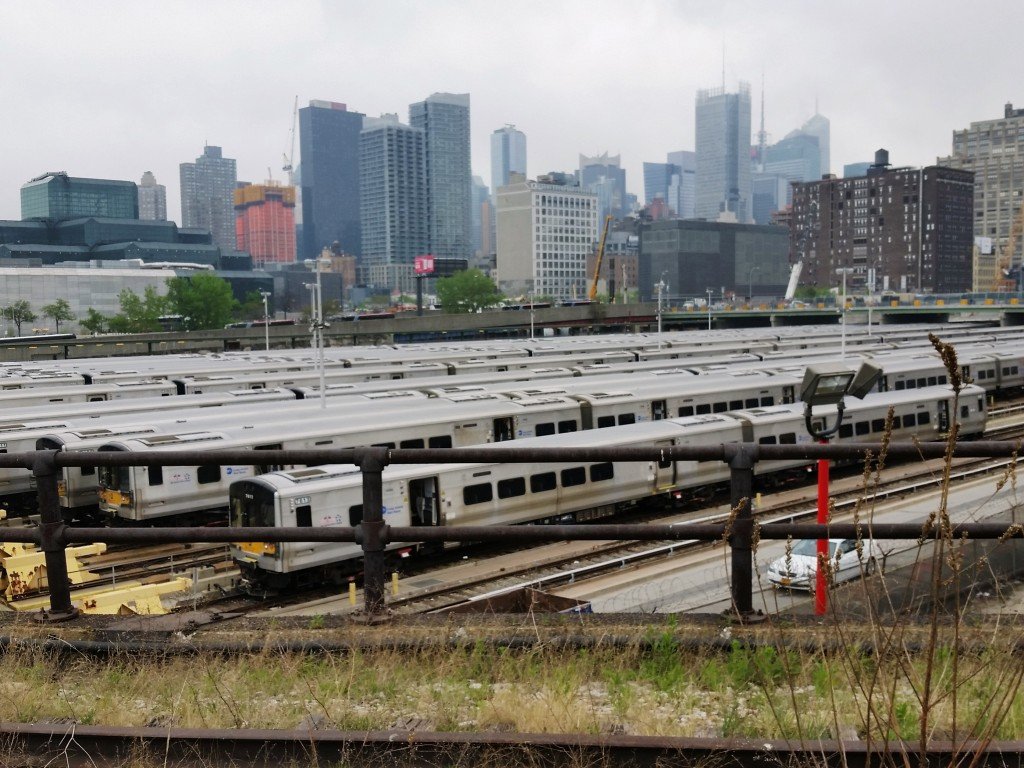 Both literally, and ironically, the High Line seems to end above the “end of the line”: a massive depot for subway cars, metal parts, and unused machinery. Scores of subway cars sit here, perhaps awaiting service. The subterranean system’s innards are visible in aerial overview. Looking back towards the city, narrow sky scrapers soar into the mist behind the yard. Cranes punctuate the skyline, busy with the task of building still more of them.

I reflect, at this end point, on the Herculean toil of arriving here. The energy it must have taken from countless citizens who worked in committees, held endless discussion meetings, and tugged away at the city bureaucracy is remarkable. (The park was created by a partnership between the New York City Department of Parks and motley groups of citizens who banded together under the organization “Friends of the High Line.”) Familiar as I am with bureaucracy, I get a hint of a headache while contemplating the time consuming process of drafting and rewriting proposals, securing engineering plans, reading the fine-print of contracts, negotiating budgets, fine-tuning designs, making compromises, going on faith, asking for approvals, and waiting for elusive signatures. 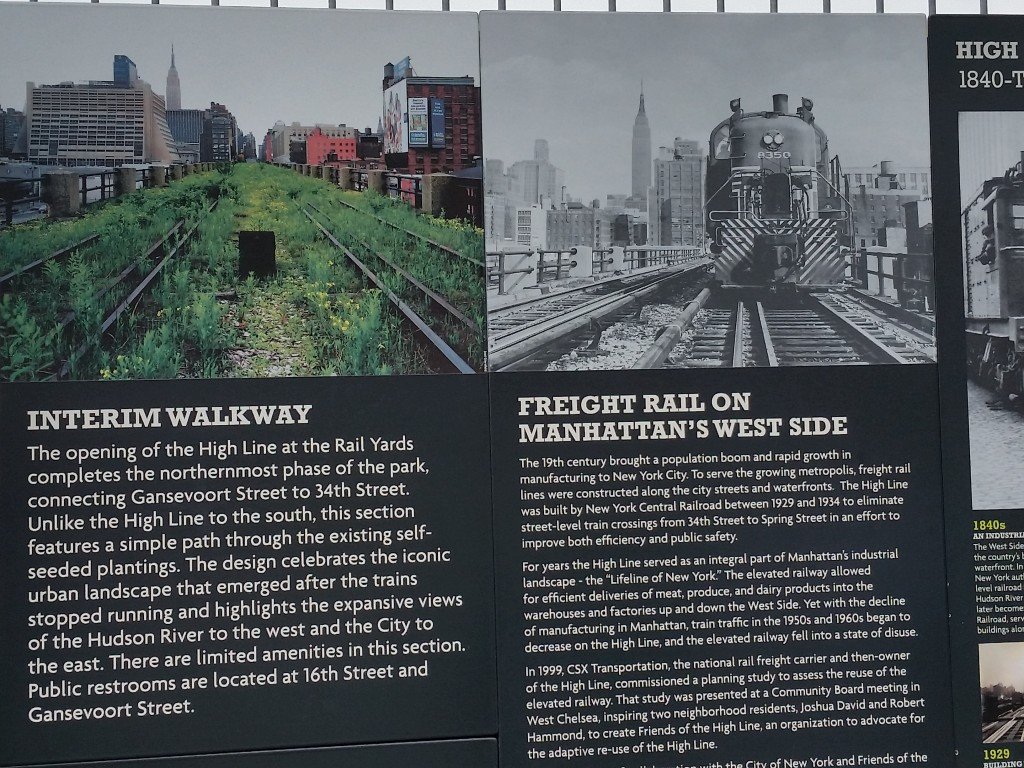 I gaze across the Hudson River’s powerful waters. How does a trickle in the Adirondacks grow into a river’s million-gallon-per-minute flow? How is the rusting hulk of a disused rail line transformed into this exquisitely designed corridor of nature—now an international showpiece? Tireless momentum and the collective imagination of many individuals combined.

The Human Transformation
I linger on the High Line, preferring the vantage of the suspended walkway, fluttering leaves, and playful people and art to the hurry-scurry streets. I stop at a little cart to buy a refreshment. In keeping with the highly curated park experience, it is no mass-manufactured, high-fructose corn syrup concoction with a too-long shelf life. Instead I buy a locally-produced, iced lollypop, with eclectic Mexican-influenced hibiscus-and-chili flavor. It’s delicious.

On my return, I stop and take pictures. Delicate, pointy, spring wildflowers called “shooting star” are bobbing in the breeze. The dogwood trees offer happy white-tongued blossoms on outstretched arms, and the redbud’s purple clusters are turning into leaves. Purple phlox creeps over the iron tracks. 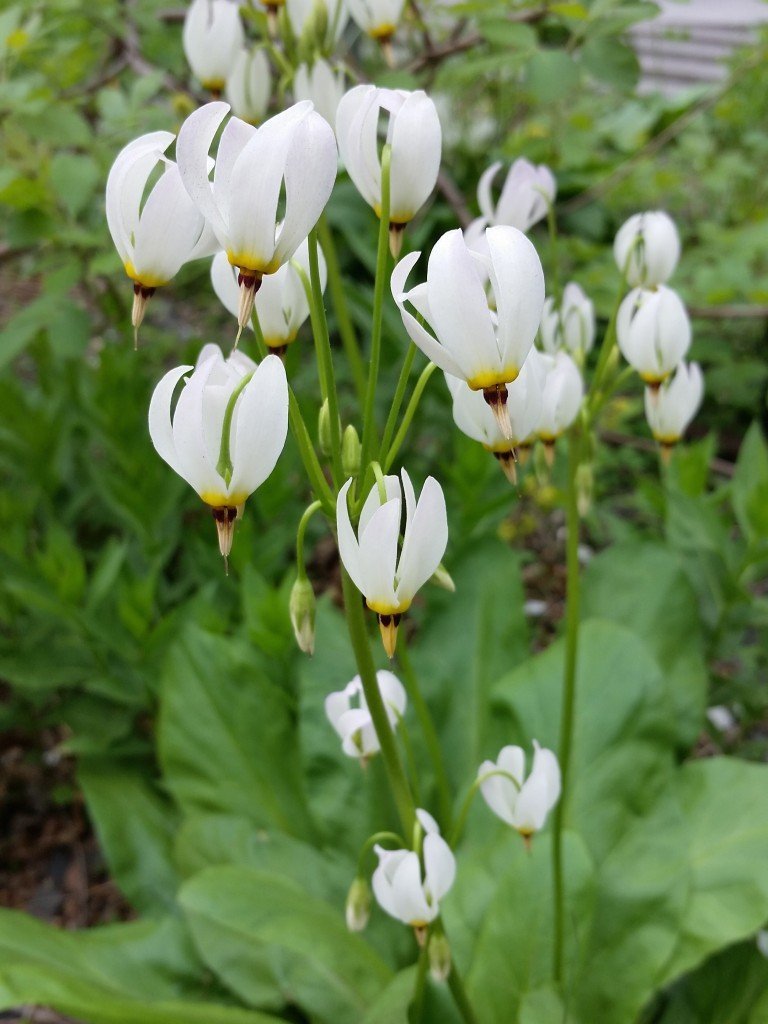 A healthy upright clump of pink flowers catches my eye, and has me racking my brain for appropriate nomenclature: it’s a sage flower, Salvia Eveline. The plants seem all the more delicate juxtaposed against the hard glass, steel, and brick-walled backdrop of the city. 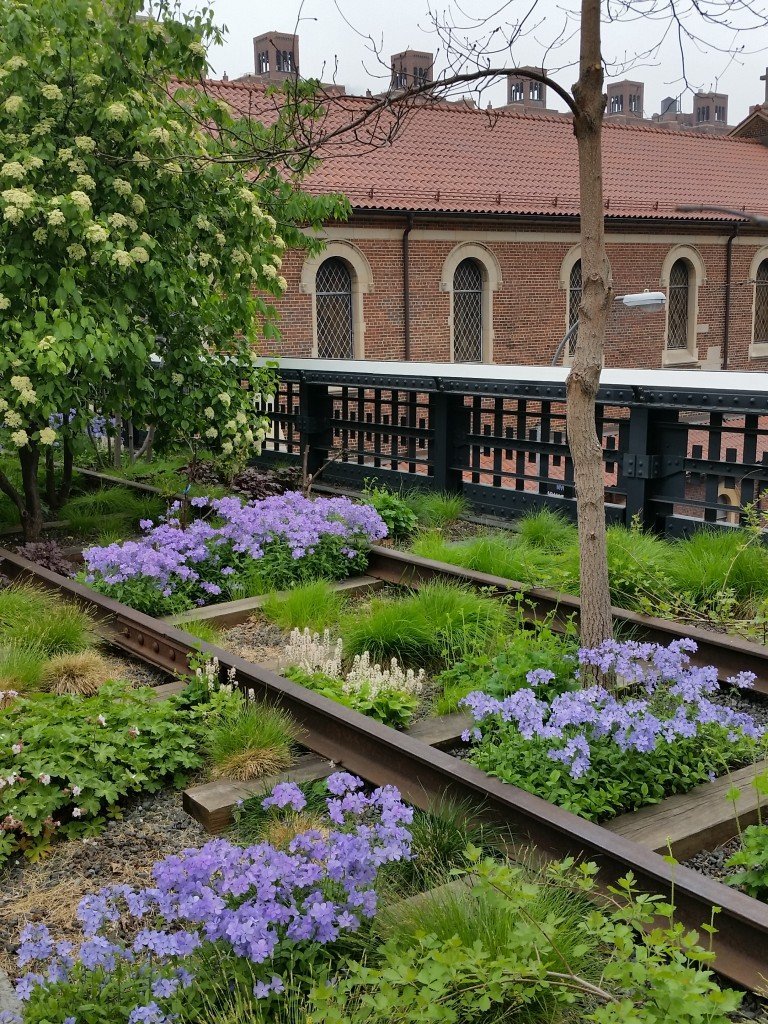 Like me, a six- or seven-year-old child is wielding a cell phone, as his mother looks on indulgently, half-expecting a calamitous phone drop. In the bushes, a bird is rustling about, and calls insistently. Maybe she is scolding her young, or singing with glee at the seeds she’s found. It’s magical and catches the imagination of the child who, if a New Yorker, likely spends only a few minutes a day immersed in bowers and birdcalls. Peering into the bush, he says softly, so as to not scare the bird, “Mo-om, can I take a picture of the bird?” She encourages him. I smile to myself, pleased by the connection between child and song bird.

With nature pushed into the margins of a typical child’s daily experience, the High Line provides a few moments to find a place in the Web of earthly relationships with non-human beings. The child has—and by extension all of us have—a space to find nature both around and within, at a primal, instinctual level. I feel it inside me and it feels like music; a striking chord change resonant against the humdrum tune of a mechanized city. This elevated valley gives us a small but significant space to rediscover our humanity in relationship with nature again.

I’m reminded of David Abram’s words in The Spell of the Sensuous, “…It is all too easy for us to forget our carnal inherence in a more-than-human matrix of sensations and sensibilities. Our bodies have formed themselves in delicate reciprocity with the manifold textures, sounds, and shapes of an animal earth—our eyes have evolved in subtle interaction with other eyes and our ears are attuned by their very structure to the howling of wolves and the honking of geese. To shut ourselves off from these other voices…is to rob our own sense of their integrity, and to rob our minds of their coherence. We are human only in contact, and conviviality, with what is not human.” 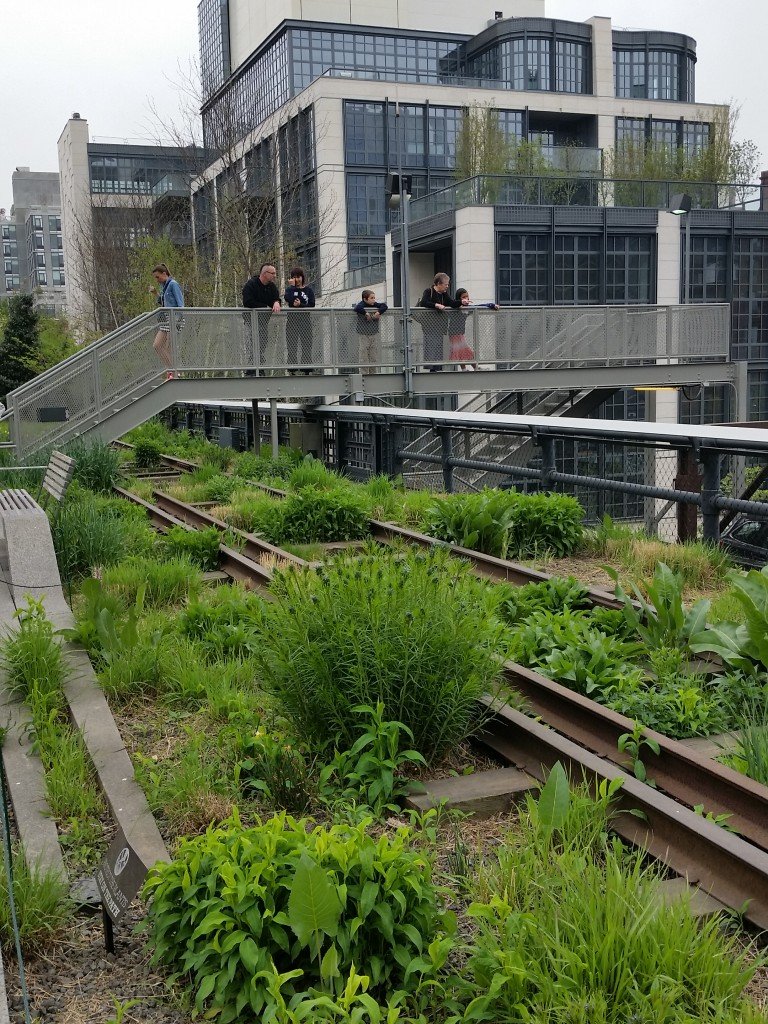 Nature’s Primacy
The plants’ frailty also reminds me, ironically, of how this muscled megalopolis might rapidly regress, were we not there to tend to its drainage, its power supply, and its needs for constant mechanical maintenance. I’m reminded of the book The World Without Us by Alan Weisman. Written as an exercise of imagination about a scenario in which aliens have swept every human being off the planet, the book throws into relief the extent to which human enterprise manages and manipulates our normal surroundings. It imaginatively details how a return to nature might unfold when humans are suddenly spirited away.

One of the book’s case studies of human abandonment is New York City. Weisman vividly describes the rapid onset of subway flooding from groundwater seeping through rocks (failing pump maintenance and power supply). In a matter of weeks, buildings crumble to their steel joints, plants sprout in unlikely places, and eventually tree roots upturn concrete. Wildlife, of various kinds, stages a resurgence. The book reminds us that as much as human history seems like a narrative of technological dominance to shield humanity from nature’s powers and vagaries, it is always just there, lurking in the shadows.

A plaque I saw recounting the history of the High Line refers to exactly this: “By 1980, the trains had stopped running. What remained of the High Line, from Gansevoort Street to 34th Street, was slowly taken over by a self-sown landscape, showing the power of nature to conquer even monumental, man-made structures.” An ironic twist, indeed, that humans wrested the rail tracks back from nature to create an intentionally designed encounter with nature. In this global megacity, emblematic of human preeminence on the planet, the High Line is a poignant reminder that were we to ever lose our tenuous compact with the planet–tamed through steel, ingenuity, and silicon– nature would reclaim it. 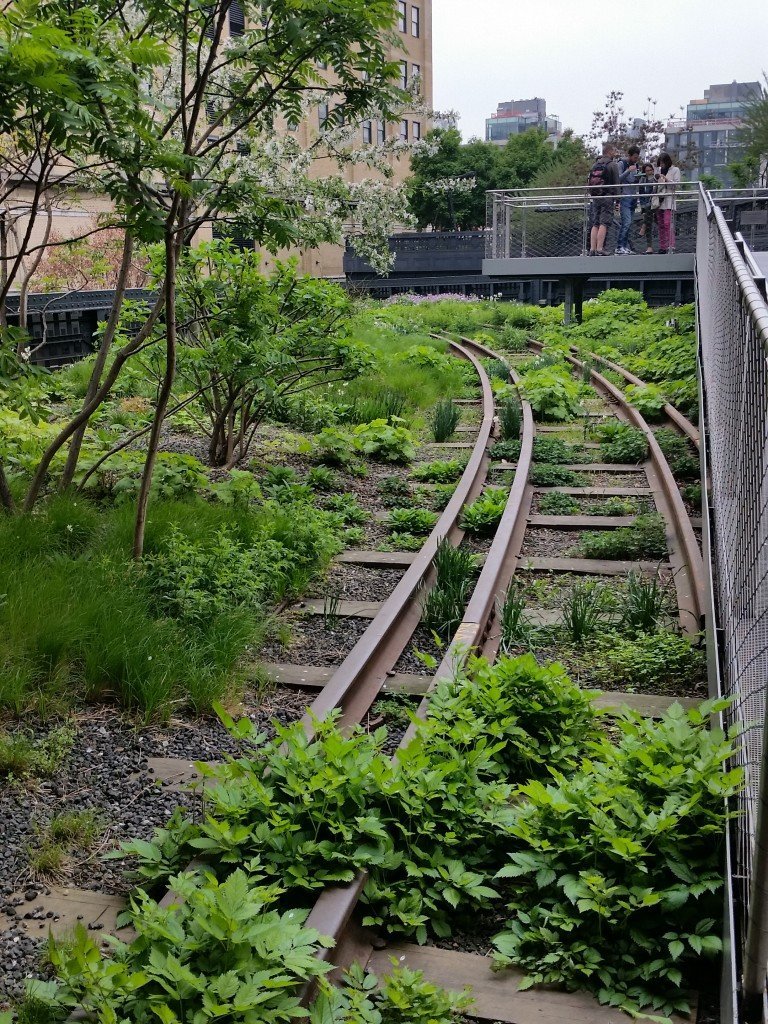 All photographs by Ansu John