The Many Dilemmas of a Practicing Scientist 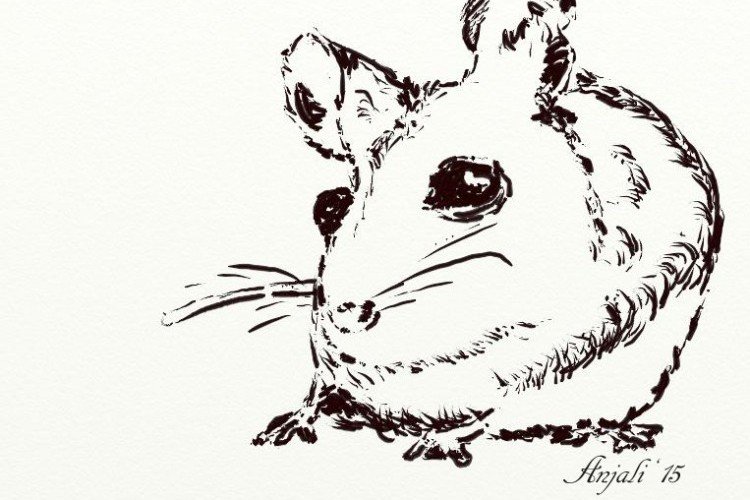 Stagnating in the bumper-to-bumper traffic on Georgia Avenue, I see a poster on the back of a Ride On Bus that denounces animal research. I avert my eyes. I try to focus on my pranayama practice and breathe deeply from the diaphragm. The rubber mouse on the dashboard springs to the rhythm of the idling engine, indifferent to the dilemmas that plague me.

Respect for life—all forms of life, from the ant to the elephant—is a tenet so ingrained in the Indian way of life in which I grew up that it is probably only rivaled by the reverence for knowledge and enlightenment. I have been practicing yoga for as long as I can recall. In an age that encourages laser-sharp focus and specialization as an antidote for failure, I am a contented generalist—a scientist, a poet, a yogi. I am generally not a person of many words and when asked as to how such diverse facets can co-exist in the same person, I rely heavily on E.O. Wilson’s understanding of consilience.

With the passage of time my interest in yoga has graduated from a mere technique of physical strength and relaxation to a path of self-realization. Rather than dampening my enthusiasm for yoga, migrating from India to the United States in my late twenties further stimulated my practice, from more than just a daily ritual to a means of holding on to my roots. Reading ancient Indian texts on yoga, it is not long before one encounters the yoga sutras of Patanjali, deemed to be the foundation of the traditional eightfold path of yoga. Ahimsa or non-violence constitutes one of the first steps on the path.

How then is the yogi-scientist to reconcile the sacrifice of animals, which is part of my career in scientific research, with the pursuit of knowledge? Indian philosophy is a rich ocean of wisdom and, while blundering through its many treasures, the Bhagavad Gita has been a source of relief for my confused mind. In this epic poem, when Arjun lays down his arms and refuses to wage war against his own kin in the pursuit of truth and justice, Krishna, his divine charioteer, convinces him with reasoning that I find applicable to the yogi-scientist stationed on the fulcrum of non-violence and knowledge. 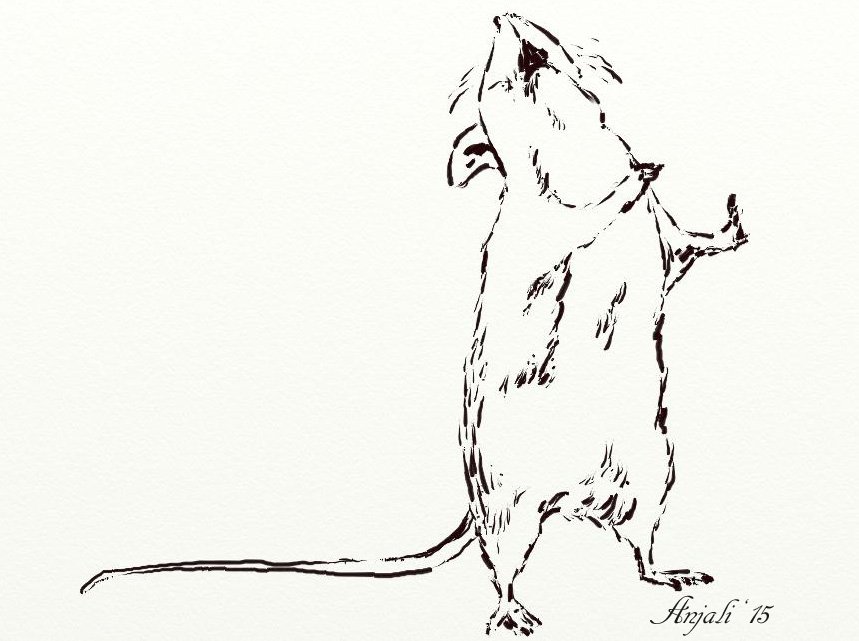 Every action presents consequences both painful and pleasurable, both noble and despicable. The person who is equally unattached to pain and pleasure, to happiness and sorrow, who is content under all circumstances begins to rise above illusions one might otherwise perceive as truth. The scientist, at least the kind I am, is not a heartless bastard who sacrifices animals for pleasure. The scientist in me is a yogi, a poet, a compassionate soul who weighs and considers not only the pathos of sacrificing animals in the pursuit of knowledge but the pathos that the attainment of that knowledge can ameliorate in millions of humans and other animals.

The repository of scientific articles at the National Institute of Health’s online portal PubMed, as of May 29, 2015, has 1,312,702 research articles that involve studies on mice. This offers an idea about how common the use of mice is in biological research. The sacrifice of mice and other model organisms is necessary to the pursuit of knowledge in biological research. The noble goal of this knowledge is the eradication of disease and pain in future generations of humans and other animals. 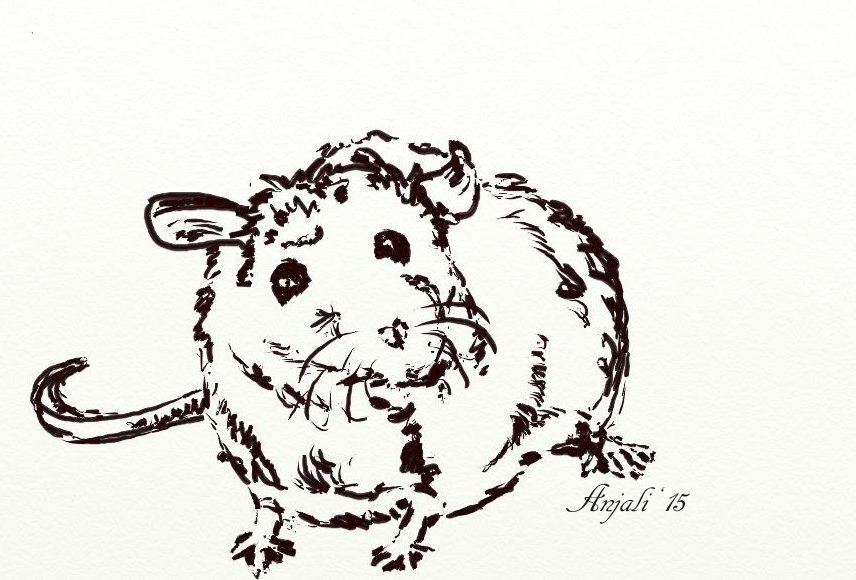 Some refuse to acknowledge, or worse still, belittle, the depth of human desire in pursuit of the unknown, demanding that Nature in its benign virtuosity and benevolence supply answers to whosoever finds a spare moment to ask, at no cost whatsoever. However, the philosopher and particularly the practicing scientist recognize that Nature, though at times beautiful, is far from benign; that every answer worthy of a question takes a lifetime of labor and an incalculable price.

Unlike what it may appear to be on its surface, the poem “Curiosity that killed the mouse” is not a denouncement of animal research. Instead it is an expression of reverence and gratitude from one animal to another. It is a call to minimize animal sacrifice wherever possible. It is a recognition of the need for kindness in the wake of inevitable and necessary sacrifice. It is an acknowledgement of spasms of guilt and doubt in spite of reason. It is a celebration of the natural and universal instinct of curiosity, which resonates as tremulously in the human as in the mouse.

Curiosity that killed the mouse

It was my turn to sacrifice mice
in the caged room in the basement
of the university. There, on the metal
table, the plastic box lay lidless,
filled with sawdust, sterile bedding
and a flock of five drugged mutant mice
that were no longer of use to the lab
alive. The dial on the gas cylinder
measured humane euthanasia while
I stood by waiting for the mice to die
so that I could slit their bellies for babies
and clues for questions unanswered.

At the dinner table, mouthing things
we did not mean, we ate steak
and talked about being kind to all.
Mice were not included, being pests.
Besides, dying for science was a noble
goal even mice should aspire to.
But while I ate, I kept thinking
of the dead mice and their stock who
did not die in cages, who scurried all day
through miniscule tunnels under homes
and fields, under rocks and overgrown logs,
in endless labyrinths, too complex for the
human mind. Nothing was too tough for
their teeth and the grit in their ten-cent
hearts—the world of discarded objects,
a mouse heaven.

Next time, holding its body perfectly still
and sterilized before the scissor’s first cut,
I watched those liquid eyes. How invincible
it must have felt shredding through compact
earth to satisfy its endless quests that
loomed beyond brittle blocks. 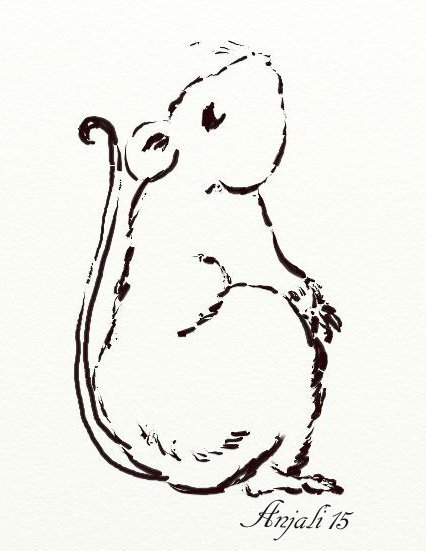